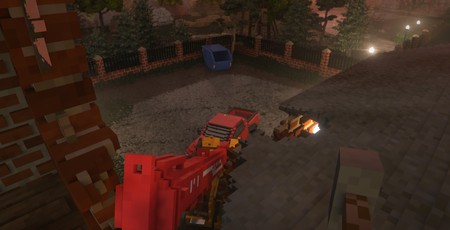 Teardown is a prime example of how technology is nothing without design. This knockabout heist-simulator is powered by a fantastic Voxel engine that makes the game’s environments entirely destructible. Walls, windows, rooftops, even vehicles can shatter into innumerable pieces when the right amount of force is applied. Yet although this engine makes Teardown possible, it isn’t what makes the game special. Teardown puts you in the role of a down-on-his luck building contractor who, desperate for cash, takes on a moonlighting job to destroy an old listed building in the dead of night. This slowly leads him into a life of increasingly daring and dangerous criminal capers, using his demolition skills to break into secure facilities and run off with all manner of items.

Each mission takes place in a largeish, open-ended level built from completely destructible voxels. A wall in Teardown is simply a stubborn door, while a window might as well not bother showing up for all the resistance it offers to your burgling builder. The game’s first level is a pure destruction sandbox, handing you a dilapidated old house and asking you to demolish it. You’re equipped with a sledgehammer, a spray can, and a fire extinguisher, none of which are particularly useful for more extensive destruction. However, the surrounding area is liberally scattered with large, heavy construction vehicles and highly explosive propane tanks. With these tools in hand, it won’t take you long to fashion a pile of rubble out of that lovely period building.

The destruction tech is impressive, with walls breaking and crumbling in a way not seen since the days of Red Faction: Guerrilla. But it’s also hard to see how Teardown will make a game out of it. After all, stealing stuff isn’t going to be very challenging if you can blow through any wall like it’s made of butter. This is where design comes it, whereby Teardown forces you to use its explosives and giant machines less like wrecking balls and more like scalpels. The results are as brilliant as they are absurd. As you progress into Teardown’s campaign, the people at the business end of your smash ‘n’ grab tactics begin to become savvy to them, responding by installing security systems. Sometimes it’s just a fire-safety system that’ll sound alarms if your crimes inadvertently evolve from burglary to arson. But the real cherry on Teardown’s rubbly cake is its burglar alarms. If you remove any item wired to a burglar alarm, it will sound, at which point you have just one minute to complete your remaining objectives and flee the scene.

With this simple rule, Teardown transforms its madcap sandboxes into highly open ended yet beautifully challenging puzzles. An early example requires you to remove three objects from different points on the map, any one of which will set off the burglar alarm. There isn’t enough time to weave around the building grabbing each one, so you instead have to create a pathway that lets you grab your prizes in the most efficient way possible. It isn’t just about breaking down walls either. You can use the game’s bulldozers and mobile cranes to create ramps and platforms, creating an elaborate pathway through corridors, along gantries, and across rooftops. From here, the heists become equal parts more ambitious and more absurd. In the following mission, you need to retrieve some documents from a safe in a yacht marina. You can’t actually crack the safe yourself, but with the help of a nearby crane, you can take the whole safe with you. The increasingly elaborate puzzles mean that things can go awry easily, but the ability to quicksave whenever you like alleviates much of the potential frustration.

Although Teardown only just launched into early access, it’s in decent shape. There’s a healthy number of missions (although I would be happy to see more), while the sprinkling of story told through computer chats and TV news broadcasts lends the right amount of structure to your destruction. There’s also a fully functional upgrade and equipment system. New tools are unlocked over time, like a blowtorch and remotely-detonated explosives, while individual tools can be upgraded with cash earned by nicking additional items during your heist (this, incidentally, also gives you reason to properly explore each location, another smart design touch by the developers). It also looks splendid. Voxel art doesn’t get enough of an airing in gaming. Teardown does a fantastic job of using it to create a specific style, while also packing in a huge amount of detail. There is one issue, however, which is that it is that currently Teardown is not particularly well optimised. Playing at 4K on a 2080 Super, I noticed considerable slowdown when turning my character, likely a consequence of the game loading in assets that had been occluded from the pipeline. No doubt this issue will be fixed by the time the game his v 1.0, but be aware going in that the game is somewhat more technically demanding than it looks.

Teardown is already one of the most unique and smartly thought out games to come out this year, and should its development continue to improve the experience, I fully expect it to be busting into everyone’s GOTY lists in 2021, leaving behind a smouldering pile of rubble as it runs off with all the prizes.