The Light Keeps Us Safe Preview 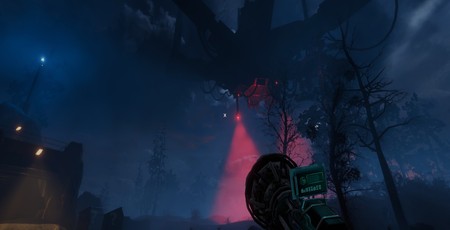 Don’t be suckered in by the title of Big Robot’s latest open-world adventure. The light may keep you safe in the right circumstances, but it’s equally good at getting you killed. There are many different lights in The Light Keeps Us Safe. White lights, for example, are good, nice lights, the kind of light you could take home to meet your mum. Yellow lights, on the other hand, are very, very bad. If you see a yellow light in The Light Keeps Us Safe, either hide immediately, or prepare to run. This is where I went wrong. When I emerged into the third of The Light Keeps Us Safe’s currently available environments, I immediately spotted a vast structure teetering on the horizon. Its towers resembled the clawed legs of a dead spider, while two beady red searchlight flickered near its base. It looked thoroughly dangerous and uninviting, which is precisely why I assumed that there must be plenty of goodies hidden inside. As I approached the building, however, I noticed two unusual qualities about it. Firstly, it was floating, and secondly it appeared to be moving toward me. That’s when I realised it wasn't a building at all, but a ship, a giant, robotic hovercraft that was much nearer to me than I had previously thought. Just as I realised this, the red lights turned yellow, and moments later I was extremely dead.

The Light Keeps Us Safe is nominally a survival affair, but in practice it plays more like an old-fashioned stealth game. It blends a Thief-like atmosphere with a S.T.A.L.K.E.R-inspired structure, in a setting reminiscent of War of the Worlds. The premise is that the sky has gone out and the world has been overtaken by hordes of killer robots. Why either of these things has happened, or whether they are connected, is not initially divulged. All you know is what a Scottish lady tells you via a crackly radio connection, namely that the bunker you’re holed-up in is running out of both food and power, and to stay alive you need to move to a new safe location. Standing between you and that goal, however, is a small army of murderous robots, so you’re going to have to prepare yourself before making that final move.

Such preparation revolves around your modular torch, the one tool in your arsenal you can use against the robots. At the outset of the game, it is literally just a light-source, but its beam can freeze smaller robots in place. As you progress, however, the torch can be upgraded to serve a variety of different functions, such as a focussed laser that shorts out other kinds of robots, to a special blacklight that reveals invisible structures and enemies. To upgrade your torch, you need to venture out into the game’s dark and silent wilderness, collecting machine parts from the handful of mechanical devices lying around that don’t want to wring the oil from your flayed skin. Typically, these machines are located in heavily-guarded buildings watched by Bioshock-like cameras that change colour when they spot you, and patrolled by strange orbs that emit a deafening bass drone as they hover around.

Indeed, light may be the focus of The Lights Keeps Us Safe, but it’s the audio that truly defines the atmosphere. It’s also where the comparison to Thief is most apt. The soundscape is entirely generated by the sounds the robots make, which is a Brosian nightmare of mechanical shrieks, drones, and whirrs. When you’re hiding near a cluster of different robots the environment sounds like a call-centre from hell. This, combined with the oppressive blacks and greys of the environment design, combine to create an atmosphere of gnawing dread. Big Robot want to keep you in this atmosphere for as long as possible. One of the game’s smartest design decisions is to minimise subsidiary mechanics. Survival amounts to rummaging through bins, cupboards, and drawers for food to maintain energy and medical supplies to keep yourself from dying. There’s also no crafting system. Big Robot smartly deduces that finding useful things is more conducive to tension in a game like this than making them yourself, although one could reasonably argue that at the moment there isn’t enough interesting stuff to find.

As an Early Access game, the core of the Light Keeps Us Safe is robust enough. Having to stand in bright lights to avoid being attacked feels suitably unnatural when you do it. I also like how getting into buildings that contain important items has a puzzling element to it, where you need to figure out how to disable cameras and force-fields on doors. The idea of having hidden structures that you need to reveal with a special kind of light is also very cool, and the exact kind of weirdness that Big Robot does so well. There are some problems, however. Foremost amongst these is the procedural generation, which currently produces levels that have a distinctly “Unity asset-flip” feel to them - samey-looking buildings located in unnatural feeling places. After the hand-crafted beauty of the Signal From Tolva, the proc-genned levels currently feel like a marked step back. The game also needs a much greater breadth of building type, and also more variation in the challenges that lurk inside those buildings.

Another issue is the storytelling. Currently, the story is unveiled through the collection of “motes”, little sparks of light in the world that, when you pick up enough of them, reveal a fragment of story. It’s a very artificial way of delivering story, and I’d like to see these little snippets of narrative baked into the world in a more coherent and believable way. All that being said, the potential in the Light Keeps Us Safe is clear even at this very early stage. When you’re hunkered down in a building with some lumbering, shrieking bot searching for you outside, it’s fantastically tense. If Big Robot can build on these foundations, making its robots stranger and nastier, and its world a little more coherent, then it could be on to a winner.