They Are Billions Preview 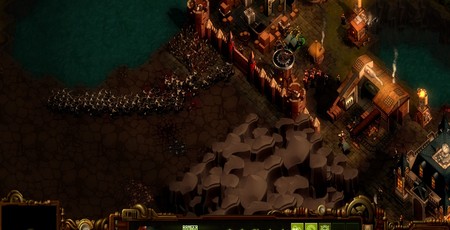 An alarm sounds when they come. Sometimes from the North, sometimes from the West. Always in droves. A skull icon appears on the minimap, edging ever closer to your settlement, already struggling to survive in this scorched and blasted wilderness. When they arrive they pour themselves against the walls, smashing down your spike traps with the weight of their own flesh. Your settlers fire everything they have - arrows, shotgun pellets, sniper fire. After what seems like an eternity, eventually the horde is whittled down to nothing. But you know the next horde will be bigger still, and it might be the last you face. Such is the cycle of They Are Billions, a survival RTS that launched at the end of last year and became astonishingly successful in a ridiculously short space of time (despite having a name dumber than a billion zombies). It's a game that I'm simultaneously impressed and appalled by, one that unashamedly piggybacks upon current trends to appeal to the widest demographic possible, but one which is also annoyingly, perhaps even worryingly, compulsive to play.

The premise is basically Age of Empires with zombies. You start out with a central headquarters and a handful of soldiers, and from here you must construct a settlement that can sustain itself while defending it from waves of undead. These waves gradually increase in both their size and ferocity, so you need to construct larger and more elaborate defences as time goes on. The problem is, of course, that more elaborate defences are more expensive to construct and require more workers to sustain. This means you need to make your settlement larger, which in turn requires you to harvest more food, gather more resources, and produce more energy. Supporting this infrastructure requires yet more workers and thus an even bigger settlement. Hence They Are Billions is as much about managing a sustainable economy as it is constructing big walls and manning them with snipers.

What I like about They Are Billion is how it flips the traditional progression of the RTS genre on its head. In games like Age of Empires, your goal is to build a successful civilisation but also to ultimately to bring fire and sword to others. You're an invader and a conqueror, constantly on the lookout for the next city to raze. In They Are Billions, you're the defender by default, and instead the emphasis is on figuring out how to keep your citizens alive rather than how to kill somebody else's. The focus on defence also kindles fond memories of games like Stronghold. There's something innately enjoyable about building a defence that maintains itself as much as possible, using the natural rock-formations and sequences of walls to funnel and thin-out oncoming enemy hordes, gradually replacing your wooden walls with stone, figuring out the optimum sniper placement so that they cover one another's blind-spots. You will dispatch small parties from your settlement to gather resources and clear out gaggles of zombies around the map, but the only army you're building here is a defensive one.

When the zombies come, the game switches gear from juggling your economy and careful expansion to a singular focus on survival. Zombie hordes flow and boil over your defences like a tsunami (indeed, the hordes are clearly designed around some form of fluid dynamic simulation). Combat isn't particularly tactical – all the strategy happens in the preparation. When fighting erupts, it's mostly a case of piling as many defenders to the combat zone as possible, and hoping that they, along with your defences, will hold the line. There's no question that They are Billions is an engaging game; its mechanical hooks embed themselves quickly and deep. As for whether it's a good game, the jury remains out. For starters, They Are Billions has little of its own personality. In aesthetic it seems almost slavishly adherent to the Age of Empires style, right down to the fixed camera, while the steampunk setting has little flavour to it. Fantasy-esque archers happily co-exist alongside shotgun-toting Doomguys and steam-powered mechs. It's as if the developers pinned a bunch of potential settings to a dartboard and the darts landed on steampunk.

The difficulty balancing is also an issue. I found that in the vanilla mode (challenging), I struggled to survive the first wave of zombies, as there's simply not enough time to prepare your defences before that initial horde strikes. Turn the difficulty down a notch, however, and the game becomes much too easy. In fairness, They Are Billions offers quite a lot of difficulty variables, but they all seem to land on either side of that sweet spot, and consequently I think some tuning is in order. My biggest concern, however, links back to the issue regarding the art. Currently, They Are Billions lacks much in the way of a soul. The whole zombies plus survival plus steampunk concept feels like game design by focus group, while the entire experience amounts to one gigantic feedback loop offering little that's meaningful or distinctive. It's a cleverly designed Skinner Box, but currently that's all it is. Developer Numantian Games is currently working on a campaign mode it plans to add in the spring, but I struggle to see how that's going to fundamentally alter or deepen the experience beyond what currently exists.

All that being said, I am glad to see an RTS back in the Steam charts. It's been a long time since an RTS challenged the Total War/Dawn of War carousel that wasn't Clash of Clans or another nondescript Facebook game. But I worry that, without some more personality and tailoring, They Are Billions could end up as little more than a Facebook game with better technology.