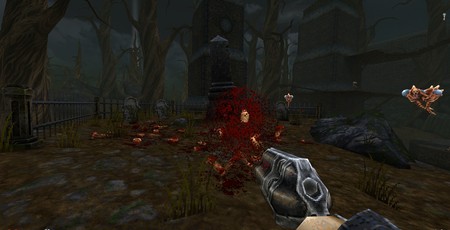 Wrath: Aeon of Ruin might be the closest thing Quake has ever had to a sequel. You might think I’ve forgotten about Quakes II, III and IV, but I haven’t. Let’s be honest, Quake II was a sequel to Quake in name only. It had a different style, a different pace, a different tone, and if memory serves me correctly, was intended to be a different game entirely before id decided to stick the Quake license on it. Quake III was an even more divergent with its pure multiplayer focus, and Quake IV was a sequel to Quake II. When I say a sequel to Quake, I mean a game that embraces the spirit and style of id’s classic FPS. The lightning pace, the grungy tone, the abstracted Gothicism of its level design. That’s the game that Wrath aims to be, and from what I’ve played of it so far, it might just pull that off.

Like other retro-FPS’ such as Dusk, Amid Evil, and Ion Fury, Wrath aims to bring back the severed head of the nineties and toss it into your lap for you to play with. But not only is Wrath inspired by shooters of yore, it’s actually built with a supercharged version of the original Quake engine. Wrath takes place in a dank and dismal world called Mourningvale, casting you as a typically nameless hero tasked with annihilating the evil forces that haunt this wretched place. The current Early Access version of Wrath lets players explore the first two levels of the game, as well as poke around the sizeable hub-world that connects the various levels together.

That may not sound like much content, but Wrath’s levels are much, much bigger than those of the original Quake. Each level features a sprawling overworld with looming, elaborate architecture, while twisting warrens of tunnels, dungeons, sewers and cave networks are concealed beneath. The first level, named the Mire, is a swampy wetland watched over by gnarled and ancient trees. The second, known as the Overcrofts, it a gigantic necropolis with tombs and mausoleums dusted by snow. Both levels are crammed full of secrets, alternate pathways, and openly explorable arenas that push the Quake engine to its limits. Each level took me the best part of an hour to complete, and that’s purely in an attempt to find the end, without stopping to search for secrets or other paths that weren’t immediately obvious. As well as being geometrically impressive, they also look great. Lots of work has gone into moulding and painting the world to make the best of the ageing tech.

Good level design alone does not make a great shooter, of course. You also need things to shoot, and things to shoot with. Again, Wrath is shaping up well on both fronts. Developer KillPixel games has clearly thought hard about how to give Wrath’s weapons their own distinctive flavour. You start out with a mounted arm-blade that can slice enemies to ribbons and propel you forward with a powerful stab, which also makes it useful for leaping across large gaps. Shortly after that, you pick up the coach-gun, a three-chambered revolving pistol that’s surprisingly powerful for a starting gun, boasting a mean secondary fire. But the highlights of Wrath’s arsenal (so far anyway) are the shotgun and the fang-spitter. The former immediately became my staple weapon, a pitch-perfect boomstick with the ideal combination of range, power, and a kick like a pneumatic kangaroo. The fang-spitter, meanwhile, is Wrath’s equivalent of the chain-gun, only it shoots actual teeth and has a ferocious alt-fire that blasts pairs of fangs at your enemy like a World-War II flak cannon.

These satisfying weapons are coupled with enemies that work almost as hard at dying spectacularly as they do trying to kill you. Every enemy you encounter seems to be just waiting to burst, disintegrate or otherwise collapse into a pile of meaty gibs for your entertainment. The starting zombies are pure cannon fodder, losing limbs in the same way that I lose earbud headphones. But they’re nothing compared to the toxic enemies who through balls of green slime at you. Blasting these goons with a shotgun causes them to explode, showering the area with blood and bile. Filtered amongst these walking bags of goo are more dangerous and frightening opponents, such the floating Cerberus-like dogs with mouths like a cutlery drawer, and a horrible scuttling undead critter that you’ll regularly mistake for a slow zombie before realising that, oh God, it isn’t. I’ve little doubt that Wrath is going to be a good, possibly great FPS. But I do have a couple of issues, and some reservations. Firstly, I’m not a fan of the save-system, which is similar to the save crystals of Tomb Raider 3. You collect saves as you go and consume them whenever you use them. It’s not massively intrusive, but I don’t see what’s wrong with letting players save their game as they please. Don’t police my ability to walk away from the computer when I need to.

Beyond that, while I love most of the weapons, I found the Retcher, a gun that fires bile, to be far too powerful and not especially fun to wield. The early levels also lean quite heavily on floating enemies, and while they’re more fun to fight than most floating enemies in other FPS’, they’re still less enjoyable than the terrestrial foes. Most of this is easily fixable between now and when Wrath launches, which is supposed to be later this year. The final game is rumoured to be shipping with 15 levels in total, and if they’re anything like the size and complexity of those on show in Early Access, I reckon Wrath could be very special indeed.