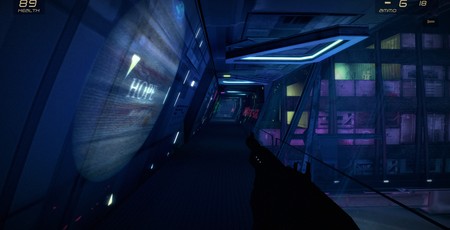 Platform: PC
If you’re waiting on the launch of Cyberpunk 2077, but can’t bear the thought of another delay without getting some retrofuturist action, then I might have a remedy for you. Step forward G-String! No, bit-tech hasn’t pivoted into reviewing underwear. G-String is in fact one of the more interesting shooters I’ve played this year. 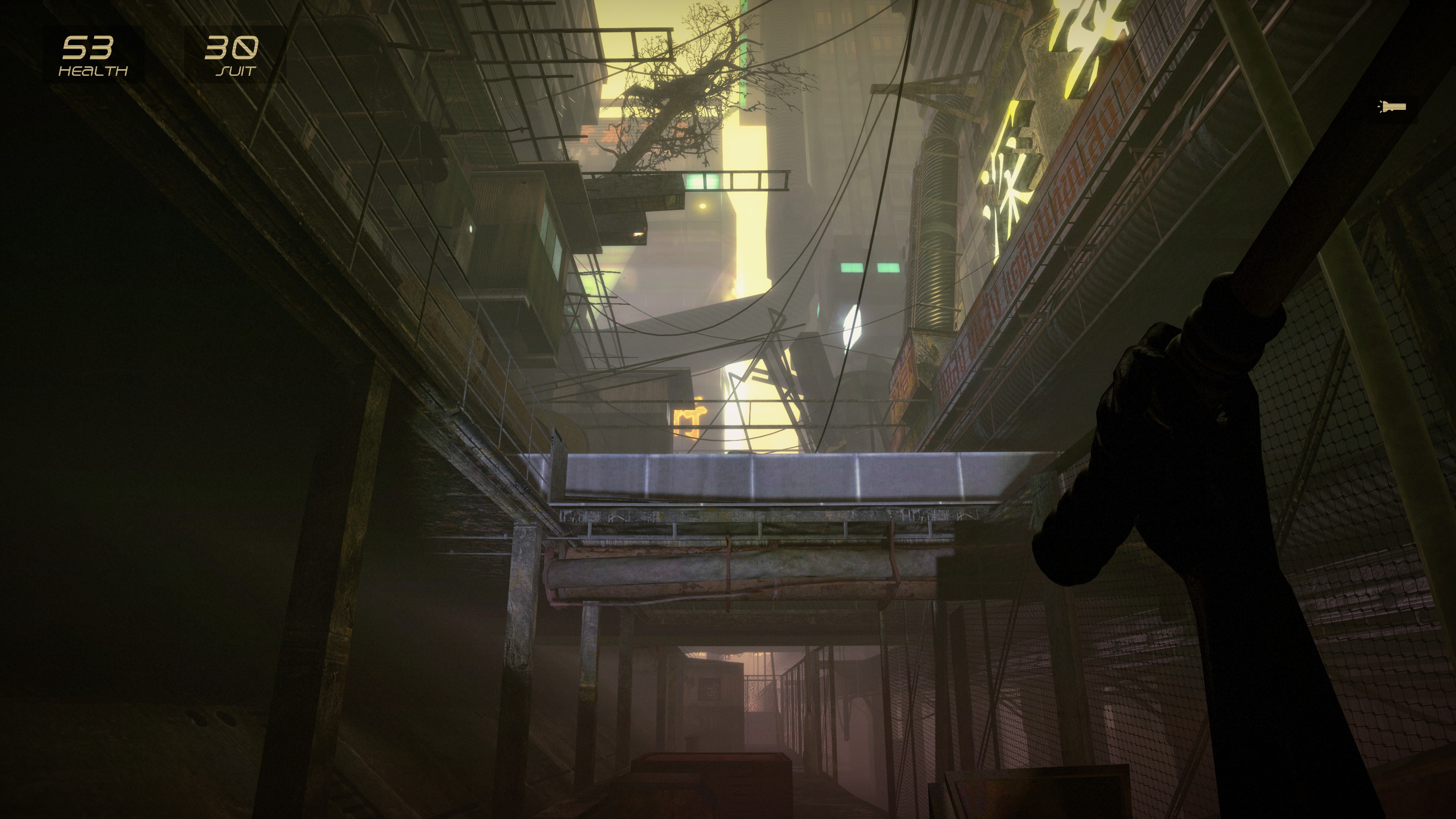 Indeed, the pitch for G-String is almost as strange as its name. It’s a cyberpunk FPS developed in the ye-olde Source engine, created by a single developer over a whopping twelve years. If you happen to be a fan of Source mods, you may be aware of G-String as a total conversion for Half-Life 2. Well, this G-String is not that G-String. This is a massively expanded retail version of the game, available to buy on Steam for about the same price as ordering a McDonald’s via Uber Eats.
G-String puts you in the role of Myo Hyori, an eighteen-year-old girl who also happens to be an experimental supersoldier owned by your friendly neighbourhood cyberpunk megacorp. In the opening sequence, Myo escapes from her holding pod after the building she’s held captive in is destroyed by falling space debris. Fleeing the scene, Myo embarks on a journey across the game’s dystopian North American cityscape, all while several organisations, each with their own agenda, attempts to apprehend her. 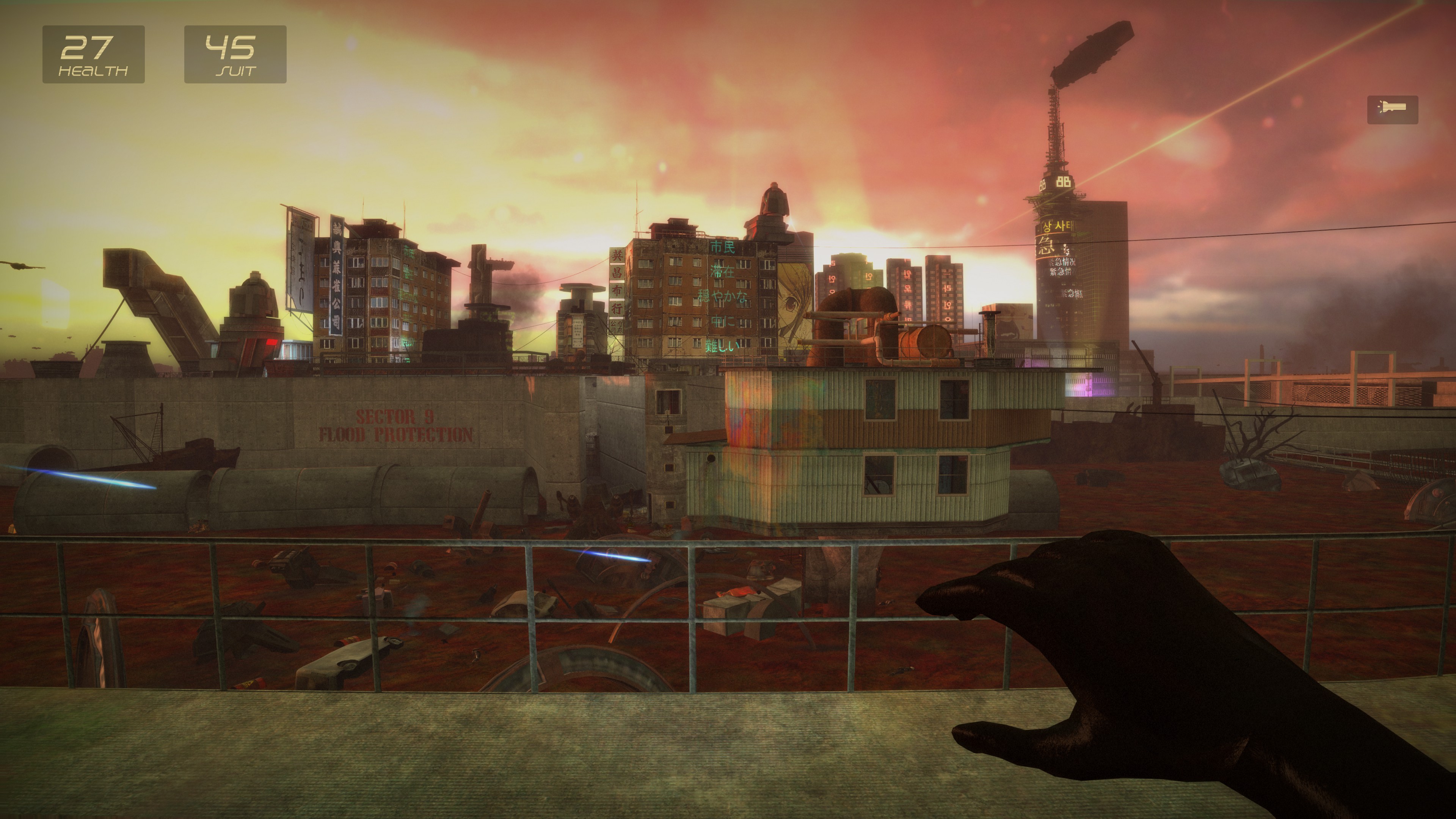 In terms of play, G-String is understandably similar to Half-Life 2. Weapons and enemies are mostly re-skinned versions of HL2 opponents, and the core combat is a more roughshod version of Valve’s classic sequel. It’s a functional shooter, although one that feels rather static in the wake of games like Doom Eternal, and could probably do with combat being more free-flowing, less reliant on enemies ambushing the player.
Yet while G-String is technically an FPS, that isn’t really the main attraction. Instead, that would be exploring its stupendously ambitious Cyberpunk cityscape. Given it’s developed by a single person, the scale of G-String is colossal. The game is divided into fifteen chapters, most of which will take you at least an hour to complete, making it slightly longer than Half Life 2. 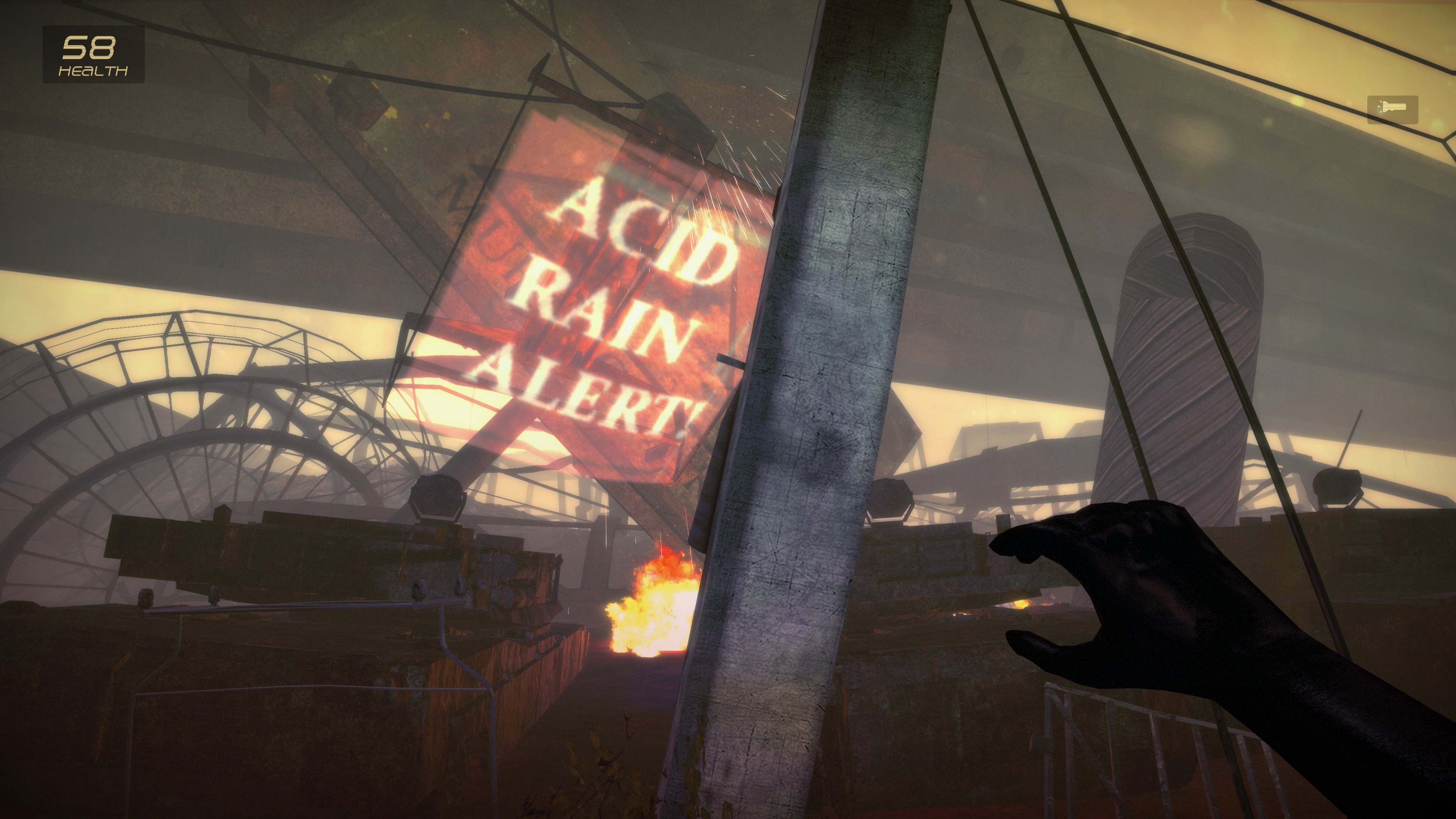 It isn’t merely the size of G-String that impresses, the quality and variety of its levels and set-pieces is often breath-taking. Its urban environments are densely packed with detail, using neon holograms alongside detailed textures and images to compensate for the Source engine’s rudimentary geometry. Missions range from infiltrating a robot ghetto run by a rogue wargaming AI, to storming a giant, Blade-Runner-esque pyramid that serves as the city’s chief air-recycling plant. The game even ventures off Earth entirely, taking you into space twice. Perhaps my favourite part of the game involves sneaking aboard a transport ship bound for Mars, then fighting inside that ship in Zero-G when it is attacked by unknown assailants.
Considering it’s built on fifteen-year-old engine tech, G-String eye for spectacle is truly impressive. Admittedly, it isn’t as good-looking as Black Mesa, particularly the astonishing Xen sections. Then again, it isn’t meant to be. See, G-String is as much a horror game as it is Cyberpunk, one that goes deep on exploring the crushingly oppressive boot of its hypercapitalist society, and the end consequences of that. 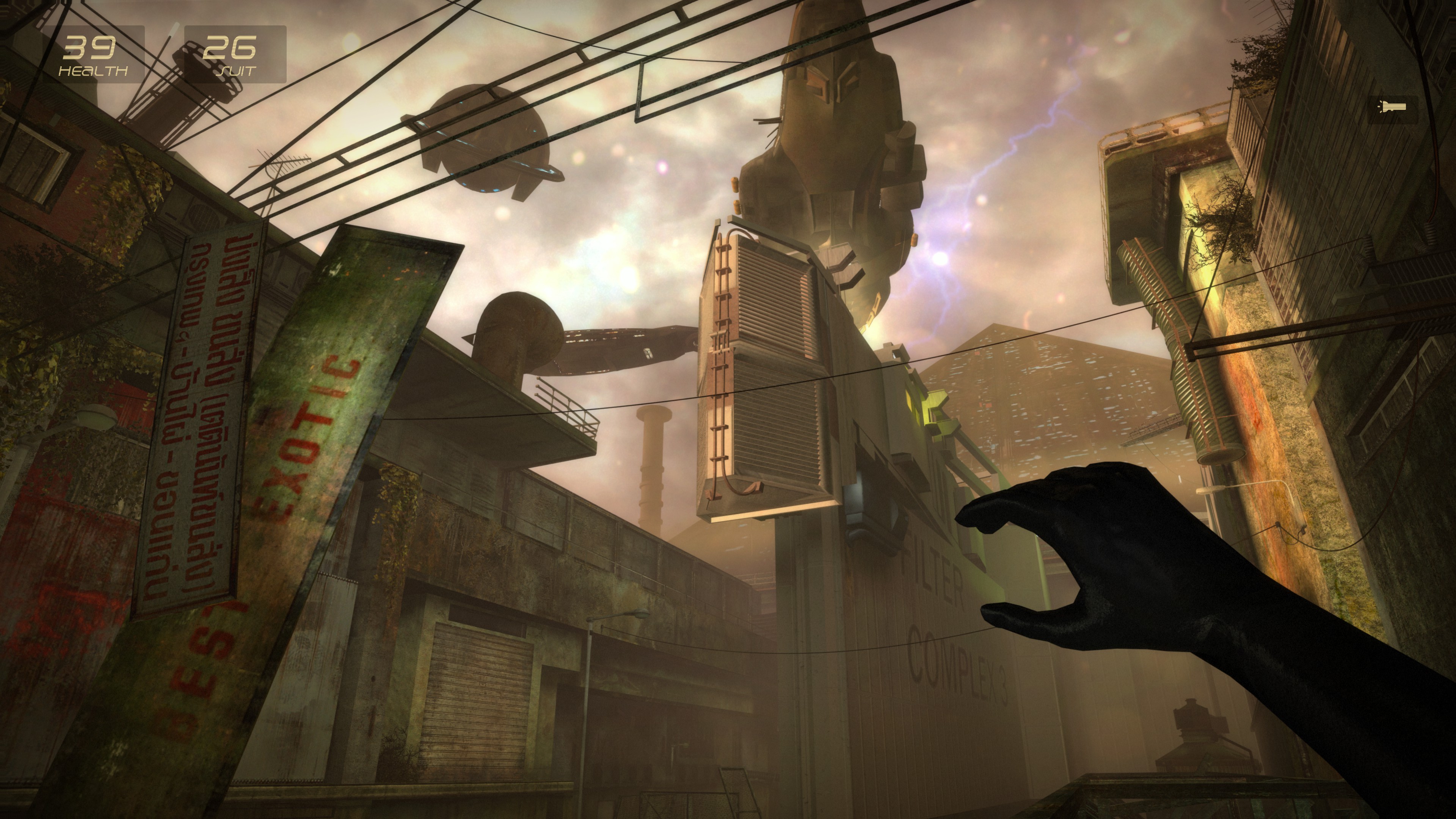 G-String’s city isn’t merely oppressive, it’s falling apart, obliterated from above by falling space debris, from below by terrorist bombings, and from ground level by military bombardments in response to those terrorist bombings. Even the climate is openly hostile, with the city battered by both a hurricane and a tsunami during the course of your adventure.
Consequently, the city surface is basically inhospitable, so much of your time is spend exploring the city’s undercarriage, storm drains and sewers and subterranean tunnel networks. Here’s you’ll encounter the desperate and disturbing remnants of the game’s dehumanising society, ranging from malfunctioning sex androids that skitter along the ground at you, to terrifying slug monsters that can kill you in a couple of hits. The underground is littered with the scattered carcasses of discarded robots, while the few humans writhe on soiled mattresses as they struggle to breathe the city’s toxic air. It’s profoundly unpleasant, and while not explicitly scary, there were times when G-String genuinely unnerved me. 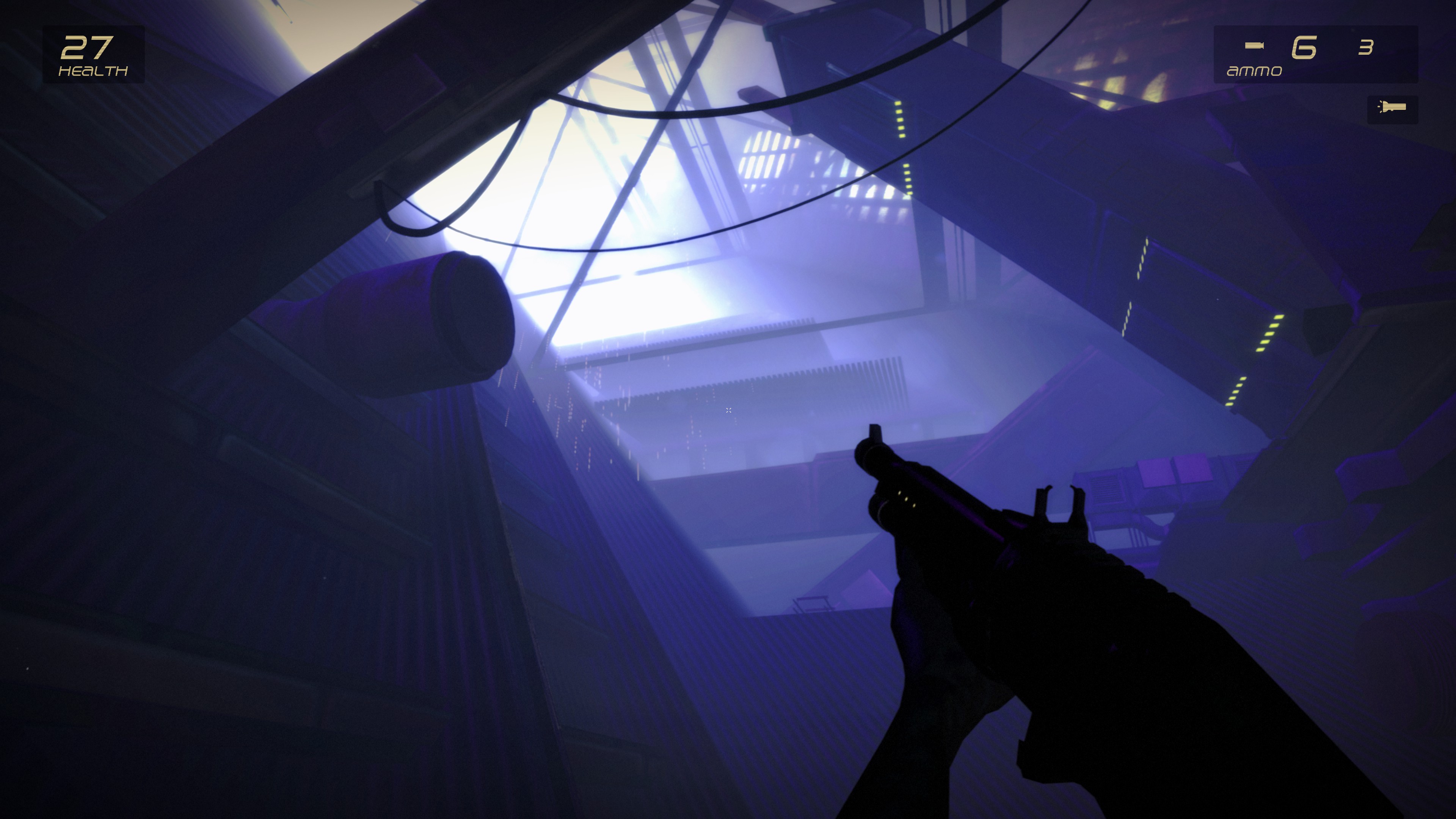 G-String is as much about exploration as it is combat, with a strong emphasis on navigation and environmental puzzling. Given the combat can’t quite cut it with modern games, this mostly works in its favour. But G-String tends to go overboard in its puzzle design, with several types repeated too often. There are lots of annoying “The Floor is Lava” sections, where you need to jump from one perilously thin object to another to avoid falling into toxic liquid. The game also has an irritating tendency to hide gun turrets behind corners, which do nothing other than push you into a quickload so you can deal with it properly. Oh, and there are way too many vents which you can only crawl through at an interminably slow speed.
The story is also perhaps a little too vague and artsy for its own good. I like the fact that it prefers to deliver its narrative through environmental cues and snippets of dialogue rather than laden exposition, but having completed it, I’m still not entirely sure what the core plot was, and as for the ending I’m downright clueless. The developer cites Twin Peaks as one of her main inspirations, and that definitely comes across during the game’s more surreal asides that occasionally crop up. But leans more toward the later, baffling parts of Twin Peaks, rather than the tantalising mystery of the first series. 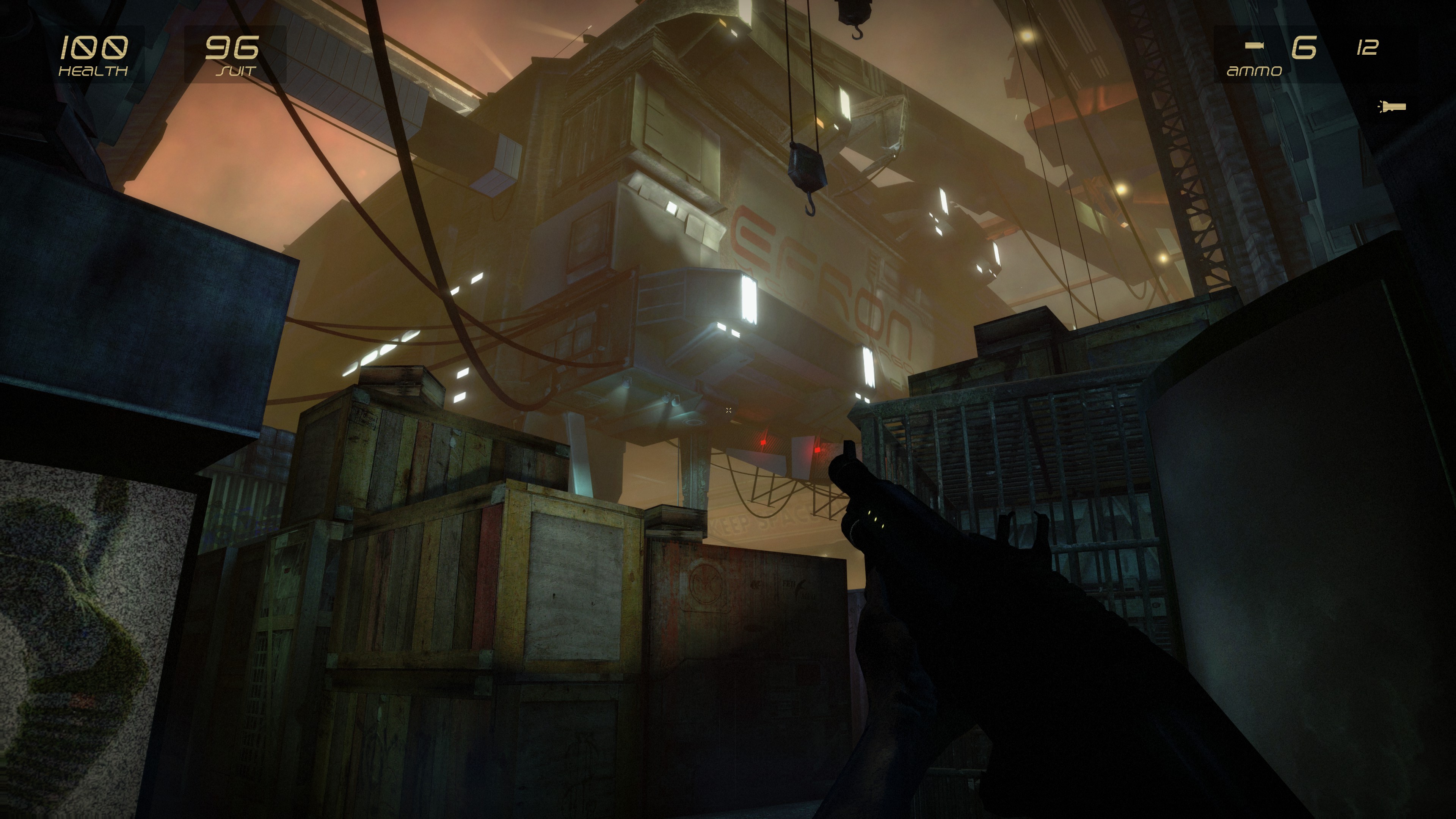 Yet while I would have liked a firmer resolution, I’m nonetheless extremely glad I took a punt on this weird and overambitious passion project. It’s an uneven experience, but it’s also like nothing else I’ve played this year, and the best bits are lodged into my brain like grenade-shrapnel. For those looking for a different kind of shooter, G-String comes thoroughly recommended. 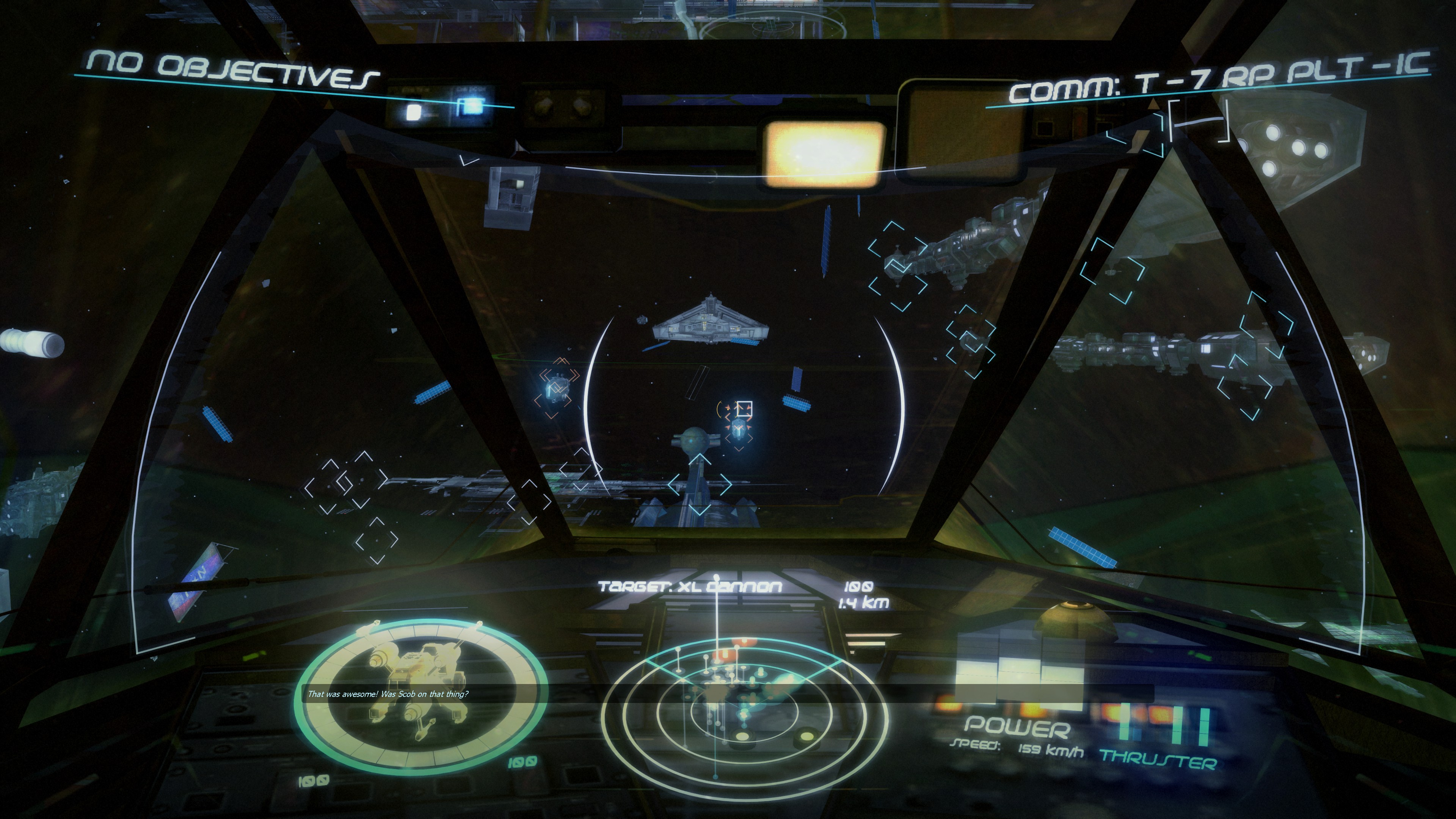