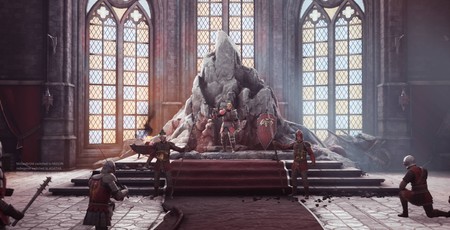 Chivalry II is the most enjoyable online multiplayer game I’ve played in ages. The sequel to Torn Banner’s multiplayer melee fighter of 2012, it adds complexity and depth to the combat without sacrificing accessibility, while expanding and refining the core concepts without losing any of Chivalry’s inherent silliness. It’s simultaneously an epic duelling simulator and a hilarious slapstick farce. I like it very much. 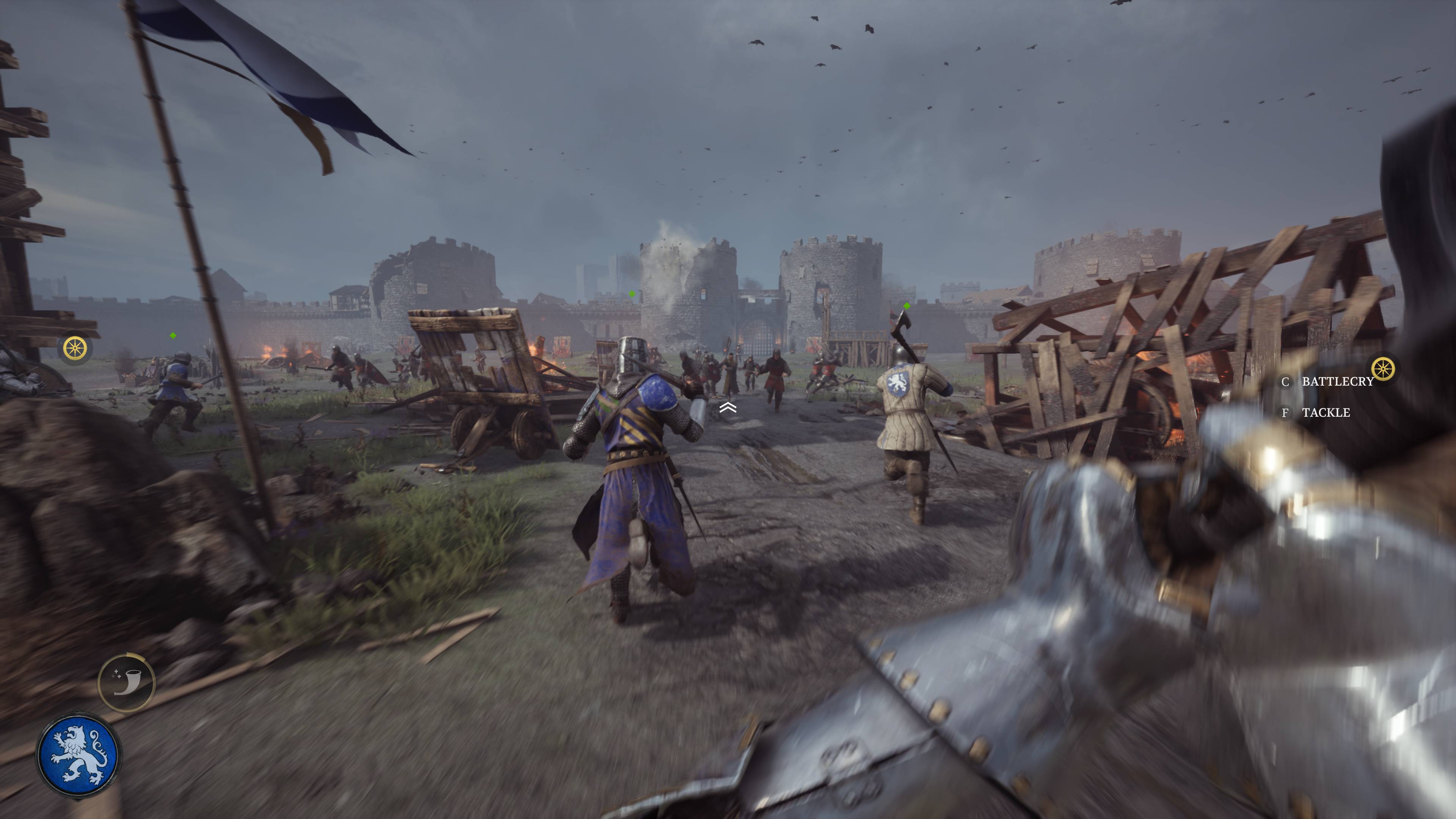 On the surface, not much has changed. Chivalry II remains an exclusively online experience, centring on the endless struggle between the noble Knights of Agatha and the evil Mason Order. The game revolves mainly around its Team Objective mode, an attack/defence scenario where both teams compete over a series of set goals, such as rescuing a bunch of captives from a convoy of prison carts, or breaking down the gate of a fort. There are other modes, such as Team Deathmatch and the riotously chaotic Free-For-All, but these tend to appear less commonly on server lists.

Combat too, remains broadly familiar to the original. Every melee weapon has three basic attacks, a horizontal swipe, performed by clicking the left mouse button, a vertical slash performed by rolling back the mousewheel, and a forward thrust, performed by rolling the mousewheel forward. A crucial element of Chivalry’s combat is these attacks are not locked animations. Players can “turn-into” attacks, sweeping the mouse in the direction of the attack, thereby moving their avatar’s shoulders and torso to make strikes resolve faster. 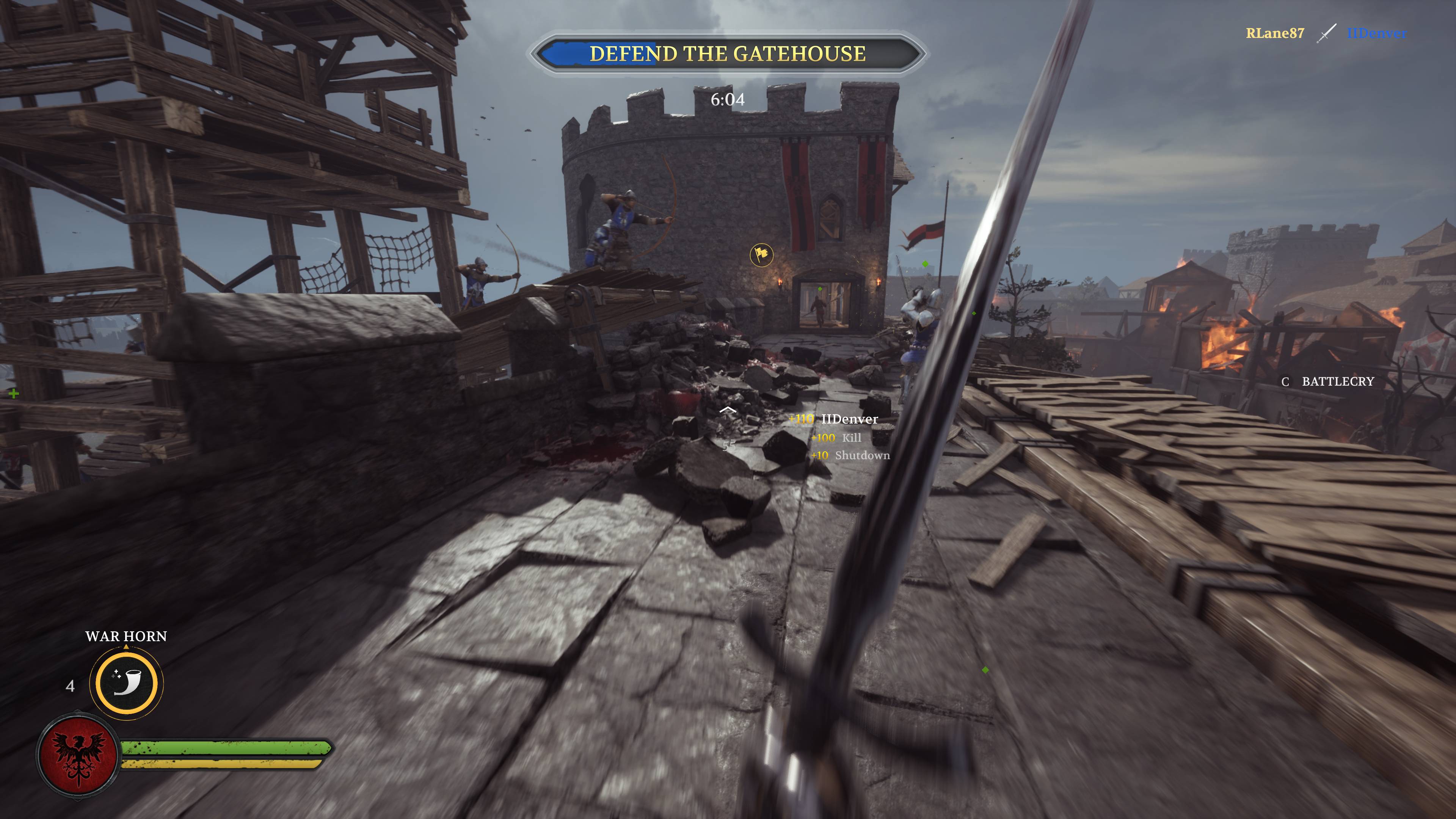 Yet while Chivalry II is similar to its progenitor on the surface, there’s a lot more going on beneath the armour. Torn Banner has added considerable nuance to the combat. Blocking alone has a wide array of potential interactions. Holding the block button will successfully stop an attack, but pressing it just before an enemy attacks lands will parry their strike, opening them up for a counterattack. That’s not all. You can also dodge attacks with a quick tap of the shift key, counter attacks by mimicking your opponent’s attack type, and even riposte attacks by tapping block and then starting a new attack before your opponent has finished theirs.

This probably makes Chivalry II sounds terribly hardcore, but the game isn’t like that at all. Straightforward blocks, dodges and parries will carry you forward in most combat situations, while there are a host of other easy-to-learn tricks that can give new players an edge. One easy yet incredibly effective tactic to learn is feinting, which involves performing one attack and then starting another attack halfway through, throwing off your opponent’s aim. Simpler still, an enemy who hides behind a shield or a block can be opened up to attacks with a swift kick to the codpiece. 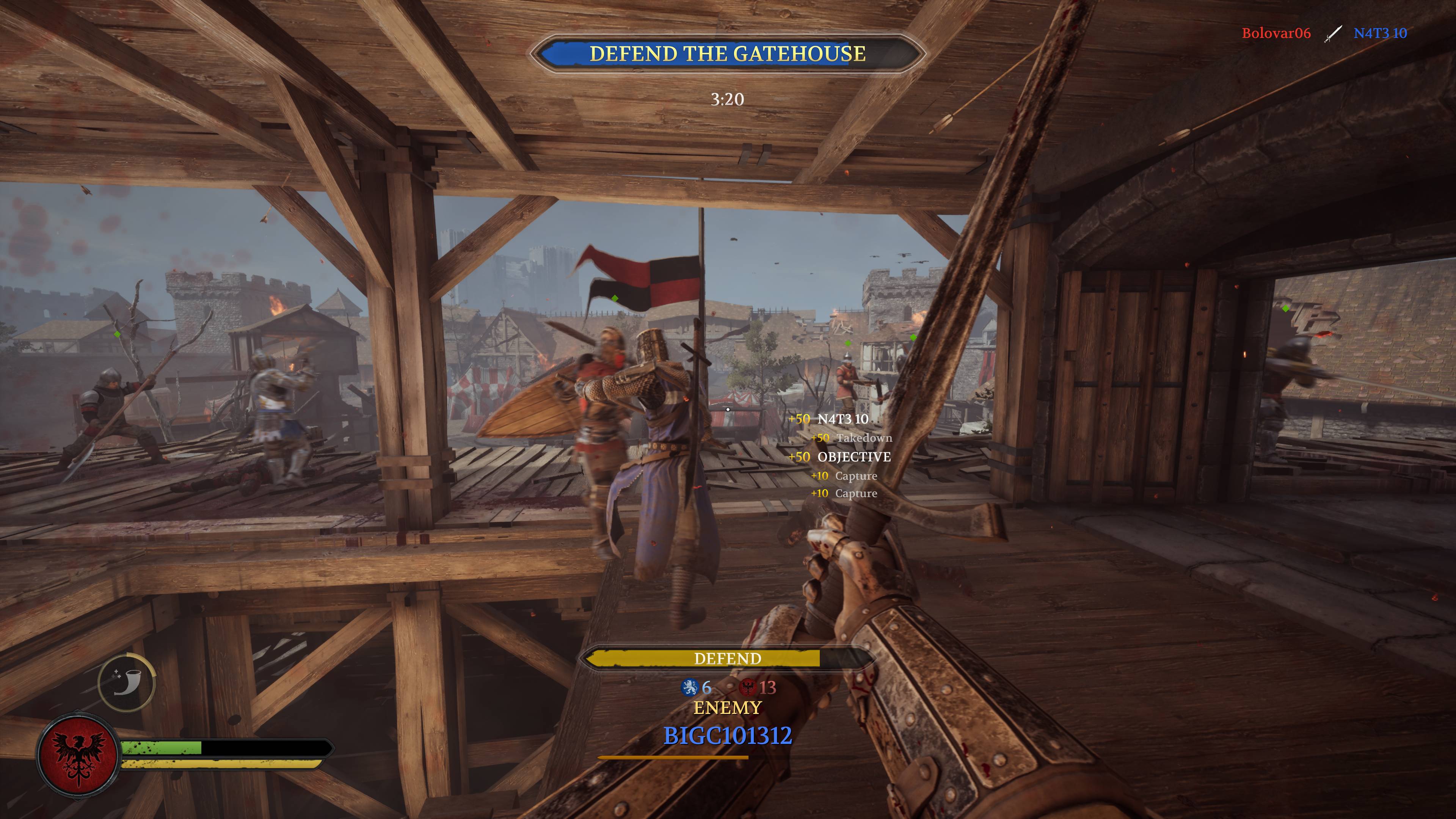 The more crucial point, however, is that your prowess as a fighter will only carry you so far. Chivalry is not a duelling simulator. It’s designed to represents the sheer, bloody chaos of medieval combat. While there’s a chance you’ll be vanquished in a one-on-one duel with a superior fighter, it’s more likely that death will come from a third player rushing in and slicing your head off, or being overwhelmed by a group of three to four players, or being shot from afar by an archer, or even by some chancing player chucking their weapon at you.

In other words, anything goes in Chivalry II’s battles. Not only does this work as much in your favour as against you, it also makes battles both spectacular and hilarious. As I intimated above, any weapon can be thrown in Chivalry, from hatches to halberds. In fact, anything you can pick up can be thrown, which includes environmental objects like bags of flour and even dismembered limbs. Embedding your war axe in an enemy’s skull from twenty metres away is one of Chivalry’s great joys, rarely achieved but satisfying and funny when it happens. 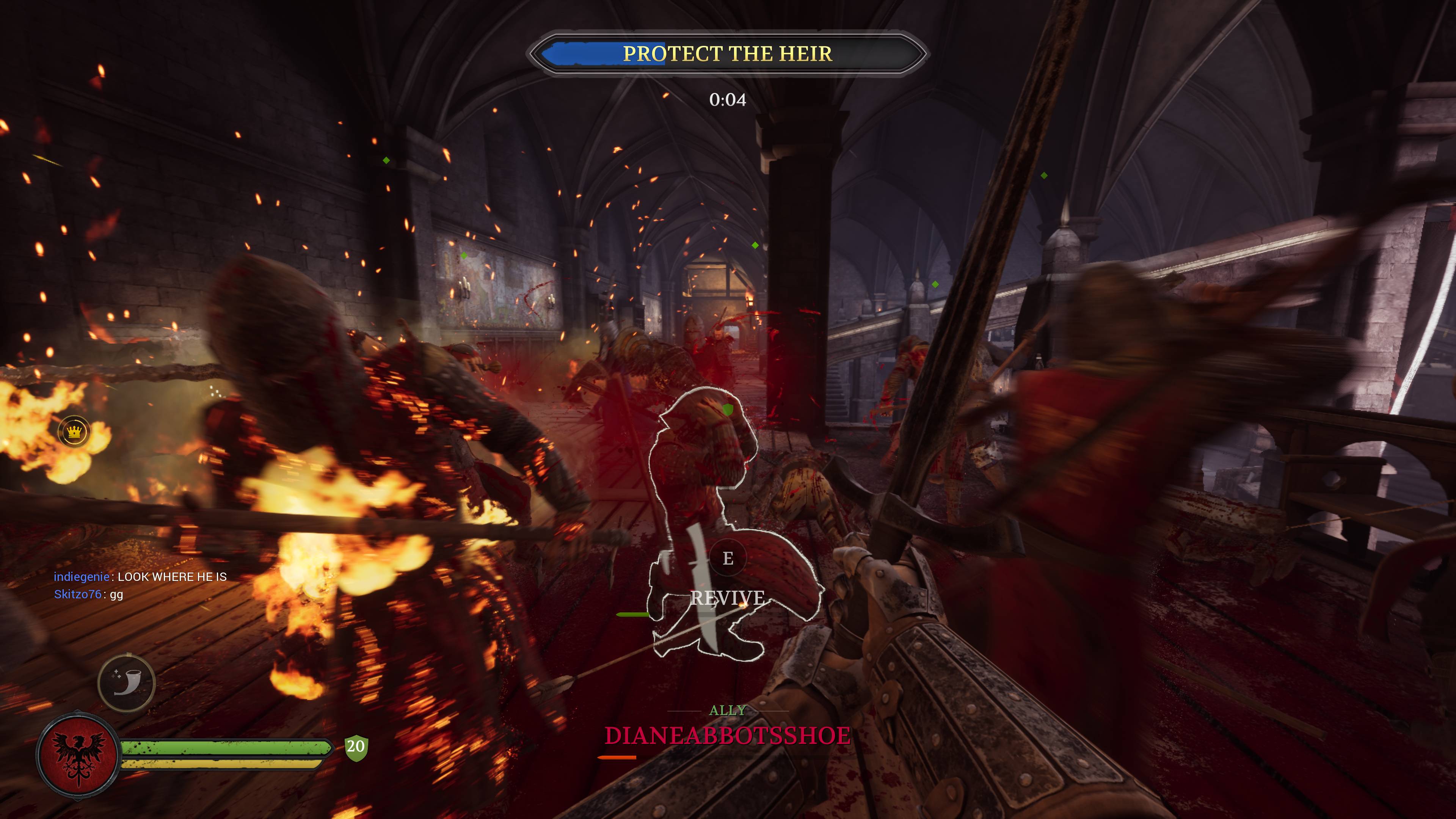 The game is also filled with so many little touches that you grow to appreciate. When you perform a successful block, for example, it momentarily blocks all incoming damage. This makes it possible to fight off multiple enemies in a way that no other multiplayer fighter caters for. It isn’t easy, and rightly shouldn’t be, but it is possible, and one of the most rewarding experiences in the match. Indeed, the only feeling greater than swashbuckling your way to victory is fighting off an enemy when you’ve only got one arm. That’s right, it’s possible to lose a limb and carry on scrapping, at least until you succumb to blood loss.

The nice touches don’t end there. All battles begin with a mighty charge, with both sides crashing into one another like opposing metal tsunamis. When you die, you always respawn at a run, giving you a chance to get a quick kill with a mighty charge attack, or even rugby-tackle another player to the ground. It’s customary to enter battle while screaming your war cry, which means Chivalry’s battles are always accompanied by the soundtrack of shrieking, ululating warriors. 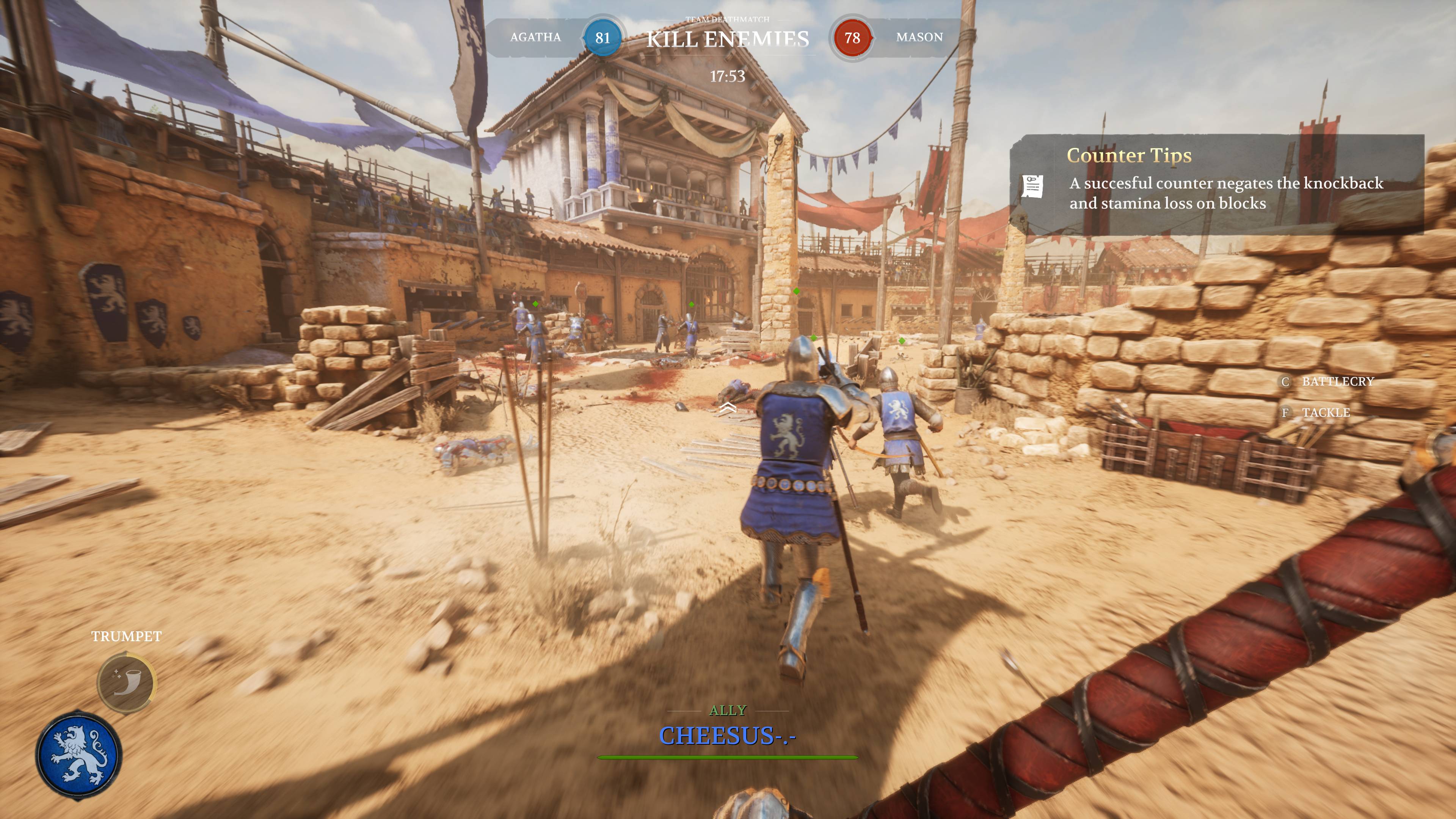 This brings me to an important point. Chivalry is as much about the experience as it is the competition. While it’s always wise to keep one eye on the objective, the 64 player battles leave plenty of room for pursuing your own goals. There isn’t the same pressure to perform as there is in say, Battlefield or Apex Legends. You can focus on improving your combat skills, or just skulk around the fringes having a laugh. The game plays up to this more relaxed, knockabout nature just the right amount too, featuring daft in-game emotes such as “Your mum” joke taunts. But it wisely never breaks character. While you’ll undoubtedly laugh at the game’s many random occurrences, the actual combat is always represented a grim, bloody, and horrible.

Oh, and it also feels fantastic. You really get a sense of the weight of your weapons, the way they clunk into a shield or shear through an opponent’s neck. One of Chivalry’s unsung heroes is archery. Killing foes from afar is extremely compelling. It does feel somewhat cheap, but then, the cheapness of archery in Medieval warfare is fairly historically accurate. I’m sure the brave French knights at Crecy and Agincourt had plenty to say about the dishonourable English archers, at least while they were still alive. 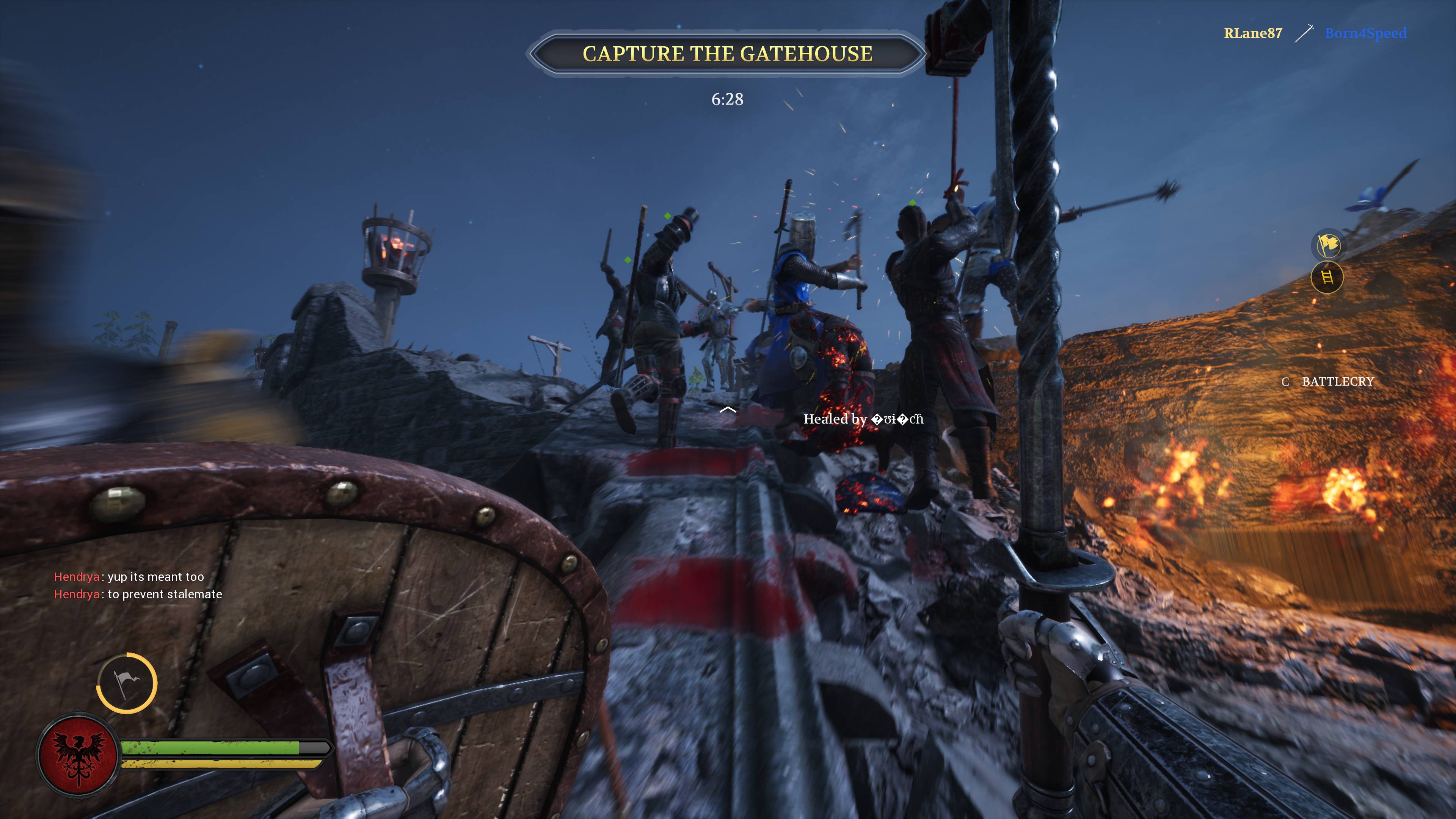 There are a few minor issues. There are only eight maps in total – six team objective and two team deathmatch. They’re all well-made, compellingly medieval maps (and also huge), but they’re also not hugely memorable, fairly typical variations on castles and villages. A bigger issue is the “Special Abilities”, timed class powers that can be occasionally deployed. The worst of these is the firebomb, which can be very quickly and cheaply thrown at an enemy’s feet to engulf them in flames. At least archery feels cheap in a believable way, firebombs just feel like a “Press E to Kill” button, unnecessary given the complexity already built into the combat systems.

But these are minor gripes. Chivalry II is a fantastic game, a sequel that well and truly improves on a predecessor, and the best time I’ve had in a multiplayer game all year. Now grab your sword, don your helmet, and follow me to get your arms chopped off by some idiot wielding a glaive.