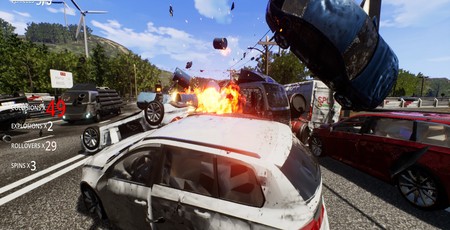 Just over a year has passed since Danger Zone smashed its way onto our PC screens, spilling fond memories of Burnout 3’s crash-mode all over the tarmac. I found Danger Zone to be a largely enjoyable, if slight experience, although it was weirdly constrained by the decision to have all the action take place in a simulated underground carpark. Now this sequel has suddenly T-boned me after appearing in my scheduling blind-spot. On the surface Danger Zone 2 addresses every problem I had with the original. The action now takes place on lengthy outdoor highways. There are new cars to drive, and more diverse challenges to complete. Outside of a multiplayer component and a proper replay mode, it is in theory everything you could possibly want from a spiritual successor to crash-mode.

By rights I should be gleefully slamming into intersections, laughing as cars crunch and buses crumble and lorries shed their loads like snakeskin. And yet, instead, I feel thoroughly underwhelmed. Sadly, Danger Zone 2 is nowhere near as enjoyable as the original. It feels rushed, it feels sloppy, and it feels far less thoughtfully put-together. The premise remains the same, which is essentially a blend of destruction derby and pinball. You crash your car into a sequence of busy intersections with the goal of causing as much chaos as possible. After a certain number of collisions, you can trigger a “Smashbreaker” powerup that causes your car to explode and fly through the air. While airborne, you can manipulate your vehicle's direction, accruing additional points by positioning yourself into more oncoming traffic, collecting a bunch of monetary bonuses, or grabbing extra Smashbreaker powerups, giving you another bite of the cherry.

Whereas Danger Zone sets its action in a drab virtual arena, Danger Zone 2 takes place on glorious, sun-baked outdoor highways. These roads are in fact based upon real-life “accident blackspots” including LAX, Birmingham’s Spaghetti Junction, and the M62 near Leeds. As a brief aside, I find myself oddly uncomfortable with the notion of deliberately smashing up junctions where real vehicular horror and tragedy regularly occurs. I’m aware this may be somewhat hypocritical, given that I’ll happily play shooters based on World War II and even more recent, more ethically dubious conflicts. Nonetheless, I do feel there’s something vulgar about basing your game’s environments upon places where civilians are frequently injured and (presumably) killed.

Anyway, the outdoor environments represent more than an aesthetic change. The run-up to each intersection is far longer, and you have can shunt AI cars without immediately wrecking your own. This enables you to build up your initial smashbreaker before arriving at the intersection, meaning you’re less reliant on how other cars respond to your initial accident to beat the level. Danger Zone 2 also uses this new mechanic as the basis for mission-side objectives, such as shunting 20 vehicles, or destroying all the taxis in a level. The other key change is in the variety of cars. Alongside the standard sedan, there are three other vehicles to cause chaos with, an HGV lorry that obliterates anything in its path, a lightning-quick F1-style racer, and a boost-enabled supercar reminiscent of those seen in the Burnout series. These add some much-needed variety into the destruction, although your choice of vehicle is locked to the stage that you’re playing.

By all rights, these additions should make the game a whole lot better, but all of them are undermined by the fact that Danger Zone 2 feels terrible to play. For starters, the car physics are ridiculous. The handling of playable vehicles is extremely basic, while AI cars appear to have bodywork made from helium. Even in the basic sedan, the slightest bump will cause AI cars to catapult forward as if they’ve been struck by a train. Hitting vehicles with the HGV lorry basically propels them into orbit. I’m happy to concede that Danger Zone is an arcade crash-'em-up and not a realistic driving sim. But the lack of weight and substance to any of the impacts means that crashes are nowhere near as satisfying as they ought to be. This problem is compounded by the rudimentary damage models. Crashes are visually spectacular, as they should be given the ludicrous amounts of sparks and fire that burst from any collision. But these fireworks conceal a rudimentary damage model that lacks any soft-body physics. Collision detection is weird, too. You can shunt cars around as much as you like, but so much as clip a larger vehicle and it’s game over.

My main issue, however, is that while the highway crash scenarios are visually more appealing, in play they are far less interesting. Danger Zone’s simulated crashes were smartly-designed puzzles that challenged your ability to dance your wrecked car around the intersection, angling your initial run just right and figuring out the various traffic-flow timings to cause maximum damage. In the sequel, half the time you’ve achieved the bronze medal before you’ve even hit the intersection. Meanwhile, the crashes themselves are less enjoyable due to a change in level end-conditions. In Danger Zone, the game would wait until all traffic flow had finished before tallying up your score. In the sequel, it simply waits until your car has remained stationary for a certain amount of time before commencing the countdown.

The idea is to stop players from having to wait around too long, but it also means runs are often cut short before the carnage has properly ended. I’ve actually failed runs several times because the game decided that I had finished, when in actuality there was still traffic oncoming to the crash-site. More importantly, those ridiculous chain-reactions were a core part of Crash Mode’s appeal, and Danger Zone 2’s prematurely-curtailed runs ruin that. There are a few other flaws I could pick at, such as rudimentary sound design, the enduring lack of a replay mode, and the fact that the game is still very short; entirely possible to complete in two hours. But the central problem is that the game feels rushed and lacks the attention to detail needed to make the new additions stick. If you’re looking for some quality vehicular carnage, you’re better off investing in the far superior Wreckfest. Leave Danger Zone 2 for the Emergency Services to sort out.