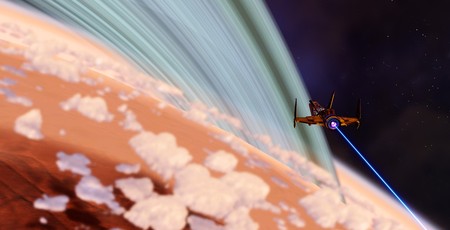 I’ve returned to No Man’s Sky every year since it launched in 2016, and every year I’ve found it markedly improved since when I last played. Through the Foundation and Pathfinder updates, Atlas Rises, and most recently No Man’s Sky Next, Hello Games has gradually expanded its colourful space-sim into the game it was always intended to be. No Man’s Sky Beyond is by far the biggest update Hello Games has added so far, including two new ways to play the game and a huge number of other features. It’s an impressive and at times wondrous addition. But it’s also the first update I’ve struggled to get into, primarily because No Man’s Sky’s menu system is simply no longer fit for purpose (if indeed it ever was).

Let’s talk about the good stuff first, however. No Man’s Sky Beyond offers a substantial expansion to the game’s multiplayer component, originally introduced in Next. It expands the per-galaxy player count from eight players to 32 and lets players drop in and out of your game at random. Most of these changes revolve around the Space Anomaly, a special type of space station that was originally added in Atlas Rises. Beyond basically transforms the anomaly into a social hub, teleporting you to an area called the Nexus where you can meet other players, join their games, or embark on multiplayer missions together. For players who enjoy NMS as a social experience, it’s a huge improvement. Be warned, however, that some players have encountered issues with the Space Anomaly affecting their savegames, from mysteriously disappearing freighters to outright corrupted saves.

The second string to Beyond’s bow is No Man’s Sky VR. This is a fundamentally different experience from standard No Man’s Sky, altering how the game controls as well as how it looks. On first impressions, No Man’s Sky VR is a dream come true. Landing your starship on an alien planet, stepping outside and being surrounded by its atmosphere, its terrain, its flora and fauna, is truly amazing. It’s also worth nothing that NMS looks great in current-gen headsets. Something about its bright colours and chunky world objects goes a long way to negate the lower-quality visual display of most VR headsets compared to viewing the game on a screen.

Controlling your spaceship in VR is also far superior than standard NMS. Rather than using a gamepad or keyboard and mouse, you use the touch controllers to manually pilot the ship with a virtual thrust control and flight stick. Not only is this far more immersive than the standard control method, it also makes piloting the ship easier and more intuitive. Other benefits include the ability to look freely inside the cockpit, which makes things like finding a nice landing spot on a planet or tracking enemy ships during a dogfight much easier. I absolutely love No Man’s Sky VR. Unfortunately, I also can’t play it for more than five minutes at a time, because it makes me feel so incredibly nauseous. Direct flight and walking around planets is manageable, but if I ever get caught in a space dogfight then it’s a one-way ticket to chundertown. Your mileage will vary, and if you can play it without being affected then you’re in for a treat. But I’ve played a lot of VR games, and I’ve never felt quite as ill as I have playing NMS VR.

There are a couple of other issues with the VR version too. For example, you physically wield your multi-tool in your hand, which is great, but the tool also feels entirely weightless, which is less good. Furthermore, having to teleport around huge swathes of landmass somewhat dampens the otherwise profound immersive effect of NMS VR. Of course, you can switch to standard movement controls, but only if you don’t get motion sick. Alongside these two major features, the Beyond updates also adds a huge number of smaller mechanics designed to complement the main game. This includes alien mounts, new exocraft, new planet types and biomes, more extensive farming, cooking. The list goes on. In many ways, NMS now less resembles Elite and is more Minecraft in Space, as much about creation as it is exploration and discovery.

If you thought that vanilla No Man’s Sky was a bit thin, a bit repetitive, then No Man’s Sky Beyond is well worth a second look. But only if you got enough patience to deal with the bloody interfaces. I’ve never been a fan of how much time No Man’s Sky requires you to spend in menus. Nor do I particularly like the card-based system that NMS uses. As of Beyond, however, it’s reached breaking point. It’s worth noting that Hello Games has tried to address some of the menu system’s issues, such as upping the limit on resource stacks from 250 to 10,000. Unfortunately, this is nullified by the fact that there are so many new items that you pick up. Your inventory still ends up constantly full, but now it’s filled with an even wider range of resources that makes the crafting system even more convoluted.

Personally, I’d ditch the inventory limit entirely, but at the very least the game should double inventory space for every single ship, suit, multitool, and so forth. In a game that is about exploring the wonder of the universe, the most exciting thing you can find shouldn’t be 'more storage space'. That’s absurd. On PC specifically, there are other annoying issues too. For example, there’s still no hotkey for switching between third and first person, or for quickly switching to photo mode. This is all done through the quick menu, which is very fiddly to interact with on keyboard and mouse. Also, I don’t know whether I just couldn’t remember the right keys, but when taking screenshots in photo mode, I could not tilt the camera, which is why all my screenshots are so flat.

There’s no question at this point that No Man’s Sky is a good game. What was once a glorified sci-fi poster generator is now a rich and highly create space adventure. However, I still don’t think it’s a great game, and that’s largely because of how fiddly it often is to interact with. If Hello Games decides to put out another update, I hope it focusses on streamlining the existing UI and trying to make menus less of a pain to navigate. Strange as it may seem, Hello Games’ effort to add more stuff into No Man’s Sky has ultimately been too successful.