All screenshots by Jack de Quidt, taken on a PS4

If political power comes from the barrel of a gun, Just Cause's Rico Rodriguez would rule the world. In this series' universe there seems to be no political problem that can't be solved with the copious application of explosives.

In this game I've driven boats, bikes, cars, and tanks. I've hijacked jets in mid-air before crashing them into kilometer-wide satellites. I've taken out entire police stations full of masked gun toting bad-guys and flown into the air in a helicopter laden down with the tethered corpses of my enemies.

But what about the story? I hear you whisper.

I've whistled through hidden caverns with a wingsuit, pulled a statue apart with grapple hooks and in one particularly foolhardy moment, flown a speedboat up a mountain just so I could ride it all the way down from the snowy peak.

But what about the story?

I've blown up oil refineries, I've clattered through enemy airfields and torn pilots from helicopters before crashing them into the ocean.

Well, that part is garbage. It's all garbage.

Just Cause 3 is a fantastic sandbox - a universe where gods exist, but they're all called Rico Rodriguez. You can survive explosions, falls, and multiple bullet wounds without a problem while your grappling hook gives you - essentially - mechanical telekinesis.

There are no problems you can't solve, no obstacle you can't overcome.

But you are a vengeful god. You scorn these puny mortals.

You travel the island with a combination of your grapple hook, wingsuit and parachute - it feels fantastic, the parachute helps you climb, the wingsuit gives you speed and the grapple hook helps you couple together. There are vehicles littered around that you can easily steal, but when the combination of your own travel abilities is this fun it's hard to see why you would bother.

Few open world games manage to make you feel so powerful, to give you so much capacity for pure violence.

Coupled with this, there are challenges running throughout the game. They're mostly fun: fly a wingsuit through some caverns, drive a jeep loaded with explosives into a lighthouse, use a rocket launcher to blow up literally everything in sight. These are unlocked by liberating areas and completing them gives you access to the game's mod system. 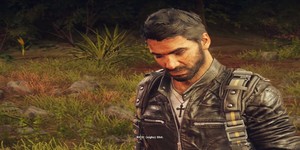