Mafia III nails the cinematic 1960s: crime families slicing apart a city that eats its young, cars fishtailing and sliding across streets, cops gathering at bars and donut shops, loyalty for sale to the highest bidder.

It's a darker game than I was expecting, both in terms of its story and its general atmosphere. At times Mafia III's atmosphere felt almost oppressive, although this was largely due to the overt racism directed at the player character, Lincoln Clay. The city of New Bordeaux where Mafia III's story takes place is riddled with racists and heavily segregated. In just a few minutes, I'd seen the N word and various other slurs thrown around before I'd even finished the game's introduction, and from there it only got more upsetting. After the prologue, when the game opened up, it was impossible to escape it. Pulling up across the street from a gang enforcer I wanted to kill, I saw cops cuffing black citizens in the street, one police officer at the end beating another guy with a club. Even just walking the streets I was frequently insulted.

It's a weird thing to talk about, primarily because I'm white as all hell, but the consequences of this racism on a mechanical level are interesting. Police react slower to crime in the black or poor neighbourhoods of New Bordeaux, and the further uptown you go, the more likely you'll come across a business that only lets white people in. It was frequently jarring, and a few times I had to step away from the game for a little while. Mafia III's story works well, largely because it takes a simple premise and handles it well. It's revenge, mostly. Lincoln Clay returns from Vietnam to the organised crime family that'd brought him up as an orphan. Within days, they're taken out in a double cross by the crime boss that runs the city. Lincoln Clay survives and then decides that he'll dismantle the entire operation. Your road to the top is bloody, fairly well written, and the facial animation in the cut-scenes is among the best I've seen.

I felt compelled to finish Clay's story, despite the fact a significant portion of the game sees you driving from warehouse to warehouse stabbing mafia goons in the face. There's plenty to do in New Bordeau; it's just that lots of it involves lurking around industrial buildings putting holes in people. The game is at its best during its set pieces, whether that's you skulking around an amusement park, storming a high-rise skyscraper or trying to escape cops with a crime boss's nephew locked in your trunk. The rest of the time you're cleaning up side objectives essential to progress the game, and this makes up a lot of the mid-part of Mafia III. Pacing wise it feels weird, because these objectives are small, often taking no more than three to four minutes to complete, followed by you driving to the next place. As a result, these activities feel bitty and inconsistent and I was spending more time driving from place to place than doing the fun stuff.

In fact, Mafia III feels more like a decent action-shooter than an open-world adventure, and I can't help but feel that it would have worked better with a linear narrative, focusing on the set-pieces and less on the busywork, but it largely get a pass because the stealth and combat is so satisfying. 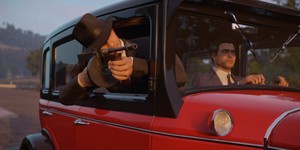