The meat of the game involves learning how to manipulate this hierarchy to your advantage. You'll extract information from treacherous "worm" uruks or low-power Captains to reveal the strengths and weaknesses of stronger Captains and Warchiefs. You'll invade events such as ambushes, feasts and trials by ordeal to take out specific uruks while they are distracted. Sometimes dispatching a more powerful uruk such as Warchief will involve a chain of events that include first defeating his bodyguards - Captains who accompany the Warchief when he appears. The Nemesis system gives a real sense of life to Monolith's vision of Mordor, as your opponents have recognisable names, motivations, strengths, fears and so forth, and move about the map on their own little missions. It's a wonderful emergent system, completely captivating entirely in its own right. And we haven't discussed the best part of it yet.

In the second half of the game you gain the ability to "brand" uruks, turning them to your side, and are given the objective of turning the hierarchy to suit your own agenda. So you might brand a low ranking Captain, order them to prove their worth and become a bodyguard of a Warchief, before finally commanding them to betray that Warchief and usurp their position. In terms of evolving play it's ingeniously meted out, how you move from engaging in brawls with small-fry uruk, to planning how to assassinate Warchiefs, to supplanting them with your own. It's important to point out that even if we disregarded the Nemesis system entirely, Shadow of Mordor remains an exceptionally well made (if far less interesting) game. To begin with, the writing and voice-acting are fantastic. Talion's balancing act on the precipice between light and darkness is compelling, made more so by his clashing of heads with his ghostly companion. Easily the best writing is found with the the uruks themselves, who are by turns, witty, stupid, insane, conniving, bullish, ingratiating, and above all wickedly provocative with their sneering jibes and putdowns.

The various combat systems are equally well designed. Shadow of Mordor's facsimile of Arkham Asylum's melee combat is extremely strong, bolstered by complex, carefully blended animations, a superb camera, and some truly spectacular (and exceptionally grisly) combat finishers. In addition to the sword, Talion has access to a spectral bow and arrow, which thanks to the slow-motion ability it comes tied to, is a great way to even the numbers of particularly large fights. A stealthy approach is also perfectly viable. The uruks have sensible lines of sight, their awareness clearly indicated by icons above their heads, and Talion's stealth takedowns are just as satisfying as his combat moves. The only facet of Talion's skill-set which doesn't work as well as it could is the climbing, which is reminiscent of the original Assassin's Creed in terms of being somewhat unpredictable. It's a long way from terrible, but there have been multiple occasions where Talion has accidentally jumped into a campfire surrounded by uruks, or refused to climb onto a wall in order to evade detection.

There are a few other flaws which ought to be discussed. In a rare inversion of the usual situation, although Shadow of Mordor's world is huge fun to play with, it isn't particularly interesting aesthetically. It mostly consists of fairly bleak open plains dotted with samey looking ruins and unnaturally square cliff-faces. To be fair, Monolith didn't have much to work with to begin with, given what Mordor is like according to Tolkien's fiction, and they do make an effort to spice things up in the second half of the game. Even so, it's a far cry from the likes of Skyrim or Lordran. In addition, the PC control scheme makes a sterling effort to use as many keys as possible, which may result in a trip to the doctor on account of knotted fingers. Lastly, while the script and voice acting are both top-notch, the plot itself suffers from that usual open-world problem of being scrappy and disjointed. You might be entertained by the characters, but you probably won't care about them very much.

Yet these problems are but a few droplets of orc blood in an otherwise verdant forest. I have been thoroughly entertained by Shadow of Mordor. It's superbly presented. Its myriad systems, both borrowed and built, are delicately sewn together. Most of all though, its shown me something which I have genuinely never seen before in a game, and I expect that, as Monolith borrow from Batman and Assassin's Creed, that we'll be utterly exhausted by Shadow of Mordor's nemesis system once the games industry is finished with it. Oh no. Here we go again! 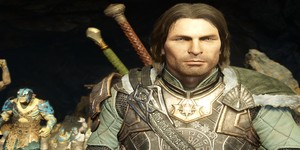