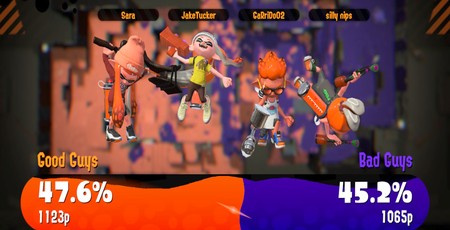 The original Splatoon launched in 2015, when the novelty over a shooter that wasn't really a shooter — Splatoon's multiplayer lets you engage in paint-based fights to the death, but it's really about painting the floor in your colour — won it many fans. Now, it's back, and the shine has worn off, so how does it hold up?

Splatoon 2 is a saccharine explosion of adolescent joy that couldn't feel more like a Nintendo game if the player characters were plumbers in colour-coordinated outfits. 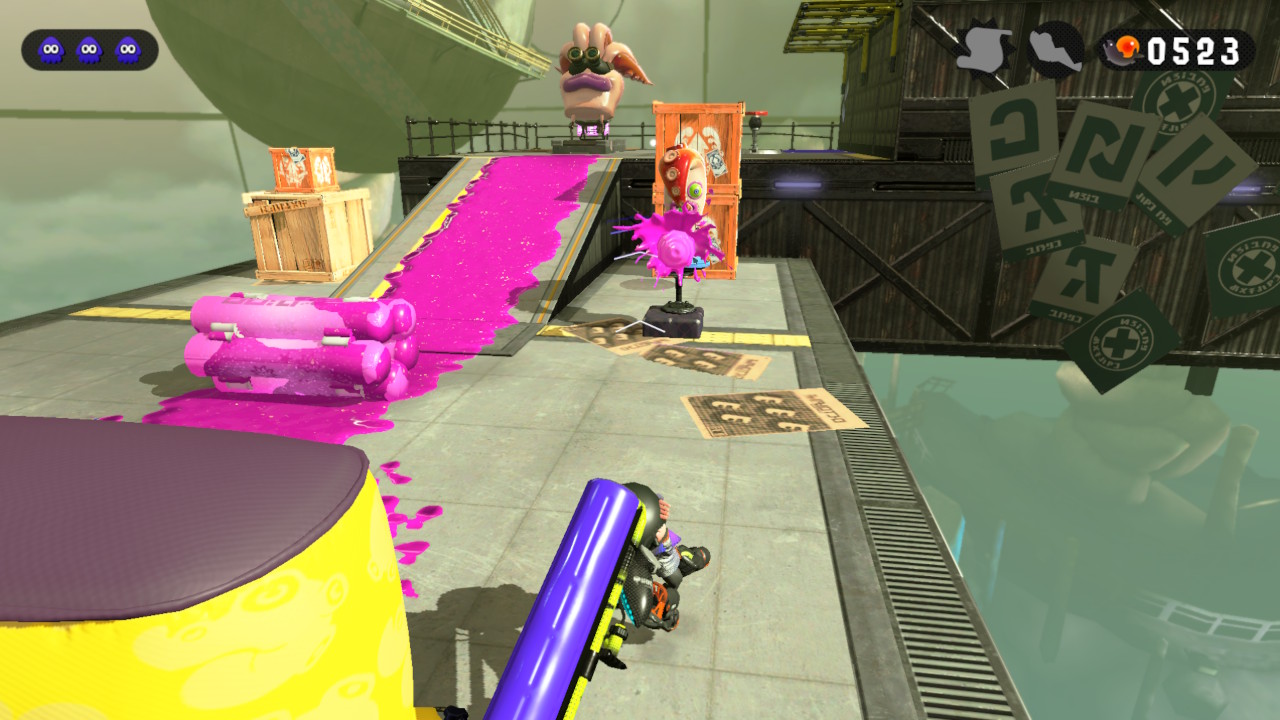 Hiding beneath the candy-coloured surroundings is an innovative and exciting shooter, but fans of the original Splatoon will find the action perhaps too familiar, and numerous small issues stop the game from being a must-buy.

It's not a bad game by any stretch of the imagination. Splatoon 2 is a thoughtful reiteration rather than a broad reimagining, a sequel that builds on the strengths of Splatoon's world rather than offering up a radically new approach. You play as squidboy (or squidgirl, in my case), and this means blasting around the place alternating between squid and human forms; as a human, you're able to wield weapons, while switching into squid form allows for quicker traversal and the ability to recharge your precious ink. 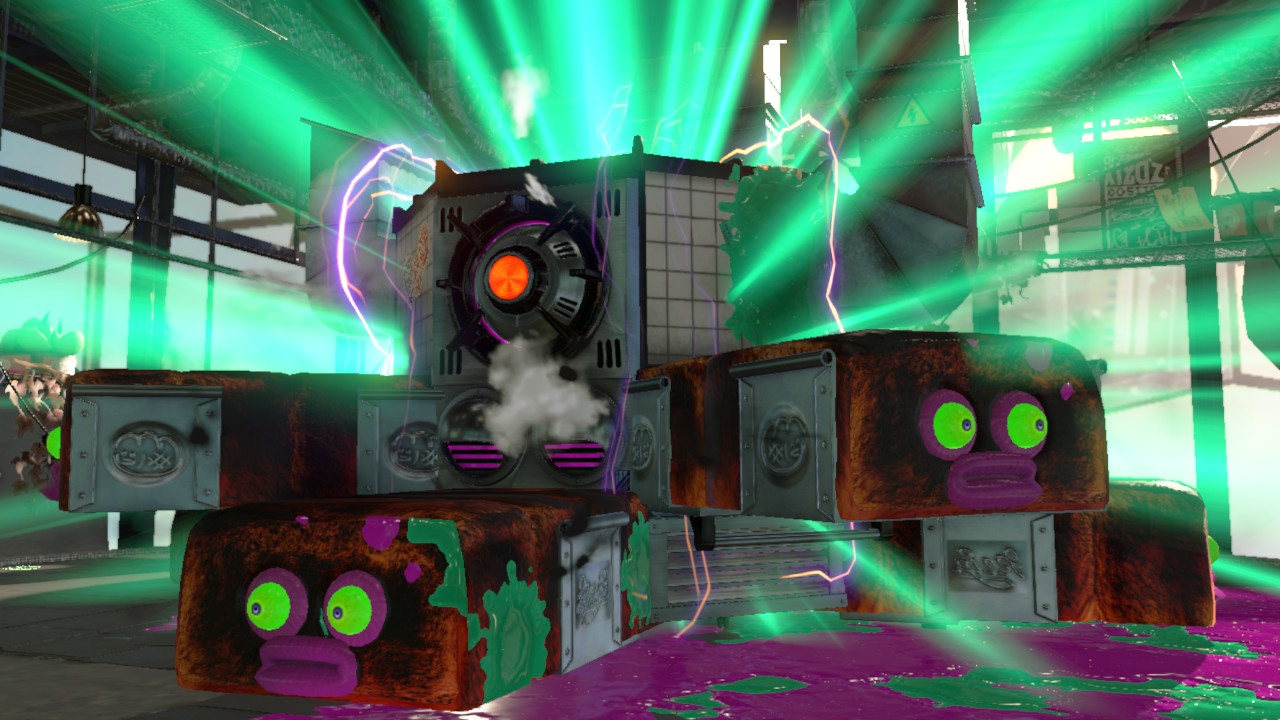 It's inevitable that the game, Nintendo's most successful new IP in a long while, would appear on Nintendo's new console, and everything that helped Splatoon capture the imagination of fans has returned here, all present and correct.

The single-player is a surprisingly meaty effort, with an emphasis on using a variety of paint-based weaponry to take out enemies. This is a competent and enjoyable shooter. Reloading is done by turning into a squid and sinking into ink the same colour as you, and the weaponry is top notch: Paint rollers can be used to clear out into areas, while a paint P90 can be used to light enemies up, spattering the surrounding area at the same time. 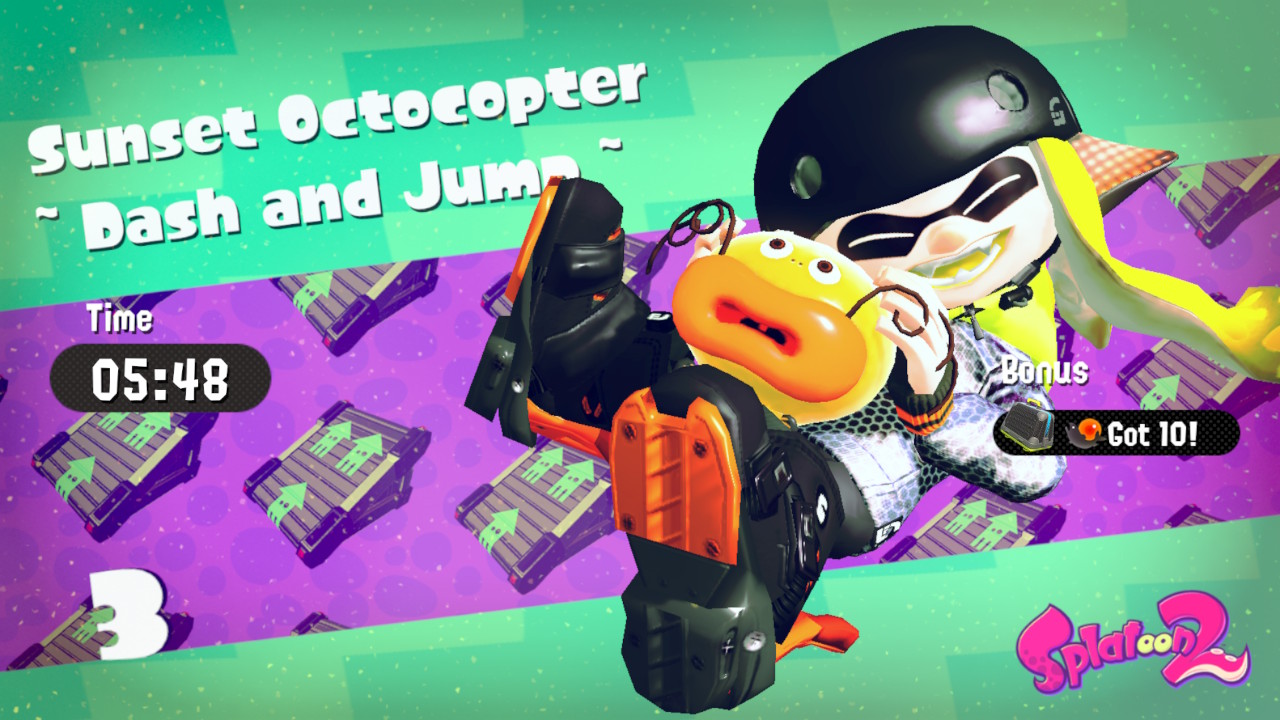 It feels like a third-person shooter from a decade ago, although the mechanics are still tight. You explore areas, solve light puzzles, and blow apart crates to collect currency that can be used to upgrade your weapons and gear. It's charmingly nostalgic, and Nintendo has a real flair for firepower, despite its reputation as a family-friendly developer. I personally fell for a weapon that's equal parts shotgun and umbrella. The umbrella protects you from incoming paint, while the shotgun takes out foes. Another favourite is the sniper rifle, here charging up before firing a spurt of paint across the map, hitting your target and coating everything in a straight line between the pair of you with paint.

The story is capable, full of puns, and good fun to tear through, but it's not the main event here, which is fortunate, as the ending is a damp squib that left me somewhat dissatisfied. I didn't resent my journey to the end of the game, but I wish there had been a better return on my time investment. 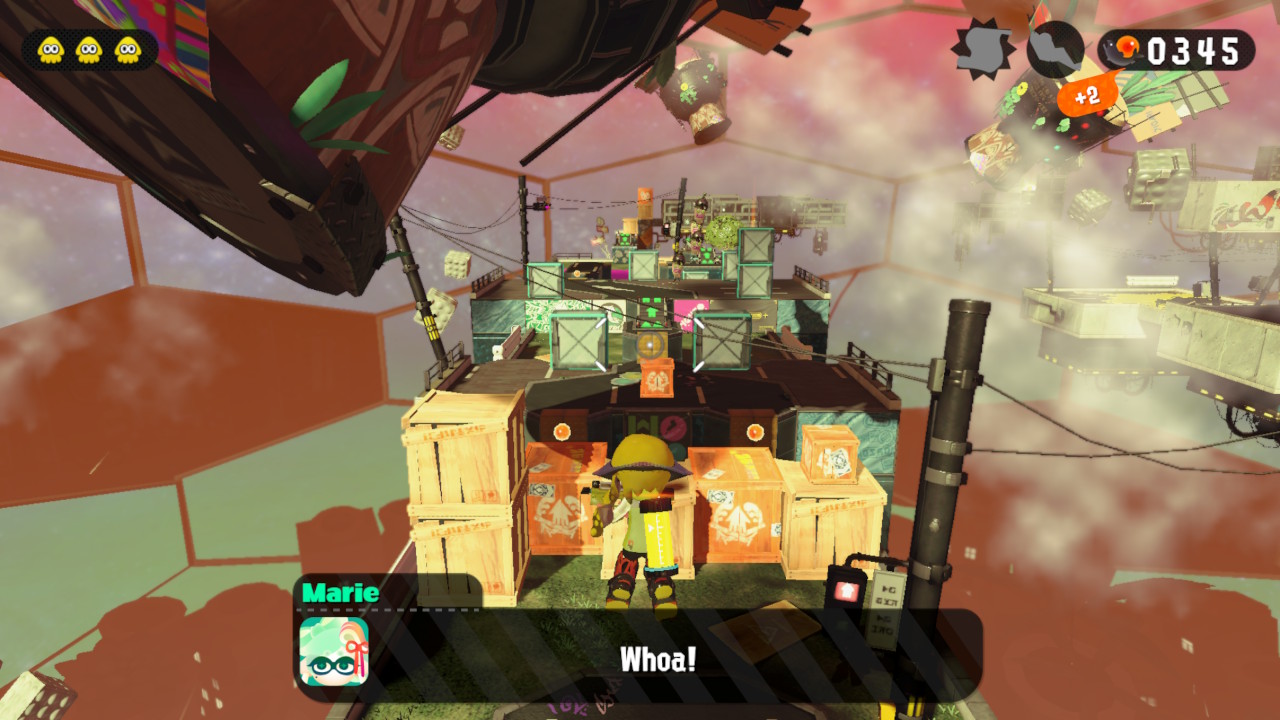 I did enjoy the bosses, though, with the first of seven bosses being a massive ovens that has bread popping loose to attack you. Blast the tentacle in the top of the bread, and the oven upgrades, and suddenly the overly aggressive bread is coated in armour plates.

Still, you're here for the multiplayer. Making a return is Turf Wars, the unranked brawl that sees two teams of four trying to paint the town red, or whichever colour they're representing, while taking out anyone who gets in their way. Bizarrely, in one of the game's biggest missteps, only two maps are live at any one time, with the map pool rotating every few hours. Each match runs for three minutes, meaning that you'll be playing on the same two maps a lot before they switch over. It's annoying, and it's just a confusing choice. It's a holdover from the original Splatoon, sure, but there it was due to Splatoon having very few maps, and here it's not justified at all. 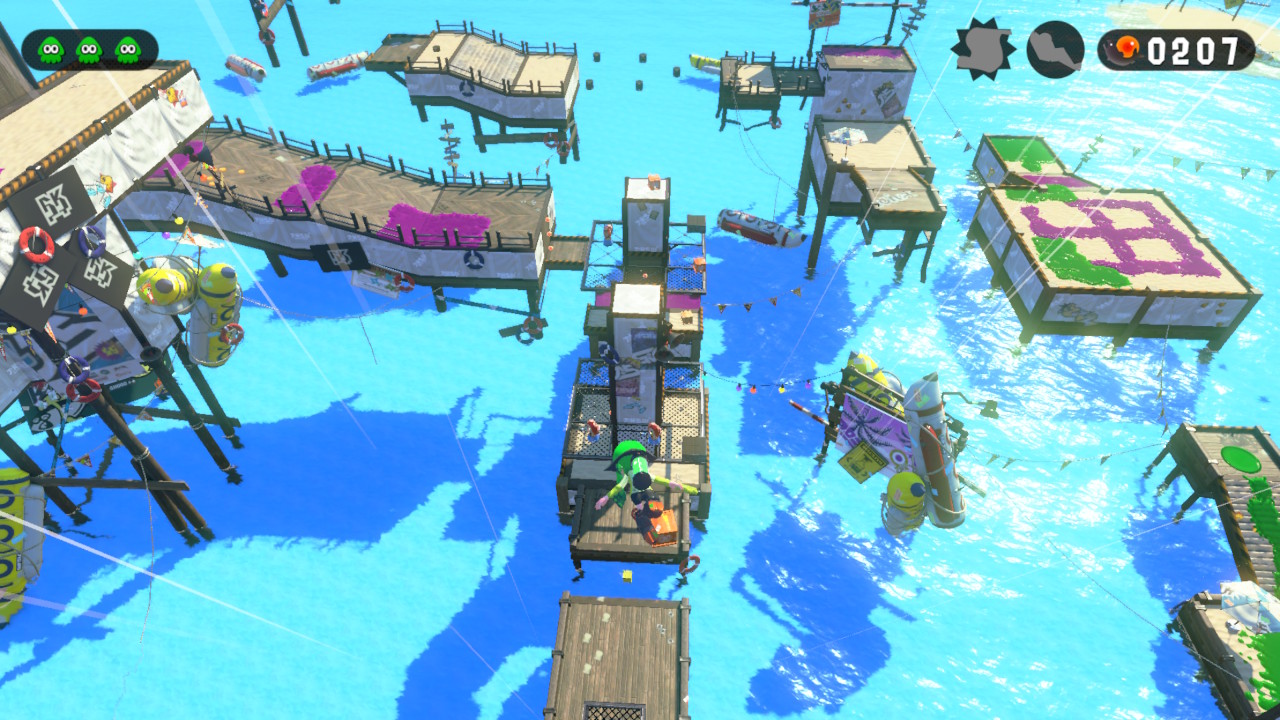 The weapon you start with is better at coating the environment than enemies, and poor matching meant that I was often pitted against players with a wide range of weaponry while I had to grind to level four to get access to new weapons. Your speed at levelling is largely dependent on the points you acquire, and as a result, if you're getting stomped, it can be quite a long time before you get more.

There's a different two maps in the game's ranked play, with two separate ranked modes including Splat Zones, which has you fighting over two smaller zones so you don't spend most of the map painting your own base. 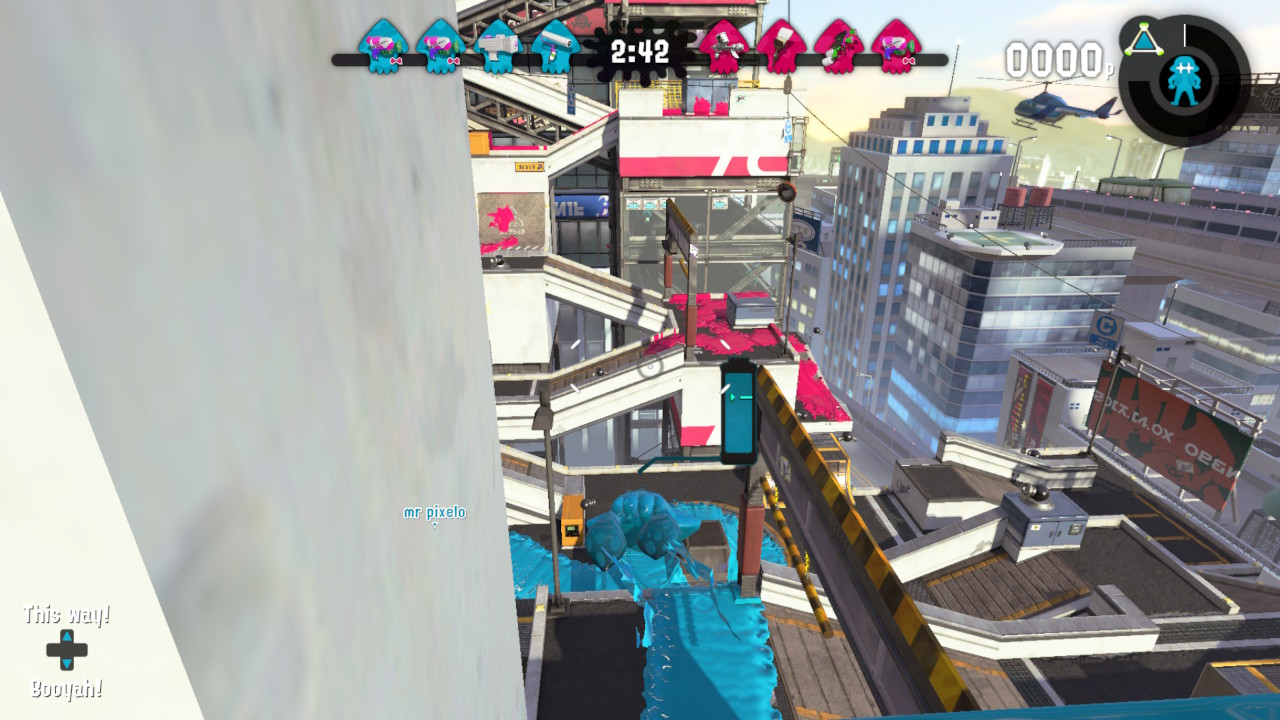 This is the same with the game's Salmon Rush, a cooperative mode that sees you assailed from all sides as you try to take on a series of challenges with ascending difficulty. You can only play it online at certain times, in another baffling decision from Nintendo.

There's a weird attitude to Splatoon 2's online that seems to dictate that you have to play by Nintendo's rules. For a console that's positioned itself as being available to you and your friends at any given time, the rigidly defined structure of online play is particularly grating. 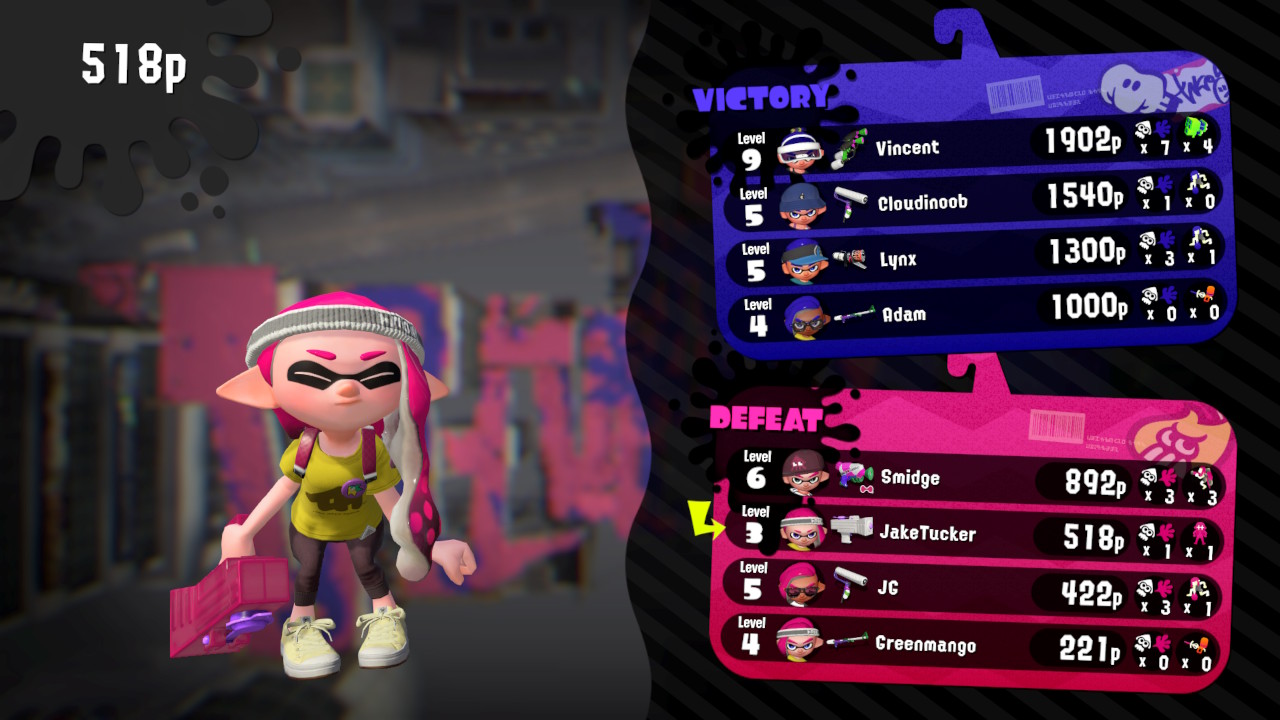 It's damaging to the game, but none of it changes the fact that Splatoon 2 is a very good shooter. Yes, Splatoon 2 is more of the same, but there's so much here, between the single-player, multiplayer, and metagame Inktopolis content, that it's hard to feel aggrieved at the size of the package.

Shooter fans looking to get something decent for the Switch could find themselves well served by this, but those expecting a multiplayer renaissance will be bitterly disappointed.