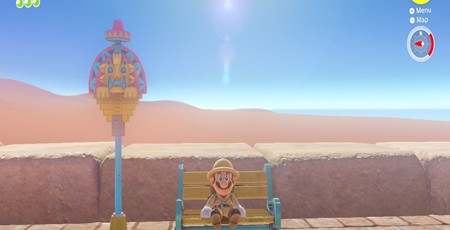 A t-rex, a tank, a rocket, an Easter Island statuette with sunglasses, a Goomba, a Chain Chomp.

This is a non-exhaustive list of things that I took control of during my time with Super Mario Odyssey. Each of the objects, and several more besides, were polished enough that they could have been the stars of their own games, but here they are just momentary distractions, one-off mechanics employed to facilitate getting your hands on the next moon or to solve the next puzzle. 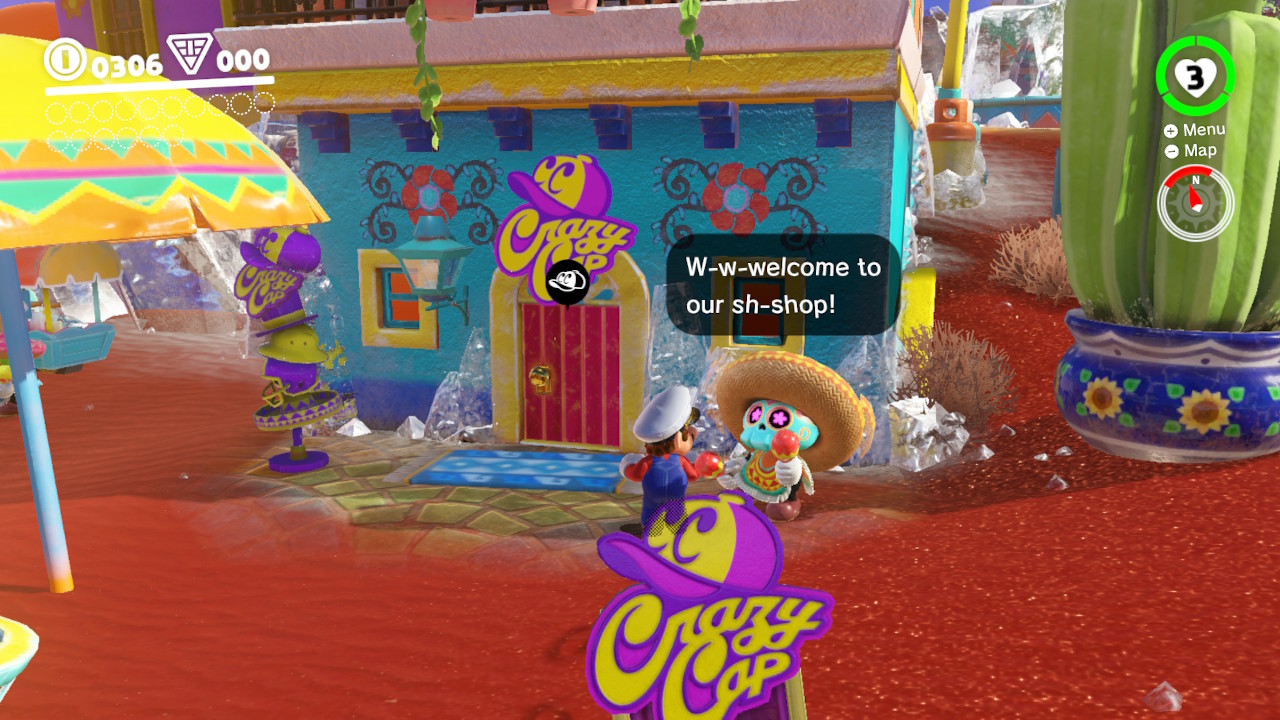 Super Mario Odyssey is a game that seems to take delight in spoiling you, rounding off a stellar year for Nintendo's hybrid Switch console not by reinventing the wheel as it did just a few months ago with The Legend of Zelda: Breath of the Wild but by making a game that feels like a celebration of Mario's 30 years of legacy.

Odyssey may feel similar in structure to 3D platformers that have come before it. You venture from level to level, talking to people and jumping your way through levels. As mentioned above, the aim of the game here is collecting Moons to power your spaceship, which you're using to get from place to place after Princess Peach has, again, been kidnapped by Bowser. 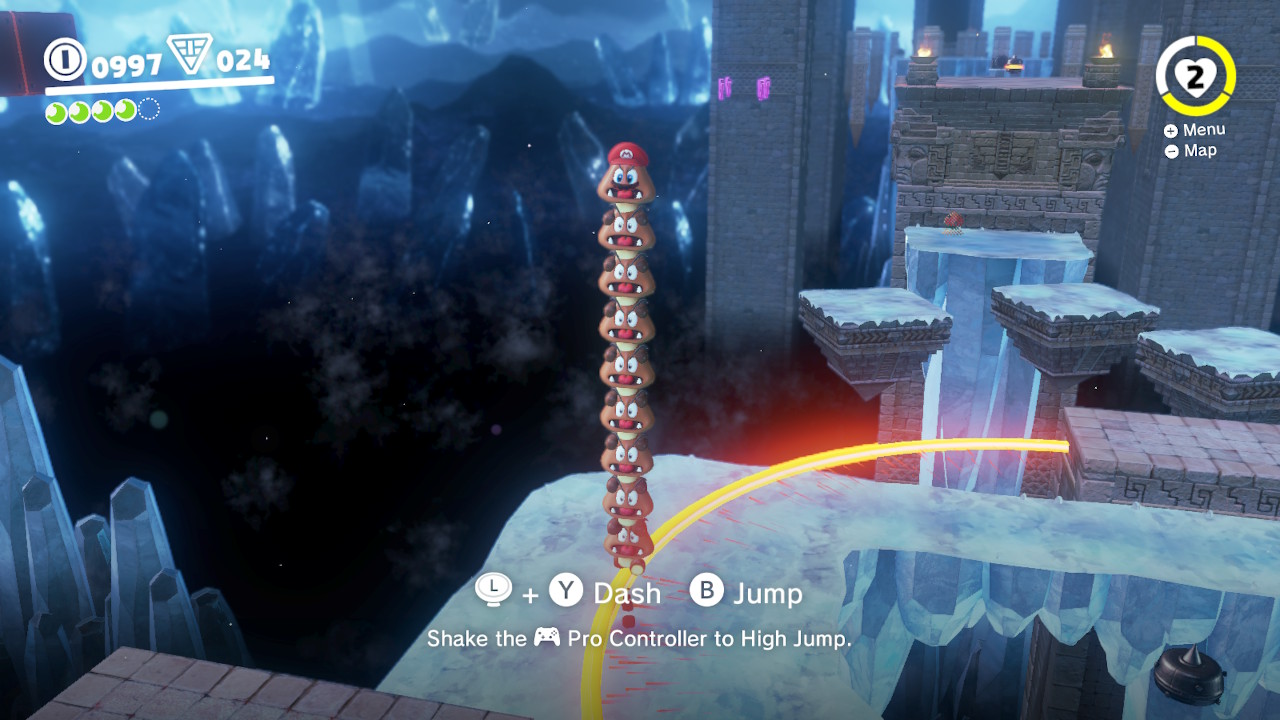 The level of polish both mechanically and visually that the game has is enough to lift it head and shoulders above any other 3D platformers that have released this year, but the real star of the show is Cappy, Mario's magic hat. There are some plot reasons for Mario's new hat, but within an hour you'll swear the two had been paired up since Super Mario World, such is Cappy's impact on the way Mario plays.

The headline feature is Cappy's ability to possess pretty much anything he lands on. This can be some of the creatures listed above or something different; my favourite resembles an onion with legs, and it can grow these legs to reach impossible heights without jumping. Suddenly, getting onto objects is a matter of springing yourself into the sky and then doing a tiny roll in the air to flip onto floating platforms. 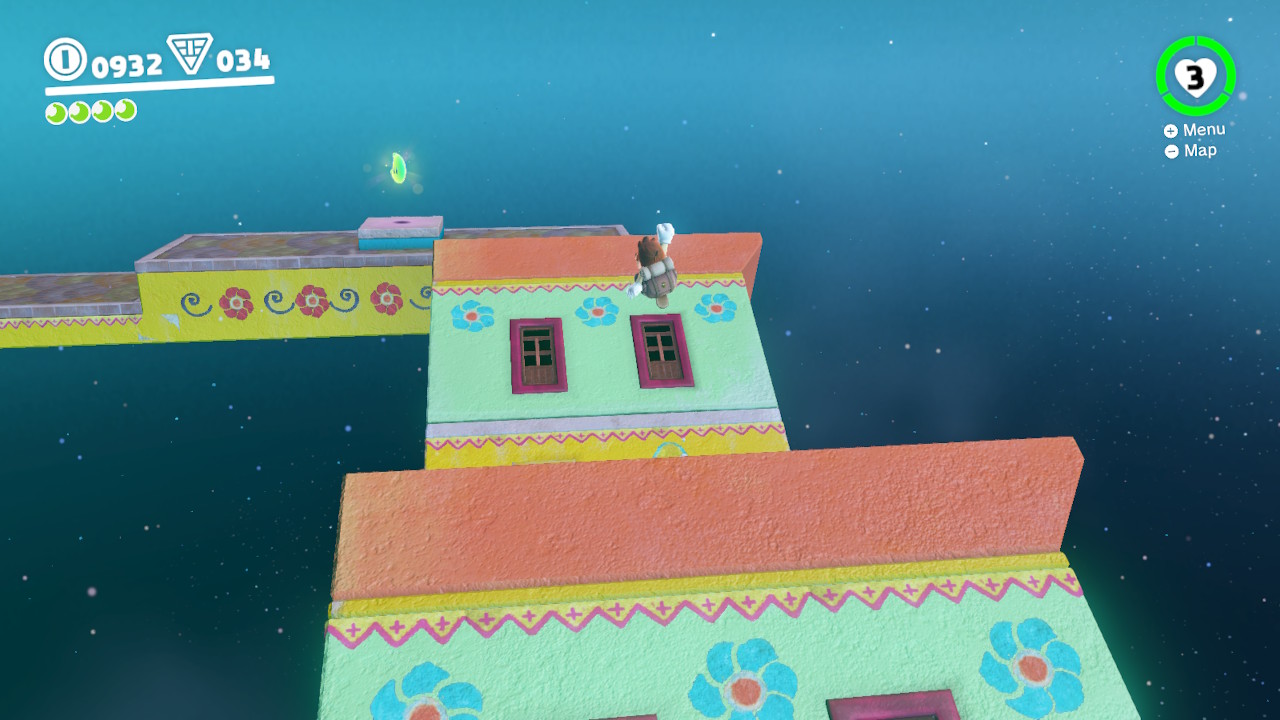 With the way you change abilities constantly, the game often resembles a Kirby game.The innovation and inventiveness shown in the game is admirable. No matter how creative a solution you find, the game will reward you for it, whether that's with a Moon or one of the many other collectibles in the game.

However, outside of this Cappy does so much to help the game. It's your primary method of interaction with the world. The hat can be used for double-jumping, attacking enemies, opening doors, and breaking boxes. It's a safe bet that no matter what you encounter through Odyssey's myriad strange and wonderful levels, it's a safe bet to throw your hat at it and see what happens. 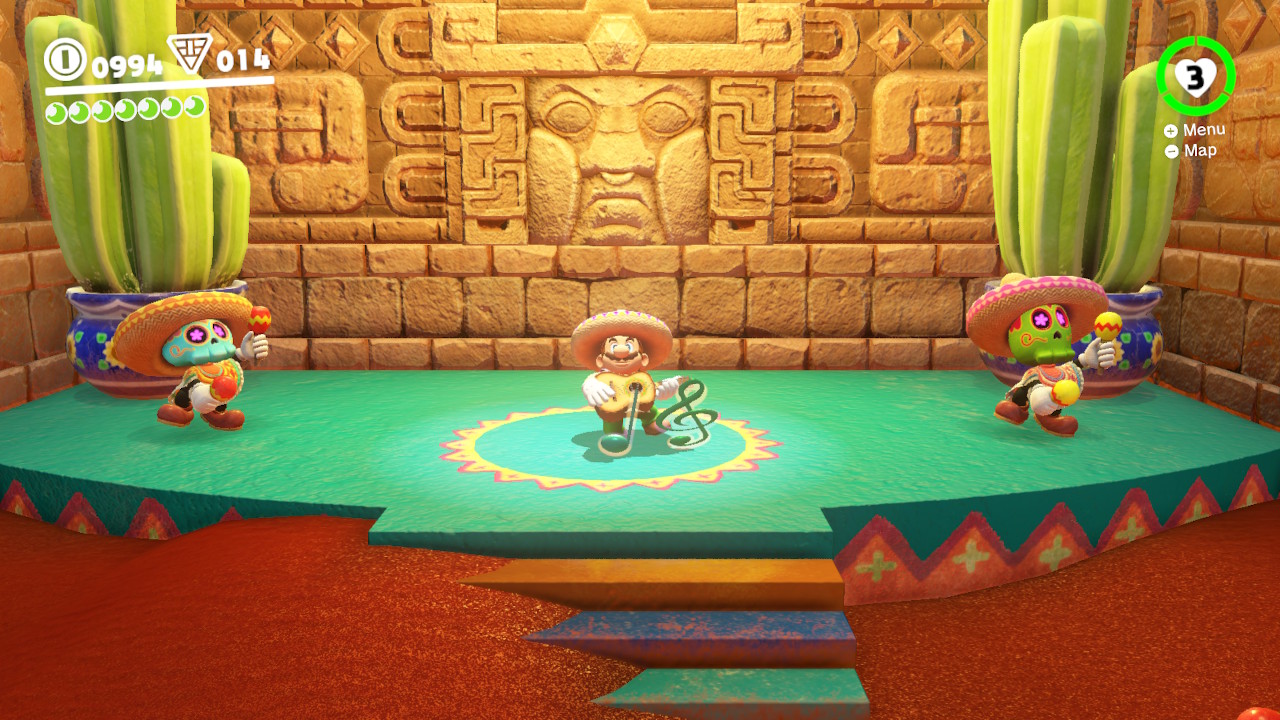 Mario isn't a slouch either and has several different types of jump, letting you bounce off walls, dive, and somersault depending on which combination of buttons you use. His corner jump is missing, which makes him feel slightly less agile than you might be used to, but he's still one of the most versatile platforming heroes when it comes to getting around.

Each world you go to has several phases, and as you defeat each boss these worlds change. The first real world you visit after some light tutorials is a desert planet populated by sombrero-wearing skeletons. When you first arrive, the desert is frozen, but a few boss fights later and the world and the people in it starts to change. This opens up new opportunities to get your moon on, and in several cases tells a story. This worlds are storied and irreverent. 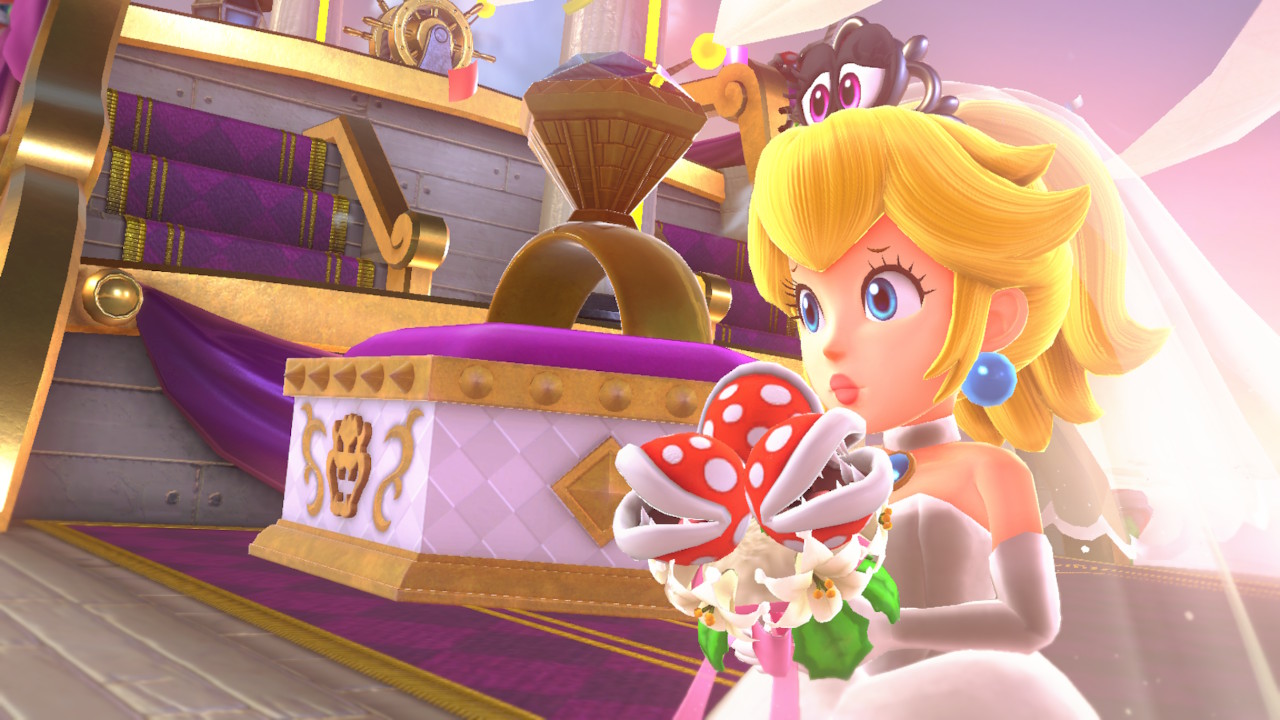 There's an argument to be made that the game is too easy. As an example, one boss has a hat that he tosses at you. If you hit it with your hat, it flips upside down to reveal a picture of a flower. For this entire level you've been using flowers to double jump, so when you see the flower you jump on it and it flings you into the air in the same way as the flowers you've been using. This is how the game teaches you; the signposting is clean, and most of the time, before you get to a problem, you've already been taught how to deal with it. This meant that, aside from a few misunderstandings, I didn't have much trouble with anything right up to the credits. 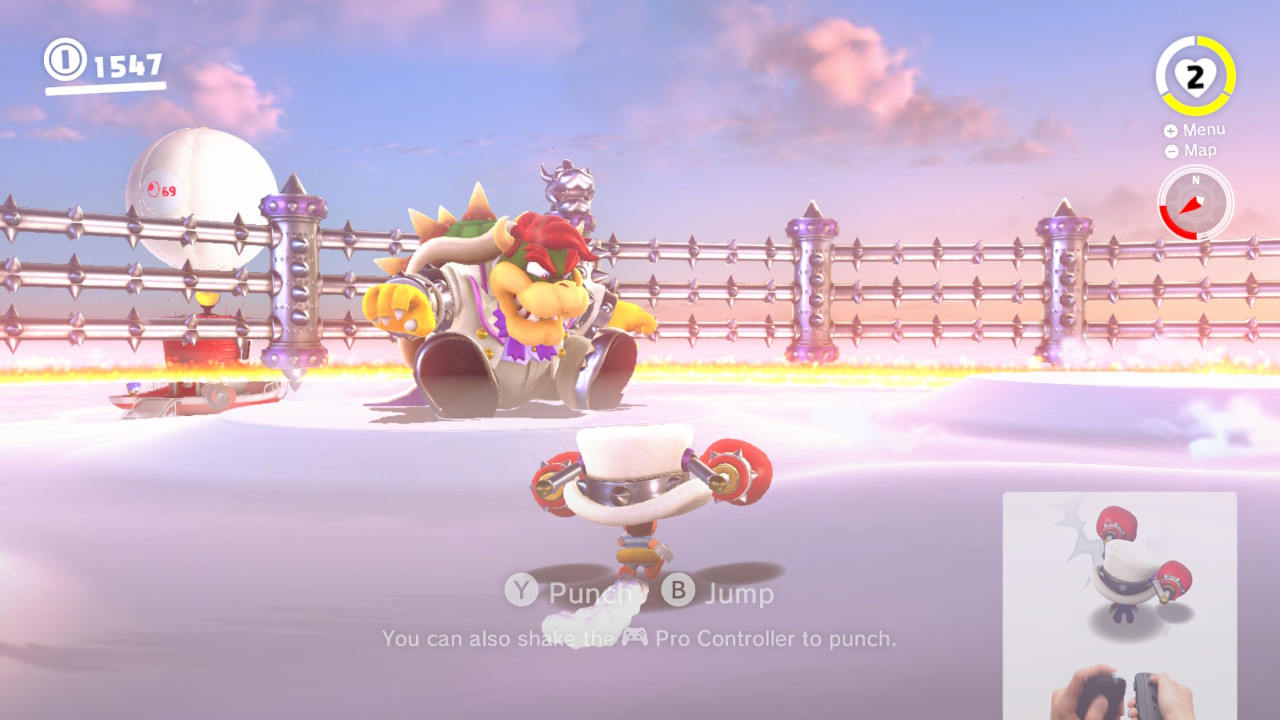 However, past that, some of the harder levels emerge and force you to really show off your skill. For those who want challenge, that's here.

Super Mario Odyssey is an instant classic both in terms of design and execution, and while it might seem like I'm gushing — and I am gushing a little bit, but it's deserved — this is clearly a game made by people that care a whole lot about Mario. This deep understanding of the character and franchise means that there are numerous little jokes and nods contained within the game, but there are also gameplay elements that've been carried over too: Early in the game you'll find yourself flattened down and forced to run through a 2D Mario level. Die, and the familiar musical sting will play. You can run through pipes, slide under Chain Chomp attacks, and try to forget Luigi exists. 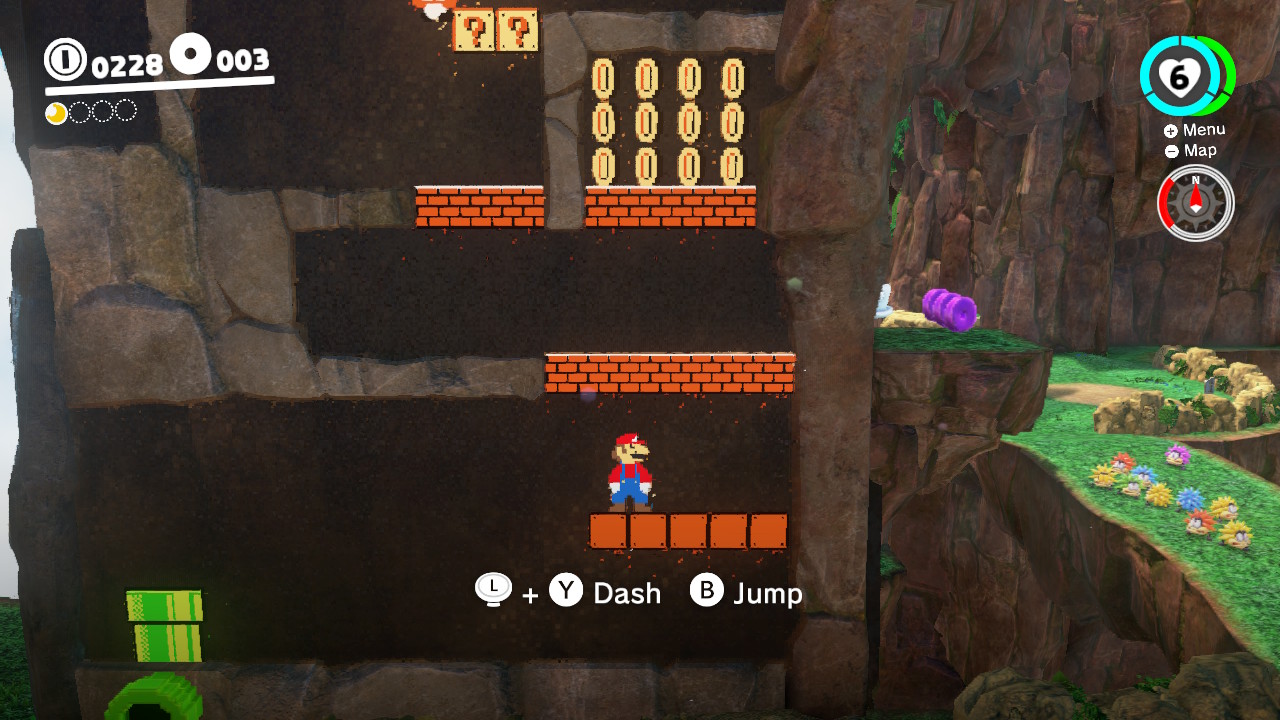 This double-down on everything that makes Mario Mario isn't without a few minor faults. While many of the levels are excellent, a couple don't quite stand up to the standard set in the game, with weaker elements standing out all the more because of the generally high quality. The game occasionally forces motion controls on you, which is annoying but manageable if you're playing it docked with a Pro controller or Joycons in a grip. If you're playing the Switch on the move though, it's tiring to have to rapidly move your Switch to pull off moves. Motion controls are rarely a positive addition to any game, but here they slightly mar probably the best platformer of the year.

Should you buy this? Unequivocally yes. If you hate platformers or fun than you can probably skip over it, but Super Mario Odyssey manages to distil everything exciting about the Mario series: joy, a brightly coloured world, and new and exciting mechanics all tied up into a nice bow. Bravo. 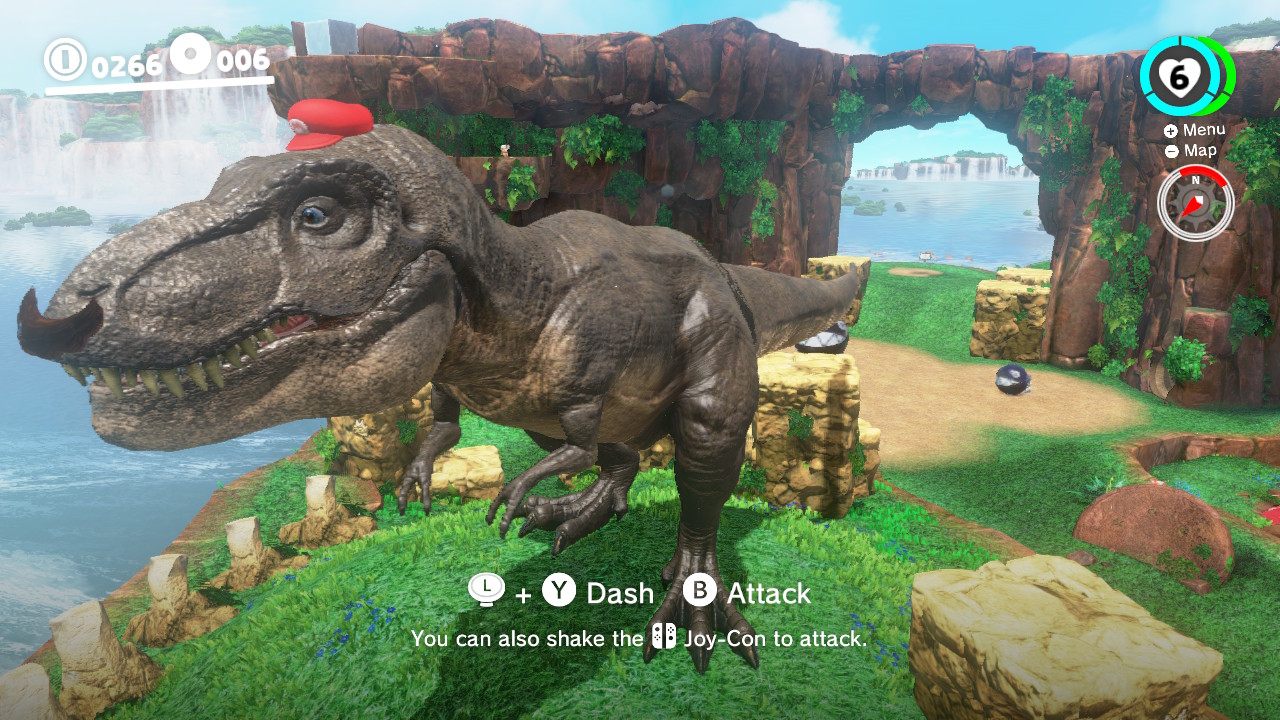 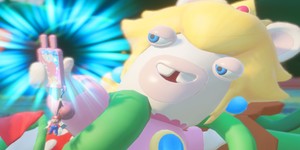