Before we begin this review, a confession. I hadn’t been particularly looking forward to reviewing Overwatch, as I’d pretty much decided it wasn’t a game for me. I don’t mind multiplayer shooters, but aside from a few exceptions (Unreal Tournament, Planetside, Siege) I have no great love for them either, and the frequent references to Overwatch’s MOBA-like qualities had more or less put me off the idea entirely.

Within minutes of entering my first match, I knew that I had been wrong. After a couple of hours, I was ashamed of my past self for being so stupendously, phenomenally misguided. For the second-time this month, an FPS has come along and surpassed my expectations like the Millennium Falcon at the moment it enters hyperspace. Overwatch is simply brilliant, an incredibly slick, surprisingly accessible multiplayer shooter that rewards tactics and teamwork like no other. It's also worth dispensing with the most commonly touted myth about Overwatch (a myth which I too believed). It is not a MOBA. It takes a little inspiration from that genre in the diverse range of characters Overwatch offers, but in every other aspect it’s an arena shooter. In some ways it resembles Team Fortress 2. Emphasising silly fun, cartoon violence and unique roles for players. But it also diverges from Valve’s multiplayer masterpiece in several important ways.

The meat of Overwatch revolves around short multiplayer matches wherein two teams of six players battle over an objective in the centre of the map. There are a few variations in game mode, but they’re all simple things; capture and hold a control point for a certain amount of time, escort a payload to a particular point on the map, a Rush-style mode where teams take turns attacking and defending a sequence of fortified areas. This broader structure is very straightforward, relying on tried and tested methods to bring teams into conflict. Where Overwatch becomes interesting is in its roster of heroes. Players assume control over one of 21(!) colourful fighters, each with unique weapons, abilities, and attributes. It’s through these characters, and their almost infinite combinations on the battlefield, where the complexity and nuance of Overwatch emerges.

To give an example, one of the staple characters in Overwatch is Bastion, a bulky robot fellow who has the ability to transform into an extremely powerful, player controlled turret. Placed in an area with good line of sight and cover on the flanks, Bastion can cause massive trouble for an opposing team, suppressing a defensive force so your teammates can move forward, or preventing an attacking force from advancing, or simply mowing down enemy players with impunity for a laugh.

Despite the game being out for little over a week, Bastion is already the source of relentless griping. Bastion is cheap. Bastion is overpowered. Bastion ate my cookie. Bastion broke my toys. Wah wah wah. Such complaints miss the point of Bastion entirely. Bastion is the base-level strategy for a team, a way to quickly establish a fortified position and work forward from there. Figuring out how to beat him on the opposing side will form the introduction for many players to how Overwatch works. There are numerous characters who, when working together, are effective at dealing with Bastion. Reinhardt is another tank-like character, carrying a large hammer and an even larger energy shield, which can soak up a huge amount of damage and provide cover for an entire team. He can stop Bastion’s onslaught long enough for other players to concentrate their fire on him. Alternatively, you could use Tracer, a nippy and lightweight character, able to teleport short distances and rewind her own timeline. Tracer can easily evade Bastion's sights, shaving chunks off his health bar with needling blasts of her twin pistols, or simply keeping him preoccupied while other players deal heavier damage. There are at least three other characters who have effective counter-tactics to Bastion’s turret deployment, while the remainder can complement those characters with their own abilities. 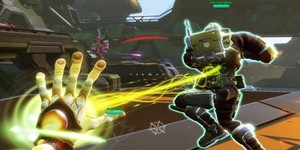 2016 was one of the most innovative years for shooters in memory. 2017 should capitalise on this.