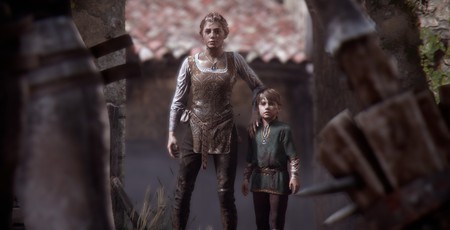 Rats! I’ve never thought much about them. To me they’re just Big Mice, or if they’re particularly large and intelligent, Pointy Cats. The most I’ve ever thought about a rat was watching the Pixar film Ratattoiule, a word that I’ve just this second discovered I don’t know how to spell. Rattatouile. Rattatoiulle. Argh! The Adventures of Remy the Cartoon Chef Rat. (Ratatouille - ed.) But Pixar’s film is no longer the best (and only) entrant in the genre of French rat fiction. It now sits proudly alongside A Plague Tale: Innocence, a game which, frankly, I’m astonished exists at all. I can’t say that 'third-person adventure set in plague-ridden medieval France' would score that highly on my list of dream games, probably ranking just above 'persistent-online looter-shooter set in Nottingham on a Saturday night'.

So you can imagine how I feel, sat here trying to figure out why it’s one of my favourite games of the year so far. Jesus rat-Christ on a tiny rat-bicycle, A Plague Tale is good. You can imagine it as The Last of Us with rodents, structurally but also in the general quality of design. In fact, and I will freely admit that I’m not 100 percent certain on this, but…A Plague Tale might be the better game? Ooh, that’s bold, isn’t it? Let’s dig into that.

Premise time! A Plague Tale is set in the year of our Lord 1348, and puts you in the shoes of Amicia, the teenage daughter of Lord DeRune. Amicia lives a relatively comfortable life in the DeRune’s rural chateau, spending much of her time on hunting trips with her father. But it's not all laughter and sunny walks in the DeRune household. Amicia's little brother Hugo is afflicted with a mystery illness, while her mother spends most of her time locked away with Hugo trying to make him better, neglecting Amicia as a result. These problems swiftly become irrelevant when the Inquisition comes to town, laying waste to the DeRune’s lands and forcing Amicia to flee her home with the brother she barely knows.

So begins a moving, dramatic, and incredibly grim adventure through Medieval France. It’s also astonishingly well produced. I’ve often been critical of the games Focus Home Interactive publish for having less-than-stellar productions, particularly when it comes to things like animation, writing, and voice-acting. A Plague Tale is easily the most accomplished game Focus Home has published. I don’t know how much that has to do with Focus Home itself, and how much is down to Asobo Studio (which apparently comprises just 45 people), but my goodness this game is slick. It’s absolutely stunning to look at. The game has around 16 linear levels, and sees you traversing through hugely elaborate buildings, lush forests, and sometimes entire towns. Two levels in particular blew me away; one involves navigating a vast battlefield piled high with dead bodies, while another sees Amicia sneaking her way across an entire medieval city with no break in flow whatsoever.

The writing and voice acting are also first-rate, whether you play it in the original French or the English localisation. The dialogue is naturalistic and the characters incredibly well drawn. It’s not hard to imagine how easily a game could screw up a story about a relationship between a teenage girl and her vulnerable kid brother, but A Plague Tale works its material beautifully, and I was completely invested in these two characters and those around them. There’s also much more to the story than I anticipated (in some ways too much, as I’ll get into later). As you progress through the game, Amicia and Hugo are joined by several other children all trying to survive between the rock of the Inquisition and the hard place of the rat plague. The later game focuses more on this small child community, and the scenes between them bantering and bickering and just trying to get on with life provide some much-needed relief from the frequent horrors you experience on your journey.

Speaking of which, hoo boy does A Plague Tale get dark. This probably shouldn’t be surprising given the title, but it’s worth noting that A Plague Tale isn’t just about the plague. It throws all the horrors of the fourteenth-century crisis at you, from war to religious extremism. An early level involves sneaking through a farm where the Inquisition has slaughtered hundreds of animals, including a scene where you must walk over the bloated, decomposing corpses, the integrity of which under Amicia’s feet is less than guaranteed. And then, of course, there are the rats. Writhing, roiling, teeming masses of black bodies that move like oil if oil had teeth. The way the rats move and mass is as astonishing as it is terrifying, although the individual rats can look quite glitchy if you examine them too closely. For the most part, though, you’ll be too focussed on avoiding them to scrutinise them that much.

As well as being the main source of tension in the game, the rats also form your primary mechanical interaction. My main concern with A Plague Tale before playing was that it would be too lightweight from a systems perspective. For the first couple of hours that is the case, amounting to a very light stealth puzzler. You spend most of your time sneaking between guard patrols, and throwing stones and pots to distract the Inquisition while you slip past. When the rats get involved, however, things become more interesting. The rats are afraid of light, and so light becomes your main puzzle solution. At first, these puzzles are very basic, but via the game’s alchemy-based equipment system, over time you gain access to more items that let you ignite and extinguish lights, and even persuade swarms of rats to move to certain places. If there’s a guard in your way carrying a torch, for example, then using 'Extinguis' to put his torch out will enable the rats to solve that problem for you in their own horrific way. You’ll also occasionally have to fight enemies using Amicia’s slingshot, but unless the game specifies otherwise, stealth is always your best option for survival.

The game evolves considerably over the course of its 10-15 hours, adding plenty of new mechanics and turning existing ones on their head. It isn’t perfect, however. The stealth has pretty hard fail-states, and combined with the checkpoint-save system, that results in a few very frustrating sequences. Also, from a story perspective, the first half of the game is better than the second. The shift from a The Last of Us escape adventure to medieval Stranger Things costs the game some of its flow, while the plot becomes increasingly silly and supernatural as it propels toward its conclusion. In particular, the last level is utterly ridiculous (although admittedly spectacular).

Ultimately, though, the strength of the characters saves A Plague Tale from descending too far into B-movie horror territory. Again, making what is for the most part a 10-hour long escort mission featuring a small child could have gone wrong in so many ways, and the fact that A Plague Tale is not only fine but utterly absorbing goes to show what a talented bunch Asobo Studio is. Mark my words, this developer is one to watch. Your move, Naughty Dog.