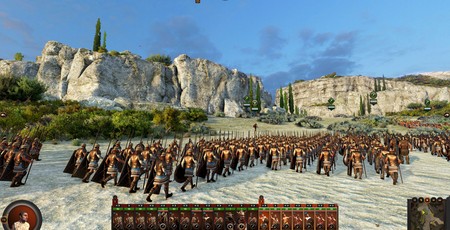 The Total War series has conquered history and raided the shores of fantasy, but A Total War Saga: Troy marks the first time the series has invaded the realms of myth. Where Three Kingdoms merely dabbled in the romances of Ancient China, Troy throws itself fully into Ancient Greek legend, building entire systems around ideas explored in Homer’s Iliad and Odyssey. It’s a bold and surprisingly innovative spin-off, although it doesn’t quite kindle the passion that is the driving force of the Trojan war. From Troy’s first turn onward, things are a little different from your typical Total War affair. While the fundamentals of fighting battles, conquering cities, and growing your infrastructure are present as you’d expect, your efforts are all directed to one goal – the capture or defence of the ancient city of Troy. It’s a much more focussed experience than Total War usually is, with everything you do building up to one, climactic encounter.

Yet despite the clarity of focus, playing Troy isn’t as simple as picking either the Greeks or the Trojans for a one-on-one grudge match. These two forces are actually loose coalitions of multiple city-states. You only get to pick one of these states, each of which is led by a great hero of the Trojan war. On the Greek side one can choose from Achilles, Odysseus, Agamemnon, and Menelaus. On the side of Troy, the roster includes Hector, Paris, and Aeneas. Each of these heroes leads their faction in a different way, expressed in unique systems and abilities that dramatically affect the trajectory of any given campaign. If you play as Agamemnon, for example, then your campaign is all about consolidating your wealth and power. The King has the unique ability to create vassals and demand regular tribute from them, filling his stores with resources without having to pay for city upkeep. Achilles’ leadership, meanwhile, is driven by emotion and his prowess on the battlefield. Winning battles makes his fame grow and his faction perform better, but Achilles is also prone to frantic mood swings that can bolster his military or send his economy into chaos.

This idea of personality-driven factions is something Total War has experimented with for a while. From a mechanical perspective at least, Troy offers the best iteration of it. On the Trojan side, for example, Hector and Paris compete for the favour of the father (and King of Troy) Priam, and earning it will confer bonuses onto their faction. One of the weirdest characters is Aeneas, who can receive “Orders” directly from the gods and carry them out as unique missions and confer with the spirits of dead warriors for different bonuses. It gives you a strong sense of these leaders as unique individuals, and it’s fascinating to discover how each one plays. Alongside this, there are two other ways in which Troy differs from other Total War games. Firstly, Troy introduces a whole new set of resources and rejigs the trading system to better reflect the game’s proto-historical setting. The five resources are food, wood, stone, bronze and gold, and are produced by a region’s provincial settlements (i.e. not cities). Each settlement specialises in one resource, and if you own it, can be upgraded to produce more of that resource.

Depending on your starting location, you may well find yourself with an abundance of one resource and a shortage of another. Fortunately, you can barter with other factions for mutual exchanges of resources. Playing as Agamemnon, because of my large armies I was perpetually short on food, but always had loads of wood to spare. Hence, I’d usually have several trade deals going at once with my allied factions. I much prefer the clarity of this system to the opaque trade routes of Three Kingdoms. It’s nice to know where exactly the resources are coming from. Unfortunately, it also means that AI factions are constantly pestering you with diplomatic junk mail, trying to get some ridiculous amount of stone or bronze for three twigs and one grain of wheat. It’s extremely annoying and undermines what is otherwise a well-designed system.

The other area where Troy makes big changes to Total War is battles. Although based on myth, Troy is nonetheless the farthest back in time any Total War has ever gone. This means the historical basis for weapons of war is limited. For example, archers are a fairly advanced unit in Troy, while cavalry barely features at all unless you play as one specific faction. Creative Assembly has compensated for the limited technology of the time in a couple of ways. Firstly, the divisions between infantry units are greatly expanded. Not only do melee and ranged units have multiple types – spearmen, axemen and swordsmen for the former, slingers, archers, and javelin-throwers for the latter, individual units also have different overall weights, which affects attributes like unit speed and charge power. This broadens the diversity of infantry combat, with units that specialise in skirmishing, charge-and-retreat tactics, and frontline assault/defence.

The more dramatic change, however, is the introduction of “mythical units”. By appeasing the gods through building temples and sacrifice, or by conquering specific locations, you can unlock the ability to recruit centaurs, harpies, sirens, giants, and even a Minotaur. Yet while these are “mythical” units in terms of their prowess and durability, they aren’t presented as supernatural beings. Instead, they’re more like exceptional human warriors. The Minotaur, for example, is a huge, lone warrior wearing the skull of a bull as a helmet, while the centaurs are nomadic cavalrymen who paint themselves in different colours. Essentially, Troy adopts a historical perspective on the legend of Troy. This doesn’t make mythical units any less awesome in combat, of course. Your giants and your Minotaur still tower over regular soldiers, creating visible shockwaves when they barrage into an enemy line. Additionally, these units further deepen the strategic layers to the game’s infantry combat.

These are Troy’s most notable feature, but the list of Troy’s plus point doesn’t end there. Both the campaign map and the battle maps are stunning to look at, and both offer plenty of strategic and tactical choices. The spread of resources and epic units on the campaign map means choosing your next strategic target requires serious consideration. Moreover, the rugged topography of the battle maps causes frequent choke-points and elevated positions that you can take advantage of. The game’s approach to religion is interesting too. Building temples and making sacrifices to a specific god confers bonuses upon your faction, while ignoring gods can incur their wrath, resulting in “random” events like floods or earthquakes ravaging your faction. For all that Troy does well however, there are several issues. While open battles are generally great, sieges are tedious affairs due to the lack of siege engines. In addition, despite the presence of Satyrs and Gorgons in their ranks, agents on the campaign map are undercooked. I’ve had my faction prowled by half a dozen enemy priestesses and couldn’t tell you what they’d actually done to hinder my progress.

Troy’s biggest issue, however, is that despite the fantastic setting and the personality-driven campaigns, tonally it’s an oddly staid experience. The Trojan War is a perfect fit for the personal politics that Creative Assembly experimented with in Three Kingdoms, but those systems are not included in Troy. As a result, alliances are purely functional affairs, while characters don’t interrelate in any meaningful way. This might sound like a strange thing to complain about in a strategy game. But ultimately, that’s what the Trojan War is. It’s a war driven by passion and emotion. By love, anger, vanity and hatred. Troy succeeds in turning these emotions into interesting mechanics, but those mechanics in turn fail to convey the emotion expressed in the Iliad. Don’t get me wrong, Troy is a well-made strategy game, and one that I’d happily recommend. It’s just a shame that all its ideas don’t quite succeed in generating the high drama at the heart of the Trojan war.