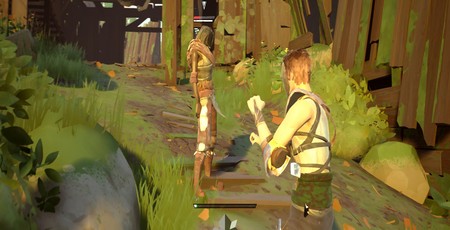 Absolver positions itself rather awkwardly between arena fighter and MMO, a hybrid single and multiplayer game that's a little bit Dark Souls, a little bit Journey, a little bit For Honor, and not nearly enough of its own identity. It's a game filled with lots of small good ideas spoiled by a couple of big bad ones. I find myself rather frustrated by it. The nanometre-thick wrapping that Absolver calls a story is set in the world of Adal, a sunny but evidently dying realm straight from the Dark Souls mould. It revolves around a group of mysterious masked fighters called Prospects, all on a quest to reach the top of a crumbling tower to defeat a big boss whose name I can't remember, in order to become an Absolver, a kind of magical sensei with the ability to protect and instruct other Prospects.

That's the plot, such as it is. But what Absolver is really about is punching and kicking other Prospects until they fall over and disintegrate. About 90 percent of the game revolves around the combat system, which is a rich and complex representation of hand-to-hand martial arts, distilled into a compelling, easy-to-learn, hard-to-master framework. At a rudimentary level, you press the left mouse button to launch a flurry of connected strikes, and the right mouse button to unleash a single, powerful alternative attack. Pressing Shift will block enemy blows until your stamina bar runs out, while hitting space will cause your fighter to dodge away from an opponent. These basics are easy enough to learn. Where things become more complicated are the stances. Your character can assume one of four stances, each of which triggers a different starting attack, such as a speedy reverse-roundhouse kick, or a deceptive spinning elbow attack. In addition, when you start Absolver you select from one of three different fighting styles, which ultimately amount to strong fighter, fast fighter, and middling fighter.

From the off, Absolver's combat system impresses in its layers and complexity. Once you get into the meat of the game, however, it becomes clear that this is just the tip of the iceberg. The world of Adal is more or less open to explore as you like. But to climb the tower, you must defeat several bosses and sub-bosses dotted around the map. Doing so will not only bring you closer to that ultimate goal, it also provides you with special abilities such as healing, special attacks, and unlockable melee weapons like swords. Even this isn't the end of it, because you can also learn entirely new moves and attacks by successfully defending against them when used on you. Blocking and parrying these attacks slowly fills a meter until the move is unlocked, whereupon you can use it to create custom move-sets. You can also collect clothing and armour as you explore, which adds further nuance to the fighting by forcing you to decide between speed and protection.

All told, it's a good combat system, slickly animated and with a satisfying sense of weight. That said, I don't think it's a great combat system. It feels oddly...sticky, lacking the flow of more dedicated fighting games and Ubisoft's For Honor. Meanwhile, the sheer number of potential permutations, combined with the fact that many stances and moves appear quite similar, means that reading opponents effectively takes almost as long to learn as a real-life martial art. The bigger problem with Absolver, however, is that this huge and complex combat system is contained within a game structure that feels comparatively meagre and undercooked. As I mentioned, the world of Adal is one of decaying beauty, where lush forest glades and dramatic cliff-faces combine with crumbling citadels and abandoned villages, all rendered in a gorgeous painterly style. But it's a world almost entirely devoid of background or context. The handful of NPCs who speak to you rather than attacking on sight mostly exist to exposit information on how to play, rather than offering any insight into the world.

The frequent appearance of other players goes some way into filling this narrative gap. Players share the same world, and there's no clear distinction between friend and foe. This results in some great emergent martial arts sequences. In an early encounter with an AI sub-boss, I was doing an extremely good job of getting my head kicked in when another player leapt into the fray and bought me enough time to recover, and then we finished him off together. In another, very different scenario, I accidentally attacked another player, and he ran off in a panic. I chased after him, only to find him surrounded by a half-dozen NPCs. To atone for my previous error, I jumped in and fought alongside him. I'll never know if he forgave me or not, but I know that I did all I could to rectify my mistake. Emergent scenarios like this are undoubtedly when Absolver is at its strongest. Unfortunately, there isn't really enough of Absolver to experience many moments like it. Ascending the tower and becoming an Absolver is unlikely to take you more than a few hours, after which you're left to wander the game's small world either seeking out PvP or training other Prospects. Oh, and of course, learn basically all of the new moves that the game offers.

This is by far Absolver's most significant flaw. Unlocking any new move involves a considerable amount of grinding, exhaustively blocking or parrying enemy attacks until the circular meter finally creeps its way to completion. You'll be lucky to unlock more than a handful before you reach Absolver status. What's strange is that Absolver also sports a more traditional RPG system of levels and equipment, and I don't understand why unlocking moves isn't linked more closely to that. Letting you pick new moves you like the look of every time you level up would not only make those choices more meaningful but remove the need for all those big bouts of blocking. I suppose Absolver's method is more “realistic”, but it's also far more tedious and laborious. I get the sense that Absolver was intended to be a larger game than the final version is, that the developer had a choice between expanding the world and deepening the combat system and resolved to go with the latter. Or perhaps it just wanted to build a slightly more ambitious framework around what is essentially a multiplayer arena brawler. Either way, the final product didn't quite work for me. I think the fighting is decent, and the blend of single and multiplayer is capable of generating some fun combat scenarios. But there's also too much unrealised potential here for me to recommend outright.