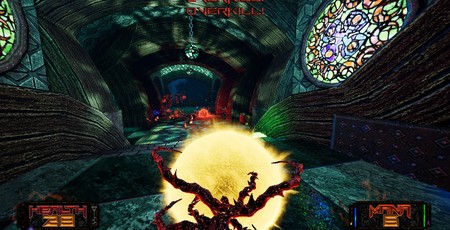 This isn’t a list of Doom’s original seven weapons. It’s a map, the perfect guide to structuring your FPS, attaining that gradual upsweep, that thrilling sense of escalation. It’s a guide that almost every FPS has approximated since. You might see them under different names, with a few additions, or in a slightly adjusted order. But fundamentally, this is the tune that every shooter has danced to for the last 20 years. Imagine, however, that we could go back, wipe our FPS memories, and play Doom again for the first time. How would it feel to depress that left-mouse button without decades of built-up knowledge about how that pixelly black tube at the centre of your screen would respond? What would it be like to play an FPS without instinctively knowing what the weapons are going to do?

Let me introduce you to Amid Evil, a game in which the weapons are not pistols, shotguns, and machineguns, but rather staffs, tridents, and Morningstars, all imbued with some eldritch, arcane power. But you won’t know how these weapons work until that glorious first press of the left-mouse button. If you remember Hexen and Heretic from the mid-90s, well, Amid Evil essentially channels the same Mana, although the developers have stated that they did not deliberately attempt to create a successor to Raven Software’s fantasy shooters. Rather, the game they wanted to make happened to fall along similar lines.

Either way, what we’ve got here is some stripped-down, white-knuckle FPS fun that involves moving, shooting, and as little else getting in the way of those two things as possible. You play a nameless hero in a nameless fantasy realm that has been corrupted by a nameless evil, and it’s your job to cleanse this infestation using the most creative and intelligently thought-out weapon-set I’ve seen in an FPS for quite some time. Seriously, Amid Evil’s weapons are both literally and figuratively fantastic, to the point where I don’t want to overly spoil what it feels like to use them for the first time. Instead I’ll give you a vague rundown. You start out with an axe that you’ll hardly ever use, despite it being pretty good at slicing enemies into sushi. During the first level, you’ll quickly pick up the Staff of the Azure Orb, which forms your basic weapon. After that you’ll get the Whisper’s Edge, which is more interesting, vaguely analogous to a shotgun in function, but only vaguely.

Then you’ll pick up the Voltride and say, 'Holy Shit.'

Then you’ll pick up the Celestial Claw and say, 'HOLY SHIT.' Then you’ll pick up the Star of Torment, which is my favourite weapon in the game, a sort-of dream combination of Unreal Tournament’s Flak Cannon and the Stake Gun from Painkiller. At this point you’ll probably just make an inhuman gargling noise because your endorphins have overridden your ability to speak. It is that satisfying to wield.

It’s a beautifully conceived roster, although I did have a big concern early-on, namely that Amid Evil might peak too early. There are only seven weapons in the game, and you’ll have seen them all by the end of the second episode (there are seven episodes in total). I was worried that Amid Evil might suffer from the plateauing issue of nu-Doom’s third act, only from a much earlier point in the game. As it turned out, however, this approach of front ending the weapons worked brilliantly for a couple of reasons. Firstly, it gives you the opportunity to learn the benefits and drawbacks of each weapon in different combat situations from early on. As a result, instead of weapons becoming redundant after the first few levels, I found myself frequently switching back to those early, less spectacular weapons right up to the end of the game. The Azure Orb, for example, is an excellent counter to flying enemies, while the Whisper’s Edge is useful for dealing with agile enemies who like to dodge around your attacks. Every weapon also has a powerful alt-fire that can only be used once you’ve collected enough souls, which helps to extend their novelty.

Secondly, by getting the whole "Here are your guns” bit out of the way early, it lets the developers concentrate on challenging you with stunning, elaborately crafted levels. Each of Amid Evil’s seven stages takes place in highly divergent environments, from the tropical stone temples of the Sacred Path, to the warped chivalric Kingdom of the Solar Solstice. Nearly all of these levels are superbly designed, blending complex, often mind-bending 3D design with a powerful sense of forward momentum. All the levels share this elongated, fisheye-lens look that both makes them appear incomprehensibly vast, and makes you feel like your hurtling through them, almost falling horizontally through each space. The movement in Amid Evil is wonderfully liberating.

The ride isn’t perfectly smooth. I found the Forges episode too inhibitive of progress, constantly trying to wrong-foot you with deadly traps and obscure pathways. More generally, I think Amid Evil would benefit from fewer pickups, as again you’re pulled away from the main thread of the level just a little too frequently, interrupting the otherwise intoxicating flow. Fortunately, Amid Evil makes up for these flaws in the last two episodes, which elevate the game’s design from generally excellent to utterly spellbinding. The final episode in particular is one of the finest examples of abstract 3D design I’ve ever seen, a bamboozling void of glittering purple glass that you navigate almost entirely through feel and intuition. It’s the FPS distilled into its purest form, and a marvellous climax to the game.

Yeah, screw it, Amid Evil is outstanding, a rollicking retro-FPS rollercoaster with level design that gives Dusk a run for its money, with seven cracking weapons bundled in, two of which have immediately hit the shortlist for my favourite virtual weapons ever. Between this and the equally excellent Dusk, the FPS is back, baby, and it is absolutely furious. 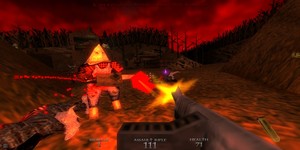