The goal of Amnesia is simply communicated in a letter that lays nearby your character at the start of the game. It tells you there’s a man in the basement who you need to go and kill. It hints that your amnesia is self-induced. Most importantly of all though, it tells you that there’s a monster chasing you – a darkness, or shadow.

Darkness is one of Amnesia’s most central themes, with players forced into paying constant attention to how well lit their environment is. The dark is inherently scary obviously, but it’s even more so when it’s full of lurking monsters and a monster itself. Your first impulse is to always stay in well-lit areas, but light is many things in Amnesia, so it’s not always as simple as that.

Light is, first and foremost, a safety net and a healing force. Throughout your adventure you have to monitor not just your physical health, but also your mental wellbeing. Lurking in the darkness for too long or rushing blindly into frightening phenomena will cause your sanity drop, creating hallucinations. The best way to recover is to turn the lights on and catch your breath.

Commentary nodes explain much about the level design
Unfortunately, light is also a fairly rare resource. There are lit candles in most levels that provide occasional respite, but most of the time you have to light them yourself. There are only so many tinderboxes and so much lantern oil available, so there’s an internal conflict already established as you try to save it up until you really need it.

On top of everything else, the deeper you get into Amnesia the more dangerous light becomes. Amnesia is not a first person shooter; there’s no miniguns or grenades to defend yourself with, so most of the time your only defence is to hide or dodge monsters as best you can. Standing in plain sight makes you an easy target, so you need to stay in the shadows as much as possible. Again, there’s a balancing act – light and dark both bring their own pros and cons.

Unfortunately, other areas of Amnesia don’t showcase quite such a sophisticated approach. One of the first puzzles in the game, for example, has you running around in search of various chemicals that are easily missed in the pitch black levels just so you can bypass a single veil of goop. Why can’t you just burn it down? And why does this goop, which is everywhere on the level, only block you in this one spot? It’s an obviously artificial barrier – one of those moments where game logic takes over from real logic – and it ruins an otherwise strong opening when you inevitably question it.

Bloody decorators, traipsing paint right through the house! .
Tiny niggles like this pop up regularly – why do you need separate tinderboxes to ignite candles that are right next to each other, for example? Why can’t you just light one and use it to light another? Unfortunately, the only retort to these issues is to shrug them off, reminding yourself that Amnesia is just a game after all.

Despite these occasional flaws, Amnesia as a whole, is still a very good game – definitely one of the most tense psychological horrors we’ve played in recent years. It’s not simply a monotony of horror either, as Amnesia works in different flavours of fright to keep things from getting boring. One level in particular, where you have to traverse a flooded section of hallway where the water itself attacks you, stands out – even if it is mostly to blame for my aching shoulders.

Amnesia isn't perfect, but it achieves it’s singular aim – to scare the hell out of you – with rare aplomb. The graphics, art design and soundtrack all combine brilliantly, layering up on top of a mostly brilliant design to create a unique, unnerving and ironically memorable survival horror that’s well worth picking up. 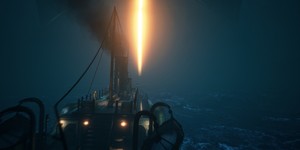