Attack of the Earthlings Review 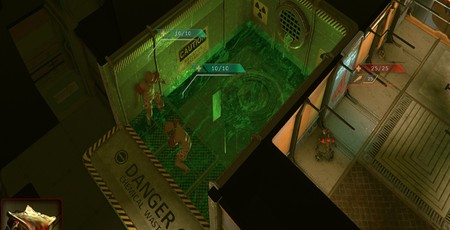 In a genre that rarely offers too many surprises, Team Junkfish's Attack of the Earthlings delivers a fresh new premise to turn-based tactics, and delivers a fair few laughs too.

Attack of the Earthlings' core premise is simple: It’s a level-based turn-based tactics game wherein players take control of indigenous aliens on their home planet when a giant drilling machine, dropped into orbit by a human megacorporation, crashes down to the surface.

These human invaders quickly run afoul of your plucky aliens before the aliens board the rocket and take the fight to the humans, repelling them with a variety of gruesome natural weapons. 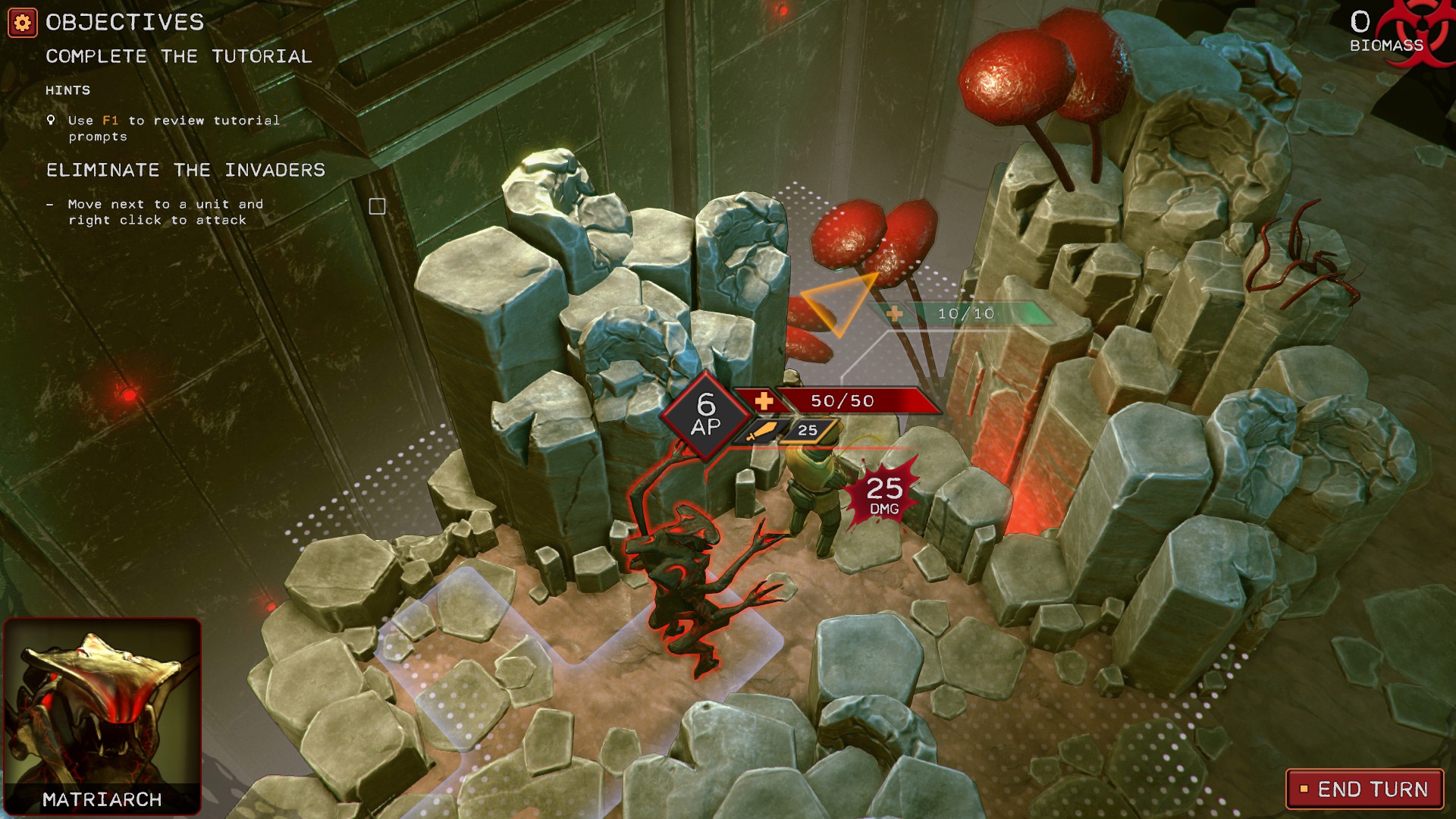 While there are several inventive games in this genre, Attack of the Earthlings offers the unique ability to relive your favourite Jurassic Park memories, re-enacting the 'Clever girl' scene as you ambush the human menace with the aliens under your control. These creatures really are alien, too, and in any other game they could easily fill the role of villains.

It’s hard not to feel a little bit like the bad guy, on reflection. Most of the humans in the early game are unarmed and frantically attempt to run away before you cut them down with a single blow. From here, you eat their corpses and use the biomass from your feast to hawk up and spit out a grunt to assist you, who will also try to go out into the world, create a few nutritious cadavers, and then ingest them. The flow is unusual, but it also means if you’re on the ball about eating corpses, you actually start to have a numerical advantage over your quarry, even if it’s not a technological one. 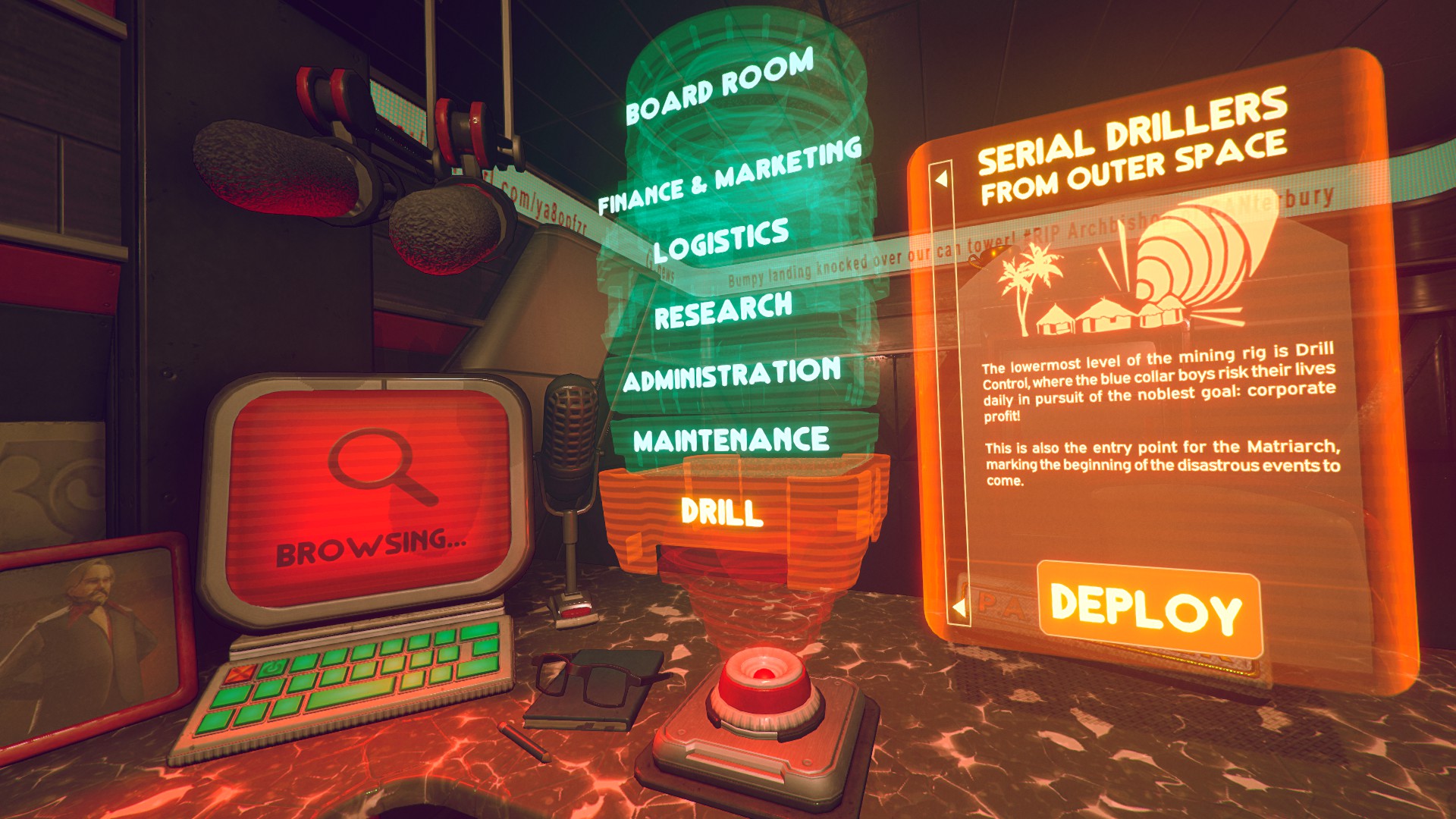 In the later game, as your enemy gets more durable and better armed, you’ll start to unlock extra mutations which give you more tactical options and enable you to fight with more nuance. This could involve a grunt mutating into a tank-like ally to soak up gunfire and hit like a… well, a tank. It could also involve developing ranged abilities or even mind-controlling humans to get them to do your bidding. 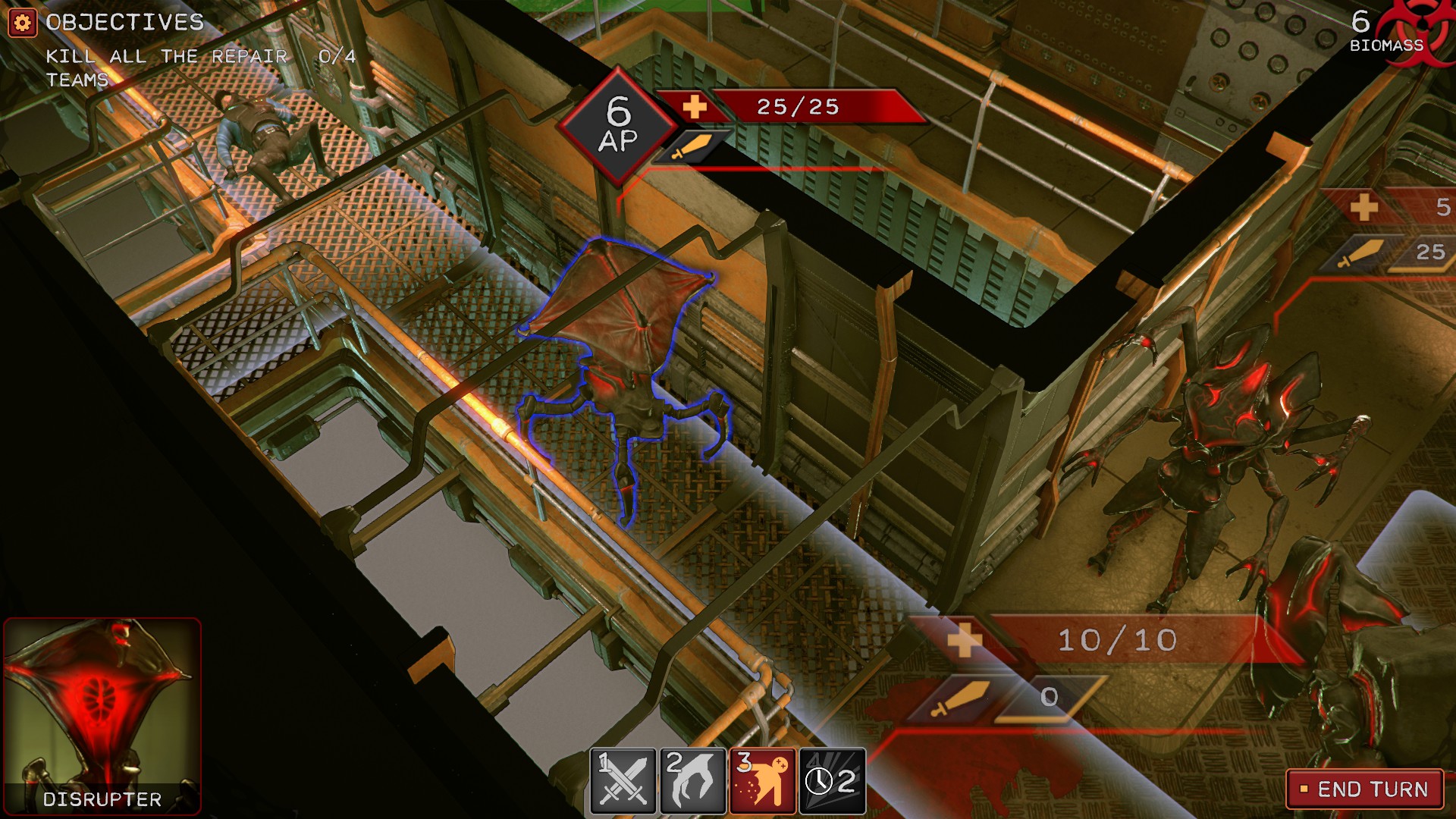 The combat is inventive although mechanically a little flat. For the first couple of levels, which function as an extended tutorial, you're mostly just using melee attacks and trying to catch people out that way. It's like a stealth game in a lot of cases, as unarmed characters will run for the nearest emergency exit, taking their sweet biomass with them if they make an escape. That can make the combat a little formulaic as you search for the best way to optimally slay everyone.

It opens up a little later, with some interesting interplay between the different unit types at your control, but it never quite achieves the same level of tension of some of its turn-based ilk, and as a result never quite delivers the payoff of elation when you survive against all odds, either. Your aliens are a marauding force, and it's rare during the game that I really felt in any danger of not completing my missions. 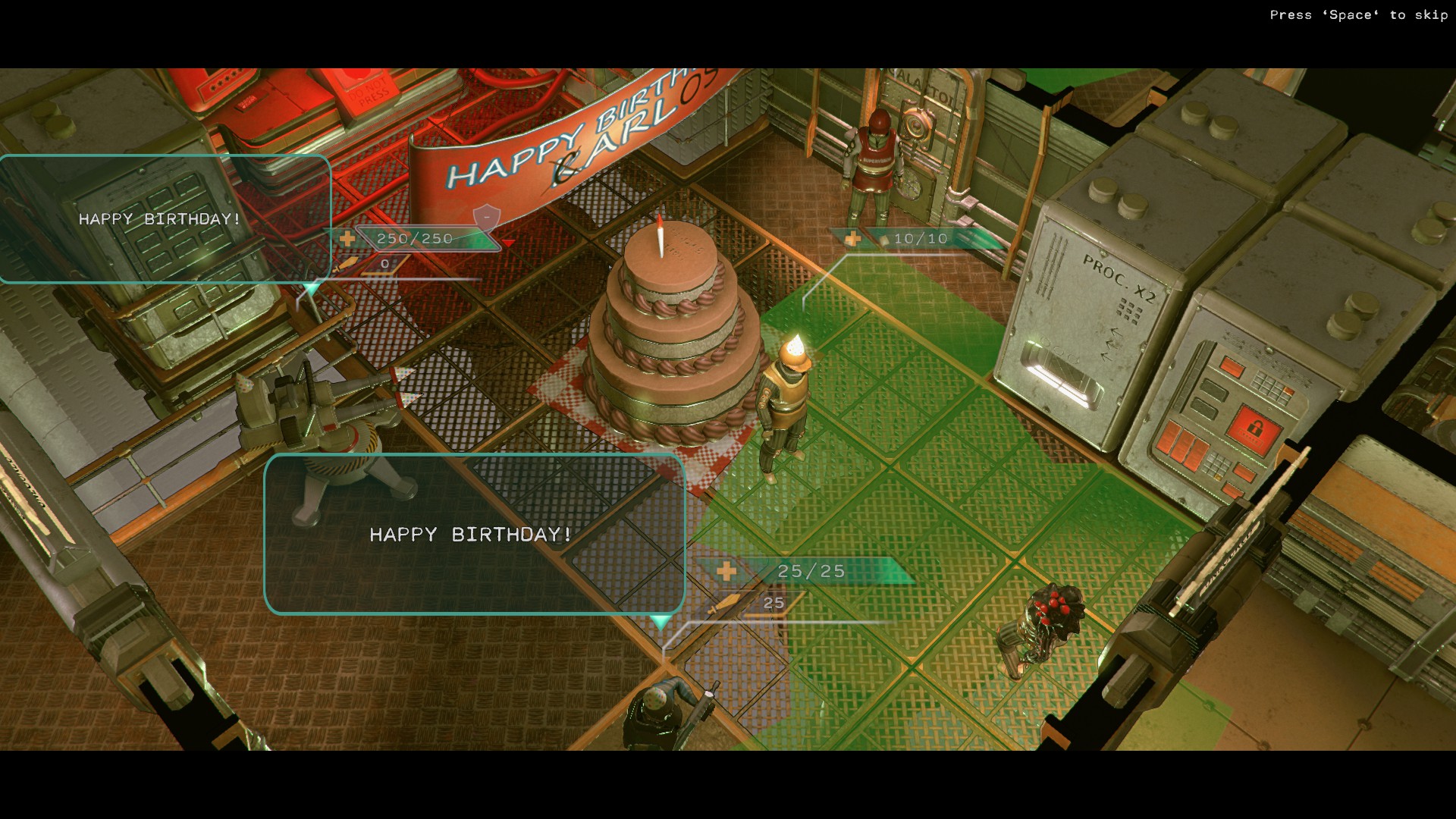 Still, I enjoyed Attack of the Earthlings immensely. The writing is genuinely funny, with several barbed jabs at corporate culture, and I laughed out loud several times playing it. This plotting, and the story the game wants to tell, seems to come first ahead of what the player wants to do. Still, several sights like workers in boxer shorts and water wings splashing toxic waste at each other, or AI turrets who have been programmed to care about their human charges screaming in anguish as you murder them, are all honestly funny.

It's just a shame that this short, story-led campaign is the only earthling attack you have to endure. 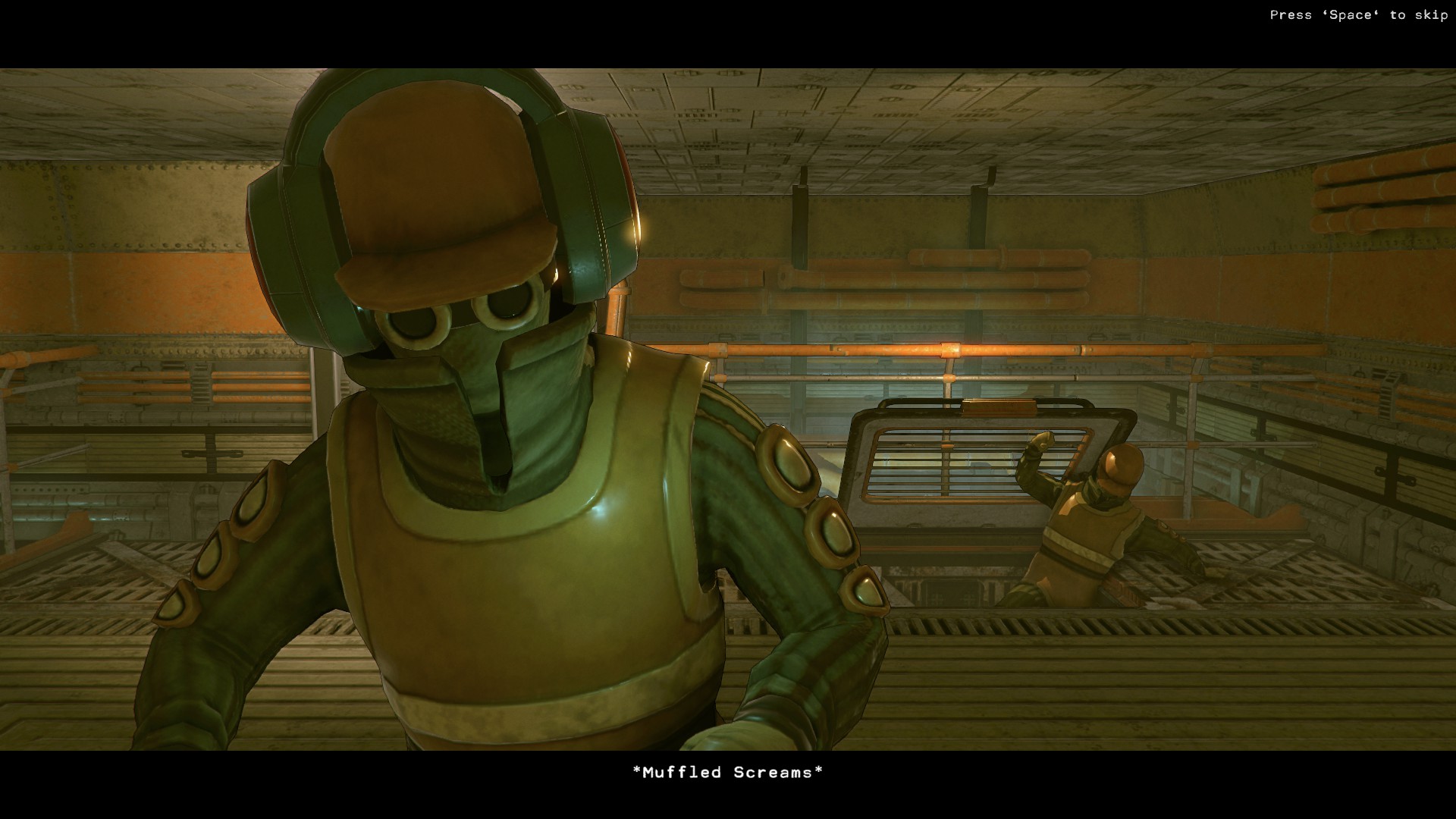 Similarly disappointing are the game's visuals, which are functional but betray the game's indie origins with some rote character designs and uninspiring aesthetics. It's a personal gripe, so your mileage may vary, but it would have been good to see more risks taken here to make up for the understandable lack of resources the indie developer had to work with.

As it stands, Attack of the Earthlings is a competent and engaging strategy that's unfortunately missing something that could elevate it to greatness. It's still a good game, and if there's an Attack of the Earthlings 2 I'm sure it'll be a big improvement, but there's a sense here that the game's interesting concept and solid writing is a little let down by its other aspects. Still, as a whole, the game is enjoyable, and if you've got eight hours to blow on a tactics game that doesn't take itself too seriously, this is worth your time.