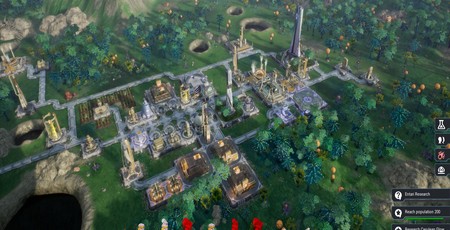 That's the overriding pressure during the early stages of Mothership Entertainment LLC's Tropico-like Aven Colony. Aven Colony puts you as the space-governor, trying to create a space-town on the space-planet Aven Prime.

Winter, much like on earth, is a miserable time and here threatens the productivity of your solar panels and valuable food-producing farms. In the early game, these are essential, and so in the early game — before you can afford geothermal power plants and climate-controlled greenhouses that reduce the bite of winter somewhat — you're always keeping an eye on winter, and it always seems to be right around the corner. 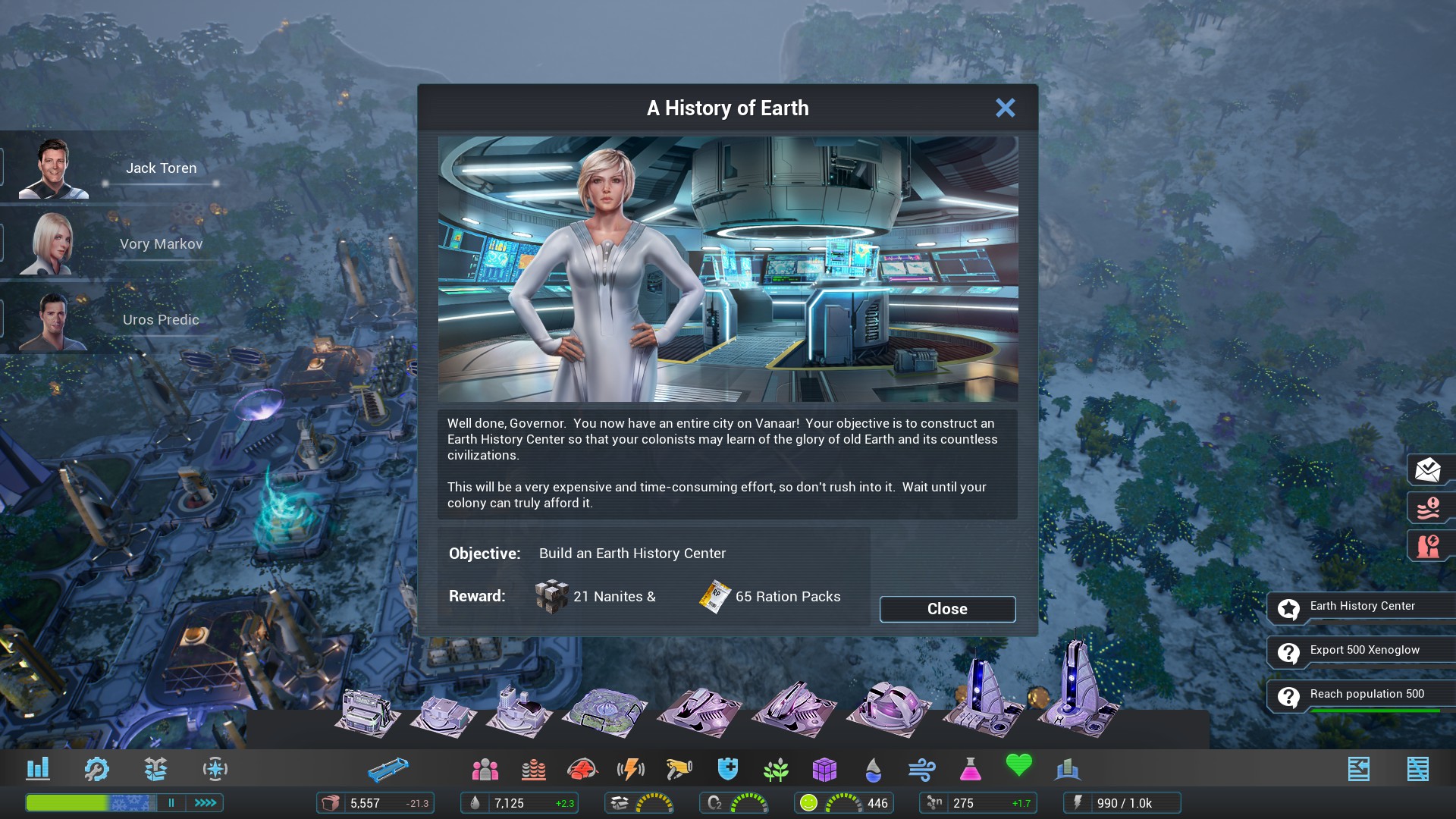 Each mission or sandbox effort starts the same way: You expand each colony with habitats, power, and food. The game gives you objectives to make sure this happens in the same way every time, and after a while I found myself wanting to just plonk down these more advanced structures straight away and found that, aside from upsetting my mission objectives, there's absolutely nothing stopping me from doing that.

Aven Colony does have a research system, but it's primarily centred around creating alien foodstuffs and medicines in your factories and chemical refineries. Despite the science-fiction setting, it seems humanity already has access to most of the buildings it'll ever need.

I soon learnt that that's because prosperity and the success of mankind's hopes and dreams in the stars isn't the driving force behind Aven Colony. Unlike Anno and Tropico, which the game borrows so heavily from, setting up profitable manufacturing chains here pales in comparison to dealing with thousands of disasters, whether that's alien fungus spores blowing in on the wind to infect your colony, fires, or an emergency expedition that you have to undertake to save some off-map astronauts that have fallen foul of one of the many hazards on Aven Prime. 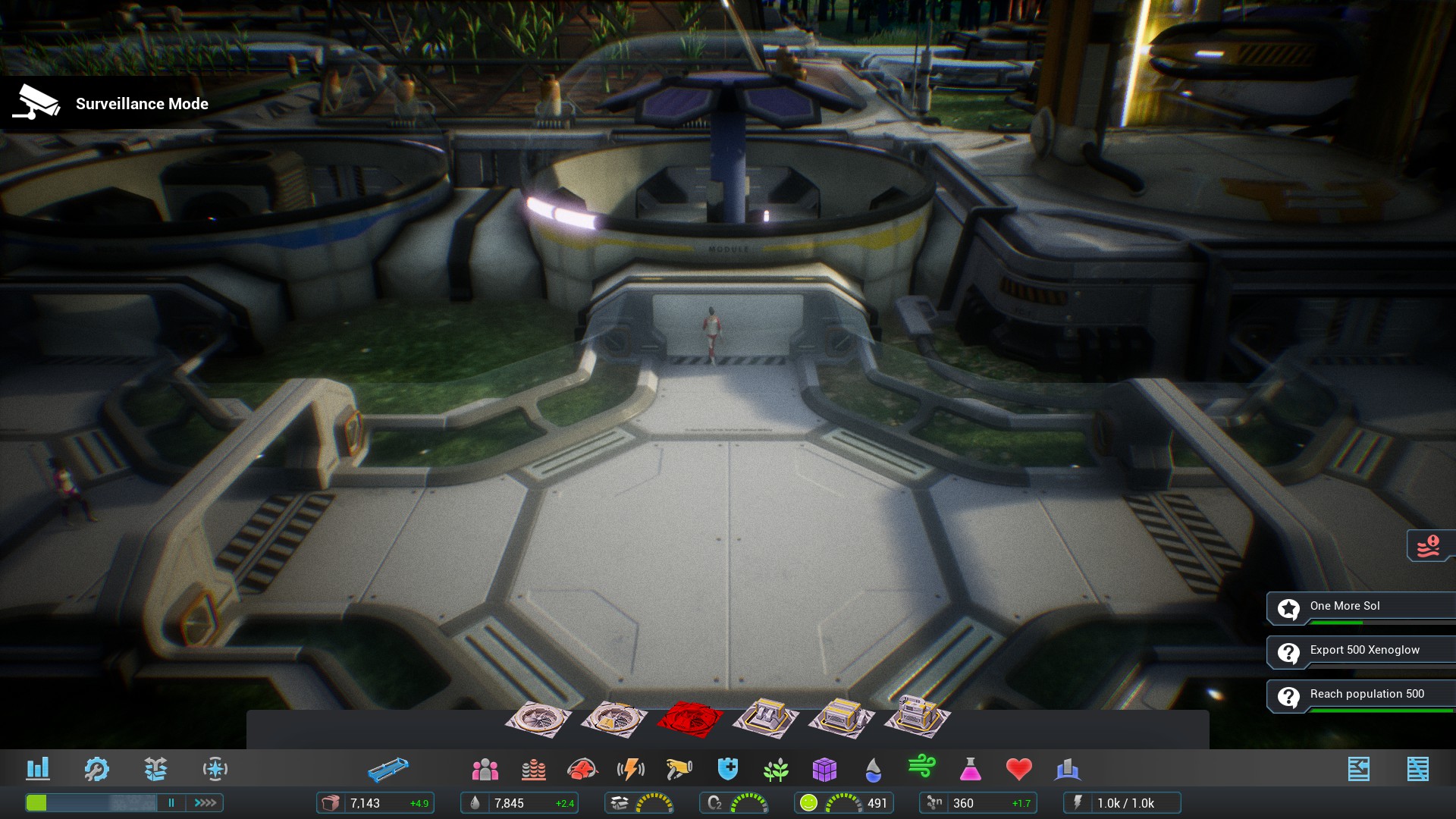 It is busywork. Busywork I came to quickly resent. I've chalked this up to a difference between what I want and what the game wants. I want to become the galaxy's primary exporter in alien bread, while the game wants me to have an uphill struggle for survival. Is this a flaw in the game? Probably not. But the fact the campaign didn't cater for my wants here was somewhat gutting.

Unfortunately, even when the disasters fade away and you can settle in to build out your colony, the weakness to the strategy layer becomes more apparent. This isn't a particularly deep game. That production line you've been creating? There isn't an economy in this game. No money, no taxes, and while you can trade off-world, it's only bartering. Here, you construct and produce most of your gear using nanites, which are produced from metal or alien sludge, and your workers work without cash; they're just another resource that you can use to produce things.

You use these nanites to upgrade everything too, and there's no research requirement or in fact a need to meet any requirements to upgrade the buildings. Upgraded buildings are better than the non-upgraded versions, so whenever you've got some nanites — which is always, if you've done the basic work of setting up a mine and a nanite-converting building — you just go ahead and upgrade whatever building you click on first for a straight upgrade. 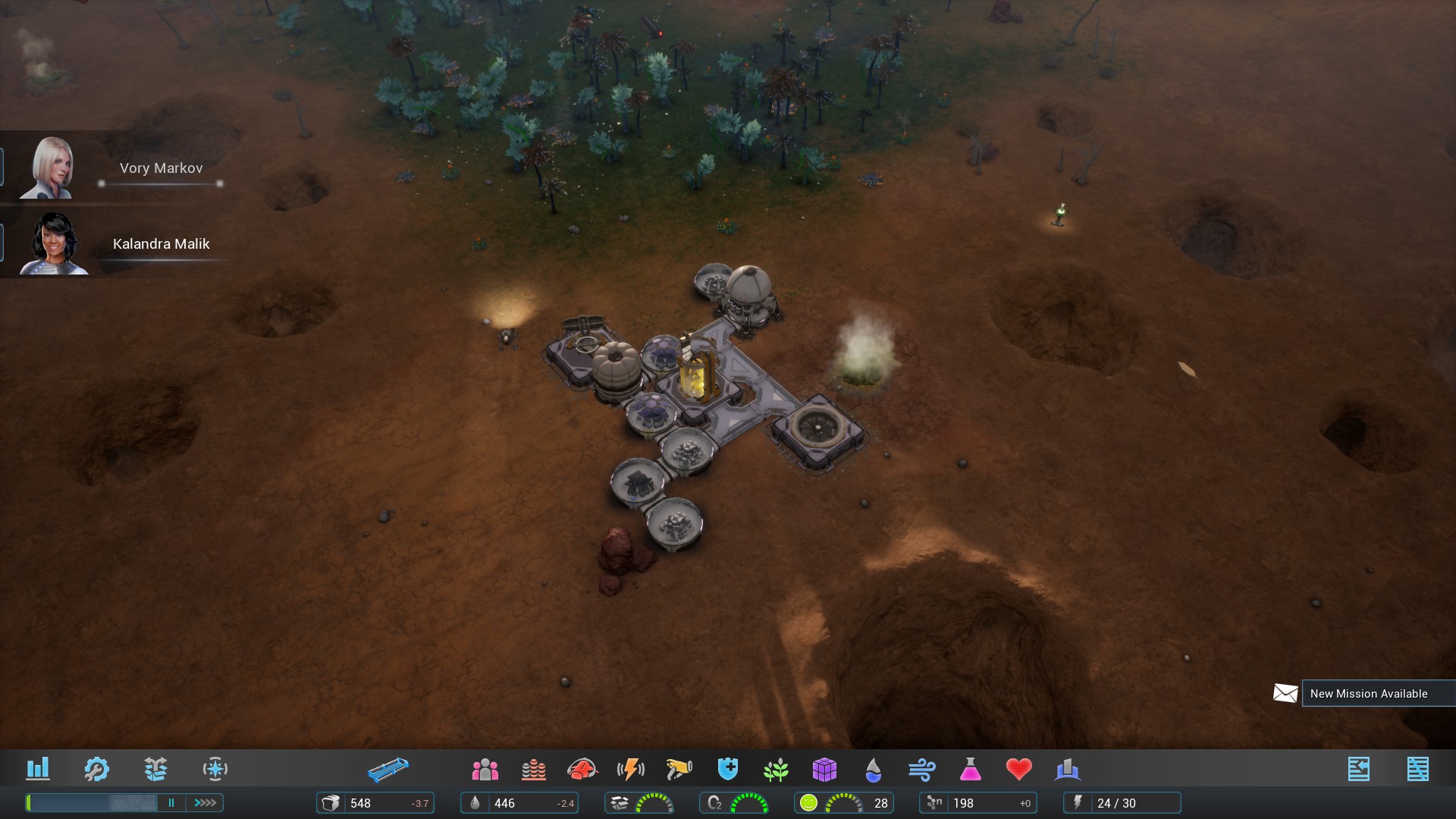 Added depth comes from the government section, requiring you to win re-election and rewarding you by allowing you to issue edicts to your citizens. However, this necessitates that you keep track of your approval rating. I found that this was easy to game, provided you build plenty of air filters to give people breathable air. You'll also need to accept that your citizens really hate walking longer than a few metres, and there's absolutely no way to get around that. If it gets to you, you can drug all of your citizens to keep them mellow, but I didn't really have too many issues keeping them together.

Equally irritating was the game's generic science-fiction. Aven Colony seems to be completely devoid of character. All of its interesting moments are pinched from something else. Your citizens amuse themselves in a VR centre, the alien lifeforms on the planet are giant Dune-esque sandworms and they show up too often, something that robs their emergence from a borehole towering over your colony of any terror. 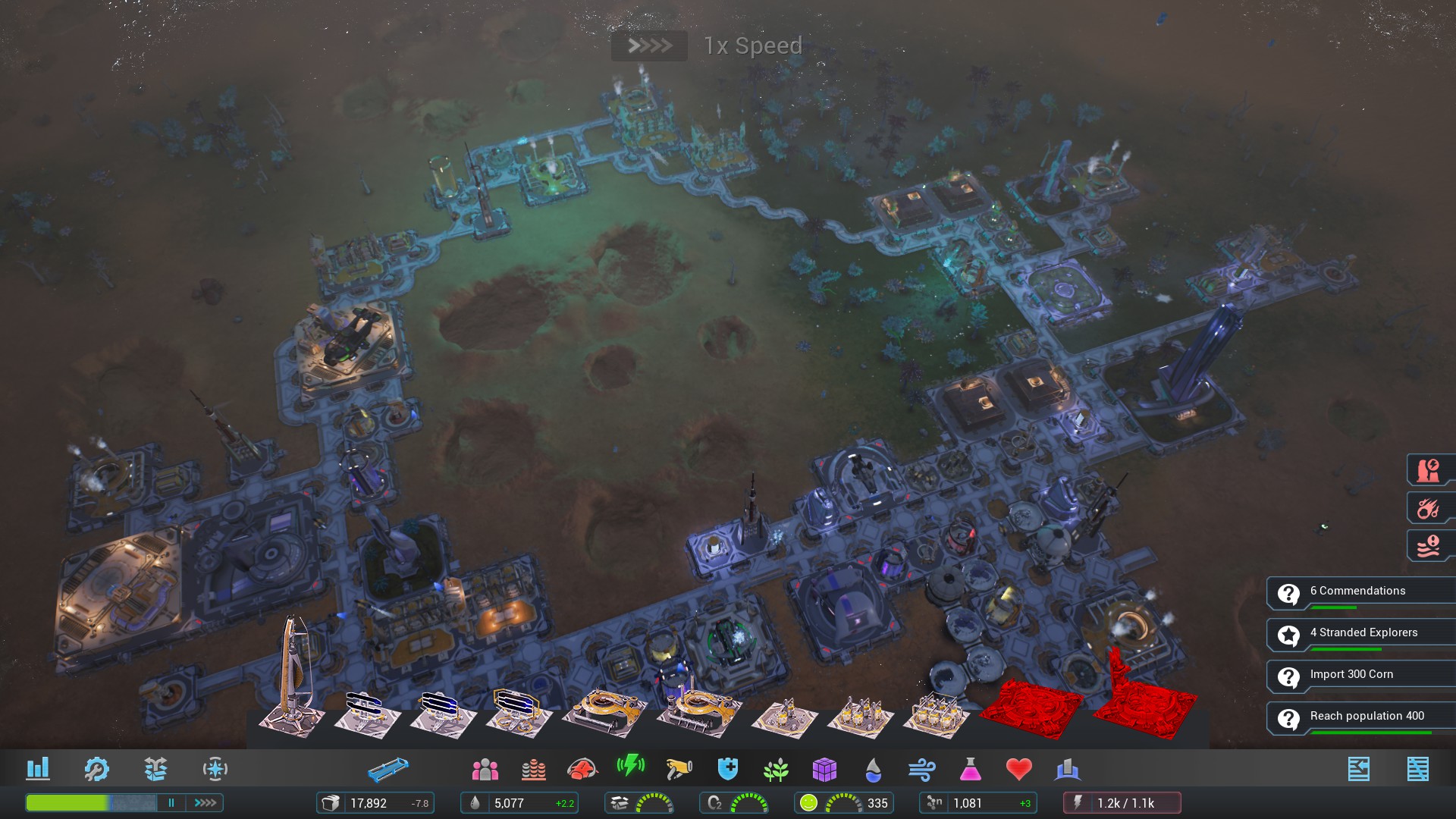 Aven Colony isn't awful, despite my largely negative thoughts so far. Its real crime is mediocrity. The simulation works on one level, but the game in general isn't put together well enough to recommend it over the games from which it takes inspiration: Tropico and Anno.

Great science-fiction needs a hook in the same way that a good strategy game needs something to hook you in. The Anno franchise allows you to build an international trading empire, while Tropico allows you to try to balance the political needs of not only your citizens but also those of the global superpowers. 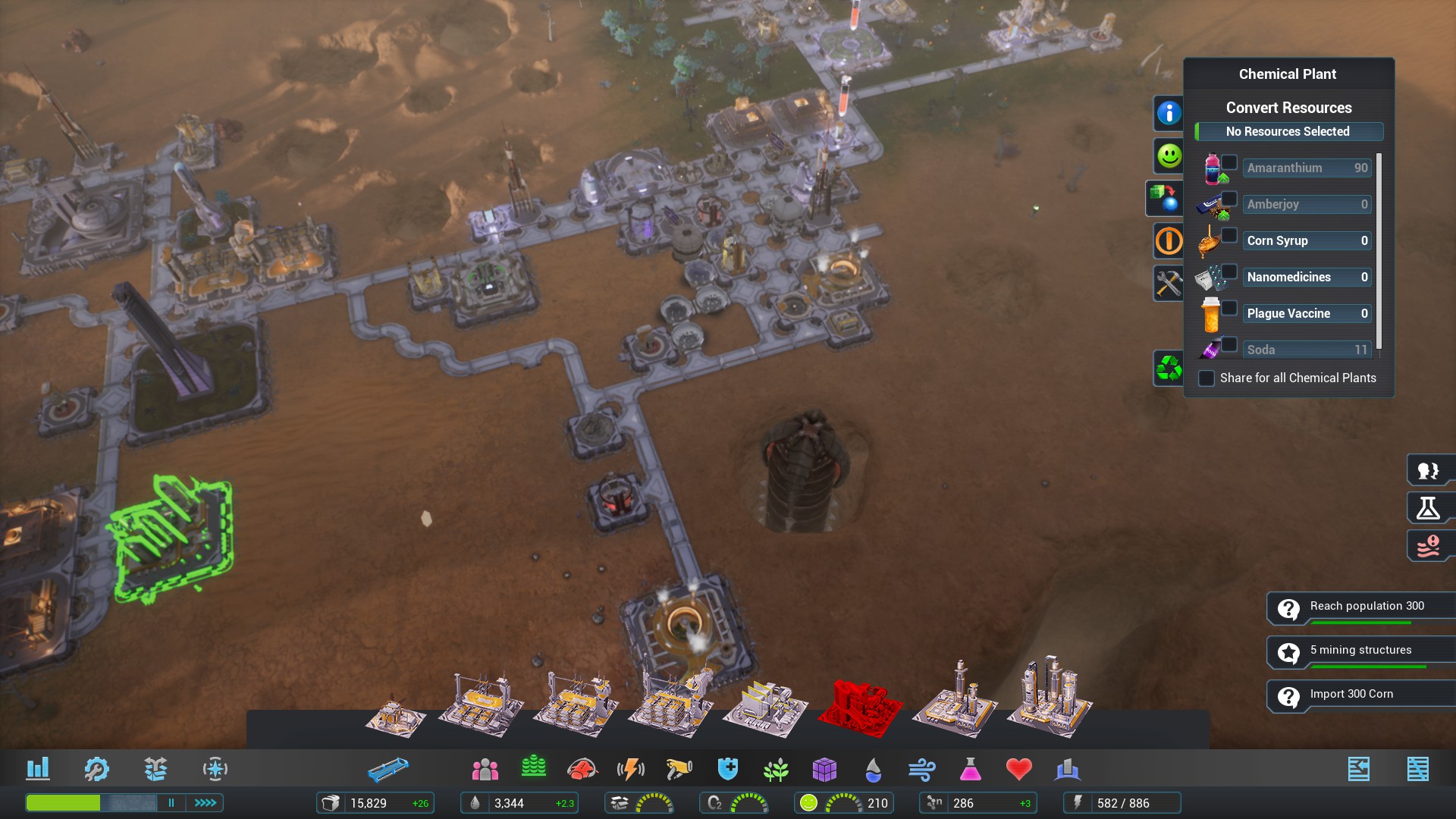 Instead, Aven Colony is competent but never fulfils its premise or potential. Some people might get a kick out of the game, but for many this will be a disappointment.