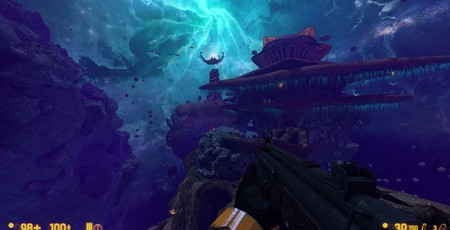 At what point does a mod become a game in its own right? Eight years ago, Crowbar Collective launched the Black Mesa bit of Black Mesa, taking players from Gordon Freeman’s iconic tram-ride to work right through to his departure via the Lambda Core portal to the border world of Xen. It was brilliant, better than anyone could hope for from a band of voluntary modders coming together from all over the globe. So good, in fact, that in 2015 Valve gave the team permission to release Black Mesa on Steam as a paid-for Early Access game. Is Black Mesa still a mod at that point? I’m not sure. But I’ll tell you this, if Black Mesa wasn’t its own game before, it sure as hell is now.

Black Mesa: Xen is amazing. Crowbar Collective have transformed Half-Life’s infamously weak and scrappy ending into one of the highlights of the entire game. This is a professional-grade redesign that radically rethinks Half-Life’s final few chapters, while still managing to maintain the spirit of Valve’s vision. At times it is arguably too ambitious, and ironically, could have done with a bit of a Valve-style editing. But even at its weakest moments, Xen is a remarkable upgrade compared to the original.

Before we dive into the luminescent healing pool that is Crowbar Collective’s Xen, it’s worth noting that Black Mesa is still officially an Early Access game. This is because Crowbar Collective is still working on its redux of the Half-Life multiplayer, alongside clearing up some lingering bugs and generally giving the game a final spit and polish. But the Xen portion of the game is basically done and dusted, and since Crowbar Collective are charging for it anyway, I reckon its fair game to review. Oh, and although I'm reviewing Xen separately, it's baked in as part of the core Black Mesa experience. In other words, all of Half-Life is now playable in this remastered form.

Black Mesa: Xen follows the structure of the original’s four Xen-based chapters, namely Xen, Gonarch’s Lair, Interloper, and Nihilanth. As with the original mod, it maintains the integrity of the original story. But every chapter (with the arguably exception of Nihilanth), has been expanded and improved just about every conceivable way. To star with, Xen is no longer a bunch of drab brown floating islands. It’s a lush and vibrant alien world, replete with stunning vistas and several distinctive biomes. Like the 2012 remake of Dear Esther, Xen works wonders with the Source engine, using lots of high-contrast colours, vivid lighting, and extensive vegetation to keep the engine’s age at bay. Obviously, it doesn’t have the intensity of detail as a modern game, but it is nonetheless incredibly pretty.

And the scale of it. Bear in mind, Half-Life’s Xen chapter is only a few minutes long. Crowbar Collective expand this into a good couple of hours of giddy exploration. Your initial objective, visible from the start, is positioned way off in the distance, with you gradually clambering and fighting your way toward it, much as you do the Citadel in Half Life’s closing chapters. Xen isn’t purely linear either. There are loads of little side-paths to explore, and several points where the level opens up into a large puzzle that lets you explore multiple alien avenues in whatever order you choose.

In terms of play, Crowbar Collective adopt a very Valve approach to compartmentalising each moment you spend in the game, figuring out how to give each chapter its own themes and variations. For that initial chapter, the focus is mainly on traversal and environmental puzzling. Within that are several different stages, including a wonderful sequence where you navigate an extensive mobile laboratory set-up by Black Mesa’s exploration team. Here, Black Mesa nods back toward those early, horror-focussed chapters at the start of the game, complete with a whole new type of headcrab zombie that Half-Life fans will no doubt love.

Perhaps Crowbar Collective’s greatest success is how they lend Xen a coherent sense of place. The way environments are paired with enemies lends a logic to its ecosystem that wasn’t so clear before. I love how houndeyes use the giant vine-like structure to navigate the world, and the humid swamplands that play home to bullsquids and those terrifying fish-monsters that still give me the jitters. Black Mesa adds narrative context to Xen’s environments, just as the original Half-Life did for general FPS level design. While that opening chapter is delightful, the highlight of Xen comes in Gonarch’s lair. Crowbar Collective has transformed this relatively simple boss encounter into a thrilling game of extra-terrestrial cat-and-mouse, vaguely reminiscent of being hunted through Nova Prospekt by the giant antlion. I don’t want to go into too much detail for risk of spoiling it, but it’s probably the single most ambitious level ever designed in Source, and a superb contrast to the comparatively chilled-out exploration of Xen.

Then we get to Interloper, which is where Black Mesa falters. It starts off strongly, with another brilliant action sequence. It also brings out the worldbuilding of this chapter in a way that more clearly bridges the gap between Half-Life 1 and 2, fleshing out the vaguely industrial setting into a fully-fledged processing plant operated by Vortigaunt slaves. Unfortunately, the chapter goes on for far too long, with too many variations upon the same puzzles and not enough visual variety compared to the previous chapters.

Luckily, Black Mesa still ends on a high, with a scintillating reproduction of the battle against Nihilanth. This is probably the chapter that’s been altered the least. If anything, it’s a slightly more straightforward affair than that of the original, cutting out some of the weaker parts of the encounter. But it’s also considerably more spectacular, with you rushing for cover as the big bad baby teleports entire chunks of the Black Mesa facility in purely for the purpose of throwing at you.

Honestly, I didn’t think Black Mesa needed Xen. I thought the work Crowbar Collective had done reimagining the terrestrial parts of the game was more than sufficient for any Half-Life fan. That it’s now one of my favourite parts of any Half-Life game should demonstrate just how well they’ve approached the redesign. Hey Valve, if you don’t fancy making Half Life 3, maybe you should give it to these guys.