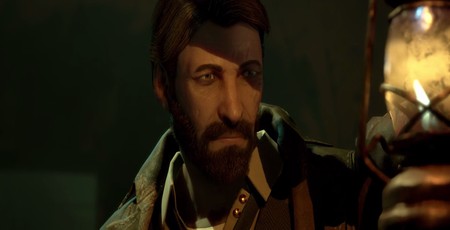 I suspected I wouldn’t get on with Call of Cthulhu from the moment I realised the main character looks like the beloved (and sadly departed) British actor Roger Lloyd-Pack. It’s difficult to take a tale of cosmic horror seriously when the grizzled noir detective you’re playing as reminds you of Trigger from Only Fools and Horses. What power can the Great Old Ones hold over a man who can drive a person mad with a simple broom? I’m aware that this is an entirely unfair reason to criticise Call of Cthulhu, although I have plenty of more valid criticisms that I’ll get to in due course. But it nonetheless encapsulates my sentiment towards the game. Like Trigger from Only Fools and Horses, Call of Cthulhu is neither very scary nor particularly clever. At its very best, the game is weirdly endearing, and at its worst it is stupid and dull.

Call of Cthulhu: The Official Video Game is not a direct adaptation of HP Lovecraft’s original tale (which I have read). Rather, it’s based on the pen-and-paper RPG of the same name (which I have not played). The game itself, however, is not an RPG, or at least not much of one. Instead it’s primarily a first-person adventure game, with some light stealth and RPG systems mixed in. After a short introductory sequence involving a secret cult ritual and a whole lot of dead fish, we awaken to find ourselves embodied in Edward Pierce, a stereotypical private investigator who is down on his luck and up on his blood-alcohol level. Struggling to find work because he is basically a snob, Pierce is approached by the father of a famous artist who was tragically killed in a house fire on an island subtly named Darkwater. The father believes the fire was no accident, and that his daughter’s last painting is prophetic of her fate. Intrigued, Pierce takes the case, and promptly sets off to Darkwater to investigate.

Call of Cthulhu’s take on Lovecraftian horror is distinctly pulp. Environments tend to be swathed in a sickly green fog, while its adventure amounts to a sightseeing tour of popular American horror settings, from creaking Charles Addams mansions to infirmaries run by crazy doctors. Although not especially original, the environment design is the strongest part of the game. Each locale is sufficiently decorated with period detail to make you want to poke around its nooks and crannies. Unfortunately, while the environments are well-drawn, the character design is terrible. Call of Cthulhu contains some of the ugliest character models I’ve witnessed in any mainstream game in the last few years. Special mention goes to Officer Bradley, your Darkwater PD sidekick who looks like the offspring of Gordon Ramsey and a dropped plate. The animation is also extremely ropey. Characters walk like they’re clenching a broom handle between their buttocks, and the way their mouths move is very off-putting. When detective Pierce is talking, he shows off more gum than the Predator.

The weakest aspect of Call of Cthulhu, however, is the writing and voice acting. Both are flatter than a whale’s airbed. The game is stuffed with witless and ponderous dialogue delivered in a hypnotic monotone by most of the cast. Some of the lines are cringe-inducingly stupid. At one point in the story, Pierce is accused of a crime by the local police, who state they have witnesses to his alleged dirty deed. In what I assume to be an attempt at a witty rejoinder, Pierce replies “Witnesses! How convenient!”. Given how much of Call of Cthulhu revolves around talking directly to other characters, the visual ugliness and narrative clumsiness severely undermine the game’s ambitions. It’s a shame because Call of Cthulhu does try to be an interesting detective game. Pierce is able to specialise in different areas of expertise, such as “Investigation”, “Psychology”, “Medicine” and “Occultism”. All of these open-up new dialogue choices that enable you to tease out information from characters in different ways.

Meanwhile, key narrative choices, alongside general information you collect in the world, also allow you to approach conversations differently. In one example, you and Bradley head to investigate the Hawkins mansion, but it’s up to you if Bradley accompanies you. Later, you’re confronted by the mansion’s protective Groundskeeper. If Bradley is with you, you can quickly defer to him to defuse the situation. If he isn’t, then you may have to deal with the old man through more forceful means. The other side of Cthulhu’s investigations is environment based. As you poke around, you’ll encounter “reconstructions scenes”, wherein Pierce pieces together what happened in areas of interest. Unfortunately, this is somewhat less successful, mostly involving walking around the area pressing “E” on different objects. After the brilliant deductive puzzle of Return of the Obra Dinn, Call of Cthulhu’s approach to detection feels decidedly undercooked.

There is one other interesting element to Call of Cthulhu, which is that as you’ll explore, you’ll encounter certain items and events that will impact Pierce’s mental stability. If he loses a little sanity, new dialogue choices will unlock that essentially enable him to chat with other characters in occult gibberish. If you lose a lot of sanity, it affects the tale more dramatically. It’s an intriguing idea, although the whole notion of insanity as a mechanic is rather played out. Unfortunately, these nuggets of potential do little to alleviate the bigger problems Call of Cthulhu suffers from, and there are issues that go beyond what I’ve already mentioned. Primarily, it’s not very scary. There are a couple of good jump-scares, and one of the creature designs is sufficiently creepy, but the game never really gets to grips with the concepts behind Lovecraft’s work. Lovecraft’s cosmic horror is meant to be about creatures and forces that would drive a person mad just to gaze upon them. But Cthulhu today is as recognisable as Dracula or the Xenomorph, an icon emblazoned upon t-shirts and lunchboxes. There’s even a Funko-Pop figurine of him.

It’s possible to make these creatures terrifying again, as Alien: Isolation so brilliantly demonstrated. But it requires a level of work that Call of Cthulhu either isn’t able or willing to commit to. Rather than attempt to rekindle the spirit of Lovecraft, Cyanide is happy to sit back and rely on creaky Lovecraftian tropes. Or rather, the tropes that have been built around Lovecraft’s original work. I don’t know who thought making one of your enemies an angry half-squid man was a good idea. But I can confidently say that it was not. Another major flaw is a general lack of consistency in mechanical design. There’s a stealth system that is so simplistic it might has well not have been included, and a light-based mechanic that the game doesn’t properly introduce until a good six or seven hours into the game. In one scene, Pierce must escape from a hospital, and the game offers several different ways for the player to approach this. At this point it feels like the game is starting to evolve, but afterward it goes back to being resolutely linear.

Ultimately, it feels like Cyanide didn’t really know how to translate its concept into code, and the result is a game with a few decent ideas scrappily and haphazardly executed. At the same time, the whole effort is torpedoed by the appalling script, the flat voice acting, and the lumpen character design. There are a few moments when the game threatens to be interesting, but for the most part, the only way Call of Cthulhu will drive you mad is through tedium.