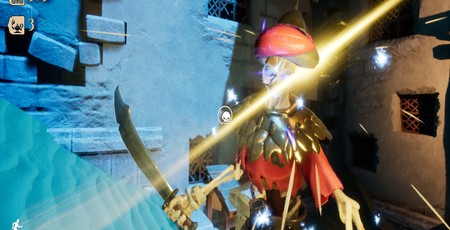 Oh, look! Another game that extensively features skulls! I can't wait to drag this gimmick out for another 1,200 words. SKULLS, SKULLS, SKU-

A whip cracks suddenly. A strangled cry sounds from the reviewer's throat as he is dragged abruptly off-page. A man wearing a khaki shirt and trousers appears in his place. His knee-length boots are covered in dust and scuffs. He carries a bullwhip in one hand, while a revolver hangs loosely from a belt at his side. He sports a monocle moustache you could lose a hamster in. Sorry about that, chaps! Your resident critic seems to have gone a bit funny in the old noggin-box. Lord Theodore Arbuthnot Ignatius Smythe at your service, professional pioneer and adventurer extraordinaire. You might have seen my exploits in reputable journals such as Colonialist Monthly and Outdated Stereotype Magazine. I've been to all four corners of the globe in search of treasures and artefacts to plunder from - I'm sorry, I mean safeguard on behalf of - other cultures. I was raiding tombs before Lara Croft triggered her first spike trap, and if I haven't shot it then quite frankly it isn't worth shooting. What what.

Anyway, while Mr Lane is off receiving his electro-shock therapy, which I believe is all the rage in modern infirmaries these days, your editor has asked me to compose a review of one of those newfangled electronic boardgames in his stead. The title in question is City of Brass, and it's about plundering treasure from a city inspired by 1001 Arabian Nights. Given this is approximately half the number of nights that I have personally spent exploring the Middle East, they thought I would be the ideal personality to deliver an assessment of this work of virtual derring-do. Personally, I believe it isn't a true adventure unless you leave behind at least one digit. But one has to move with the times to a certain extent. Picture, in your mind's eye, a city in the desert, glittering in the sun, abundant with riches, and as dead as that tiger that interrupted my elevenses in the Eastern Ghats last week. This magnificent metropolis is the victim of a curse that forces its dead citizens to walk its streets still, ready to leap upon any soul brave enough to venture over the city's white marble walls. And it isn't solely the city's inhabitants that suffer from such malevolent magicks; the streets themselves are infused with sorcery, shifting like the desert sands each time a new adventurer tries his luck.

You play one such adventurer, or many such adventurers, it is never made quite clear. Emerging straight from Arabian legend, armed with a scimitar and a bullwhip and the kind of stalwart attitude that got me through deepest Amazonia despite a crippling case of Malaria and and the attention of several man-eating Jaguar. After passing through the gates of the Forbidden Outskirts, you must navigate your way to the heart of the city, relieving it of its treasures and putting the city's undead guardians to the sword as you go. How precisely you go about this is up to you. Your compass always points to the exit, but there are many paths that cut through each of the city's thirteen concentric districts, each lined by side-streets and buildings that lure you astray with the promise of riches. There is but one hard and fast rule: Do not tarry! The sands of time are always against you, and should its temporal grains cease their tinkling fall, a fate worse than death awaits you – the loss of all your progress.

And it's a fate that you should be prepared to face. I have withstood the sternest of challenges in my years treading the Earth's face. I've survived blizzards and avalanches while crossing the Himalaya, and done battle with pirates in the Indian Ocean during a cyclone. I've even been to Stockport. And yet I have encountered little that compares to the infernal machine that whirs and clicks inside the city of brass. Chances are you won't make it beyond the first door without a nasty spike-trap making an introduction, slicing off a chunk of your life like a lovely side of kangaroo steak. Venture deeper into the city's bowels, and you'll discover streets littered with deadly pitfalls and spinning spike columns, roiling lava pits and inescapable, magical vortices that drag you into walls lined with nails. The arrangement of these deadly devices is never the same twice, but it is subtle and devious. What's more, there are other concerns that might easily distract an adventurer's attention. The streets are patrolled by all manner of unnatural abominations, from armless corpses that charge you like the bulls of Pamplona (a festival I have attended thrice, by the way), to genies that fling fireballs and dispatch malevolent spirits to harry your progress. Certain districts are guarded by sorcerers of especial power, who summon magical barriers to protect their bodies or concoct illusions that deceive the adventurer's eye.

In the City of Brass the noble adventurer is outmatched, outnumbered, and outgunned. But he is not helpless. A few swipes of your sword will dispatch even the most fearsome of adversaries, but it is the whip that is truly the explorer's saviour. Flick it across the skull of an enemy and he'll stagger back in stunned agony. Alternatively, you may score their hands to force them to drop their weapons, or lash their legs together so they stumble unto the sand. Your trusty cord can even be used to pull these foul creatures onto the very traps that have been laid for you. Your blade may be the might that lays your enemies to waste, but it is the whip that allows you to control their hordes, to stop and push and pull them into the order of their destruction. But hold! Your own weapons are not the only methods of dispatching the city's monsters. A wise adventurer uses whatever is to hand, from urns and bombs that may be thrown at an enemy, or jars filled with mystical energy that will explode with a crack of your whip. Even a well-timed slide-kick may propel you across a spike trap, or knock down an encroaching foe.

In preparation for this task I have studied the history of interactive adventures powered by Difference Engines, and one might compare City of Brass to the work of Arkane Studios, most notably the fantastical swordfighting game Dark Messiah. City of Brass encourages you to be a creative adventurer, to combine your tools and the opportunities surrounding you to find a novel solution to the city's constantly evolving obstacles. But the added time pressure means you must think quickly and react to each situation as it evolves. A crack of a whip here, a swing of the sword there. City of Brass imbues within you the spirit of the swashbuckler, to perform your own deadly dance through its streets like an Arabian Errol Flynn, who, incidentally, consulted upon myself several times in preparation for his roles. No matter how skilled a blade-master you are, however, at some point you will inevitably have to contend with death and loss, at which point you will be flung back to the Forbidden Outskirts to begin your journey all over again. There are ways to mitigate your losses, however. Each Sorcerer you defeat will open a portal that will propel you straight into the action at set points within the city. You can also purchase a wide variety of equipment from – and this might sound a little odd – merchant genies who reside within the city. These benevolent elementals will exchange your looted gold for a sharper sword, or a whip that ignites your enemies into flames. A few of these spiritual vendors even sell insurance, allowing you to carry your new equipment beyond the door of death.

Those unaccustomed to adventure should also not immediately shy away from City of Brass, as it allows you to reduce the challenge in the form of blessings. These may provide a boost of life, or a more damaging blade, or reduce the number of traps and opponents that you may face inside the city's walls. On the flip side, veteran pioneers may shoulder special “burdens” that make their adventure even more challenging, an approach of which I naturally approve most highly. After all, where is the joy in crossing a bridge if at least three of its slats will not break and threaten to propel you to your death? How is it enlivening to cross an ocean if there are no storms? In what way is it invigorating to walk through Glasgow city centre on a Saturday night if there are no inebriated men and women to accost your every step? Such is the embodiment of any noble expedition! But I digress. There is much to admire about City of Brass, from its creative use of a classic mythological setting, to the way it constantly exudes tension and excitement, the twin spirits of adventure! But there is one problem, namely that it suffers from a certain lack of finesse. Each action you commit to feels like it takes a second too long, from swinging your sword to cracking your whip to sliding along the ground. As a seasoned pioneer, I know the difference a split-second can make between life and death, success and failure. I know that the essence of adventure is defined in those moments, and sadly, City of Brass lacks that sharpness of feeling. This may seem like a small and insignificant issue to pick up on, but it is consistent across the board, and serves to dampen the intensity of your experience, like being chased by a group of marauders on horseback, only to discover that their steeds are all lame in the leg.

Nonetheless, speaking as someone who has swum with bears and wrestled sharks (and yes, that is the correct arrangement) I would heartily approve of a voyage to the City of Brass. It may suffer from a slight leadenness of foot, but that doesn't stop it from being a thoroughly ripping yarn. Now, if you will excuse me, a new adventure awaits, and I must book passage on the first stagecoach bound for Hull. I believe it will be a most perilous journey. Until our paths cross again!