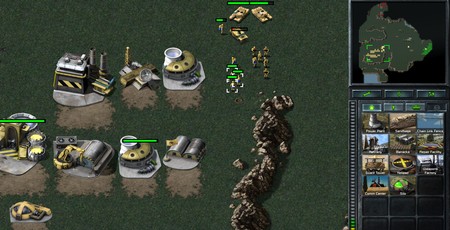 If you were the kind of madman that Kane himself might recruit and viewed the decline of real-time-strategy games over the last ten years as some kind of war, then Command and Conquer would have been the first casualty of that war. Beyond a couple of nondescript releases on mobile, the venerable strategy series hasn’t so much as trained a minigunner since the dismal reception of Command and Conquer 4 back in 2010. As tough-as-nails tactics games and hulking grand strategies have stormed across the battlefields of the last decade, the RTS has beaten a hasty retreat. Only a handful of hardened troops (mainly Starcraft II) have stayed behind to fight. A cynic might therefore view the Command and Conquer: Remastered Collection as EA testing the water to see if interest remains in what was once the Commander-in-chief of strategy gaming. Personally, I don’t think that’s the case, but even if it is, EA can be as cynical as it likes provided it continues to green-light remasters of this quality.

Things look bright for The Remastered Collection right from the new EVA “Installation”, which has been entirely re-made to make sense in 2020. Grainy logos are gradually upscaled from 320x200 as far as 3840x2160, while it also pretends to scan for sound cards before selecting “HD Audio”. It’s a wonderful bit of theatre, demonstrating Petroglyph’s commitment to making The Remastered Collection feel like an occasion and not merely an upgrade. The Remastered Collection’s flair for the theatrical doesn’t end there. Once you start a campaign, whether in OG C&C or the spin-off, Red Alert, the game commences with the original graphics on display. It’s an intentional reminder of just how much Command and Conquer has aged, that your memories of crisply-drawn soldiers collapsing in pools of blood and tank platoons rolling across the battlefield are about as accurate as an octopus playing darts.

You’ll play this horrid, grainy smear for about two minutes, whereupon the game will instruct you to press SPACE. At this point, the visuals smoothly transition to the lovely remastered art. Every unit, building rock and tree has been carefully redrawn, while tiny animation like the flag of your barracks fluttering in the breeze, or your gunners fiddling with their weapons, has been painstakingly recreated. It’s worth noting the intent here is purely to make both games look good on an HD screen, rather than to modernise their look. Both games still sport that odd, semi-isometric perspective, where buildings look sort-of 3D but the terrain doesn’t. There are no new visual effects. No lighting, no dynamic shadows, no shaders. Petroglyph’s aim is to preserve the art of the original, rather than painting over it like that Spanish woman who turned Jesus into a smooth hedgehog.

In other words, the game still looks old, but in a good way. That’s only the beginning of the Remaster’s efforts, however. Alongside the visual overhaul, the audio has been completely updated. The entire soundtrack has been re-recorded for HD audio, while a new Jukebox feature has been added that lets you create customised C&C playlists. Given that Command and Conquer’s music is some of the best in strategy gaming, this is a fantastic addition. Beyond that, multiplayer functionality has been thoroughly updated. Both matchmaking and custom servers have been added, while a new map editor has been created to let you build your own multiplayer and skirmish scenarios. Finally, Petroglyph has made some minor tweaks to the game itself. Build queues have been added, while a new zoom function lets you get a broader overview of the map.

The only notable issue with the remaster is the quality of the pre- and post-mission cutscenes. C&C’s FMVs are famous for their cheesy brilliance, but sadly the original recordings were lost around the time EALA shuttered. In the absence of the original source material, Petroglyph has attempted to up-res the FMVs using AI algorithms, but the results are mixed. Command and Conquer’s updated FMVs look decent, although nowhere near as sharp as they would if taken from the original recordings. Red Alert’s FMVs, on the other hand, still look extremely grainy. Despite this The Remastered Collection is a comprehensive and intelligently thought-out remaster. This should come as no surprise, given that Petroglyph was partly formed from the ashes of Westwood/EALA, and as such the studio has Command and Conquer in its blood. But what about the game underneath? Is it actually worth buying the Remastered Collection to play, or is Command and Conquer better off in a museum?

The short answer is, abso-fluppin’-lutely. It’s surprising just how well Command and Conquer holds up. Admittedly, the general mechanics are simplistic by today's standards, and some of the game’s older conventions like the inability to attack-move and having to destroy every last enemy building do frustrate a little. On the other hand, what a rush this game is. The campaigns are beautifully-structured creations, with each mission providing a unique, carefully-crafted challenge that makes superb use of the game's relatively small number of buildings and units. Often it throws you straight into the action, forcing you to construct your base while defending against enemy attack. Command and Conquer is great, but Red Alert is even better. The introduction of explosive oil barrels into many missions make for some delightfully spectacular battles, while the Soviet Union campaign is wonderfully off the charts, letting you control attack dogs and submarines, and build wacky defensive structures like flame towers and Tesla Coils.

I hope this is just the beginning for Command and Conquer’s newly-remastered life. At the very least, I’d love to see Tiberian Sun and Red Alert 2 get the same treatment. If that doesn’t happen, however, then the Remastered Collection is still well worth the effort. These classic games have now been safeguarded against the ravages of time, and are better able to demonstrate what a tour-de-force they were – and still are – in the world of strategy gaming.