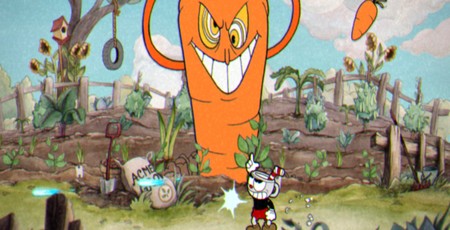 It's fitting that Cuphead is about making a deal with the devil, because StudioMDHR's game is just as sly, merciless, and cruel as the cloven-footed man downstairs. Cuphead lures the player in with its delightful animation, promising a luxurious bath of childhood nostalgia, surrounded by grinning anthropomorphic vegetables and cheerful boxing frogs. The moment you close your eyes, however, Cuphead bashes you over the head with a giant cartoon mallet until tiny little Cupheads dance in front of your eyes. It's as challenging as it is gorgeous (and boy, is it gorgeous). But what about the game that lies beneath? Well, if we think of Cuphead as a playable animation, then the emphasis is undoubtedly on animation first, playable second. Cuphead demands a lot of the player, but it doesn't give back much in return. Like a fairground automaton, you can touch, prod, and even hit Cuphead as much as you like, but whatever you do to it, it's never going to say anything other than its recorded lines.

Cuphead inverts the typical structure of platform games. Normally, you'd expect lengthy sections of side-scrolling platforming punctuated by the occasional boss battle. In Cuphead, boss battles are the main attraction. Each of its three islands is home to five or six unique bosses whose souls you must collect in order to fulfil Cuphead's ill-thought-out bargain with Lucifer. There's the occasional “run-and-gun” level which is more like a traditional jumping game, but these act mainly as  a palette cleanser, a quick(ish) distraction on the road to another titanic encounter. At a conceptual level, this works superbly with Cuphead's theme and aesthetic. Each of these battles is framed like an early twentieth century cartoon short, complete with a black-and-white title-card before the main event. The battle unfolds like an escalating animation plot, with the boss proceeding through increasingly extravagant forms. To give one example, a blue-and-red circus clown charges you with a bumper car, then transforms into a balloon-man controlling snapping balloon dogs, then rides a hobby-horse that fires glowing horseshoes from its mouth, before finally transforming into a gigantic carousel spitting out balloon penguins.

The creativity on show is astonishing, as is the meticulous nature of the developer's animation. The surreal metamorphoses each character goes through are oozing with period detail, as are the scratchy jazz soundtracks composed specifically for the game. Indeed, perhaps my favourite thing in the game is the barbershop song that plays over the menu screen, which both sets the tone perfectly and gives you a rundown of the plot. What is most striking, however, is the sinister edge lent to each of the animations, the ways in which character's smiles are balanced between cheerful and malevolent, the way smaller characters are distinguished by their haunting black eyes, the disturbingly direct manner in which the cartoons deal with death, such as how one boss turns into a tombstone in his final form, attempting to slam down on Cuphead and squash him flat. Each stage of Cuphead is simultaneously a carnivalesque dreamscape and a grotesque nightmare. It's a strange, almost hypnotic experience.

Perhaps a state of hypnosis is  the best way to play Cuphead, as your concentration needs to be absolute to beat some of its later stages. Cuphead makes no bones about its difficulty. Each boss has around four phases that it goes through, and as standard Cuphead only has three health points before he dies and the level restarts, mastering these fights is always a battle of attrition, learning the movements of each phase and figuring out precisely how to avoid them. For the most part, I think the challenge is well distributed. Though tough, each fight usually lasts no more than three minutes, so losing an individual bout isn't as painful as it could be. What's more, there are various ways to provide yourself with an edge, including perks that bolster your health or provide Cuphead with a second of invulnerability when he dodges. You can also opt for 'Simple' difficulty, which alters and even strips out certain phases of the fights to make them easier. But you can only fight the final boss once you've completed all the other bosses on regular difficulty, so Simple-minded players will have to step up if they want to complete the game.

That said, there are some fights that are orders of magnitude more difficult than others. 'Sugarland Shimmy' is already well on its way to infamy, but I found the aforementioned clown battle to be controller-smashing stuff. Often, it's small elements deliberately designed to disrupt your flow that are the most frustrating, such as a tiny jellybean who walks almost unnoticed across the bottom of the screen. At these points, it feels less like the designers are challenging you, and more like they're deliberately trying to annoy you. But one man's granite is another man's granola, and although I found some of the game's bosses too unpleasant to enjoy, I can also see the appeal of wanting to beat those bosses. The problems I have to do with Cuphead are less about the act of defeating those bosses and more to do with the act of fighting them.

To battle his opponents, Cuphead has a bunch of abilities at his disposal. His basic attack is a pea-shooter that fires a stream of bullets at enemies and whittles away their health. In addition, by charging up 'cards' Cuphead can enact a variety of super attacks, from turning himself into a bomb to spraying enemies with soda from his straw. Yet while all of these attacks are superbly animated, none of them are particularly satisfying, because the bosses offer little to no feedback when taking damage. All that happens is they move to the next form faster, before ultimately collapsing at the end. Consequently, Cuphead's boss battles feel less like an actual fight and more like you're threading yourself through the cogs and gears of a giant, indifferent machine. There are no on-screen cues to inform you how far into a battle you are, and endlessly holding down a button to gradually erode an invisible health bar is not particularly enjoyable. I don't feel like I've won at the end of a Cuphead battle, merely that I have survived. There's a critical lack of dynamism to Cuphead's play; all you ever do is respond to its cues, while it hardly ever responds to yours.

Ultimately, Cuphead's systems end up as slaves to the art. Those stunning and meticulous hand-drawn animations don't possess the flexibility of more procedural or 3D art, and that means its encounters, while visually dynamic, are systemically very static, and that impacts upon the feeling of progress and play. Cuphead may be like nothing you've ever seen, but as something you play there are better and more enjoyable challenges out there.