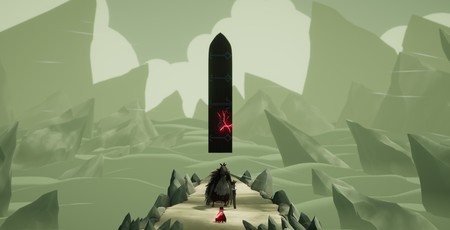 If I had to pick one word to summarise Death’s Door, the word I would choose is “clean”. It’s one of the cleanest games I’ve played in a long time. Everything about it, the environment design, the writing, the combat system, has been scrubbed and clipped and polished to the point where it looks and feels magnificent. It isn’t the most original game around, clutching tightly to the hem of Zelda’s skirt. But the game is so well put together that, for the most part, it simply doesn’t matter. 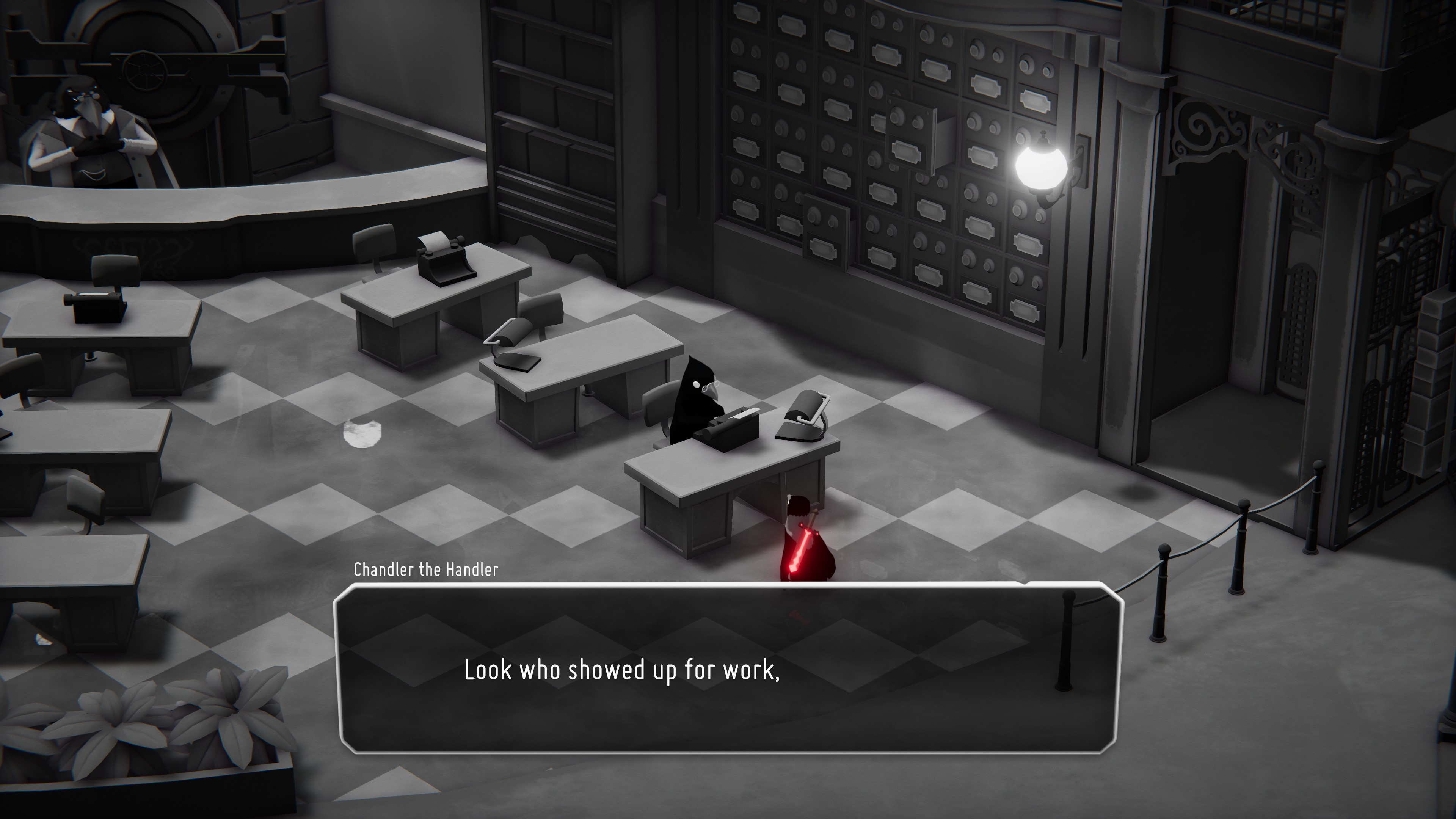 In a premise that bears not insignificant similarities to Grim Fandango, Death’s Door sees you play a fledgling grim reaper working for a supernatural administration that deals in the business of soul harvesting. When I say “fledgling” I mean that quite literally, because you play as a crow. Indeed, all the administration’s reapers appear to be of corvid descent, one of many neat artistic touches that Death’s Door presents us with.

Anyway, perceived by your employers as slacking on the job, you’re dispatched to harvest a particularly troublesome soul. As you’re about to claim it, however, a larger reaper takes the soul for himself. Tracking down the thief, you discover this rogue reaper has found the legendary death’s door, and wants to open it. To help them do this, they want you to track down three particularly large and juicy souls, scattered to the far corners of Death Door’s fantastical realm. 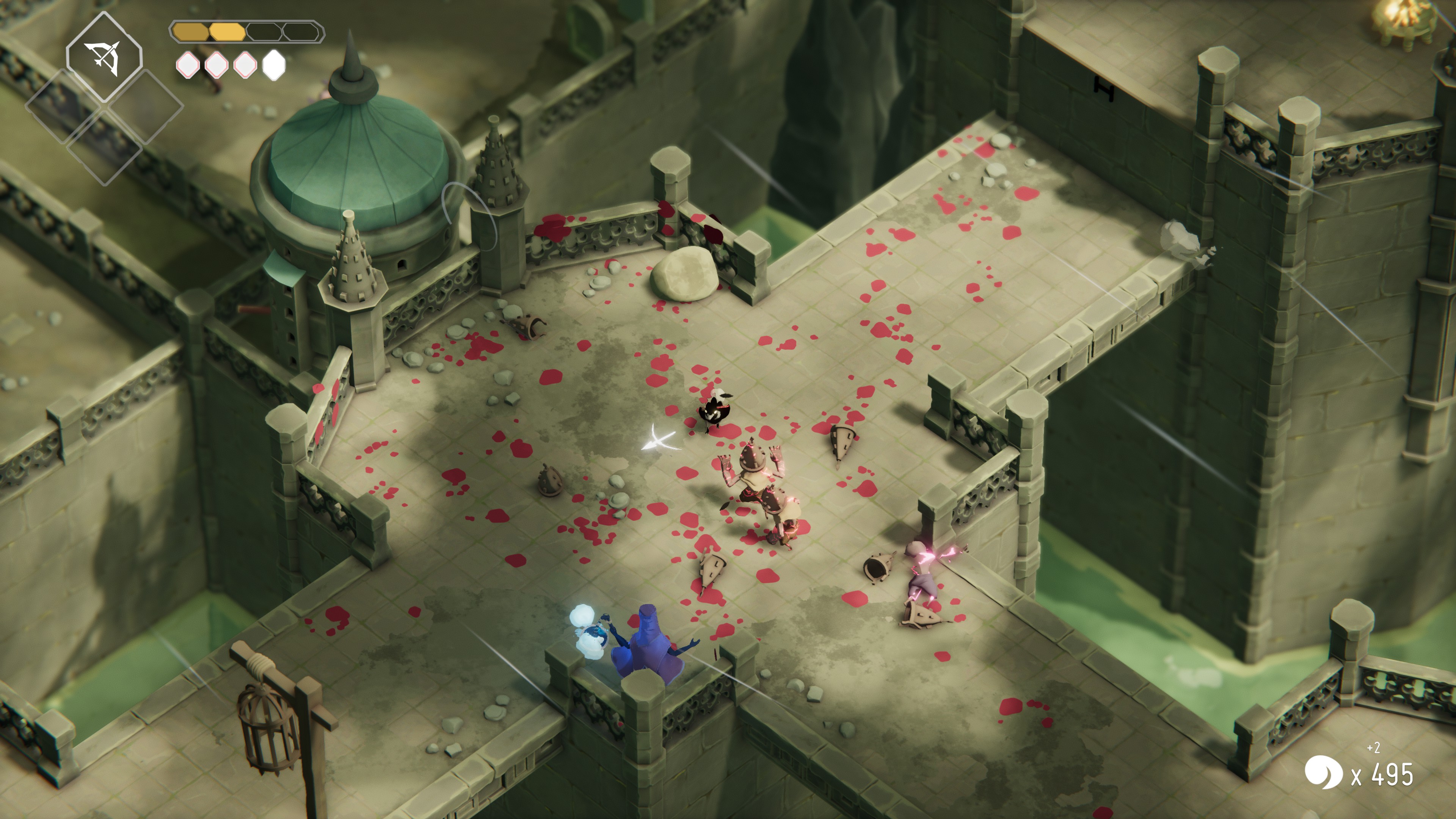 So begins a slick and sprightly action adventure, where you fight monsters and solve environmental puzzles in a world that gradually unfolds as you gain new items and abilities. There’s a comforting familiarity to Death’s Door that makes it easy to engage with. It’s an entirely unpretentious game, never trying to disguise its structure or dress things up as more than they are. Indeed, it does the opposite, making its various roadblocks and obstacles extremely clear and obvious. You know that you’re going to need a smashing ability to clear awa those cracked rocks. You know the metal anchors wedged into the ground are intended to be traversed with a grappling hook.

Death Door’s main twist on the Link’s Awakening formula is to sprinkle in some Dark Souls-ish combat into the proceedings. Your winged protagonist can only take a few hits before dying, so must rely on speedy, merciless attacks and a generous dodge-roll to survive. Moreover, as you explore, you’ll encounter a range of bosses who are as colourful as they are tough. Early on, for example, you’ll square off against an enormous cathedral façade that shoots lasers and missiles at you. 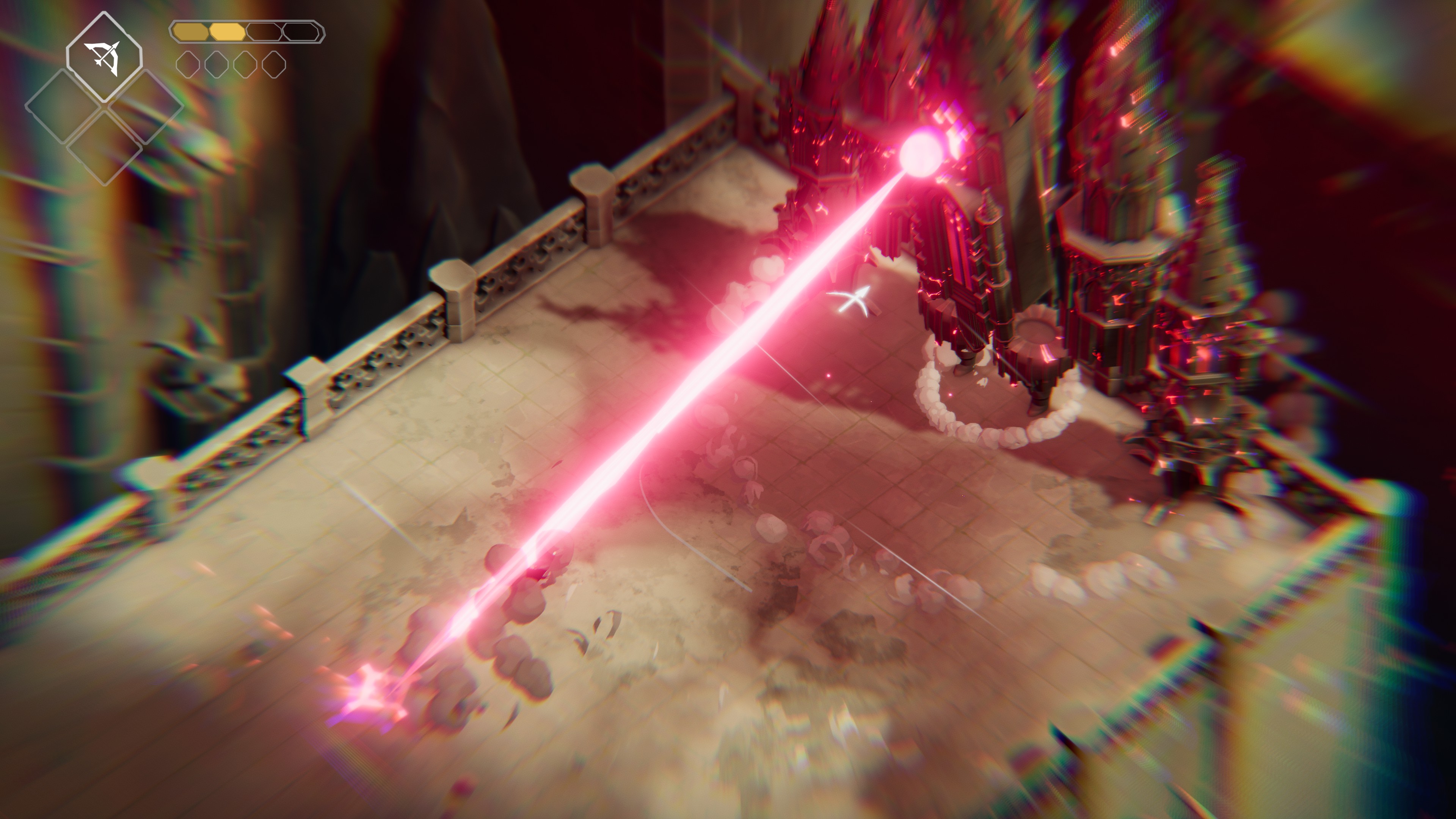 It’s important to stress that Death Door’s combat is only broadly inspired by Dark Souls, and doesn’t attempt to replicate the function of that game’s fighting. While there are certainly some challenging moments in Death’s Door, it nothing like as brutal or relentless as any of From Software’s Games. Indeed, one of Death Door’s most enjoyable features it how it balances challenge with progression. It generates that thrill you get from a difficult Souls battle, but without being anywhere near as obstructive. When you do get stuck on a natty encounter, your movement through the world is so swift that you’re back into the fight within seconds.

Another major difference is that Death’s Door is a more light-hearted affair than your average Soulslike. The world and dialogue are laced with wry humour. On your first quest to defeat the mysterious “Urn Witch”, you encounter a man called Pothead, who, in a fairly obvious play on Dark Souls’ Onion Knight, literally has a cooking pot for a head as a result of being cursed by the witch. But this tale has its own twist too, as the witch proves herself to be far from a typical scheming, evil sorceress. In fact, she wants everybody live forever, which is a nice sentiment, but somewhat antithetical to your role as a literal agent of death. 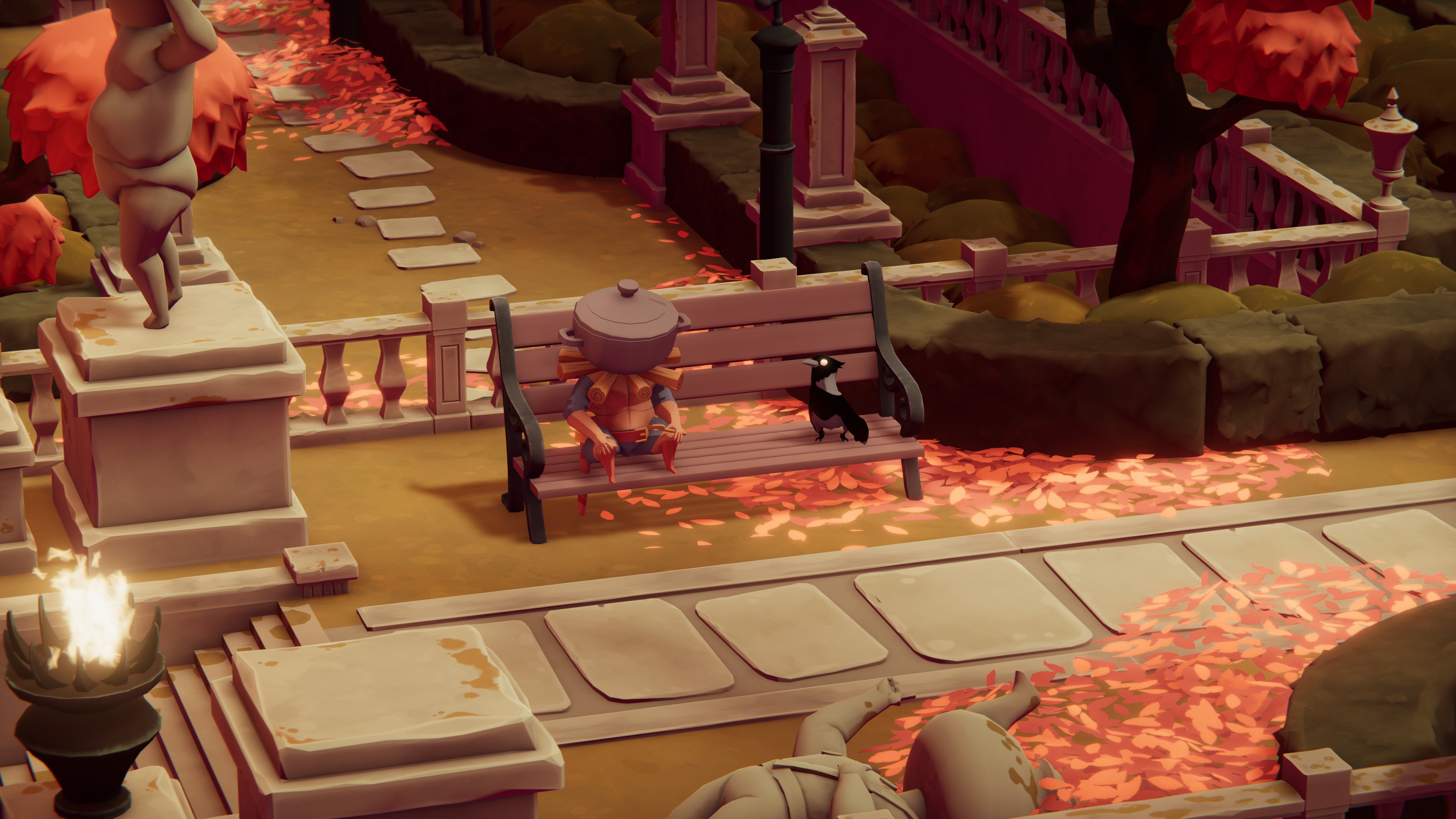 This playful tone, perfectly balanced between humour and lending the world sufficient gravitas to make your adventure feel meaningful, is one of many examples of Death Door’s precise design. I love the style of the world, which presents a dilapidated fantasy-scape without sacrificing charm, and is boldly sketched out with brush-stroke texturing. The more functional level design is excellent too. The way everything interconnects, with secrets and new pathways teasing you from the corners of the screen, hinting as you pass that you’ll be able to explore them soon. But not yet. Not yet.

There are a few minor issues. Death’s Door borrows Dark Souls’ gimmick of having set respawn points when you die. But it’s inconsistent about whether enemies respawn with you or not, which makes throwing the player back to an arbitrary point in the level somewhat superfluous. In addition, the upgrade system is downright boring, all geared toward making you a bit stronger, a bit faster in ways that are nigh imperceptible in general play. 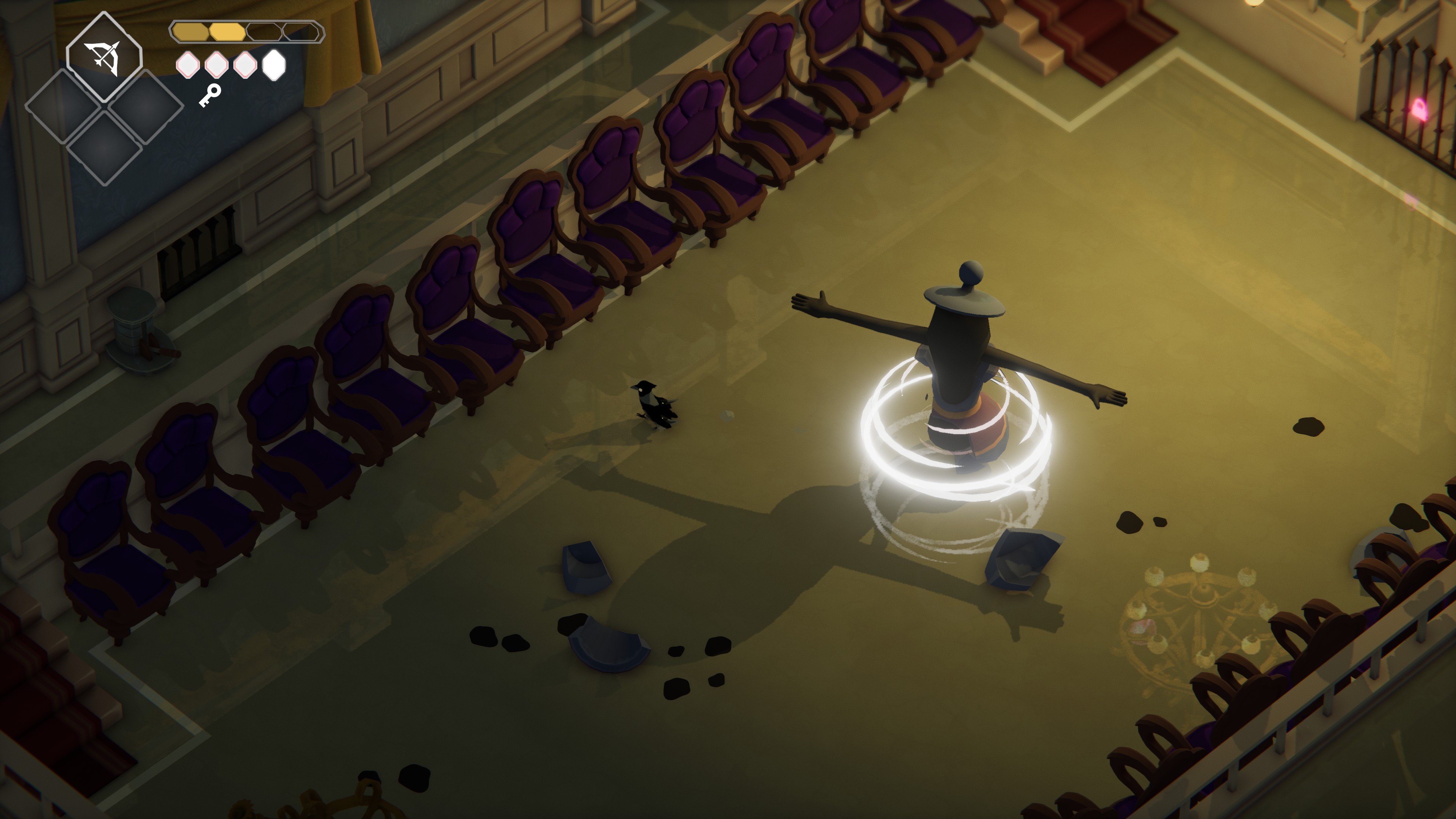 Beyond minor flaws, the only broader issue I can raise against Death’s Door is that it lacks a feature to call its own. The combat, the puzzling, the exploration is all beautifully put together, but there’s nothing in here that’s particularly new or inventive, nothing that made me sit up and go “Ooh, hold on a minute.” The puzzling, for example, would benefit from a central mechanic to bind it all together. Perhaps Acid Nerve could have brought the interdimensional doorways concept into the game more, rather than reserving them for checkpoints.

Yet while Death’s Door may be missing a spark of its own to be a true masterpiece, it is nonetheless an exceedingly elegant exercise in soul-stealing, one which also has the grace not to outstay its welcome, clocking in at around 10 hours. If you’re in the mood for an adventure that’s equal parts fun and challenging, then I thoroughly recommend you step across the threshold of Death’s Door. 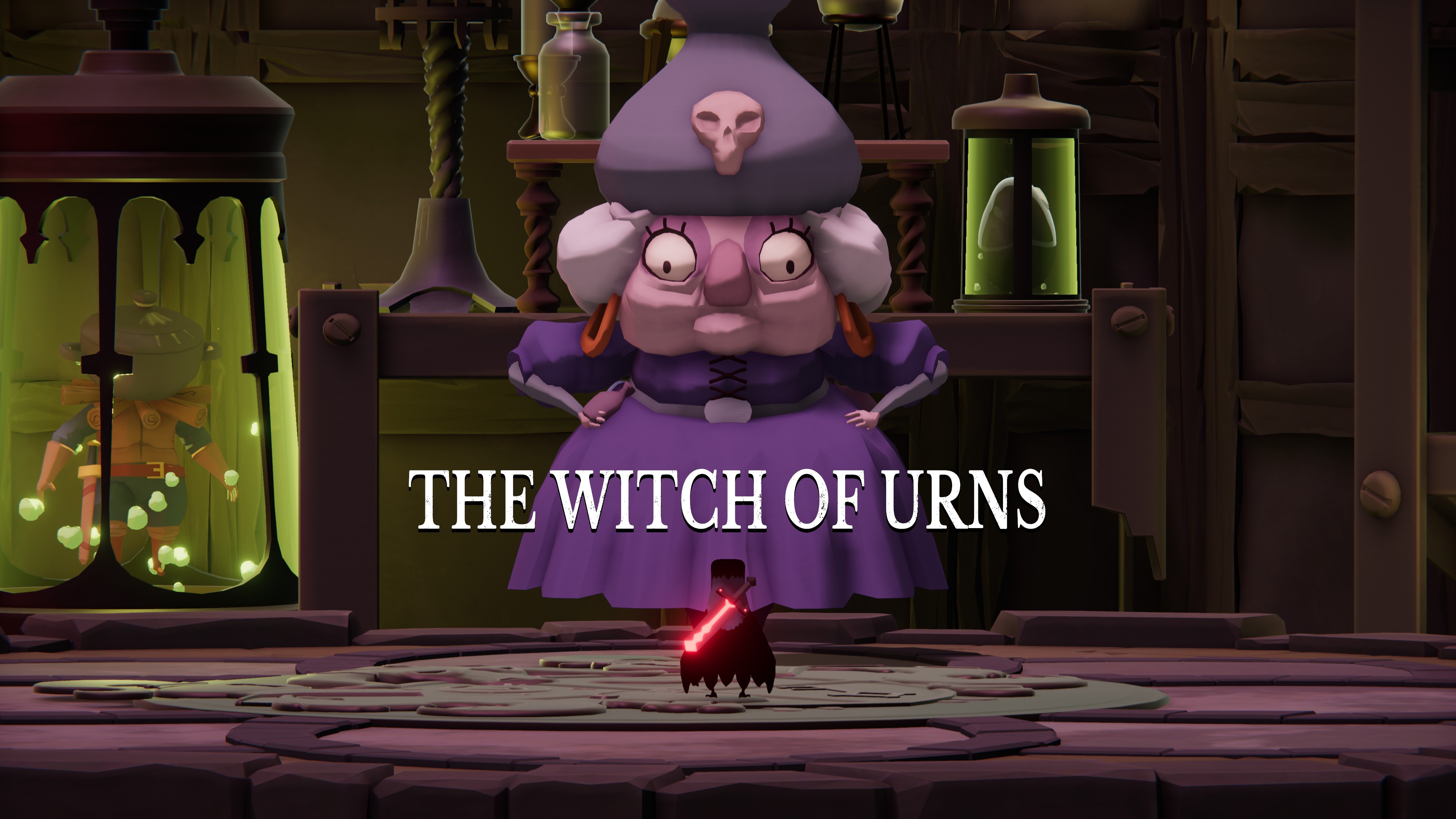