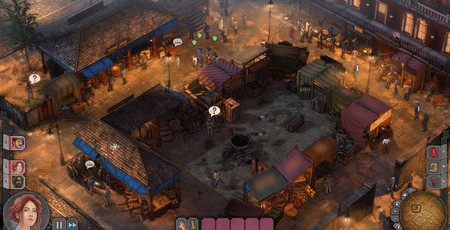 Of all the things that Desperados III does brilliantly, my favourite is how it proves that games don’t need to restrict your ability to save in order to be challenging. Over the last few years, I’ve lost countless evenings to games that refuse to let you manually maintain your progress in some misguided attempt to be the next Dark Souls. I don’t mind games being difficult, but if you’re going to deliberately hinder a player’s ability to progress in that way, you better have a damn good reason for doing so. Desperados III doesn’t just let you save whenever you want, it actively encourages you to do so. At the outset, the game openly advises you to save often, and if it notices you haven’t saved in a while, a little timer will appear on the screen, informing you that it’s been a whole minute since you slapped the F5 key. In fact, Desperados III is so insistent that saving is cool and good and nice, that I had to reduce the regularly of its reminders from one minute to five. Calm down, Desperados! We’re on the same wavelength.

Desperados III might have an outlaw’s free-roamin’ approach to saving your progress, but this doesn’t make its real-time tactics any less challenging. If anything, it allows developers Mimimi games to be more ambitious, creating dazzlingly intricate puzzle-boxes where failure is a crucial part of figuring out solutions. The template of Desperados III is broadly the same as that of Mimimi’s previous game, the splendid Shadow Tactics: Blades of the Shogun. Rather than controlling a bunch of rōnin in feudal Japan, however, here you corral a group of rootin'-tootin’ outlaws led by John Cooper, who’s on the hunt for a man named Frank. The game itself is a blend of stealth, strategy, and puzzling, with you navigating large levels teeming with guards, and using a wide range of tactics and abilities to get the upper hand against overwhelming odds.

A typical scenario in Desperados III might see you trying to cross a town square or a building site without being spotted by the eagle-eyed henchmen of the DeWitt company. Even the greenest cowpokes you encounter are highly perceptive and quick to react. They also know how to cover each other’s backs, positioning themselves so they can see each other at most (not all) times. Your job is to find the loose threads in their defences and gradually pluck at them until their whole setup unravels. To that end, you have control of up to five different characters, each of whom has a unique set of skills that helps them get the edge on the opposition. Cooper, for example, is your archetypal cowboy, able to chuck a bowie knife at an opponent for a quick kill, distract them by tossing a fake coin, and if necessary, blast two enemies at once with his twin pistols. Kate, meanwhile, is your distraction specialist, able to disguise herself and walk openly around enemy camps, flirt with guards to make them turn in her direction, and even briefly lead them away from their posts.

The differences between individual characters go beyond abilities, too. Hector, your burly Mexican pal, can pick up two bodies at once. Cooper can pick up one, and Kate can only drag them slowly across the ground. Cooper can also climb up walls of vegetation, enabling him to access many areas other characters can’t. It’s all very carefully thought out, and mastering each character’s strengths and weakness is a satisfying element of the challenge. A standard tactic in Desperados III is to send Kate into an area to draw the attention of a guard, letting the other characters either slip past or take him out. What will often happen instead is you’ll discover there’s a second guard standing opposite the one Kate is distracting, alerting them to your presence. You’ll reload and send Kate in as before, but also use Cooper’s coin trick to briefly distract the second guard so you can slip through. But oh no, that guard’s wearing a poncho, which means small distractions like Cooper’s coin toss don’t work on him very well. Fail, reload. This time, you send Kate to flirt with the poncho, and use the coin trick on the other guards, which turns his attention just long enough for you to get Cooper and Hector past him.

This is, of course, an extremely simple example of how Desperados III’s iterative puzzle-solving works. The actual scenarios Mimimi present you with are far, far more complex, requiring careful thinking and precise execution to dismantle. To that end, you have “Showdown” mode, which lets you queue character actions and synchronise them with those of other characters, letting you do things like take out three guards watching each other simultaneously. As you progress through the game, the more abilities you unlock, and the more ambitious you can be. By far my favourite character is Isabella, a Creole witch-doctor who can control enemy minds and even “link” enemies together Dishonored-style, so that whatever happens to one happens to another. The missions are also truly enormous. The first proper mission sees you sneaking along the length of an entire train under attack by bandits, as you try to locate some dynamite to unblock the tunnel the bandits deliberately collapsed. Later on, you’ll blow up railroad bridges, crash weddings, and skulk through the night markets of New Orleans. There’s even a mission where your team has to regroup after a legendary bender in the local saloon, trying to avoid the watchful forces of the local sheriff while recovering from stinking hangovers.

That’s another element of Desperados III that I like. It’s a challenging game, but also an affable one. Its Wild West setting is presented with its tongue firmly in its tobacco-filled cheek, and while its characters are largely well-worn Western stereotypes, the sense of camaraderie between them makes them a likeable and engaging bunch. Indeed, the presentation is generally excellent. The maps in particular are fantastic works of digital art, retaining that painterly art-style of the game’s isometric predecessors, but with fully-3D geometry. Generally speaking, I like Desperados III a lot. I do have one niggling issue, however, and that’s with the controls. By default, Desperados III has actions assigned to the left mouse button and selection to the right, which is the opposite approach of most strategy games. This can be changed easily enough, but a more frustrating issue is by default your party moves as a group. This doesn’t make much sense, as you very rarely want to move them all at once. Moreover, it’s easy to slip into group movement without noticing, meaning you’ll often find yourself accidentally raising the alarm because you tried to move one character and instead moved all of them. When so many of your plans are reliant on hair-trigger precision, having one of your character suddenly waltz out of the bush they’re hiding in is incredibly annoying.

Still, the quickload key is only a few inches away, and I never got tired of tapping it and tweaking my latest plan in the search of stealthy perfection. All told, Desperados III is every bit as good as Shadow Tactics, and cements Mimimi’s reputation as the new kings of real-time tactics.