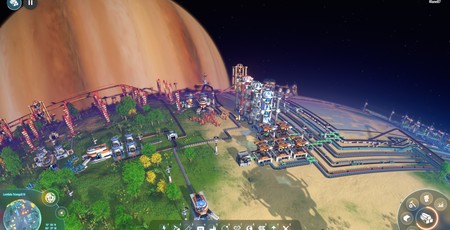 A quick note before we begin. Dyson Sphere Program has only just launched in Steam Early Access. Normally I wouldn’t review a game that’s still in open development. While there’s a (valid) school of thought that any game that you have to pay for is a legitimate candidate for review, regardless of its current state, personally I prefer to review games as the developer intended the final vision to be. 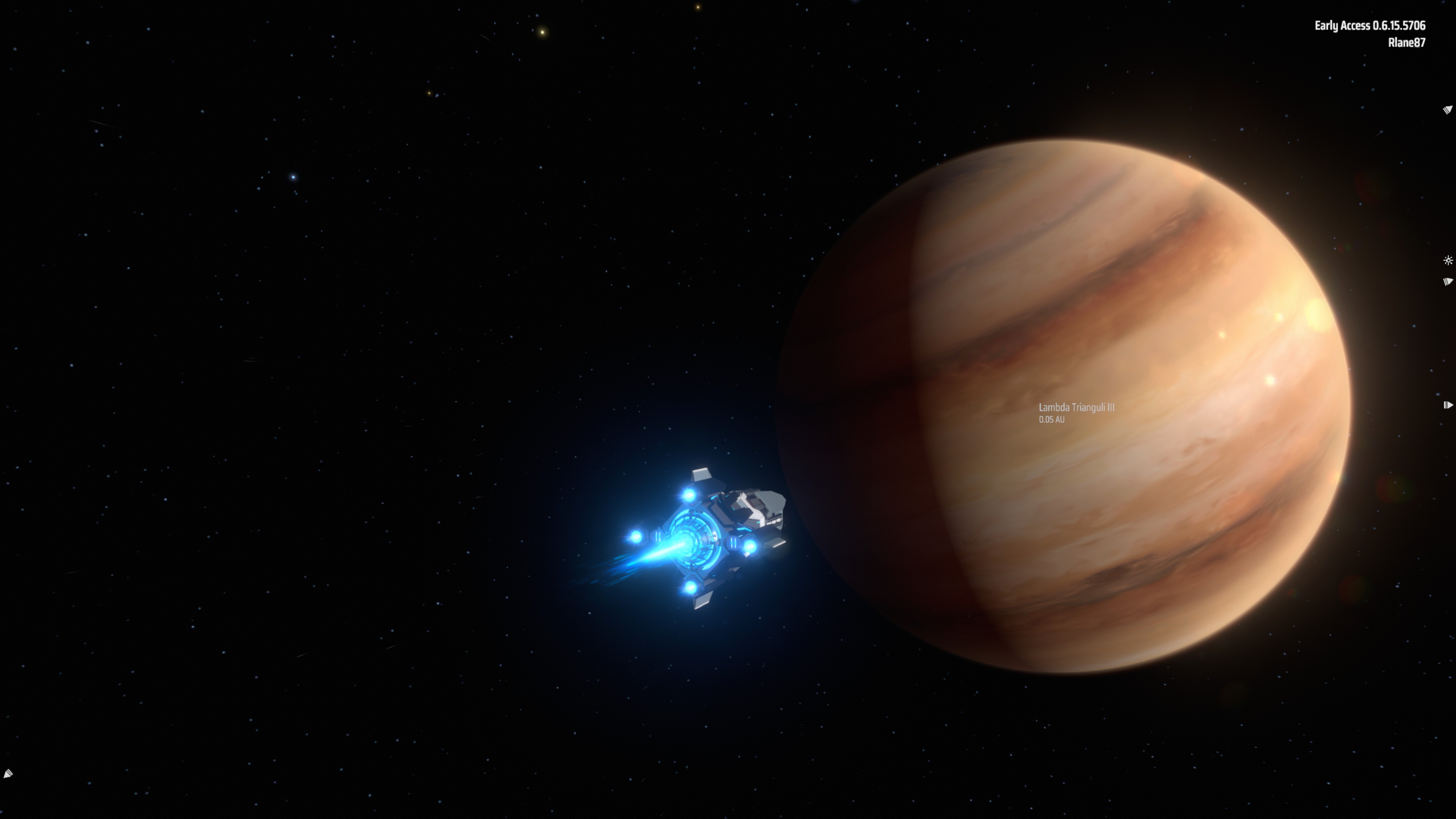 I’m making an exception for Dyson Sphere Program, however, as for all intents and purposes, its Early Access launch plays like a complete experience. There are bugs and niggles, alongside some quality of life features that I’d like to see added, but beyond this, Dyson Sphere Program is already a contender for my game of the year.

Created by Chinese developer Youthcat Studio, DSP is a factory management sim that owes more than a little credit to the sublime Factorio. Playing as what resembles a lost Transformer, you mine resources, build assembly lines, and establish production chains in a gloriously compelling feedback loop of creative puzzle solving. 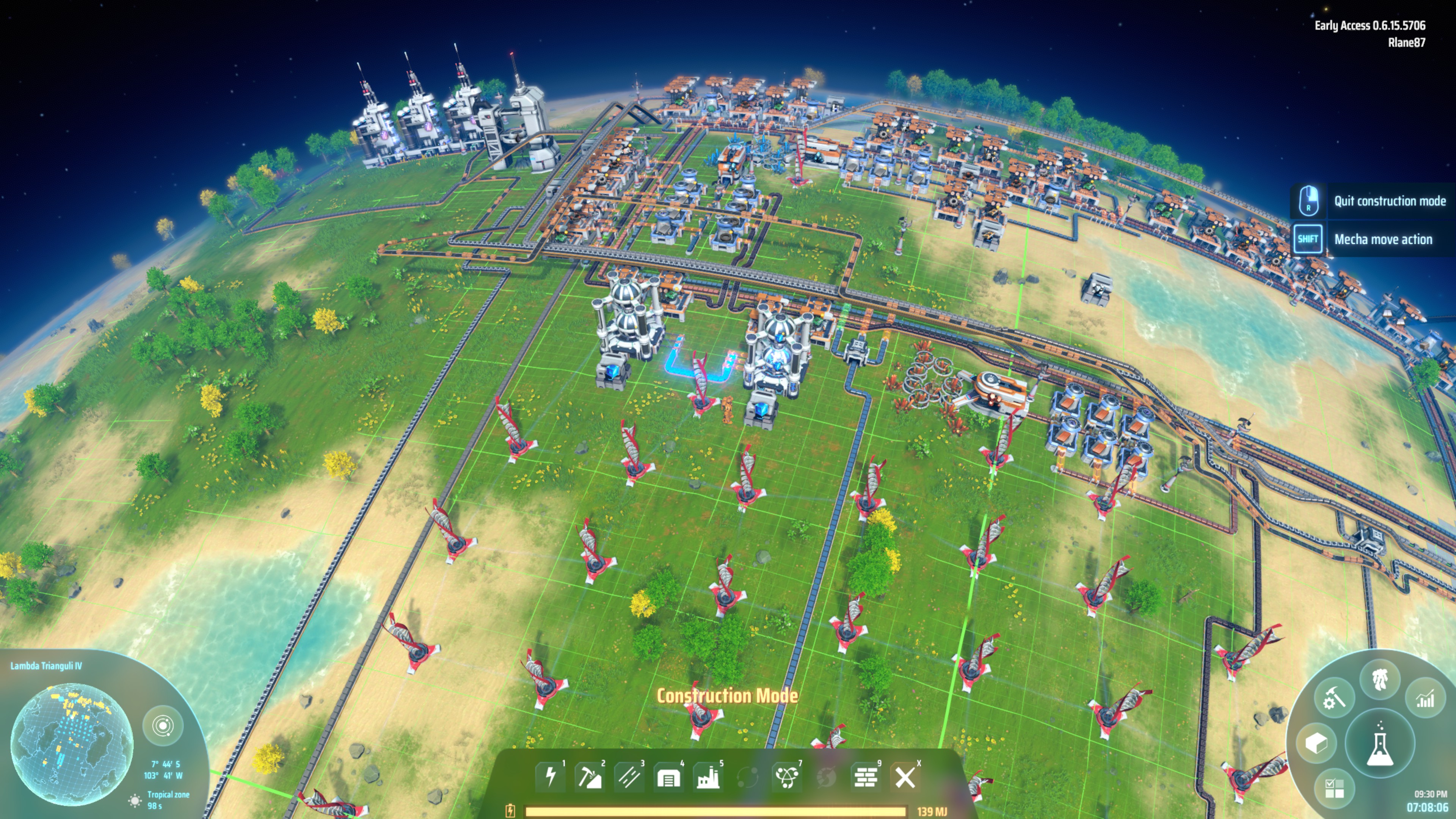 Aside from being 3D, what separates DSP from Factorio is the scale at which it plays. Whereas the main goal of Factorio is to build a rocket to escape the alien planet you’re trapped on, DSP’s primary object is to build, yep, you guessed it, a Dyson Sphere. For those unfamiliar with the concept, a Dyson Sphere is a theoretical megastructure that would, if it was possible to build, harvest the entire energy output of a star.

It’ll be a while before you commence construction of DSP’s titular project, however. Prior to that, there are a hundred smaller projects that need attention. Starting off on a single planet, your initial goal is to get your factory up and running. You need to mine starting resources like iron and copper and smelt them into useable plate, establish power generation and energy networks, and construct assembly lines for basic components – transport belts, assemblers, storage boxes, and so on. 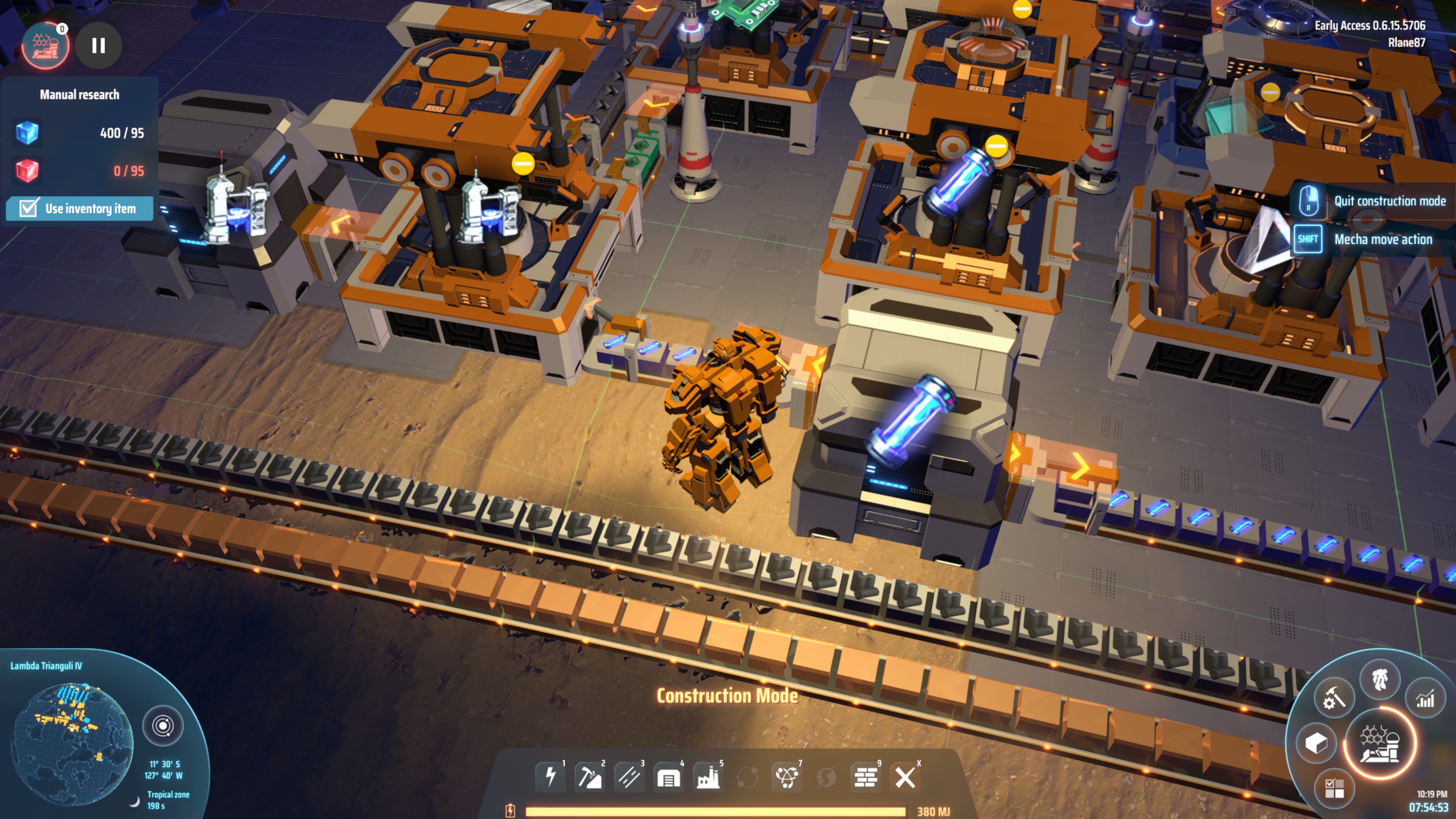 Indeed, the first ten or so hours of Dyson Sphere Program play almost identically to Factorio. This is by no means a bad thing, and in its mimicry of Wube Software’s management masterpiece, Dyson Sphere Program is equally enjoyable. Compared to Factorio’s brownish aesthetic, DSP is a vibrant and colourful game. The brightly coloured Matrix cubes that fuel your research are a splendid touch, while the way your whole Factory lights up at night is fantastic.

DSP also tweaks the Factorio formula in a couple of ways I like. For example, Sorters, which move resources to and from belts and machines, are extendable, making it much easier to arrange assembly lines. They also have filters built-in and can be upgraded to stack resources, meaning you don’t have to build a half-dozen different types of Sorter, as you do with Factorio’s inserters. Also, since the game is 3D, transport belts can be built at multiple levels of elevation, much like one of Planet Coaster’s rollercoasters. This again makes it easier to thread the belts where you need them to go. 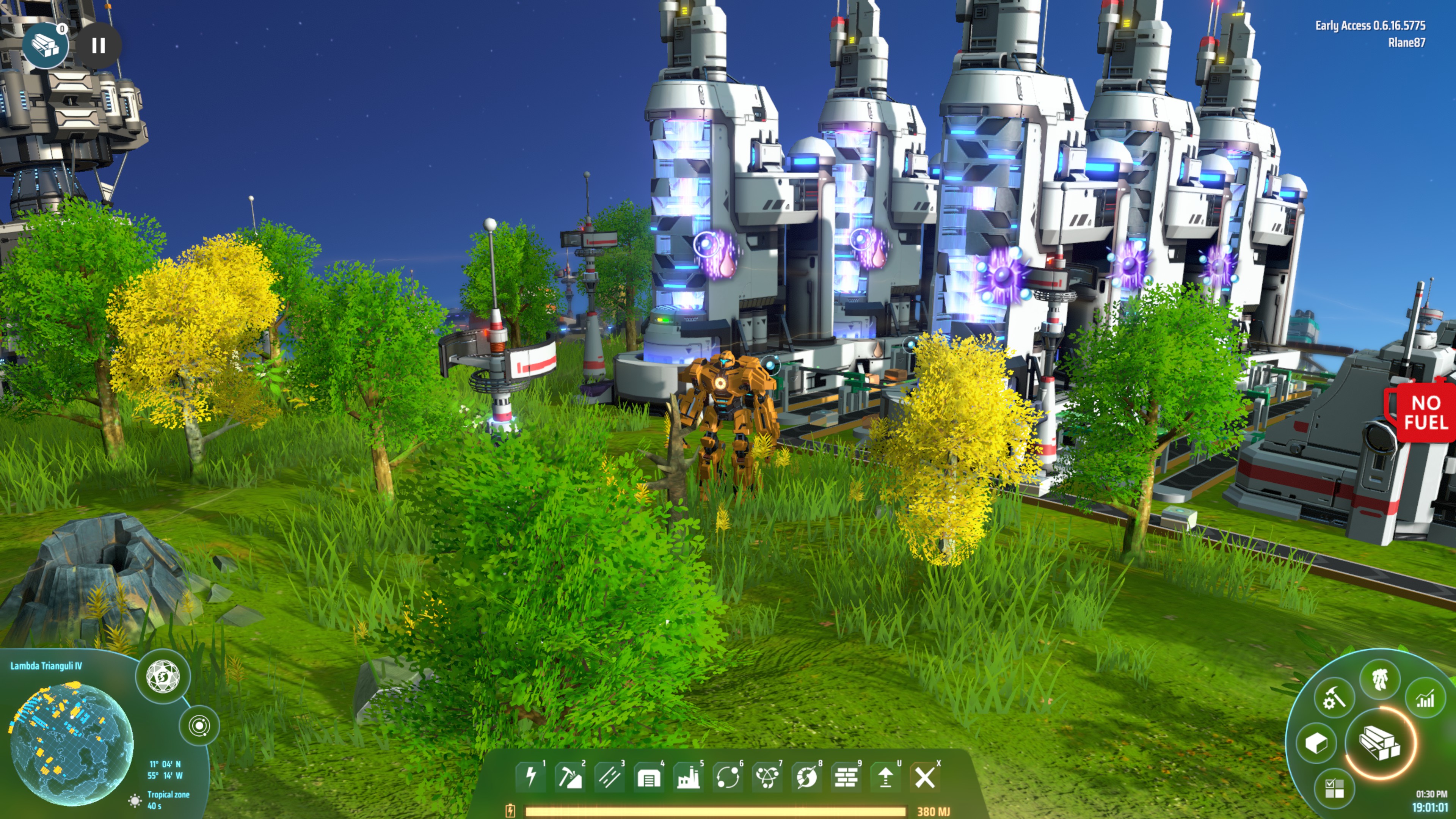 But DSP is more than an effective facsimile of Wube Software’s work, and this becomes apparent when you need to venture beyond your starting planet to continue your construction. Unlike Factorio, which limits itself to a single world, DSP takes place across an entire star cluster. Building your Dyson Sphere requires you to travel to multiple systems, building interstellar logistics systems and harvesting resources from them all.

Putting all this together is enormously satisfying. Mining Titanium on one planet, shipping it to another, then distributing that Titanium to the production chains that need it, delivers a huge payoff when you finally get it all up and running. DSP successfully communicates the sense of scale you’re playing at too. The first time you build a Planetary Logistics System, which uses drones to carry large amounts of resources around a particular planet, is a particularly eye-opening moment. And this is the merest glimpse of what the game has to offer. Later on, you’ll build platforms to harvest resources from gas giants, and even artificial stars, not to mention the vast structure of the Dyson Sphere itself. 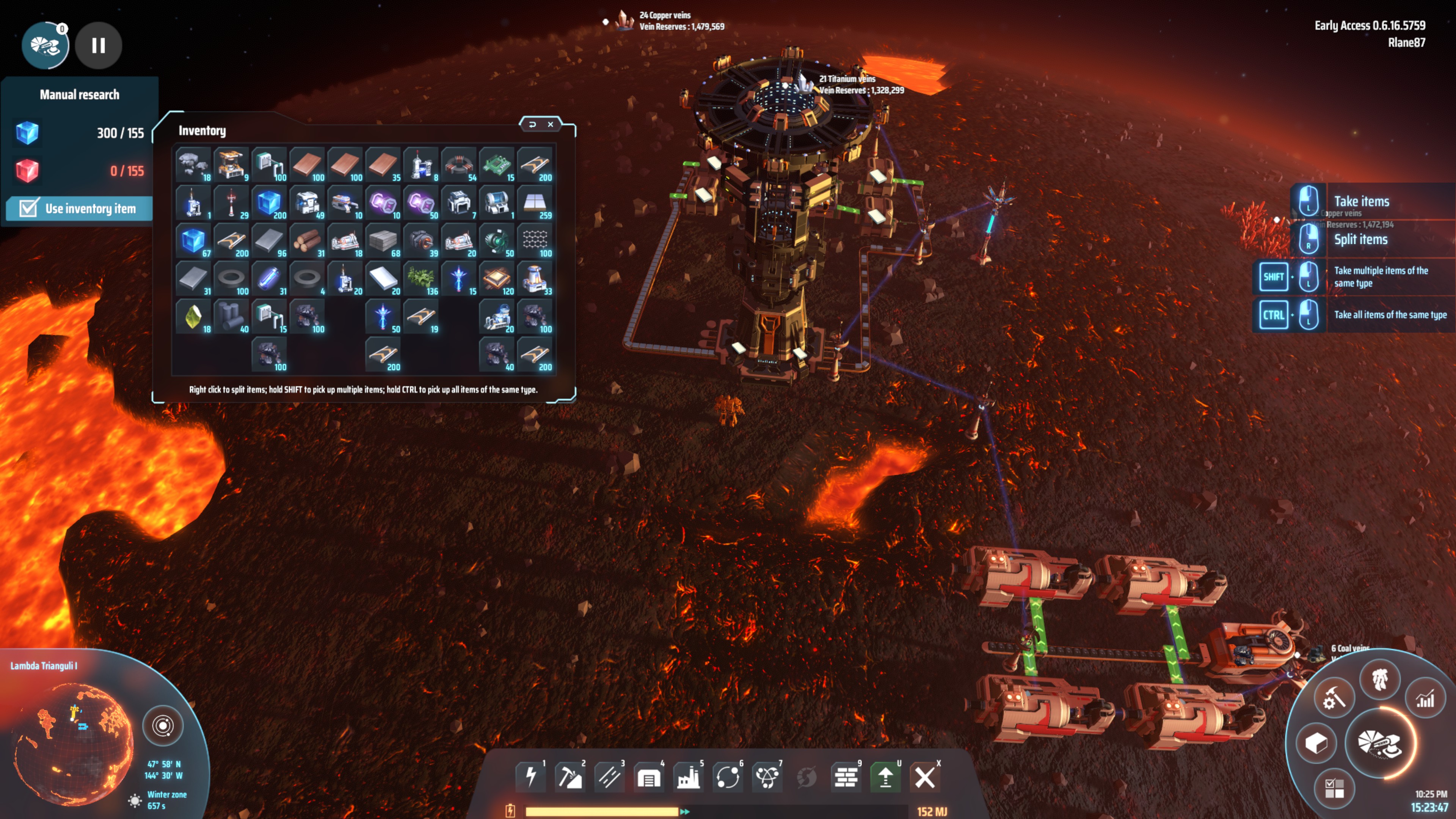 Given it has only just dropped into Early Access, DSP offers an impressively complete management experience, one is well presented and produced. Yet this is not to say it is without problems. While the presentation is generally great, one notable issue is the translation for tutorials and tooltips. They’re generally comprehensible, but rather idiosyncratic. For example, Destroying or deleting items is described as that item being “Devastated”, which sounds weird to a native English speaker.

This is mostly a cosmetic problem, however. It isn’t like DSP has some great emotional drama attached to its words undermined by poor translation. A more significant flaw is DSP arbitrarily limits your movement and building capacities. There are several layers to this issue. Firstly, your mech requires fuel to operate, meaning you regularly need to stop to add coal or graphite or whatever to keep your mech operational. It also has a set battery charge which, when depleted, prevents you from flying and slows down your construction. Finally, when you place an object in the game world, it doesn’t appear immediately. Instead, a flying drone will remove the item from your inventory and physically travel to place it at the designated location. 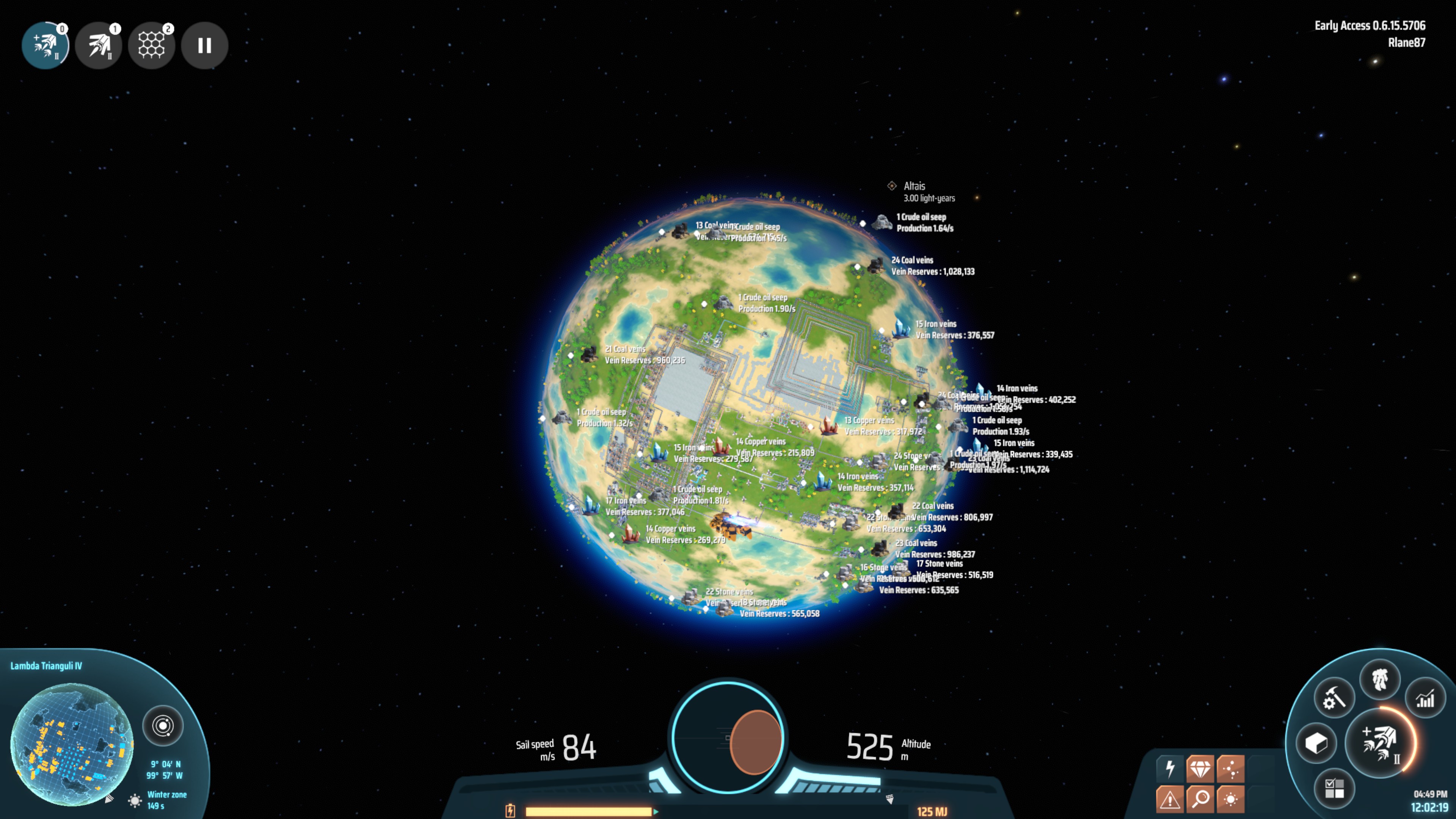 Combined, these features frequently inhibit your ability to perform basic tasks. The refuelling isn’t too much of a problem – at worst it’s a mild inconvenience. But the combination of a limited battery charge and remote drones results in regular frustration. Trying to build a transport belt of any length for example, is made an infuriatingly slow process, as you have to wait for your drones to place each piece of belt individually. Worse, using your drones depletes your battery supply, which makes the building process even slower, and also nullifies your ability to fly until the batteries have charged.

There are ways to mitigate this, such as building Wireless Power Transfer Pylons (which charge your battery) at regular intervals, while upgrading your suit can increase the number of drones and your battery’s overall recharge rate. But these features simply don’t add enough to the game to compensate for the issues they raise. Building your factory is challenging and time-consuming enough without actively inhibiting the player’s ability to perform functions. 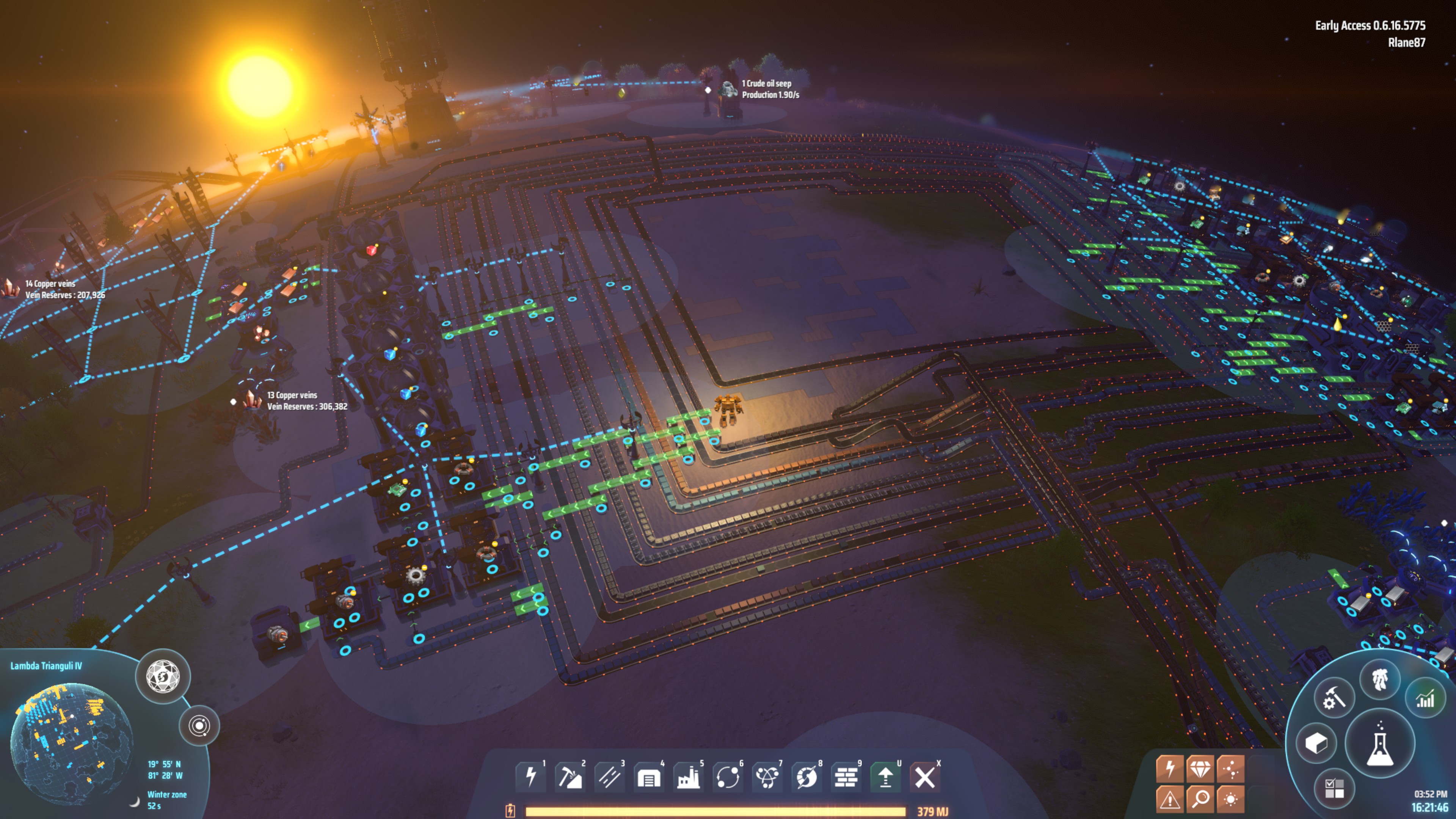 I hope Youthcat Studio address this issue in future, and perhaps add a couple of other features like assembly blueprints for more efficient. Beyond that though, Dyson Sphere Program is a fantastic game, as ambitious and absorbing as the structure it’s named after.