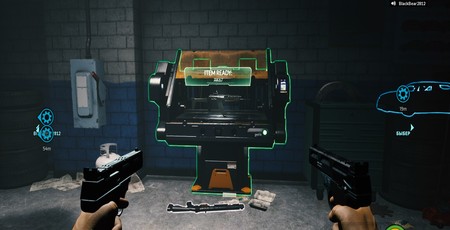 The only way to describe Earthfall is as Left 4 Dead but with extraterrestrial aliens instead of zombies.

Anything else would be disingenuous, because at times Earthfall feels like a mod of Valve's seminal zombie shooter. The gunplay, feel, and even enemies are all reminiscent of Valve's offering, with a few additional mechanics added to the package to allow you to deploy turrets, 3D-print guns, and even aim down the sights of your weapon. Since Left 4 Dead 2's release in 2009, there's been a lifetime of advancements in FPS games, and Earthfall's reason for being is to update the classic formula: move through a desolate landscape as a group of four disparate survivors while shooting the local beasties. Find guns along the way, fulfil objectives, and realise, finally, that the real adventure is the friends you make along the way.

This is all present and correct but Earthfall, sadly, doesn't offer any reason to recommend it over the Left 4 Dead titles. At its best, Earthfall just about manages to match the carnage of Valve's franchise, but often it plays like a poor imitation and fails to capture the magic that made the original game so compelling. It's hard to place exactly where things go wrong for Earthfall. The missions offer some entertaining objectives, such as restoring power to a hydroelectric dam or trying to repair a truck with parts from a junkyard as you're overwhelmed on all sides by the alien menace. The 10 missions in the game are wrapped around two separate narrative arcs as the human resistance seeks to first understand the aliens and then destroy them. There are plenty of fragments of lore hidden away, earned through play or found in the field, and it hints at a world I would want to explore more of were I not stuck blasting my way through a series of grotty roads and grim concrete structures.

In single-player, or with an anonymous team of player characters, the game wasn't compelling enough to keep me playing it. Usually for a review I'll sit down and try to invest in the game with several long sessions, but with Earthfall I found I could handle just one or two missions at a time before I had to go and do something else. Your AI teammates are capable when it comes to shooting, but they often seem more interested in killing the smaller aliens who charge at you and attack with melee strikes, rather than, say, the alien that had picked me up over its head and was shaking me back and forth in an effort to break my neck.Thanks a lot, team. With a team on voice chat, it becomes more bearable, but I struggled to find people willing to play for long, as the title suffers somewhat on the replayability front. Play a mission once and it feels familiar, and by the second or third playthrough it becomes asinine, with the ability to build turrets and gates making every choke point a controllable fight. Left 4 Dead actually got around this problem with the director occasionally opening up different areas and the fact that its combat is more unpredictable, while here it's just a case of building the walls and turrets in the best possible place and opening up.

Most of the enemies you fight can be beaten down with the muscle memory honed from years of horde mode shooters, but I did enjoy the Blackout enemy, which had rotating shields that could soak up a phenomenal amount of firepower. It hints somewhat at the game that we could have had, if only Earthfall had been a little bolder and taken more risks with its enemy design. Weapons, too, show flashes of brilliance hidden behind a muddy disinterested sheen. You can find guns, but more often you'll actually 3D-print what you want, a nod towards the sci-fi theming. Many of the guns are satisfying enough: room-clearing shotguns, punchy submachine guns, and a few special toys that include sci-fi weapons and high-damage sniper rifles. Sadly, though, the enemies often don't react to them like they're truly powerful. A fatality often sees an alien fall into a heap rather than knocked flying by the impact. The guns are well realised, but without the ability to sell the impacts it feels like there's a key part of the puzzle missing.

Earthfall isn't without its charm, it's just that the team working on the game seems to have worked so hard to try to emulate Left 4 Dead that it hasn't taken the opportunity to try and put its own stamp on things. The genre is now full, with games like Vermintide 2 showing that you can push the boundaries but still deliver solid action. Earthfall isn't bad: It hits the fundamentals, and the world it creates is far better than the parts that are shown in the game. Sadly, the game itself doesn't take enough risks, doesn't define itself well enough, and just flat out isn't distinctive enough to make an impact. You might get a kick out of Earthfall, but I'm hoping the team behind the game get to work on an Earthfall 2 and start making some bold choices, because I want to play the game this team makes when it's let off the leash a little instead of trying to send up a classic and failing.