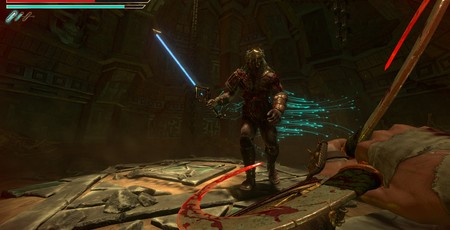 Elderborn is a more authentic Conan game than virtually every game that actually features Conan. It’s a lean and furious action fantasy that doesn’t so much get to the point as run you through with it. There’s no grinding, no survival elements, no RTS mechanics. Just you, a big sword, an ancient city, and lots of foes that need killing. You play a typically brawny barbarian type (male or female, I should add) who bravely ventures into the questionably-named city of Jurmum. Once the head of a mighty and oppressive Empire, Jurmum was besieged by a rebel Army led by a warrior named Janus. After Janus’ army entered the city, it fell silent, with neither its inhabitants nor Janus being heard from again. Now, legends tell of a great prize hidden inside the Jurmum’s walls, and the Elders of your tribe have dispatched you to claim it.

That’s all the story Elderborn needs to offer three chapters of old-school hack ‘n’ slash violence. There are two key inspirations behind Elderborn’s first-person combat. The first is the criminally underrated Dark Messiah: Might and Magic, whose framework Elderborn adopts for its basic foundations. You perform light attacks by pressing the left-mouse button, and heavy attacks by holding it down. Blocking is performed with the right mouse button, while a quick tap of the F key will cause your character to perform a hefty kick, useful for punting enemies over perilous ledges or into spike traps. The other major inspiration, as is the case with almost any modern action game, is Dark Souls. This is evident in certain aspects of the combat. Some weapons, like spears or sickles, parry rather than block. Time a parry right, and you open up a window to perform a powerful counter-attack that will often lop an enemy’s head clean off. Souls also serves as the basis for the more general game structure. Instead of a manual save, you respawn at life-giving fountains scattered throughout the game world. These also refill your health, let you level up your character, and of course, respawn all the enemies in the game world.

Much about this combination works well. Considering Elderborn is obviously made on a budget (and costs eleven quid) the core combat is excellent. Enemies are smart, slickly animated, and respond enjoyable to being attacked. Given the game’s relatively short length (around 4-7 hours depending on how skilled you are) there’s an impressive breadth in enemy type too. Your opponents include undead soldiers who hide behind a shield, acrobatic mummies who attack with sickles, and tricky Assassins who can vanish in a puff of smoke and before attacking you from behind. The way the game combines these enemies results in electrifying and often fiercely challenging combat. Trying to battle a mummy and two undead soldiers while spear-chucking zombies harass you in the background will get your blood flowing, often literally. While Elderborn is overtly a challenging game, unlike Dark Souls it offers several difficulty levels. If you find the default difficulty impenetrable, you can lower it, which is good. That said, a couple of enemy types do irritate regardless of difficulty. The main culprits are the scorpions, which can obliterate your health bar with a single sting. It’s a shame Elderborn’s developers didn’t learn from Dark Messiah’s mistake of including annoying arachnids that are no fun to fight.

Sadly, this isn’t Elderborn’s biggest problem either. That would be weapon variety. Officially, Elderborn has eight weapons, but these are split into four groups, swords, spears, hammers and dual-wielded blades. Within those groups the weapons are functionally very similar. Hence, you’ve only really got four weapons to play with. Compounding the issue is that weapons which parry attacks are far more useful than weapons that block attacks. Not only is the parry and counter supremely effective at dispatching all but the strongest enemies, the faster attacks of parry weapons are also much better at interrupting enemy combat flow. Oh, and you get an upgrade that deflects enemy projectiles back at them, which is both extremely useful and extremely awesome.

Consequently, once you’re about a third of the way through the game, your hammers and swords become largely redundant. Swords in particular are no fun to wield. They’re too slow and heavy, almost identical to the hammer but with a weaker block and a lesser damage output. They need to better occupy the middle ground between the hammer and the parrying weapons, giving you greater speed than the former, and greater range than the latter. This problem puts a dampener on what is otherwise a robust and enjoyable combat system. Fortunately, as the game pressed forward, I found myself playing less for the fighting and more to explore Elderborn’s delightfully Conan-esque world. The early game sees you climbing through the cave systems and catacombs beneath Jurmum. Riddled with nasty spike-traps and perilous drops, these areas bring to mind classic Conan stories like The Scarlet Citadel and the Tower of the Elephant.

After a scintillating boss battle, you then enter into the city proper, which is one large level where you’re given a certain degree of choice as to which direction you head. The final third takes a turn for the surreal which I won’t spoil, but brought to mind the (frankly superior) Amid Evil with all its weird spatial shenanigans. This variety in locations makes up for the comparative lack of variety (or at least, lack of practical variety) in the weapon selection. Elderborn really is like two or three Conan short stories sewn neatly together, offering a straightforward, action-packed fantasy adventure that’s enjoyable from the get-go, with just enough detail to the worldbuilding to convince, and changing up locations quick enough that you’re never bored. It may not quite live up to the games its inspired by, but for a tenner plus change,  Elderborn cleaves it way into our recommendations.