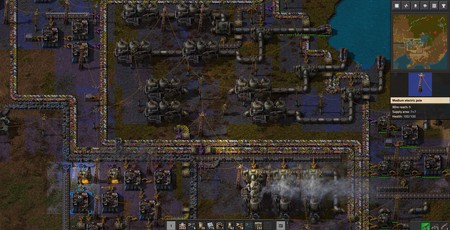 I’ve spent half an hour trying to write the introduction for this review of Factorio, but I can’t concentrate. All I want to do is stop writing this and play more Factorio. I’ve got a problem, you see. Actually, I’ve got about two dozen problems, but there’s one in particular currently rattling around my skull like a dum-dum bullet.

If at this point you’ve absolutely no idea what I’m talking about, that’s fine. You’ll understand soon enough. This is what Factorio does to your brain. It comes along with its little man stranded on its little planet, asks you to build one measly drill to mine some iron ore, then takes over your entire head-sponge. I don’t like calling games addictive, partly because it’s lazy and partly because it’s not an aspect of games that should be extolled for its own sake. But Factorio eats up every facet of your thoughts like nothing else I’ve ever played.

The reason for this has to do with precisely how Factorio engages with you. It’s simultaneously a creative construction game and a cold, logical puzzler about making everything fit in the right way. In essence, it’s a game about creating your own puzzles to solve, and that combination is more compulsive than a bowl of amphetamine-laced smarties. Stuck on a hostile alien planet, your goal in Factorio is to build a rocket so you escape. But building a rocket isn’t exactly easy, as demonstrated by how they named a whole damn science after it. Building a rocket means fashioning advanced metal alloys, constructing rocket engines, making computers, creating plastics, and synthesizing rocket fuel. This means mining metals, creating electrical circuits, drilling for oil and harnessing electricity. This in turn means building all the things you need to do those other things. Oil pumpjacks, steam engines, copper and iron smelters, mining drills.

The list goes on and on. The sheer amount of stuff you need to build and research makes it impossible to do all of it by hand. So instead, what you need to do is automate the building process wherever you can, establishing assembly lines that can take in resources and pump out products without any intervention from you.

You might that automating everything in this way would make Factorio boring, but the opposite is true. Automating production of object is far more satisfying than constructing them by hand. Setting all the different elements of the assembly line – the assemblers that make objects, the transport belts that move resources around, the inserters that pick-up resources from conveyor belts and put them into the assemblers – is always a wonderful puzzle to solve. Watching the line then kick into motion and seeing the results of your work churn out at the end is hugely gratifying.

Yet with every new assembly line you establish, your factory becomes more complicated and more prone to errors. As your operation expands, you constantly need to pump more raw materials and more objects types around the line. But having too many objects can be a problem too, as it’ll clog up your transport belts and ultimately bring your factory to a standstill. So you need to mediate the flow of resources through the factory, ensuring everything is getting exactly what it needs, and finding ways to divert or reduce the flow of resources when something becomes out of balance.

In this way, you’re constantly tweaking and tinkering with your factory as well as expanding it, replacing coal-powered machines with electrical ones, upgrading your smelters from stone to steel so they can smelt ore faster, building new assembly lines to create base resources like iron plate and copper wire so they can feed larger assembly lines easier. None of this is dictated by the game itself. It all evolves organically from your own ideas, a list of tasks and challenges generated entirely by your responses to the open-ended puzzle Factorio offers.

Factorio makes itself difficult to criticise. You could argue that its quite a complicated game. And it is. But it’s never obscure or obstructive. The tutorials carefully guide you through the basics of factory management, and you learn how to build an efficient and smartly laid out factory simply through doing. You could argue visually it’s a bit on the ugly side, and that it’s top-down perspective can make it hard to spot small problems like assemblers jammed with resources or missing bits of belt. Then again, the game’s fantastic zoom function makes it really easy to get an overview of your factory. So you can usually spot the general area of a problem with relative ease.

Lastly, you could argue that the presence of combat in Factorio is a mistake. Certainly, what I like about Factorio has nothing to do with combat, while the alien bugs that periodically attack your base and smash your production lines can be annoying. But the presence of combat facilitates a wider range of products to automate, from weapons like assault rifles and flamethrowers, to defensive structures like walls and automatic turrets. Also, Factorio features a really clever mechanic whereby insect attacks are triggered by the pollution that your Factory creates. Not only is this a really neat way to address the environmental issues come along with Factorio’s celebration of mass production techniques, it also encourages you to find ways to minimise pollution, to stop harming your own work as well the natural habitat whose resources you plunder. Oh, and if you really don’t like them, you can just turn them off when you create a scenario. Factorio pretty flexible like that.

Basically, it’s a masterpiece, one of the best management games I’ve ever played, and now that it’s actually, finally finished, a firm contender for 2020’s game of the year. Just make sure that when you do play it, you’ve got some space in your schedule, because when you start, you won’t want to do anything else.