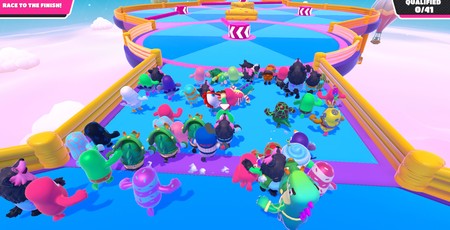 Depending on when you were born, Fall Guys is either virtual Takeshi’s Castle, virtual It’s a Knockout, or virtual Total Wipeout. Either way, the result is the same, a comedy obstacle-course game in which groups of sixty players compete to survive a series of colourful and ridiculous challenges. With each round that passes, the group is gradually whittled down, until eventually a winner is crowned. It’s a silly, frenetic, and disposable dose of fun. Bosh. Review done. Can I clock off now? Seriously? You really want another 900 words of analysis on this? Come on, it’s not exactly Disco Elysium, is it? Fall Guys is the gaming equivalent of Saturday Night TV. All that’s missing is Ant and Dec and a premium-rate phone competition.

Oh, all right. Let’s see if we can’t tease some more criticism out of this bit of throwaway fun. Whatever you do in Fall Guys, you always control a small, jellybean-like character that waddles along like a duck in urgent need of the toilet. Aside from running, your character can do precisely three things, jump, grab objects, and dive like a Premier League goalkeeper. In an interesting inversion to typical game design, all these abilities are designed to feel underpowered and weedy. Like a horror game, the idea is to make you feel ill-equipped for the challenge ahead, only rather than being played for scares, it’s played for laughs. This makes sense in the context of the absurd challenges you face. Each “match” of Fall Guys consists of about five individual rounds, each of which throws a randomly-picked challenge at you. Some of these are based upon classic gameshow ideas like Takeshi’s Castle’s “Knock Knock”, where contestants must run at a line of doors, some of which will open, while others will not. Then there are challenges that you could only get in a video game. One of these is Whirlygig, where contestants need to run through a forest of giant windmills that can whack you halfway across the map.

Not all the challenges are obstacle courses. There are memory games where you need to remember blinking pictures on a tile floor, then move to the appropriate tile to avoid being dropped into oblivion. There are team challenges based on real-life games like football and tag. There are completely madcap scenarios like “Hex-a-gon” a late-stage challenge where players stand atop a layered honeycomb of floors made of hexagonal tiles. Each tile disappears when you stand on it, meaning it’s only a matter of time before you run out of floor, and drop to the next level. Most of the challenges are fun to participate in, although some are undoubtedly better than others. I personally prefer the obstacle courses to the team-based challenges (if I’m going to suck at a game, I prefer to do it without dragging anybody else down). The exception to this is the challenge involving giant See-Saws, which can see-saw its way into the nearest bin. You can’t all jump onto one side of the see-saw at once, folks, didn’t you pay any attention in physics?

Indeed, it’s worth noting your enjoyment of Fall Guys will largely hinge upon your tolerance for other players spoiling your fun. It’s easy to be knocked over by other players, particularly in challenges with specific chokepoints like Knock Knock. In these situations, victory will come down to luck rather than skill. Also, while most players are concerned with their own attempt, there are some who enjoy giving you grief, deliberately trying to knock you over or dragging you away from your objective. For me, this is all part of Fall Guys’ chaotic fun. But if you’re bothered by this, maybe you should give Fall Guys a wide berth. Also, chill out! It’s a daft game about sentient lozenges falling over. You’re not fighting over the last tin of beans at the end of the world, so who cares if someone knocked you off the virtual bouncy castle?

From a core play perspective, Fall Guys carries its concept off with a colourful, knockabout style. There are a couple of problems worth addressing, however. The first is hopefully temporary. Currently, it can be difficult to get into a game of Fall Guys, as it has been far more popular than the developers expected. Consequently, Mediatonic is struggling to handle the server load from literally millions of people wanting in on the fun. I’m not going to mark them down for this, because they’re working to resolve the issue as quickly as they can, and unless something goes very wrong, it should only be temporary. Nevertheless, you should be aware of potential connectivity issues when buying. The other issue is one of longevity. As I said, Fall Guys is disposable fun, and I’m not sure how long its shelf-life will be. It might last you a fortnight or so of evenings before you grow tired of the challenges, while the chaotic nature of the game means there isn’t much scope for mastery. According to the developers, this is “Season 1” of Fall Guys, suggesting that Mediatonic has future updates planned. Unlike games like Apex Legends and Warzone, however, I’m not sure the core experience has enough to it keep players coming back once the novelty has worn off, whether new challenges are introduced or not.

Ultimately, though, not every game has to eat up your entire life. It’s OK for things to be of the moment. We underappreciate the value of fads, the way they can bring all manner of people together under one banner, even if it’s for a brief period of time. Perhaps Fall Guys is destined to be the Fidget Spinner of videogames, hugely popular for a few months and then gone from the collective consciousness until it appears on a Channel 5 documentary twenty years later. If that does happen, at least we’ll have one fond memory from the year 2020. Lord knows we need it.