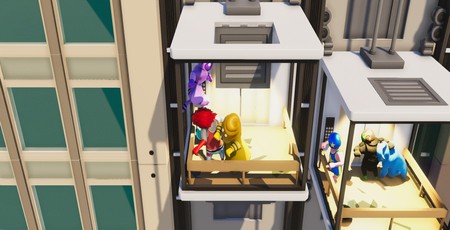 With typically perfect comic timing, Gang Beasts launched right at the tail end of last year, stumbling into the party just as everyone else was leaving. Much as I would have liked to review it at the time, there simply wasn't enough of it, what with all the last-minute gift purchases and preparing the defences against the arrival of the Fat Man. But with January looking drier than a holiday to the Kalahari with Will Self, it's worth looking over what, had I known it was actually being released, would have been one of my most anticipated games of last year.

I first encountered Gang Beasts at Eurogamer's Rezzed Expo in 2014, where it proved to be the second most popular game of the show after that year's hot ticket, Alien: Isolation. Throughout the event, dozens of people were clustered around Boneloaf's tiny booth (the developers had moved offices literally the day before the show, and were ill-prepared for the tsunami of adoration for their game). Over the course of two days, squawks of glee and laughter emitted constantly from that corner of the show-floor. Almost four years on, it remains easy to see why Gang Beasts did, and still does, garner such affection. Its clumsy, chaotic, claymation-like royal rumbles – think Streets of Rage meets Tom and Jerry – are the essence of a perfect party game. It's as fun to watch as it is to play, its physics-powered punching and drunken jelly-baby antics make for splendid emergent comedy, and it requires no skill whatsoever to either enjoy it or excel at it.

With four players all scrapping together, trying to thwack, hoist, and headbutt each other in arenas that range from a boxing ring to an airborne blimp, Gang Beasts is possibly the most fun you can have with three friends that won't lead to a very awkward conversation the next morning. That said, Gang Beasts is only at its best in these very specific circumstances, and on the PC you need to put up with a considerable amount of clunk to enjoy it. That core combat, however, is just as fun as it ever was, although it does feel a little different to when I played it back 2014. One of the chief alterations the developers made over the last three years was to upgrade their engine to Unity 5. This results in a slicker-looking game overall, with more nuanced lighting illuminating Gang Beast's artfully textureless environments, and even more gelatinous-looking combatants. But because Gang Beast's animation is so heavily reliant on physics, the feel of the game has altered slightly with the engine change.

Primarily, the difference between a punch and a grapple is less clear-cut, because of which it's considerably harder to land a physics-powered haymaker. On the other hand, Boneloaf has added the ability to both kick and headbutt your opponents, the latter being a particularly satisfying way to knock a rival flat on their back. Grappling is also much easier to, well, grapple with, and characters are a whole lot stickier when it comes to holding onto surfaces, able to cling on for dear-life to ledges, mantle over obstacles with a cleverly timed jump, and even climb walls with a little patience. Importantly, you don't need to know any of this to have a good time. You can rush into a fight flailing your jelly arms and stand a good chance of either knocking an opponent over or decking yourself in a highly amusing fashion. Yet the combat is only half the story. The other half is dictated by the arenas Boneloaf has designed for its drunken brawls to take place in. Usually they're framed around some precarious position, such as the roofs of two moving lorries, or a crumbling ice-floe surrounding a bobbing buoy. These arenas are often as unreliable in their construction as the Gang Beasts are in their movement. Floors collapse, railings shatter, conveyor belts subtly speed up until whoever is unfortunate enough to be battling on them is cast into the maw of the incinerator below. The clumsy combat combined with these absurd, ACME-sponsored arenas makes Gang Beasts the closest gaming has come to playable Looney Tunes.

Along with a host of new maps, Gang Beast has also launched with a handful of new modes. Melee (deathmatch) remains the go-to mode, but also playable are Gang (team deathmatch), Waves (cooperative survival), and Football (football). Of these, Football is probably the most enjoyable, while Waves is a decent mode if you only have two or three friends available. Surprisingly, there doesn't seem to be an ability to play single-player melee with bots, which is strange because the Waves mode has AI opponents for you to battle. There is, however, an online mode, which lets you battle with up to eight players hailing from random corners of the Internet. It's fine, albeit very barebones. You can invite players to join your lobby or join a random game online, but there's no server browser, which means there's a good chance you'll land in a game that's unplayably laggy, and if you find a server you do like, you'll be dumped out of it the moment the match is over. In addition, melee seems to be the sole mode with a healthy player-base. The rest could have you waiting a long time to find a game.

A far bigger problem is that Gang Beast's catering toward PC players is pretty poor. The menu prompts are all for PS4 buttons, even if you don't have a PS4 controller plugged in. There's no Steam Controller support – you'll have to faff with settings and bind the controls yourself if you want to use a Steam Controller. Indeed, Gang Beasts' menu is generally terribly designed. A particular problem is that you can't look at or re-bind your controls while in a game, which is supremely frustrating. You also definitely need at least four players to get the most out of Gang Beasts. Three players makes for a satisfactory time, but two is a glorified arm-wrestling contest unless you play the Waves mode. This isn't a criticism per-se – it's how the game was designed after all. But I think more could have been done to accommodate smaller numbers of players – bots in all modes, for example, or combined local and online play.

Gang Beasts is not without its problems, and because of that I can't recommend it outright. Nonetheless, I think it is a game that everyone should experience at least once, especially if you like to play games locally with your friends. If not, the online mode is stable, and you can have a fun time in melee, but your experience will only be a shade of the game at its best.