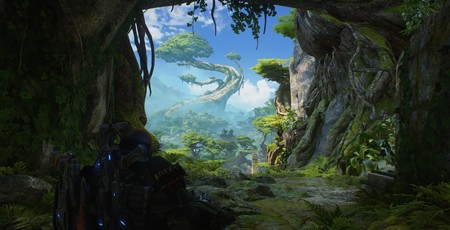 Much as I enjoy exploring the nooks and crannies of a huge open world, sometimes you just want a game that gets to the point. No side-quests teasing your attention away from the trodden road, no level gating forcing you to scour the map for missed activities. Just you, the path ahead, and whatever needs killing in between.

Gears 5: Hivebusters is precisely this. A mini campaign separate from 5’s main story, it’s a pure, no-nonsense slice of Locust blasting fun. Well, almost no-nonsense. While Hivebusters packs an impressive amount of variety into its three-hour length, the truncated running time also causes a few problems that prevent it from being a truly great expansion. 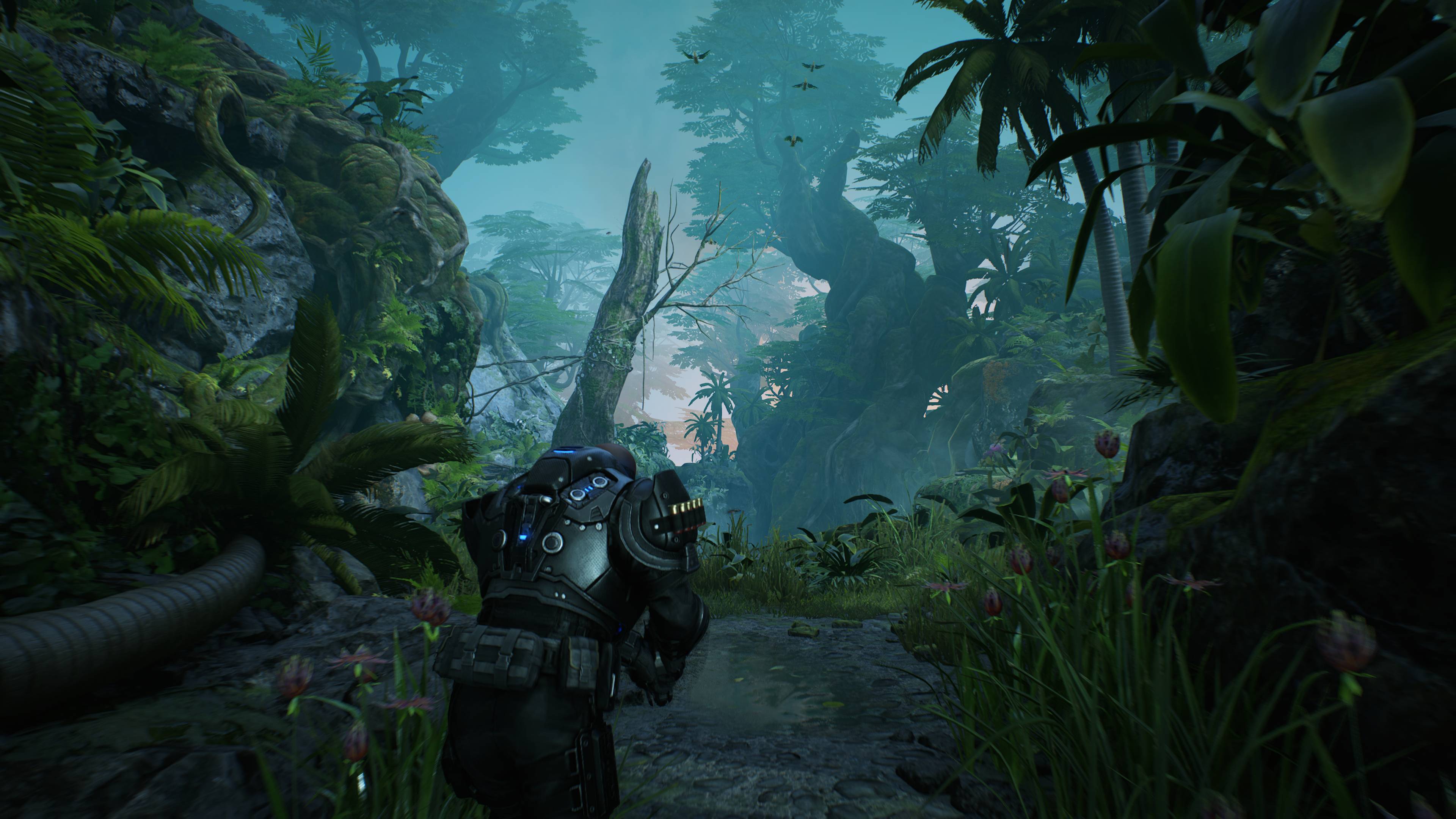 Hivebusters’ premise is slightly unusual. The campaign is actually an origin story for Gears 5’s Escape multiplayer mode. Here, players band together to infiltrate a Locust Hive, deposit a bomb, and then race to the exit before said bomb explodes. To do this, you assume the role of one of three COG soldiers named Keegan, Lahni, and Mac. It’s this trio which Hivebusters’ tale revolves around, charting their first ever Hive-bust in the Galangi Island archipelago. Galangi is a tropical paradise. Or at least, it would be if it wasn’t for the thrumming Locust Hive underneath it, or the giant, hyper-aggressive bird monster that spits a highly corrosive acid at anything with legs. Or the huge, smouldering volcano that looks like it would erupt if a mouse on a nearby island sneezed. Apart from all that, paradise.
Still, after almost a year stuck at home, I’d seriously consider it as a holiday destination. The Coalition has done well expanding Gears of War’s horizons beyond the grey and brown landscapes of the first three games. Galangi is by far Gears’ most colourful destination yet, a land of lush green vegetation, azure oceans, and sandy white beaches. The campaign’s opening chapter gives you a chance to soak in the tropical vibes, deliberately stranding you on the island, and tasking you with regrouping your team before finding a way to escape. It looks magnificent in 4k, and without taxing the GPU too heavily either. 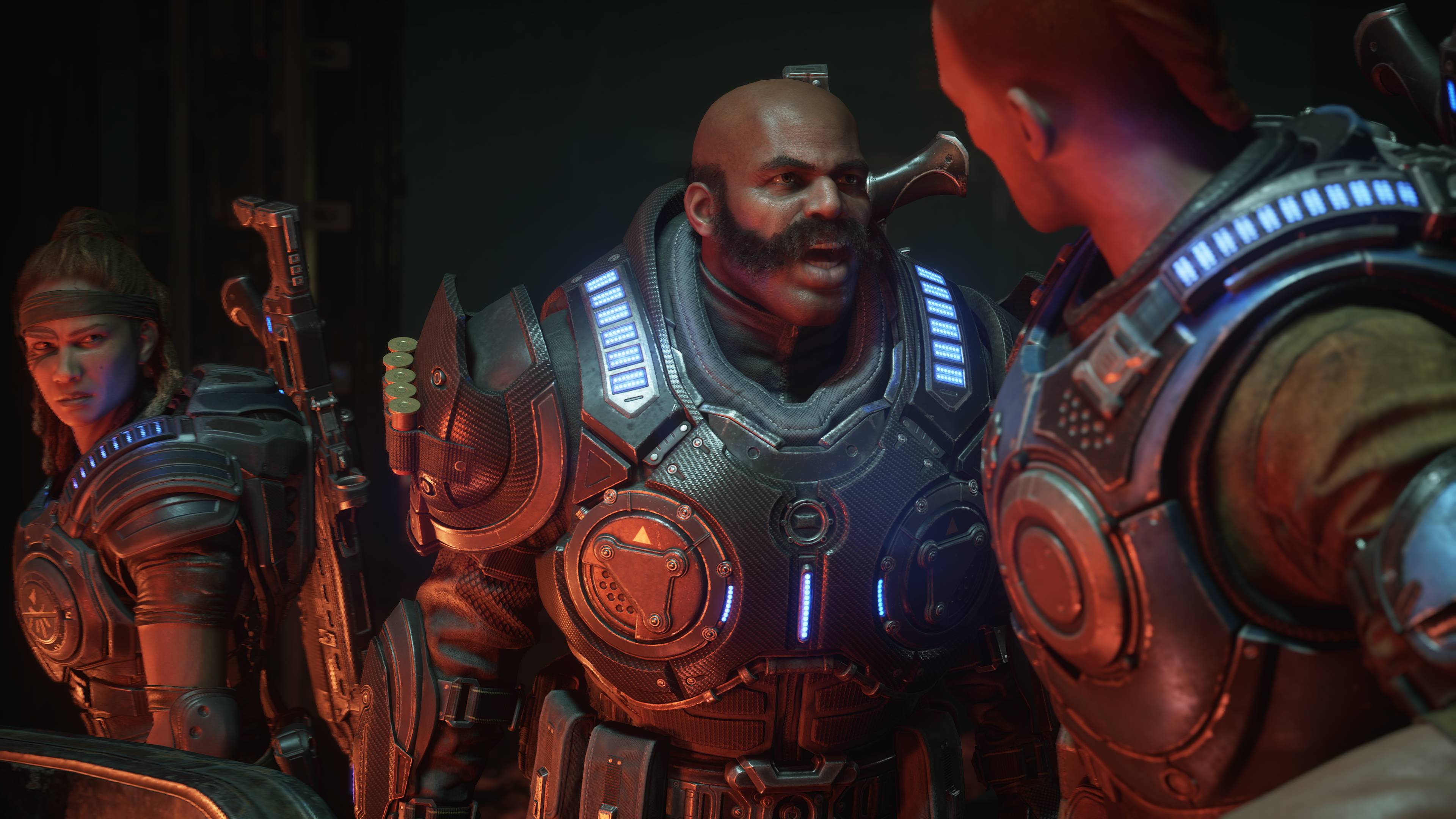 From here, the game charts a fast-paced, knockabout story as Keegan & Co search for a way to permanently put an end to Galangi’s infestation. There are six chapters in total, each dedicated to a new location or event, as the mainline Gears titles do with individual Acts. One chapter sees you searching Lahni’s ancestral home for her missing extended family, while another involves riding a giant, reinforced vault door down a huge lava flow while being assaulted from all sides by Locust.
Hivebusters is frequently a spectacular ride, while tonally it’s balanced just right, not too serious and not too knowingly silly. Your fireteam is a likeable bunch of reprobates. Keegan, the de-facto leader of the group, is a COG veteran who has somehow remained a corporal despite almost thirty years of service, while Mac is a sweary Scottish outlander with precious little respect for authority, particularly authority as insignificant as Keegan’s. 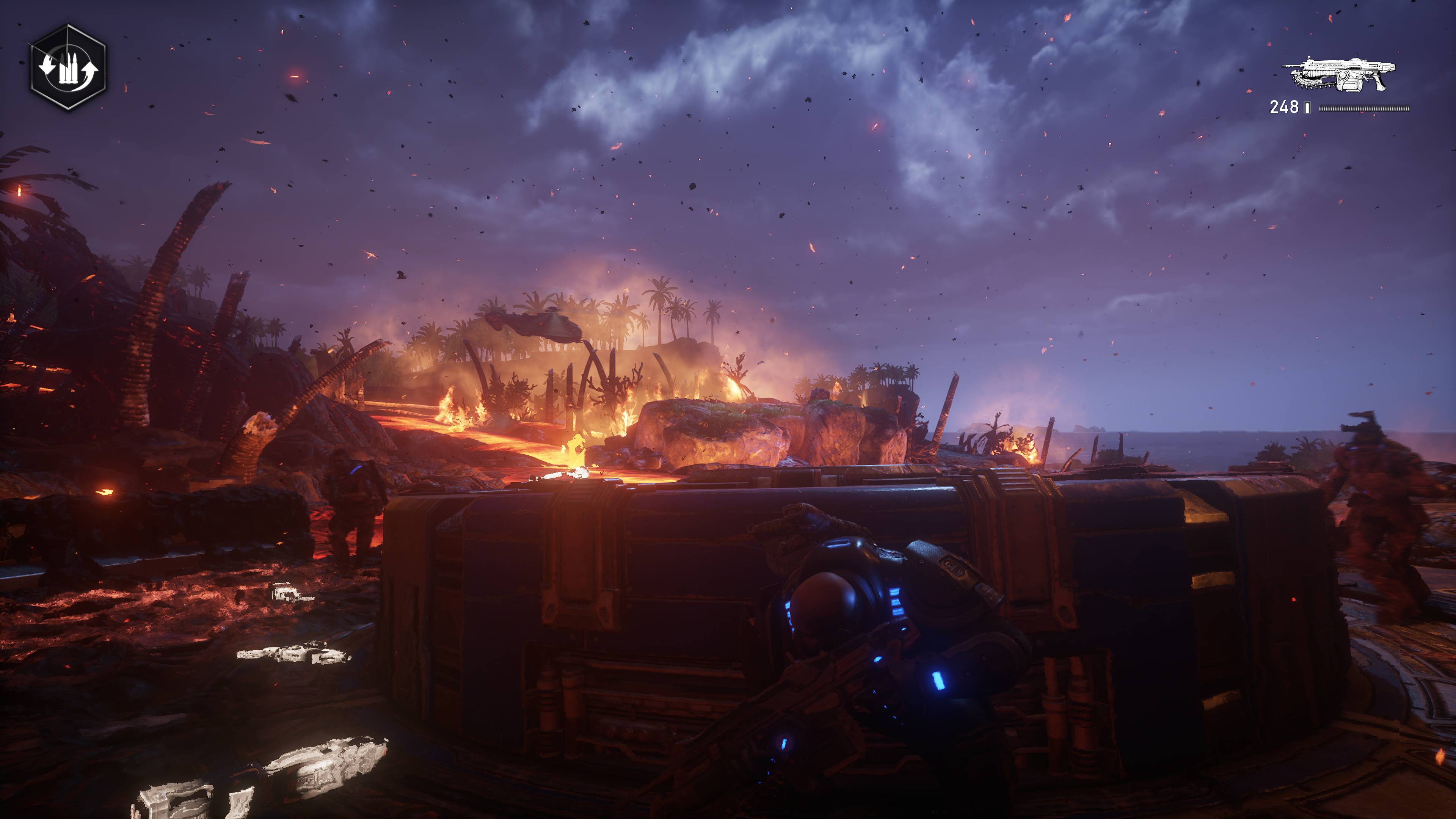 Unfortunately, while the individual characters are fun and engaging, Hivebusters condensed nature means their relationships don’t get adequate time to blossom, and consequently their character arcs often feel forced. Toward the mid-game, Mac goes from being generally affable toward Keegan to seemingly hating his guts, while the final chapter practically spells out how each character has learned from their experiences on the mission. It lacks subtlety, which may be a redundant complaint when discussing a Gears of War game, but a little more care in the writing wouldn’t have gone amiss.
From a mechanical perspective, Hivebusters is largely identical to Gears 5. There are no new weapons introduced, while the only new enemy is the boss you face in the final encounter. The one “new” feature Hivebusters adds is adopted from Escape mode, whereby each character has a unique ability. When activated, Keegan can replenish the team’s ammunition, Mac can create a shield that protects anyone stood behind it, and Lahni can wield an “electroblade” that deals heavy melee damage to enemies. Note that you can play as any of the three characters in either singleplayer or co-op, letting you also wield your preferred ability. 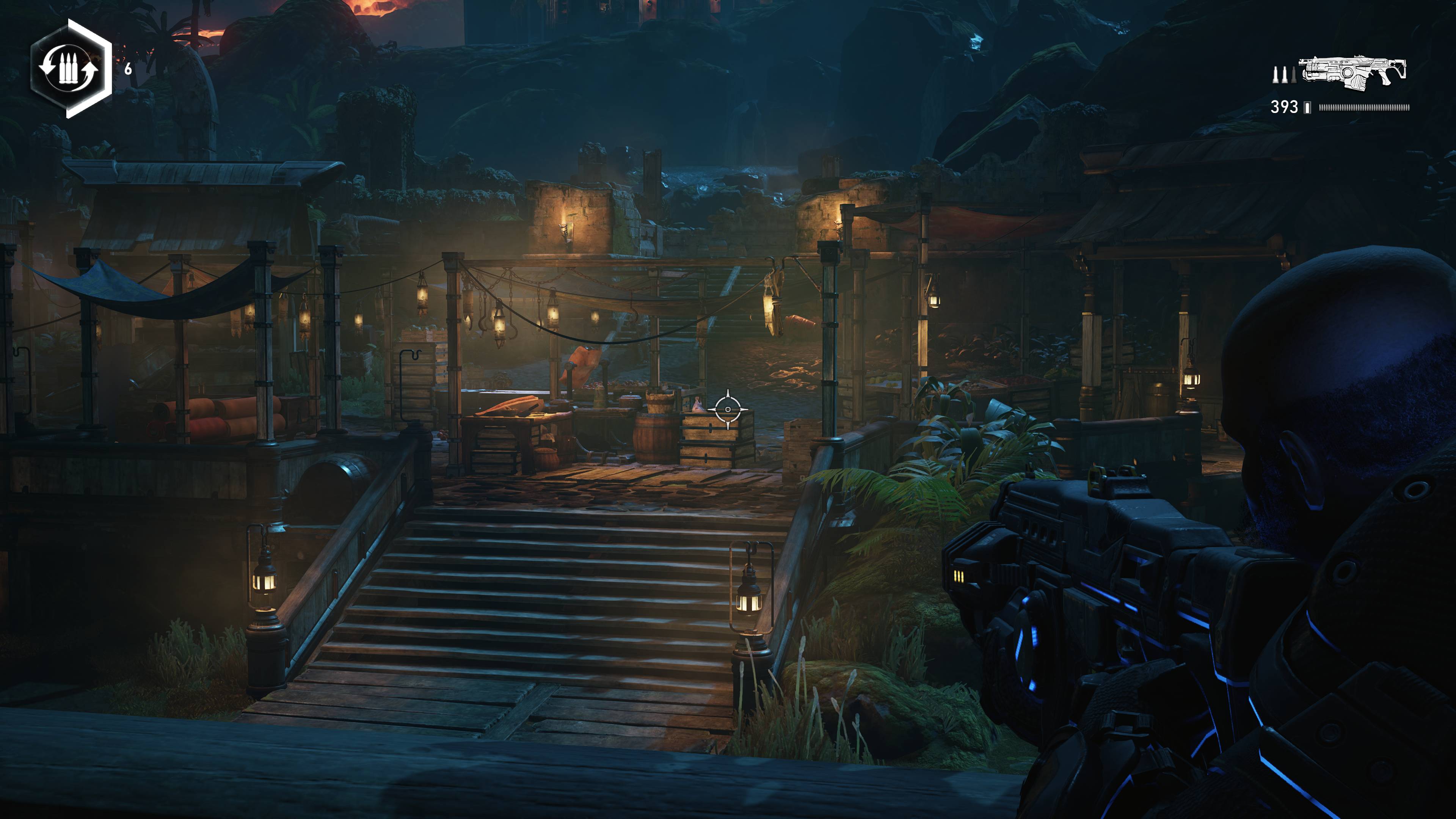 These abilities are nice in theory, but in singleplayer at least, they have the effect of unbalancing the game. Keegan’s ammo replenishing ability is far too generous, and can quickly be upgraded so that it also replenishes explosive ammo as well as standard bullets. This means you can pick up a powerful weapon like the Boomshot or the Torque Bow, and carry it right through the level, obliterating enemies with little effort.
Obviously, if you want more of a challenge then I’d recommend playing on the harder difficulties. That said, while I don’t want to give The Coalition a pass for what is clearly an issue, I quite enjoyed going wild with the more exotic ends of Gears’ arsenal. These weapons usually have to be used sparingly, as ammo is deliberately made scarce. So being able to utilise them freely makes for a refreshing change of pace. 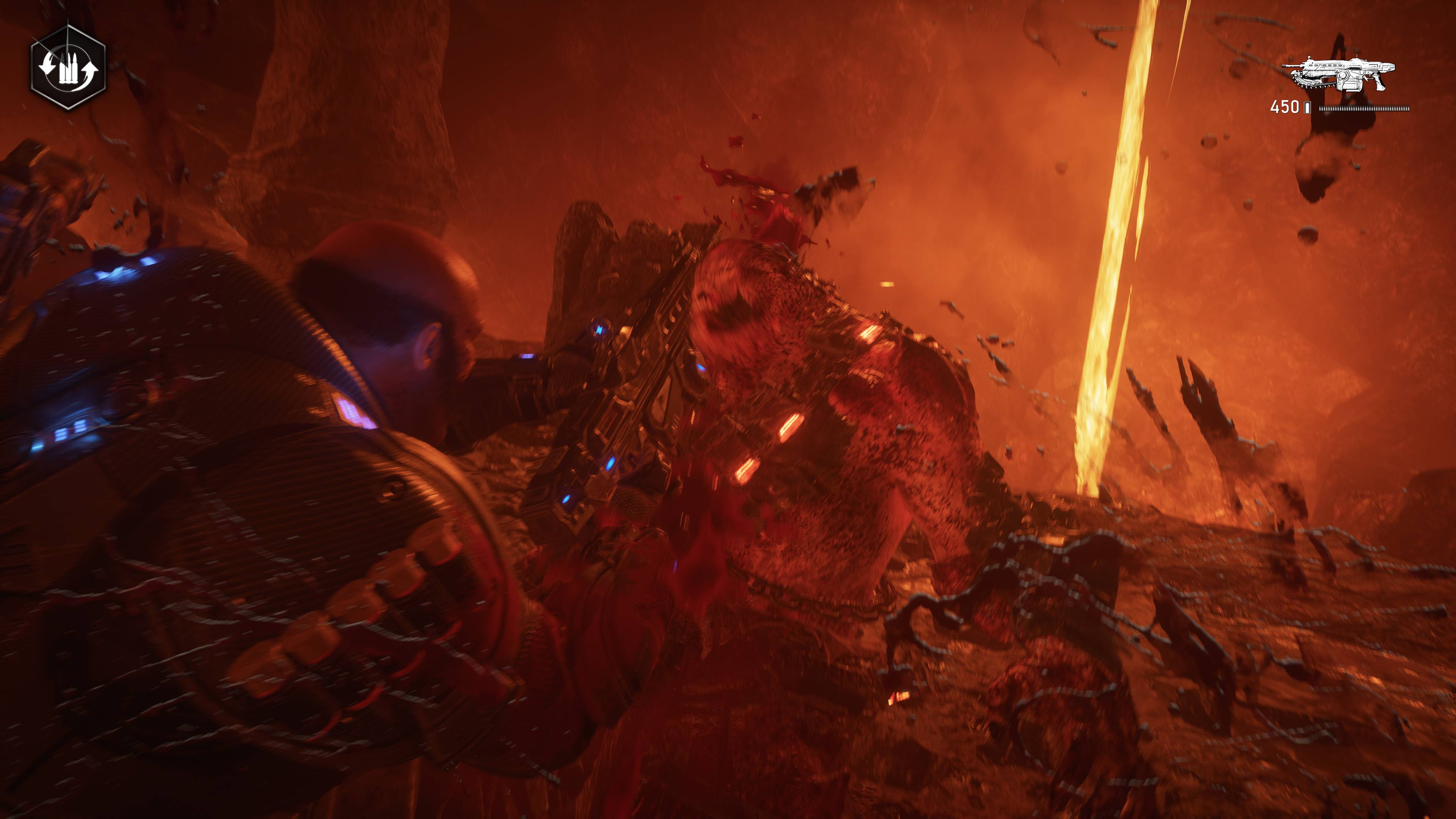 A more pressing problem is that sometimes Hivebusters’ set pieces don’t always make for the best combat encounters. While the lava surfing sounds fun, play wise you spend most of this level simply watching the ride. There are only a handful of points where actually engaging with the combat is mandatory. There’s a similar problem later on involving a boat section, although this sequence is slightly less passive. Sometimes Hivebusters desire to show off ends up upsetting the rhythm of the combat, and that’s a shame.
In the end, though, Hivebusters remains a thoroughly entertaining extra slice of Gears action. If you’re tired of games that take eighty plus hours to complete, and want something that’ll entertain you for an evening and then leave you alone, Hivebusters will do that job admirably. 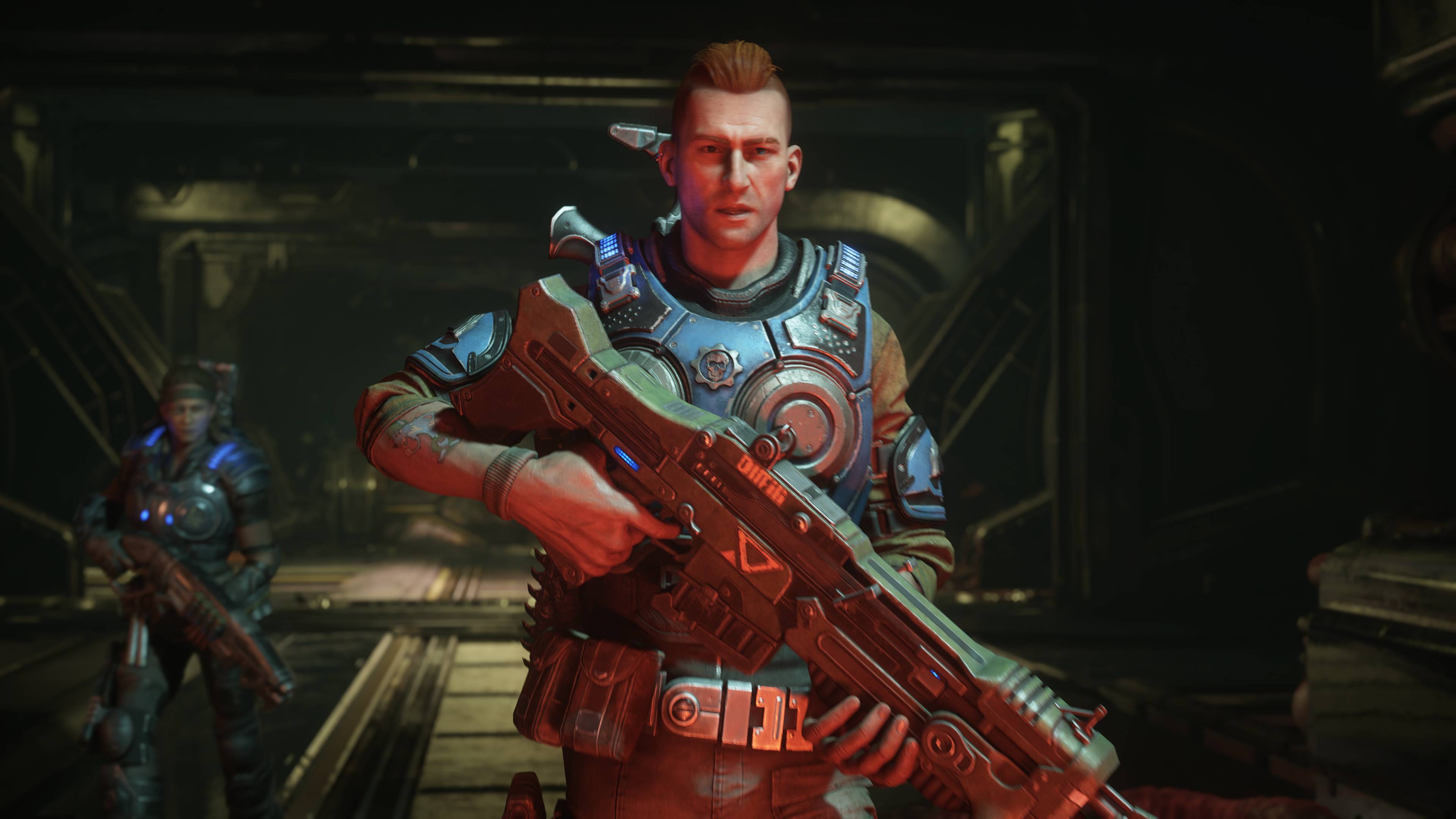