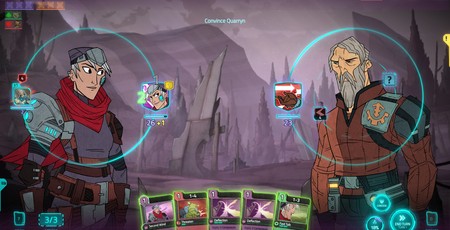 Griftlands is the latest game from Klei Entertainment, a studio with a remarkable knack for transforming whatever it touches into gold. Whether it’s a survival game, a turn-based heist-sim, or a colony simulator about gases, the studio possesses an uncanny ability to turn its hand toward any genre and create innovative and fun and experiences. 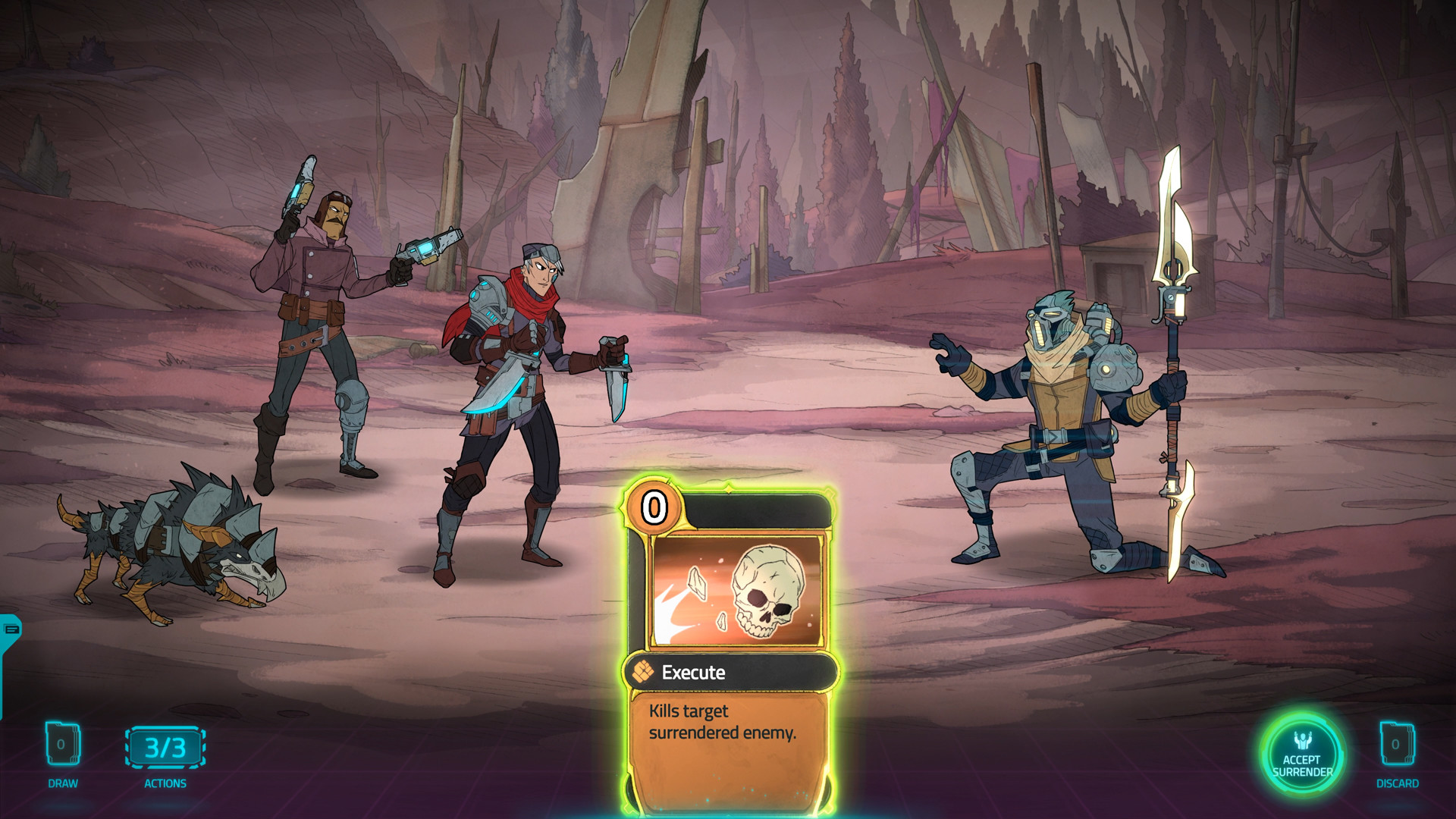 Naturally, therefore, I was excited for Klei’s take on the card battler, one specifically designed to treat dialogue and conversations with the same depth as most CCGs treat combat. Surprisingly though, I find Griftlands much harder to recommend than I anticipated. It’s a well-made CCG that has big ambitions and some smart ideas, but unfortunately it doesn’t quite pull those concepts off.

Taking place in a hodgepodge post apocalypse that mixes sci-fi, fantasy, and anthropomorphic animal people, Griftlands sees you play as a ‘grifter’, a mercenary for hire whose gift for the gab is equal to their skill with a blade. There are three different grifters to play as, each of whom offers a slightly different take on the game. 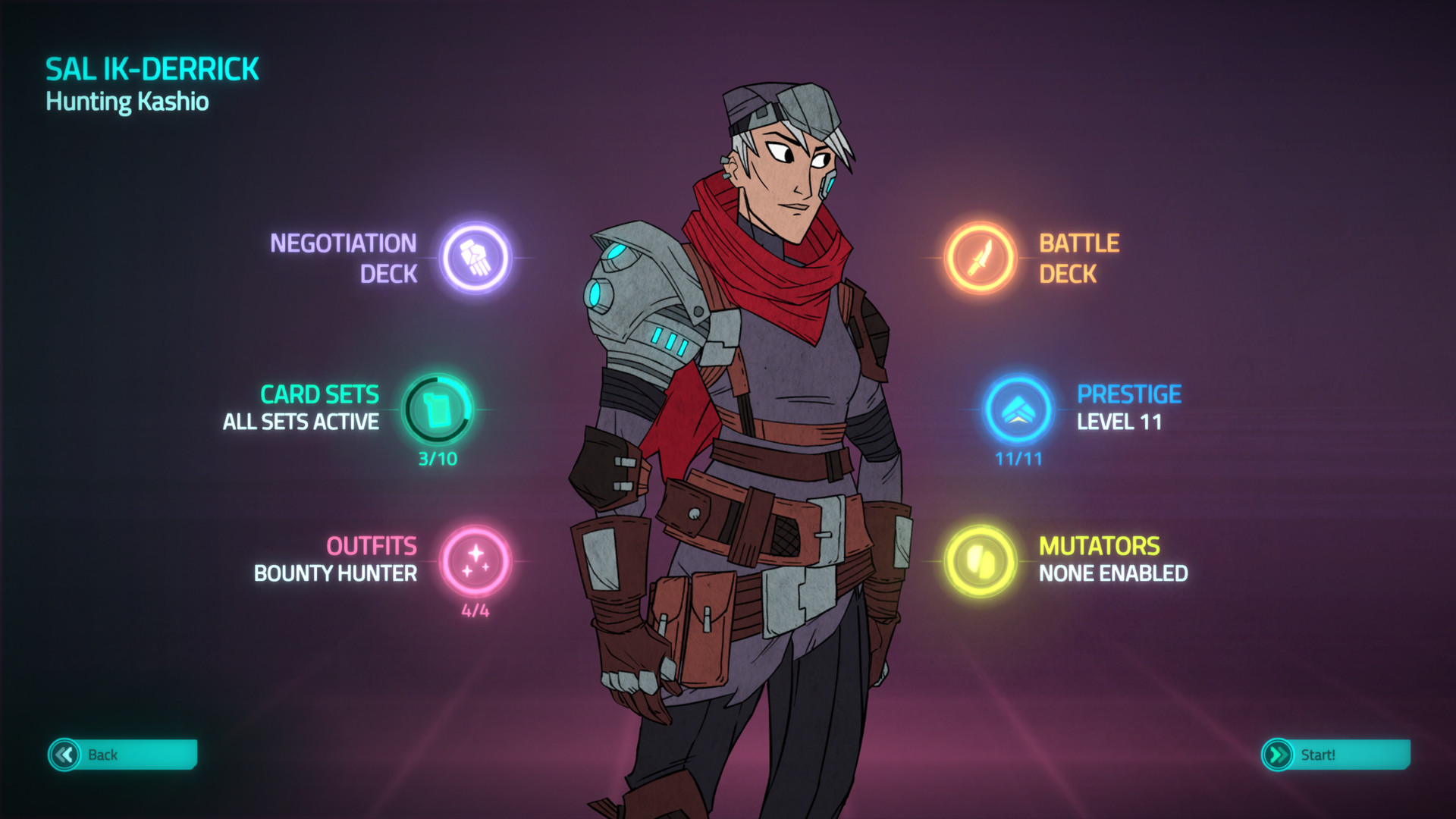 Your initial grifter is Sal, a grizzled former slave who, newly liberated, has returned to the Griftlands to seek vengeance on the woman who sold her into a life of indentured servitude. Before she can exact her vengeance, however, Sal first needs to build up both her reputation and her cash reserves, which means wandering around the Griftlands doing odd jobs for its inhabitants.

By far Griftland’s strongest asset is its writing, which is snappy and laser precise while also being human and funny. It doesn’t feel the need to explain the world or its characters in reams of text. Instead, it neatly summarises what a place looks like in single sentences, providing the outline of a character through a single distinguishing feature, or giving you the flavour of a place with a few deft swipes of the keyboard. This economy of prose does not come at the cost of meaningful interactions, either. All characters have clear motivations behind their actions, and even the most inconsequential of Griftlands’ cast has some depth to their personality. 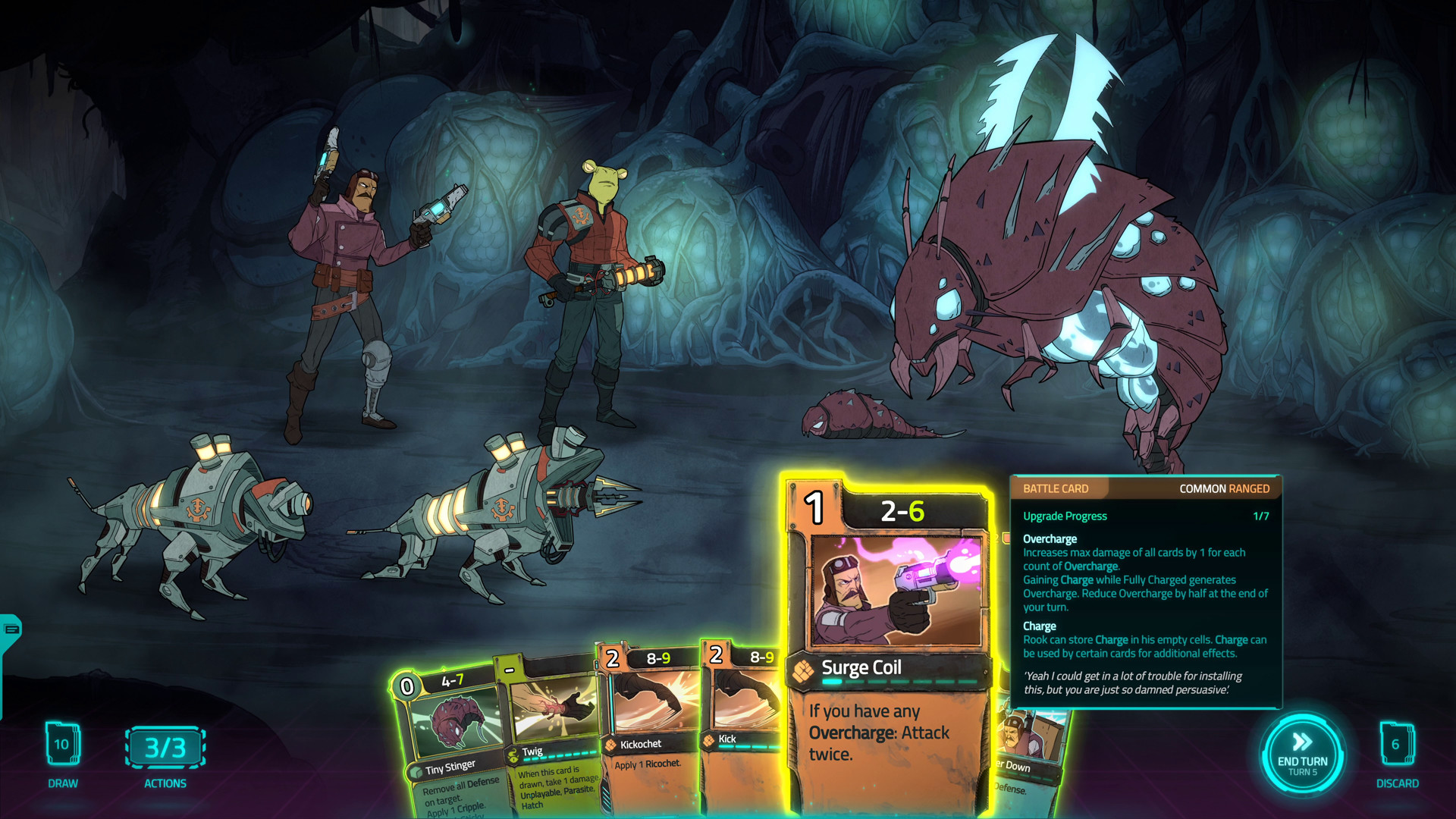 When a confrontation occurs between characters (which happens in basically every quest), it can usually be solved in one of two ways. Either you can fight, battling with other mercenaries or beating on someone who owes a debt, or you can negotiate, trying to persuade the other party into doing what you want. The former is a familiar card battling affair. You draw a hand of cards and have three actions with which to use them. Some cards do damage, while others increase your defence, let you draw additional cards or take additional actions. You can also recruit party members to help you out, either by paying them to join you or earning their trust. 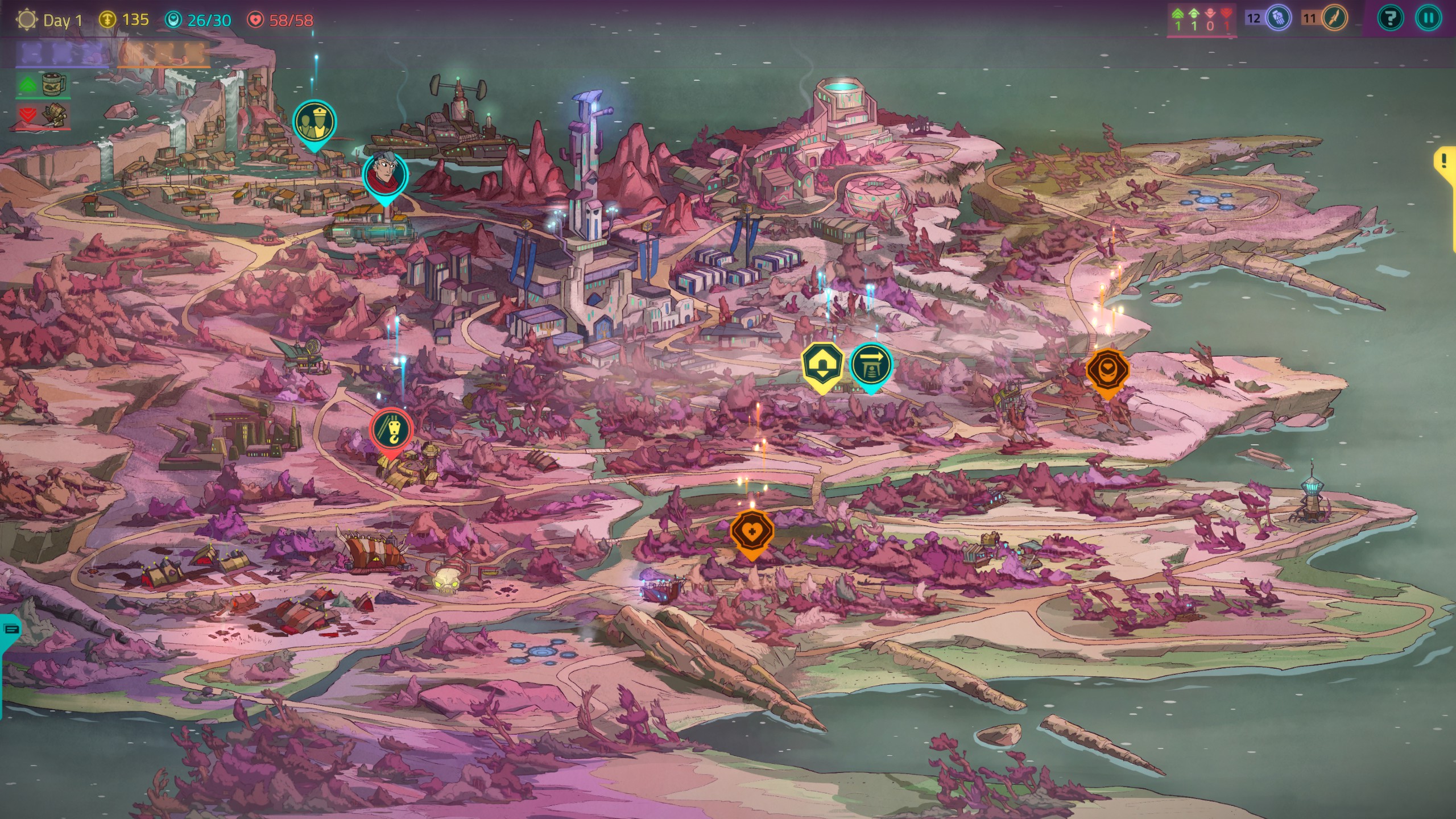 It’s a neat concept. The problem is there’s little mechanical difference between the physical battles and the verbal ones. Griftlands essentially uses the exact same battle system with cards that do roughly the same things. It’s only the names of the cards that are different.

Part of the issue is that, in dialogue, the cards you play don’t actually represent a cohesive argument. The battle of wits is conducted entirely separately from the dialogue system, an abstract soup of debating techniques that fired at one another like bullets from a gun. The characters don’t even speak in a recognisable language. Instead, it’s a variant of The Sims' gobbledegook vocabulary, which sounds weird enough coming from a normal virtual person, let alone a group of tough-looking mercenaries. 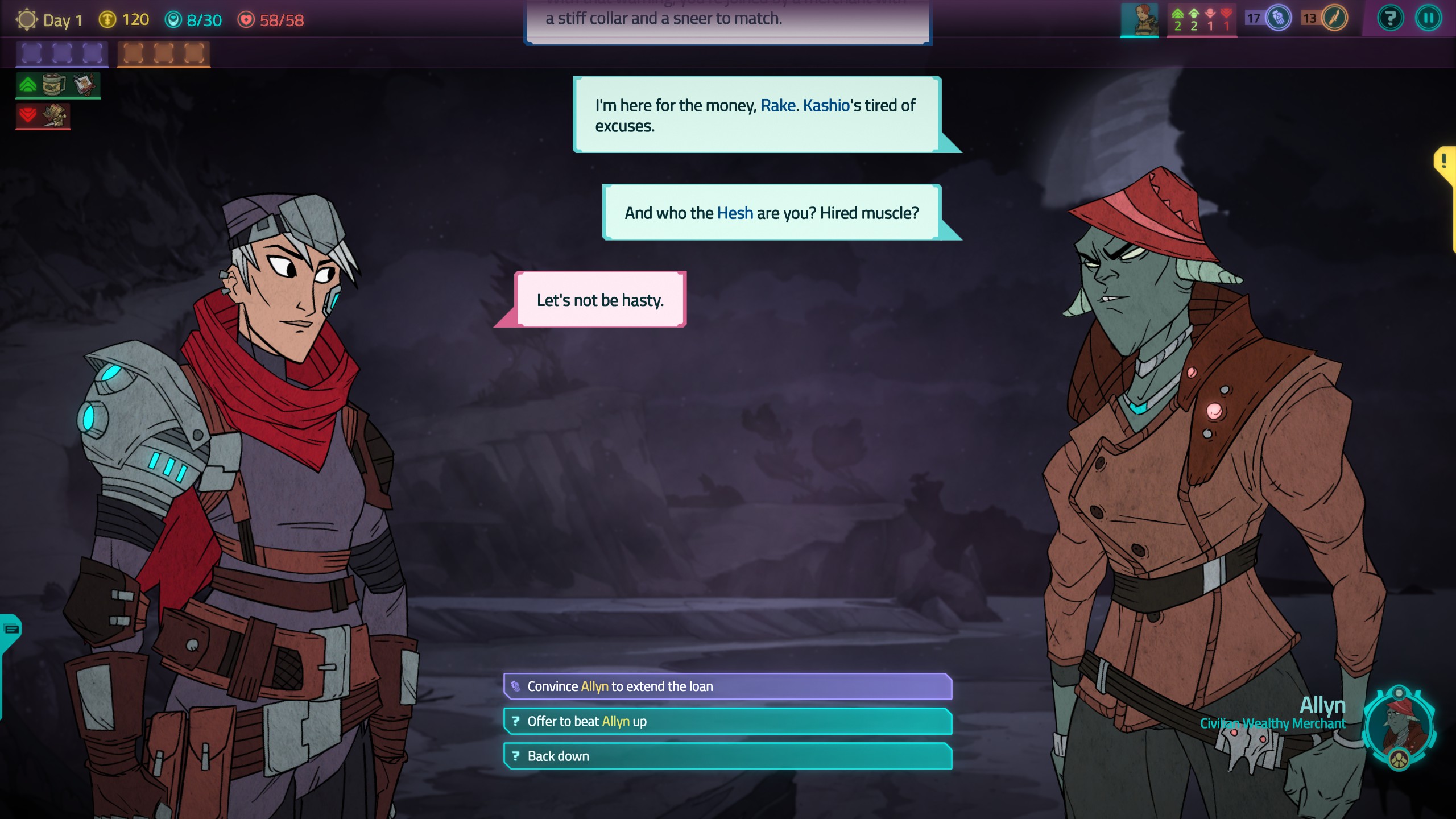 What Griftlands really needs is to somehow unify the dialogue and the negotiations, to make it actually look and feel characters are engaging in believable debate. I understand that what I’m asking for would be extremely difficult to implement, maybe even impossible. But this is essentially the experience that Griftlands strives towards. Crucial to the success of this is making arguments meaningfully different from a standard physical battle, which Griftlands ultimately fails to do.

This isn’t the only issue I have with Griftlands either. It’s the first Klei game I’ve played where I didn’t get on with the presentation. The gibberish language is part of the issue, but the art itself is a problem too. As I said, Griftlands’ world is a hodgepodge of sci-fi, fantasy, and post-apocalyptic themes, the result of which doesn't feel particularly cohesive. I’m not sure exactly where the fundamental problem lies, but I reckon the anthropomorphic animals is the point at which it steps too far. It feels incoherent, making it hard for me to become involved in the story. 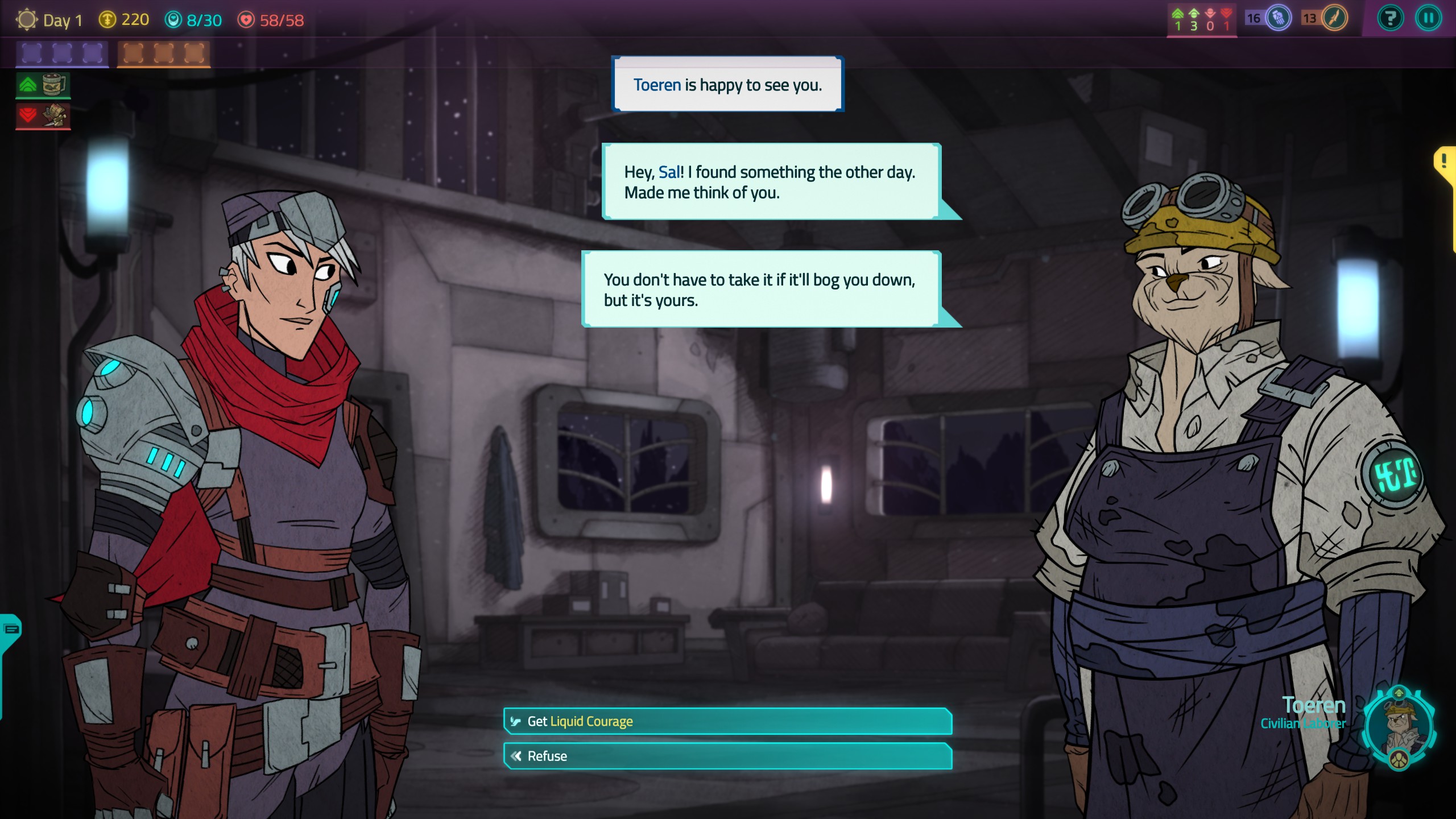 To be clear, Griftlands is by no means a terrible game. As a card battler it works well enough, both in the physical battles and the verbal ones. The story is great too, nuanced and human and with a surprising amount of flexibility in terms of choice and consequence. It’s particularly good at moving characters around, bringing them back into the story at surprising and interesting moments.

Yet this doesn’t change the fact that Griftlands' main idea doesn’t quite work, leaving us with a well made but otherwise unremarkable card battler. If you’re a fan of the genre, then you’ll probably have a great time with Griftlands, but it’s some way behind games like Slay the Spire and Monster Train and even Trials of Fire. In the end, Griftlands makes an interesting case for a conversation-based card battler. But ultimately, its confused argument and underdeveloped argument failed to persuade me.