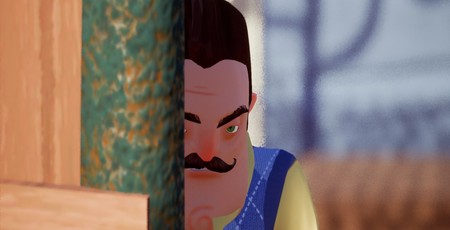 Hello Neighbor seems like my perfect game, a first-person stealth/horror experience featuring a single AI opponent who adapts to your behaviour, presented in a fantastically uncanny art style. It's rarely explicitly scary, and at times Hello Neighbor can even make you laugh, but the atmosphere can turn at a moment's notice, shifting instantly from humour to horror. It's like an animated episode of the dark comedy Inside No. 9, and that's neat. If I only had to review the paper design, Hello Neighbour would receive an Outstanding award. Sadly, in practice the game is often horrifying to play in all the wrong ways, suffering from a nightmare combination of clunky controls, obscure puzzle design, and an AI model that needs a far more deft hand to succeed.

Hello Neighbor plays over a sequence of three acts. In the first, you assume the role of a small boy who, while playing on the street, witnesses what appears to be a crime inside his neighbour's house. You need to sneak into the house and find a way down into the basement. To do this, you'll have to avoid the Neighbour, who is constantly wandering around the premises. At first, Hello Neighbor entrances with its gorgeous presentation and unique central mechanic. The Neighbor is a brilliantly drawn and highly capable opponent, a sort of halfway house between the stereotypical neighbour from hell, and the Xenomorph from Alien: Isolation (who perhaps would be the ultimate neighbour from hell). The Neighbor wanders around his house and gardens in a pattern of his own devising, doing exercises, watching the TV, sleeping on his bed, and generally seeming fairly innocuous, perhaps even a touch buffoonish. If he spots you, however, he'll suddenly turn aggressive, and chase you until either you find a place to hide or run back across the road. If he catches you, you'll respawn at the starting point, although your progress in the Act will remain intact.

The key difference between the Neighbour and Isolation's Xenomorph, however, is that the Neighbour adapts to your approach. If you enter the house by repeatedly breaking the same window, he'll eventually board it up. If you go through the front door, he might lay a bear-trap in front of it. Consequently, the longer you play, the more challenging the environments become to navigate, and the more devious the Neighbor becomes. It's a splendid idea, and for the first half-hour results in a tense and thrilling game of cat-and-mouse with your next-door nemesis. You'll smash through the bedroom window and crawl under the bed as the Neighbor comes dashing in to investigate, moustaches twitching as he tries to sniff you out. After a few minutes, he'll leave, and you'll emerge feeling nervous but deservedly smug. Then you'll sneak through the bedroom door, only to find that the Neighbor has placed a bucket filled with water on it. Blinded by the liquid, you'll stumble through the house, knocking over furniture and perhaps smashing another window, which will bring the Neighbour crashing back through the hallway. He'll grab your shoulders, pull you toward him, and as his face fills your vision, the screen cuts to black.

Even on this first level, the flaws are evident. The controls are very loose and spongy, with object collisions feeling particularly slippery. This is a real problem, as Hello Neighbour involves a lot of fairly precise platforming across uneven obstacles and picking up and manipulating objects in the world. The claymation-look of the world is great, but the environments also feel like they're made of clay, and that makes interactions feel very imprecise. Meanwhile, even here the puzzles are pretty tricky, with lots of red herrings and scarce logical connection between each step. The initial steps mainly involve finding keys, which is fair enough, but then you collect a Magnet which can attract metal objects from long distance. I spent ages trying to find what I needed to attract. And in the end, what I had to do was pull a key from another room via the space under the door, which I could only do by using the magnet while looking through the keyhole.

Still, the small environment and relatively short puzzle sequence means these flaws, if annoying, are bearable. But from Act 2 onwards, the nightmare becomes all too real. The house layouts from Act 2 onwards are much larger and less grounded in reality, while the puzzles become incredibly obscure. There's simply no internal logical regarding how the puzzles work. If they all followed the same format, i.e. finding keys or manipulating objects in the environment, that would be a start, but the puzzles in Act 2 are completely different to those in Act 1, and the game doesn't clue you in on that difference at all. Once you reach Act 3, the whole thing just becomes a massive headache. Let's not forget, you can't explore the house freely and experiment with solutions. While you're puzzle-solving, you're also having to evade the grasp of the Neighbor, who by this point is less like Alien's Xenomorph and more like System Shock 2's SHODAN. Somewhere around the end of Act 1 (depending on how many times you've failed), his intelligence skyrockets from relatively cunning to almost omniscient, and there's apparently no limit on how many traps he can lay. For example, at this higher level, the AI can plant security cameras that will alert him to your presence if they spot you. In one area, right at the start of a level, I might add, the scene looked like this: I was able to destroy the cameras through the fiddly process of picking up an object and throwing it at them. But each time I did this, the rotten little anti-Flanders would just rebuild them. Time after time I'd run this gauntlet, get spotted by another new camera, and then have to run back up the stairs and wait until he went away again. How on Earth are you supposed to deal with that?

It is possible to switch the neighbour to “Friendly” mode, which makes him slower and limits his traps to just buckets. But the problem isn't the types of traps he lays, it's the amount he is able to lay, and the power that provides him. It's actually quite a stark demonstration of why machine learning AI is so rarely used in games; it's so difficult to make it behave in a way that appears human. I really wish I could tell you that Hello Neighbor was great. It's smart and inventive and has all the right ingredients to excel. But the balance of everything is just off, and it amounts to an experience that is decidedly not enjoyable. With a tighter lead on the AI's power, some slicker controls, and puzzles that actually make sense in any other mind than the developer's, it'd be worthy of a recommendation if not more. Right now, however, if your neighbour invites you over to Christmas dinner, do yourself a favour and pretend that you're sick.