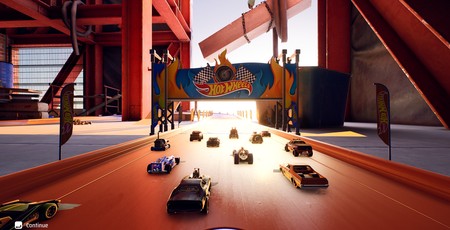 I'm bonnet-over-boot in love with Hot: Wheels Unleashed, one of the most exciting, imaginative, and hands-down fun arcade racers I've played in years. Milestone's game cherry-picks all the best bits from Trackmania, Burnout, and Micro Machines, carefully combining them into an experience that's wonderfully entertaining. There are a few areas where it could possibly be better, where it has good ideas but doesn't take them far enough. But that doesn't stop Hot Wheels unleashed from being a big plastic tub filled with die-cast joy. 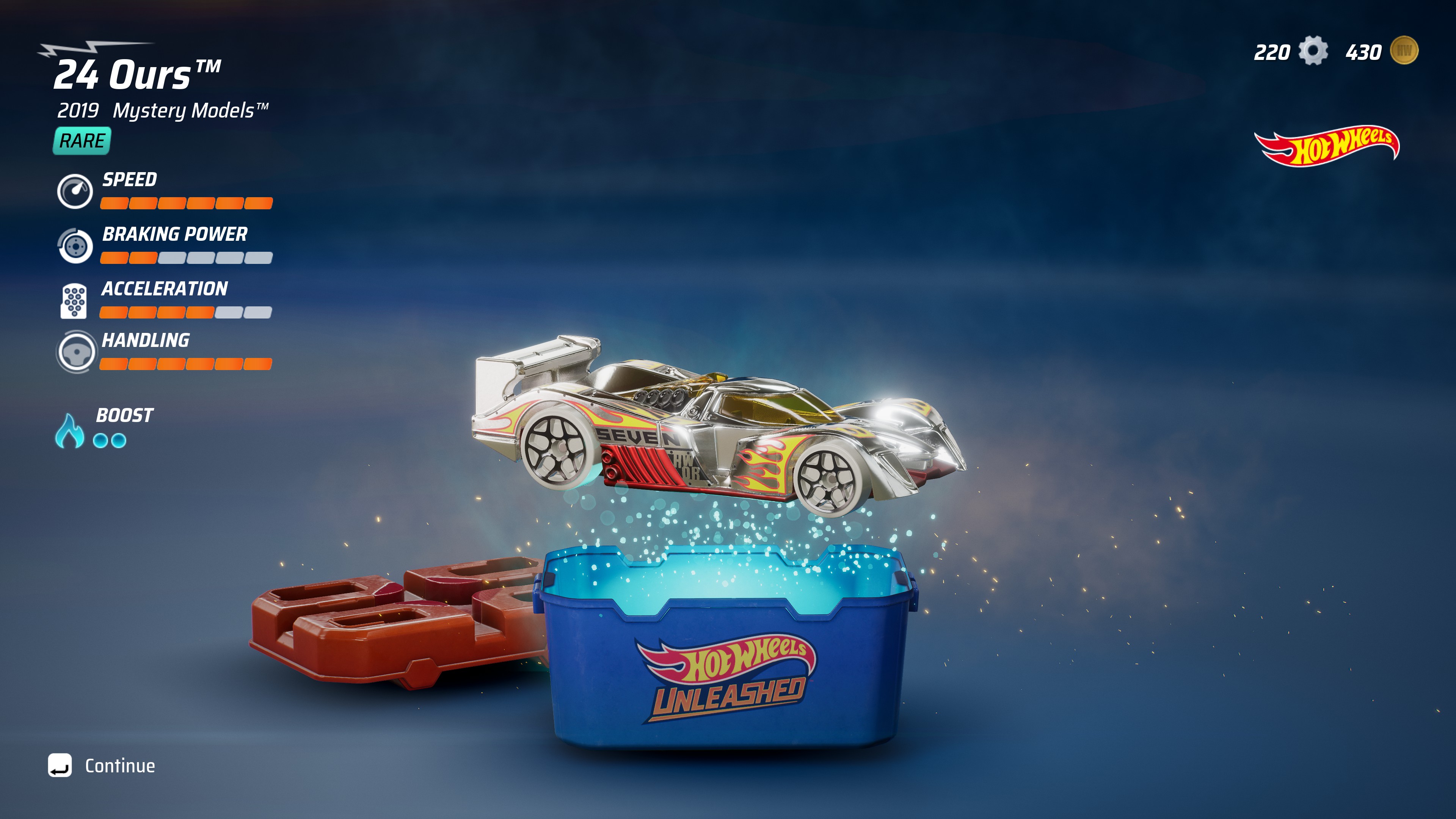 It doesn't get off to the best start, however. When you launch Hot Wheels: Unleashed, the first thing you see, before you've even pulled up at the main menu, is a loot box. These 'Blind Boxes' are a core part of the experience that, when acquired, reward you with random cars. The game is generous with these boxes, and they aren't the only way you can unlock cars in the game. Nonetheless, fronting the game with a loot box like this is both tasteless and misleading, making Hot Wheels: Unleashed appear more cynical than it actually is.

After this disconcerting intro, you're dropped into a quickfire tutorial race which should be the first thing you encounter, giving a proper demonstration of what Unleashed is about. Choosing one of three starting cars, you're dropping onto the recognisable orange-and-blue plastic of a Hot Wheels racetrack with 11 other vehicles, for three introductory laps around a vast, serpentine circuit built inside a Skate Park. 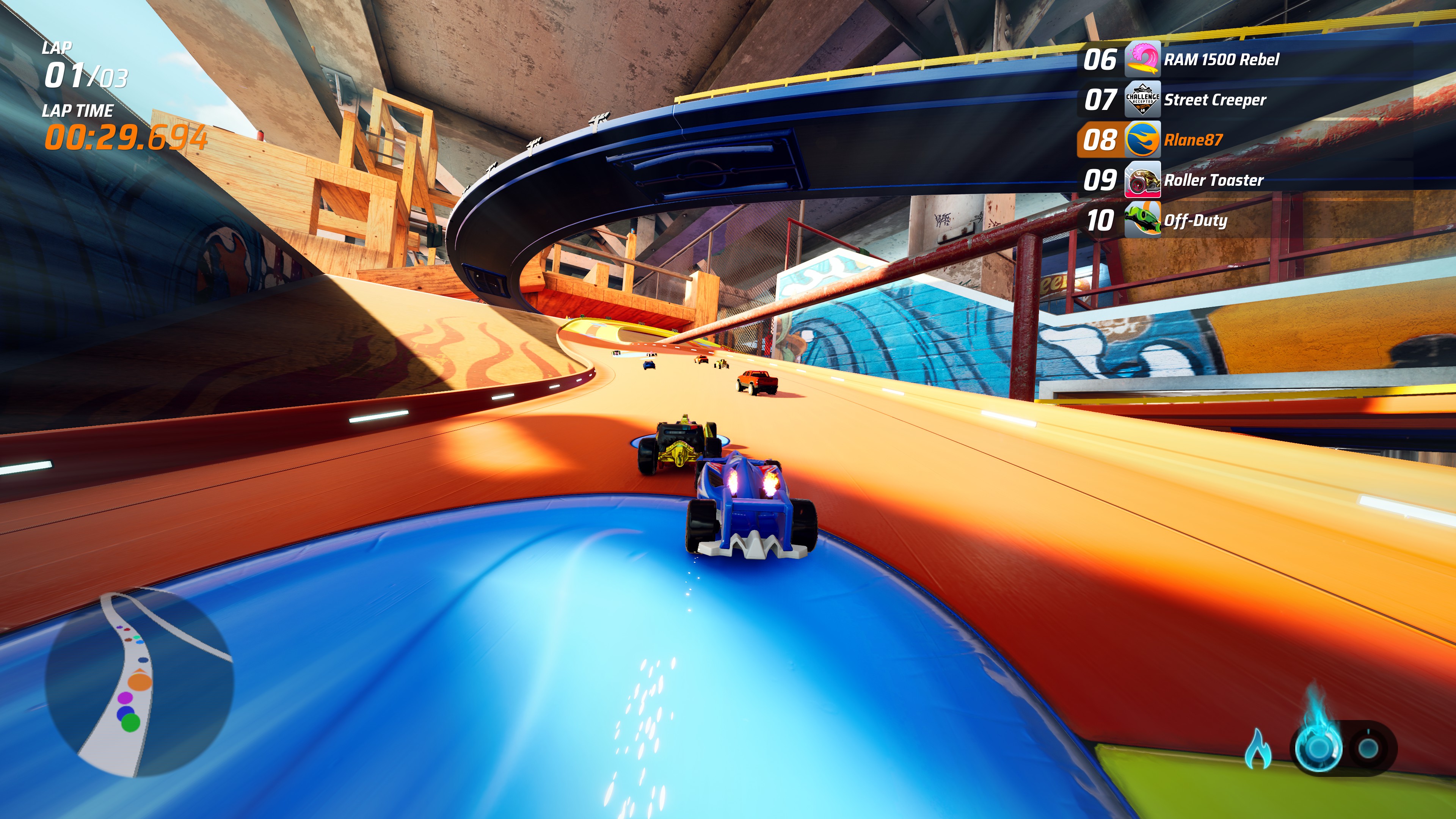 By the time you cross the finish line, you'll be fully acquainted with the basics. Unleashed's racing is instantly accessible and instantly enjoyable. Even the least aerodynamic of its 68 available cars is nippy and nimble, while the racing itself is less about precise handling, and more about maximising your Burnout-style boost, which propels you along the track like a zinc-alloy meteor. Boost refills slowly over time, but the process can be sped up by drifting through corners. The longer you drift, the bigger your boost, giving you a better chance of overtaking rivals.

The simple racing model is lent just enough complexity by the nuances of each car and track. All vehicles have different handling and boost capabilities. Faster, more race-oriented cars tend to have small boosts, while the more novelty cars have larger boosts to compensate for their slower speed and looser handling. So if you're the type of racer that tends to pinball off the barriers anyway, jumping into a rocket-propelled dustbin lorry might be to your advantage. 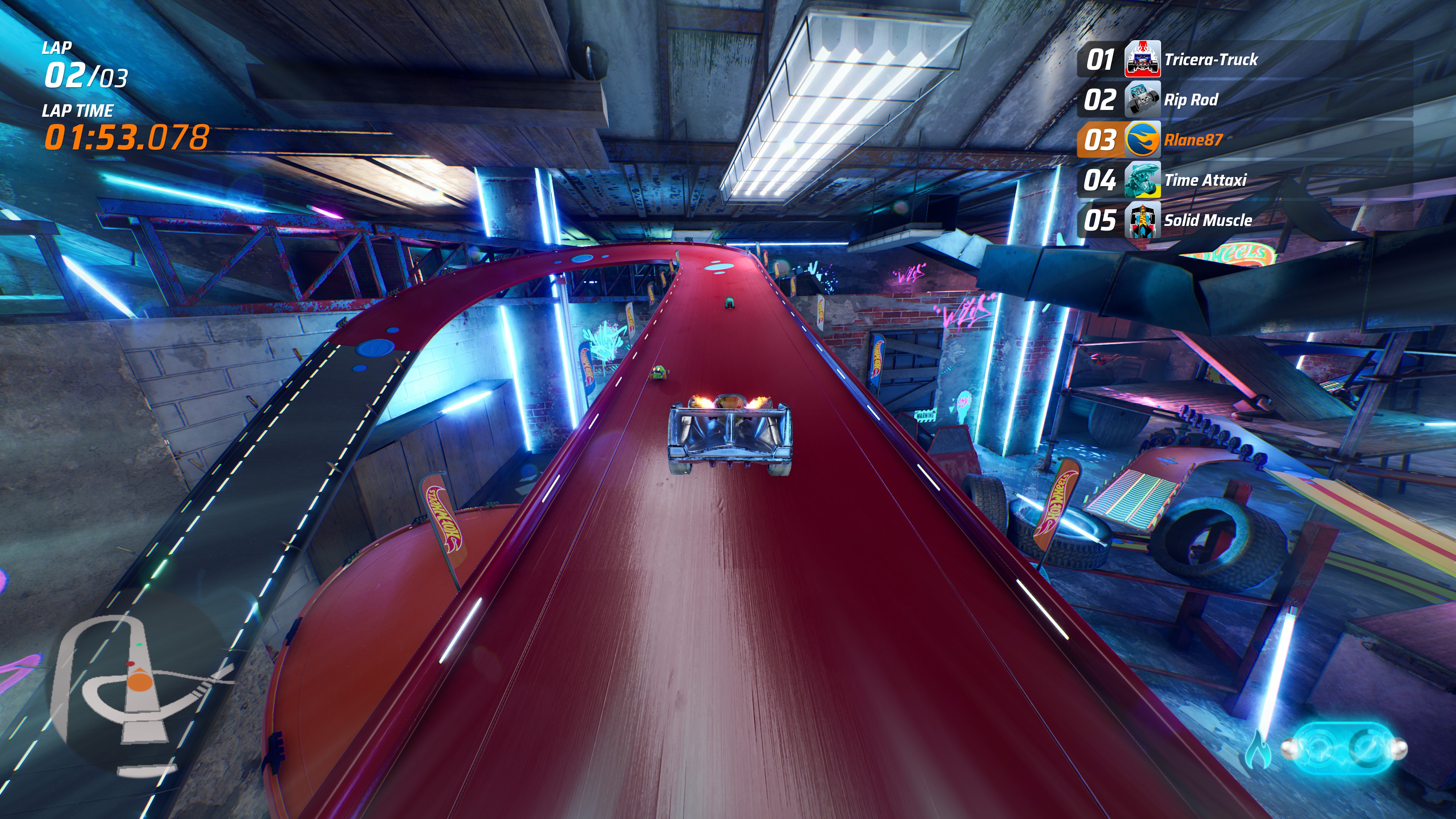 Meanwhile, tracks have various features that can both help and hinder your racing, ranging from on-track speed lanes and boost chargers to giant spiders that can entrap your vehicle in a sticky web. Gravity is often an important consideration. Most loops require boost to get through safely, while in some areas the barriers fall away, meaning a rogue drift can send you plummeting off the track.

All of this is presented wonderfully, too. Your vehicles are to-scale, with races taking place within various environments such as inside a basement or an in-construction skyscraper. Rather than your cars feeling small and dinky, however, it's everything around you that feels impossibly enormous, with highly detailed materials making your surroundings feel really solid and weighty. Driving beneath a pool table or a chest of drawers feels like racing through a tunnel cut into some giant mountain. The cars too, are meticulously textured to replicate that distinctive die-cast look, while the vehicle roster runs the gamut of Hot Wheels' history, with classic chevies and Formula 1 cars sitting alongside weird vehicles like the dinosaur-themed Motosaurus and Tricera-truck. 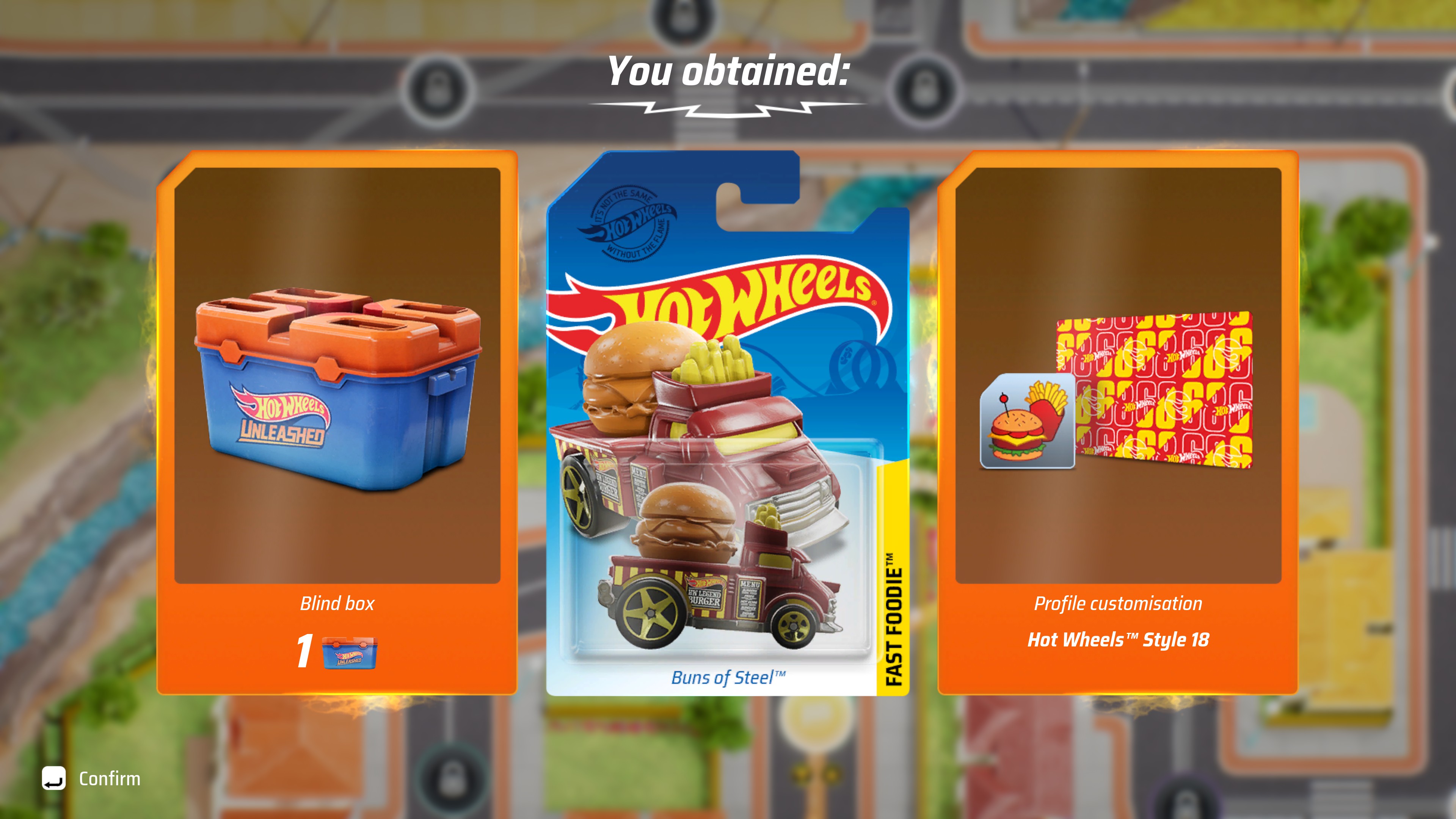 Unleashed's singleplayer is slightly unusual. Titled "Big City Rumble", it sees you exploring a top-down city map by moving between different "nodes". Each node is either a race, a time-attack challenge, a reward for exploration, or a secret that requires you to complete a certain race with a certain vehicle before it unlocks. Completing a race rewards you either with coins which you can use to buy new cars, or "gears" that can be used to upgrade vehicles you already own. While not particularly deep, the city layout is a neat way to lend some agency to your progression. Going down a side-street you know there's likely to be a new car at the end of is fun, especially since Hot Wheels' eclectic vehicles are so fun to collect.

While all the races are fun, the undoubted highlights of Big City Rumble are the "Boss" races. There are five of these, each of which is two or three times the length of a typical Unleashed race, and filled with unique gimmicks and hazards that make for a fantastic spectacle, whether it's pools of acid from a venomous scorpion that drains your boost meter, or rows of conveyor belts that alternate between speeding up your car and slowing it down. They're tons of fun, and just challenging enough to keep you focussed without being frustrating. 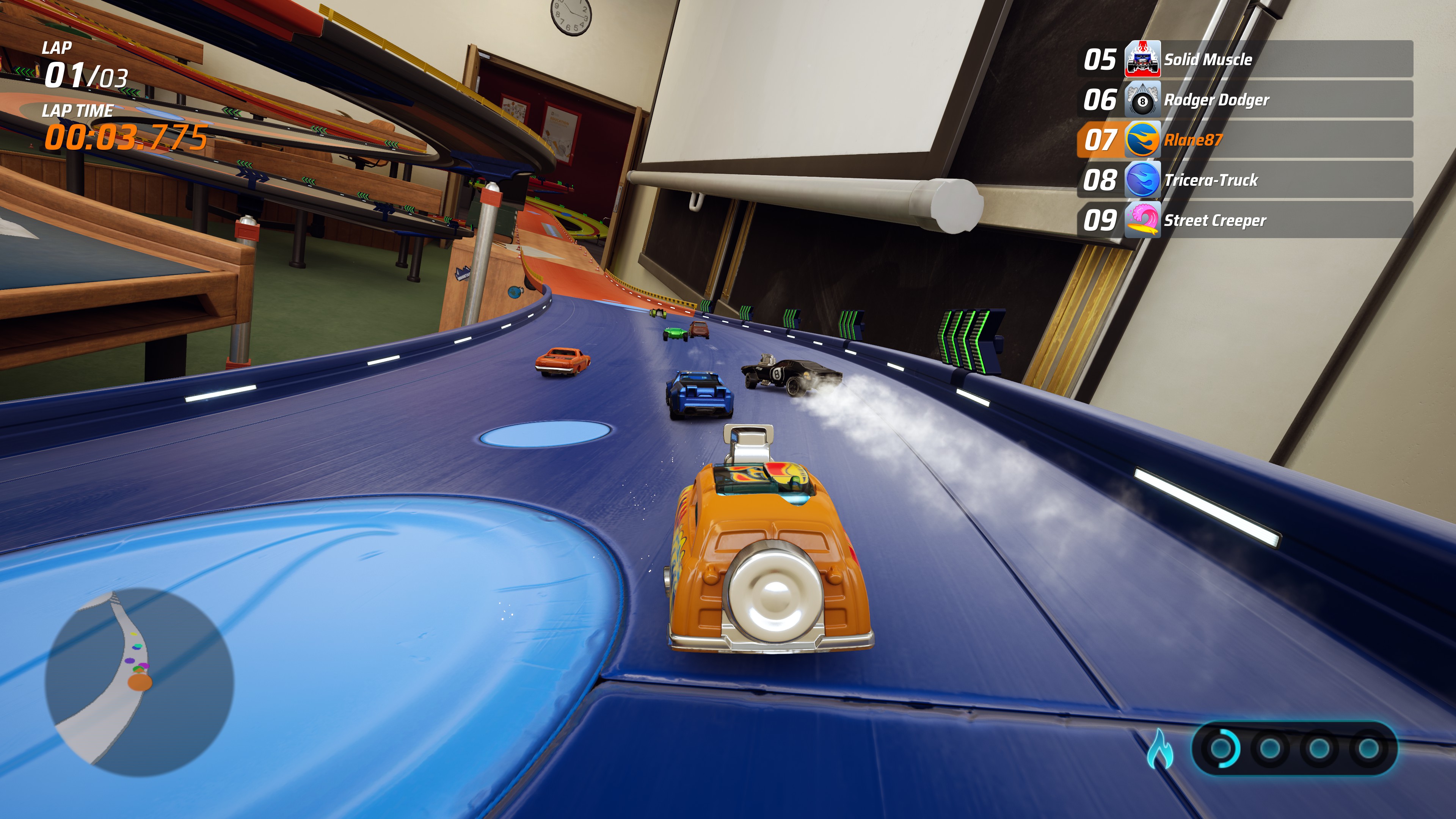 I like Hot Wheels: Unleashed a lot. Yet while the design is tight enough that the wheels never fall off it, there is a loose nut here and there. One of the bigger issues is that, although there's a wide variety of tracks, there are only five "arenas" in which those tracks appear, which makes Unleashed feel more repetitive than it actually is. Also, I wish there was a wider variety of hazards on track. The web-shooting spiders are brilliant, and I was hoping tracks would evolve with increasingly complex and eccentric obstacles. They do a little bit, but not enough, and it feels like a missed opportunity.

Multiplayer is a little anaemic features-wise too. The biggest issue is that there are no AI drivers in multiplayer, which means races can feel rather spartan unless you get a full complement of players. There are also no public serves, and no options or filters for matchmaking. These are fairly basic features for a modern racing game, and it may hurt Unleashed in the long run to go without them. 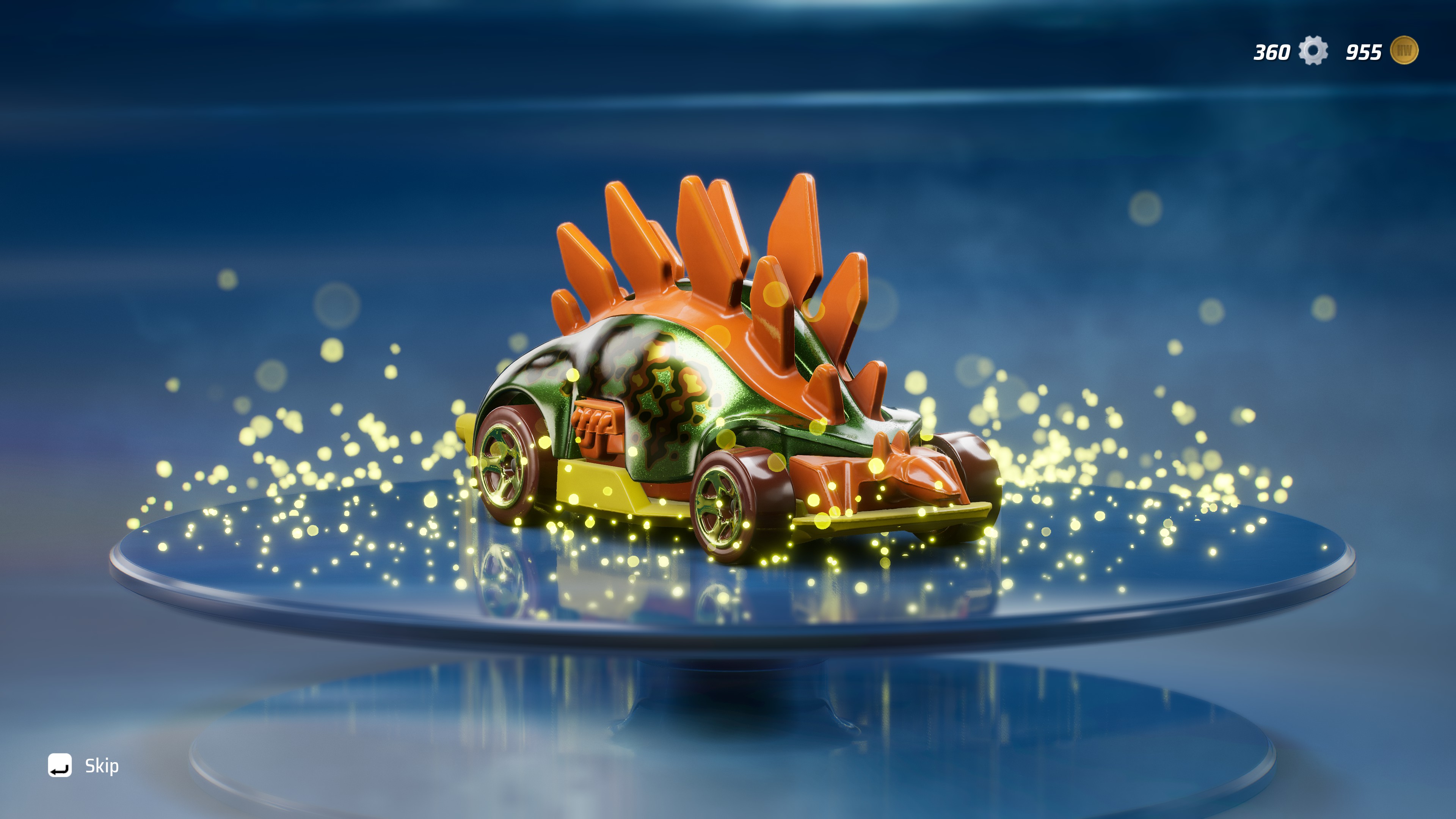 That said Unleashed appears to seek its longevity not so much from multiplayer, but from its track editor, which lets you build your own tracks and import those from other players. Frankly, I only tinkered with it a bit, as my focus was on the content that the game comes packaged with. But it is fun to mess around with, and more creatively minded players will no doubt have a blast building their own virtual Hot Wheels circuits.

Track editor or no, Hot Wheels: Unleashed is still a great little racer, easily the best arcade experience I've had since Forza Horizon 4. It isn't quite on the same level as Playground's masterpiece, lacking the scope and optional depth of that game. But there's more enough than enough here to please Hot Wheels fans, as well as lovers of Trackmania, Burnout, or Micro Machines. Not bad for a racing game about toy cars.