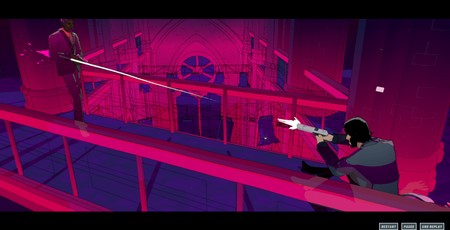 'John Wick as a strategy game?!', I exclaimed when I first heard about John Wick Hex. 'Absolutely ridiculous. What’s next, a South Park RPG? A Sonic the Hedgehog Kart Racer? A driving game set entirely in the main character’s comatose mind?'

I didn’t say this, of course. The manufactured offence you see above is merely a way into this review, a gap pried into the blank page through which I shall now pour words. Nonetheless, it’s fair to say that turn-based strategy isn’t the most obvious choice for a John Wick game. That would be a third-person, Max Payne style cover shooter, only with less monologuing and more grappling. Unusual as it may be, however, John Wick Hex works surprisingly well. As a distillation of turn-based strategy into fast-paced action, it’s a fascinating and frequently enjoyable game. That being said, it’s less successful as a John Wick experience, although that’s more down to some rough execution rather than a failure of concept.

Hex takes place some time before the films ('Before Helen' is the way Hex itself puts it). John’s two acquaintances from the Continental Hotel - Winston and Charon - have been kidnapped by a nefarious ganglord known as Hex. Not one to turn the other cheek unless it’s into someone else’s skull, Jonathan begins a one man crusade through New York’s seediest institutions. Although John Wick Hex is turn-based, it’s not structured in the same way that Civilisation is. It’s more of a hybrid of X-Com and Superhot, where the instances between turns are not years but fractions of a second. At the top of the screen is a timelime. Well, two timelines actually. One of them shows you the movement and actions of Baba Yaga himself, while the other highlights the movements and actions of visible enemies.

Every action in John Wick Hex takes a set amount of time. Moving from one Hex to another, for example, takes about 0.3 seconds, while firing a shot with the standard 9mm pistol takes around 1.2 seconds. When you trigger a movement or action in the game, the timeline will slide forward that number of seconds. The trick to succeeding in John Wick Hex is to ensure your actions are always a tenth of a second ahead of your enemies'. What this does, essentially, is allow the game to replicate the moment-to-moment decision making of any given John Wick action sequence in a way that the player can logically follow. It gives you the feeling of control and cold logic that action heroes so often exude, rather than either madly thrashing the buttons of an action game, or simply pressing F to watch an elaborate kill animation play out.

To give an example, let’s say there’s a Brawler, a basic melee goon, attacking you from your left, but there’s also a pistol-wielding henchman lining up a shot from further up the corridor in front of you. You only have time to take out one enemy. If you shoot the pistol guy, the Brawler will definitely hit you. If you kill the Brawler, the pistol guy might miss his shot, but he also might not. Each of these solutions carries the risk of taking damage. But there’s a third solution, which is to use John Wick’s 'Push' ability to grab the Brawler around the neck and shove him two paces to the left. This won’t kill him, but it will stun him. More importantly, it will get you out of the pistol guy’s line of fire, letting you then take out the Brawler in safety. This is the ever-shifting puzzle that John Wick Hex challenges you with, always trying to shave microseconds off your actions so that you’re always the first to attack and always safe at the end. After just an hour or so’s play, you quickly learn little tricks like crouching behind cover to break line of sight, or quickly stepping through a door and then retreating back, letting enemies come to you. Of course, enemy positions aren’t the only thing you have to consider, you also have to manage your ammo, finding time to pick up new guns when needed, and also to pause regularly to 'Refocus', refilling the bar that lets your perform rolls and special moves.

It’s surprising how well all this works to produce dynamic action sequences. In one level set in New York’s docklands, I threw my gun early on to knock the last chunk of health off a henchman trying to shoot me. I was then attacked by wave upon wave of Brawlers, resulting in an absolutely massive fight that had me relentlessly grappling and throwing punches, all while trying to pick up a submachine gun off the floor. By the time the fight ended, a small pile of ragdoll bodies had built up around me. A video of that fight can be seen below:

In fact, I recommend watching that video, because not only does it show what John Wick Hex does well, it also highlights the main problem the game suffers from. The core micro-strategy game Hex offers is compelling, but it’s frequently let down by presentation that’s at best a bit stiff and at worst downright shoddy. The art style itself is fine, making great use of cel-shaded colour and shadow. But the animation simply isn’t good enough to replicate the flow of a John Wick fight.

In fairness, the designers have managed to embody something of John Wick in their cel-shaded equivalent. I like the way John moves in this slightly crabbed position, and I particularly love the little shake of the head he does when he refocuses. But there’s not enough variety in the hand-to-hand moves, not enough punch or spectacle to the gunfights, and not enough “connection” between different moves. Even small changes would help, such as having John track enemies with his head when they appear, rather than staring into the middle-distance all the time. There are also a lot of visual glitches, from body parts clipping through scenery to animations not playing out properly. You see a lot of heads rolling loosely on necks after enemies have been killed, although to be fair, that could be because of John. I’m aware that this may seem like nitpicking, but the John Wick films are particularly known for the slick and stylish aesthetic, and the tiny details visible in the way John fights. Hence, a John Wick game really needs to get that right as well, regardless of what it’s doing mechanically.

One other issue, I wish the game evolved a little more across its breadth. The abilities you start out with are pretty much those you’ll end the game with, and there are certain elements of John Wick’s fighting style that it doesn’t represent, such as taking human shields, pushing enemies into one another, basically using their own strength and numbers against them. It makes sense not to overcomplicate the toolset so that players don’t get bogged down in an abundance of choice, but I think Hex is two or maybe three abilities short of being something truly special. Despite this, I am going to sling John Wick Hex a recommendation. While the final product isn’t as slick as I’d like, for £15 it offers a strategy game that’s not quite like anything else on the market, and it’s genuinely surprising how it manages to replicate the intensity of a gunfight through turn-based mechanics. If only it let you kill someone with a pencil... I’d make it my game of the year.