Lair of the Clockwork God Review 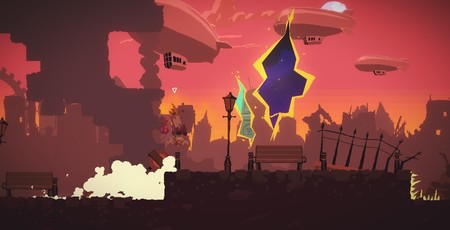 It took me ages to write this bloody introduction. Normally when reviewing games, I take screenshots of pretty vistas or cool action sequences, because that’s the stuff you want to see. With Lair of the Clockwork God, I took screenshots of all the jokes I liked. Consequently, every time I looked through my screenshots folder to find an ideal jumping-off point, I started laughing and lost my train of thought. Rubbish game 0/10. No, I would never be so callous. And to be fair, not all of those screenshots were of jokes. While Lair of the Clockwork God is funnier than watching Mister Blobby fall into an industrial paper shredder, the humour isn’t what makes it interesting. That would be its supremely clever blending of classic adventure game and modern indie platformer.

Lair of the Clockwork God is sort-of the third game in the “Dan and Ben” adventure game trilogy. I say “sort-of” because it’s a very different game from Ben There, Dan That! and Time Gentlemen Please, and you don’t need to have played those games to enjoy it (which is good because I haven’t). I have played Size Five’s excellent procedural crime caper The Swindle, which Lair of the Clockwork God also owes some of its DNA to. The plot notionally sees Dan and Ben (who are pixelated versions of the game’s own developers) trying to save the world from all of the apocalypses happening at once. Dinosaurs, aliens, giant robots. You name it, it's coming to eat your face. But it’s really about them teaching a giant CRT monitor how to have emotions by experiencing those feelings themselves in a virtual reality simulation.

If you’re confused at this point, good, that means your brain works. It all makes sense once you get into it. Or rather, it doesn’t, but by that point you’ve already searched through the jungle for a flower that cures cancer, so saving the world by teaching a TV how to cry isn’t that much of a leap. Ultimately, all you need to know to understand Clockwork God is this: Ben is steadfastly a classic adventure game protagonist, while Dan wants to solve all the world’s problems by jumping. I would say that you’ve got two separate games happening at once. But that’s Clockwork God’s real trick. You haven’t. Both sides of the game (mostly) coexist in the same space. You’re able to switch seamlessly between the two characters at any point, moving Ben around and interacting with objects via a traditional “Look At”, “Pick-Up” “Talk-to” adventure game control scheme, then switching over to Dan to do some fast-paced leaping around. The ease with which Clockwork God flits between the two is highly impressive. I know it’s dreadfully boring to talk about how good a game’s UI is, like talking about the quality of the binding on a book you’ve just read, but Clockwork God’s dynamic UI is superbly designed, and is the lynchpin in making the game feel like a single entity.

Clockwork God deploys this genre-blending concept in aid of two key goals: 1) Dumb jokes and 2) Clever puzzles. Let’s talk about the second one first, because I enjoy being contrary. Most of Clockwork God’s puzzles involve combining the two character’s abilities to solve any given problem. An early example requires Ben to flip a switch to open a door. But the switch is up on a platform that Ben can’t reach. So first you need Dan to jump up there and stand on a pressure plate. This raises another platform from Ben’s current position, letting him walk over to the switch and open the door. Obviously, the puzzles come in much more elaborate forms than this, and some of them will test your lateral thinking like a MENSA puzzle stapled to the arse of a bull. There’s a meta-puzzle during the “Feeling Old” chapter of the game that had me stumped for ages. The mechanical symbiosis between Dan and Ben blossoms in some interesting ways too. For example, any platforming upgrades Dan requires first have to be “crafted” by Ben from objects in the world. One of these enables Dan to carry Ben on his back, which makes traversing levels a whole lot easier. The way the game gives a sense of character progression without simply making itself easier is extremely well thought out.

All the while, Clockwork God is throwing jokes your way like a squealing child lobbing chunks of bread into a duckpond. Size Five take loving aim at both creaky old adventure games and high-minded indie platformers alike. The very first puzzle involves pushing an indie game developer onto a bed of spikes in order to create a new platform, in what I’m assuming is a metaphor for crunch culture. Shortly afterward, Ben nicks his boots for a character upgrade. “Three minutes in and you’re stealing shoes off a dead man,” Dan laments. My favourite joke drops when Ben visits the afterlife for platform game protagonists, where he meets a character whose platforming gimmick is absorbing things into his watery body. “How did you die?” Ben asks. “Absorbed a sponge,” responds the character. Clockwork God doesn’t have any serious issues. The pixel art is bright and breezy and the audio design is superb, including a brilliant chiptune riff on Sonic’s Green Hill Zone theme My only real criticism is Clockwork God is a better adventure game than it is a platformer. That’s not to say it’s a bad platformer. It’s fine, but even gravity that goes left can’t mask that it is extremely rote.

Even in its weaker moments, Clockwork God is never more than a few seconds away from lobbing you a daft quip that makes you instantly forgive it. But what I like most about the game is that beneath all the silly humour and patently ridiculous situations, Clockwork God has genuine themes and concerns that it wants to explore. The whole game is one long discussion about the challenge of staying relevant as ageing gamedevs in an increasingly crowded and fast-moving indie scene. Ben approaches this in full grumpy old man mode, refusing to change at all, while Dan is the “How do you do, fellow kids?” meme in pixelized form, futilely trying to recapture his youth by adopting a style that simply isn’t his. Individually they’re about as relevant as a floppy drive. But by combining their individual viewpoints and skillsets, they end up creating something a little bit special.