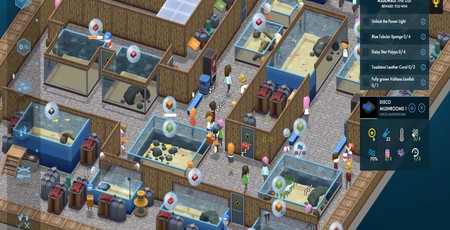 I came into Megaquarium with tempered expectations. I quite like aquariums, but there’s only so long I can stare at various kinds of fish through various kinds of glass for before getting a bit bored. Also, having just reviewed Two Point Hospital, which is the best management sim in years, I thought there was no way Megaquarium could possibly match its lofty highs. And it doesn’t, but not because Megaquarium does anything wrong. It’s because it’s not trying to be the same kind of game. Two Point Hospital is basically a clown wearing a white coat. It’s goofy and daft and makes an obvious (and entirely successful) effort to entertain you. Megaquarium is more like a popular scientist giving a lecture. It’s not going to have you in fits of raucous laughter, but it holds your attention through being consistently interesting.

You can experience Megaquarium in two ways. There’s a 10-mission campaign instructing you on the fundamentals of…ah….aquarianism…? aquaology…? Oh I don’t know, looking after your fish zoo. There’s also a sandbox mode that lets you build whatever you like, but it’s probably wise to play through at least some of the campaign first. There’s more to aquariuming… um…fish maintenance than chucking them in a big glass pond and charging the public £15 a pop to gawp at them. While Two Point Hospital is the most immediate point of comparison, in practice Megaquarium more closely resembles Jurassic World Evolution. The 100 fish species available in the game all have different and often contrasting needs. Initially, you won’t have to worry about this too much. All you need to do is place a tank, ensure it’s connected to a water filter and a heat generator, and then drop some fish in it. You’ll also need to ensure there’s a nearby food dispensary, then hire an assistant to actually feed the fish and maintain the machinery. So long as you don’t overfill the tank with fish and compromise the water quality, you’ll be fine.

As you progress deeper into the game, however, the variety of aquatic life increases, at which point designing your Aquarium becomes a fascinating puzzle. Rather than being placid little water babies, it turns out fish are vicious little gits who will fight to the death over anything. Some can’t be kept with other members of their species, while others will fight any other fish from their entire genus. Larger fish tend to eat smaller fish, while some prefer to crunch on any crustaceans you place in the tank. Some fish are outright labelled as 'Bullies' and will harass any other fish that have the endearingly pathetic 'Wimp' trait. Even if you successfully prevent your fish from fighting, that won’t necessarily stop them from dying. As well as needing a certain water quality, water temperate, and food type, some fish also have more specific considerations, like whether they like to live in vegetation, a cave, or amongst a shoal of their own species. Many fish, such as Moray Eels and Lionfish, grow over time and may need transferring to a larger tank once they hit a certain size. This is particularly important if you have other smaller fish in the tank, because otherwise you might suddenly find that your lionfish is suspiciously alone.

It isn’t just the fish you have to look after either; the people in your aquarium need to be catered for too. You’ll need to provide vending machines for refreshment, toilets for relief, and waste bins for recycling. One peculiar but effective quirk of Megaquarium is that aquarium-goers…aquarium enthusiasts…oh for God’s sake - fish fans don’t enjoy seeing how the magic is done, meaning you need to keep all your filters and such hidden from view behind walls. It seems slightly snobby - but it makes you think much harder about how to plan your aquarium, how to line-up tanks so that you can fit all the machinery behind them, where to place pumps so that they can reach your open-display tanks in the middle of the aquarium floor.

As with Two Point Hospital, the developers of Megaquarium have thought long and hard about how to keep the player engaged for longer than a few hours. The game delivers a constant stream of new fish and equipment over time, which you unlock by accruing Science Points and Ecology Points by stocking specific fish. There’s also fun to be had in figuring out different combinations of fish in particular tanks, trying to maximise the use of that one tank without accidentally triggering a maritime massacre. All told, Megaquarium is a neatly assembled management sim, albeit one that drops a scale or two. The presentation is fine, but could be better. Visually the game’s a bit dull, and I particularly dislike the bobble-headed human characters. The developers have clearly put most of their visual attention into the fish, which is the correct approach, but it does mean that the people wandering around your aquarium look all the more ridiculous.

Another problem is that developing your aquarium, while fun overall, can be a fiddly process. Because your visitors don’t like to see behind the scenes, I often felt the need to pause the game whenever I was expanding and adding new tanks, which is basically all the time. This slows your progress significantly, especially if you’re waiting on research projects to complete. I admit that this might be more down to me than the game, but there are more concrete annoyances too, such as having to remove wall tiles before placing doors, having to manually shift any visitor who gets behind the scenes, and being forced to delete walls on a tile-by-tile basis. Lastly, there are a few managerial areas where Megaquarium falls short. You can’t issue specific orders to your staff; you can only cancel an order they’re currently working on. At one point I discovered a coral that hadn’t been fed in five days, but couldn’t actually tell a staff member to prioritise that job. Incidentally, Megaquarium isn’t very good at flagging up such issues, offering visual cues but no audio cues. If you’re focussed on a job elsewhere, you could end up overlooking a problem that leads to the death of a fish.

While these shortcomings can be annoying, none of them come close to being deal-breakers. Meanwhile, Megaquarium buys back any lost goodwill through its ability to let you wander through your Aquarium Dungeon Keeper style, which adds hugely to the experience by letting you see your aquatic attractions up close. Megaquarium may not possess the sleek lines and slapstick appeal of Two Point Hospital, but it has more than enough charm and smarts to forge its own way to success.