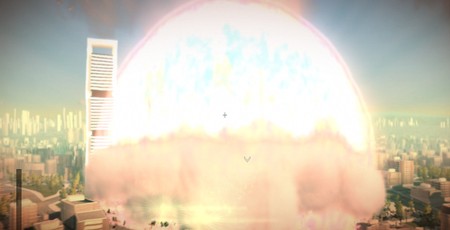 Megaton Rainfall begins with God teaching you how to fly. You awaken in the cold void of space, where a point of light explains in a booming voice that you have been granted superhuman powers. Then the light shoots off into the distance, beckoning you to follow. You propel yourself through the darkness, and punch through the atmosphere of Earth. With a rousing electronic soundtrack pulsing in your ears, you swoop across oceans, over undulating landscapes, and weave between the skyscrapers of sprawling human cities. Then you arc upwards, pushing back out into space. and turn to face the dark side of the Earth. Its curvature gleams silver like a blade's edge as the light of the sun illuminates it from behind. After giving you your flying lesson, God (or whatever the supernatural being who guides you on your journey is called) informs you that all is not well in the Universe. A race of aliens has arrived on Earth with the intent of destroying human civilisation, and it's up to you to stop them using a range of devastating powers. The meat of Megaton Rainfall involves flying between cities around the globe, attempting to eradicate the alien presence while minimising human casualties. Initially, this experience is as fun as it is breathtaking. Simply flying from point to point engenders a wonderful feeling of freedom and power. The cities you fight over are algorithmically generated and for the most part look fairly similar, but each is given a sprinkling of personality in the form of unique landmarks, such as the Houses of Parliament in London or the Sydney Opera House in, well, Sydney.

Where the cities really impress, however, is in their destructibility. The aliens have a wide range of strange and powerful ship types at their disposal, and even the most basic is capable of turning an entire skyscraper into a smoking heap of rubble and glass. These include stomping tripods that can peel a building like a banana, and giant robotic worms that like to burrow through commercial centres. More powerful opponents include bombers shaped like Tunnocks' teacakes that can deploy nuclear devices, and gigantic motherships which can raze entire cities with their apocalyptic heat-rays. Your own abilities make you more than a match for these dastardly extraterrestrials. Your basic attack is a quick-fire energy blast that will soon eat through the hull of most alien spacecraft. More powerful abilities are available in the form of an energy beam, the ability to stop time, and the almighty 'Graviton Bomb', which the game instructs you to only ever fire upwards, as it can flatten an entire city.

Indeed, it's in your own powers where Megaton Rainfall finds its mechanical tension. Being essentially a cross between Superman and the Son of God, you're effectively immortal. But the people you're trying to protect can die, and frequently do, in their dozens. The game will only allow so many civilian casualties before reverting to the most recent checkpoint. Consequently, you need to time your attacks carefully to do the maximum damage to the aliens while minimising human deaths. As it turns out, this is pretty tricky. Even your basic attack can level a skyscraper, while many of the alien craft are highly nimble, and can sustain a significant amount of damage unless you target specific areas of the craft (which are highlighted in red). Hence you'll often find yourself weaving through walls of skyscrapers on the tail of an alien ship, hoping you can land a killing shot in before it latches itself onto another building and annihilates another twenty people.

For its first hour or so, Megaton Rainfall is brilliant. Figuring out how to defeat each new alien craft and watching them shatter into a thousand pieces when you do so is an amazing feeling. Meanwhile, the game keeps you invested with a gradual drip-feed of new powers. After that initial hour, however, the enjoyment drops off considerably. As the missions become more difficult, that central tension begins to shift from being challenging to feeling restrictive. The problem is Megaton Rainfall doesn't allow the player to fully explore their own incredible destructive capability. A handful of mistimed attacks can catapult you back to the last checkpoint. It's little surprise that one of the most requested features from the community is a “villain mode” that would let you explore the full potential of your abilities without being constantly punished for it.

But Megaton Rainfall's biggest issue is its unrealised potential. After a few missions, it turns out that the game's environments aren't simply limited to Earth. In fact, there's a whole galaxy of stars and planets to explore, including our own solar system and thousands of extrasolar bodies beyond. Yet aside from one set of side-missions that provide insight into your own character's backstory, there's absolutely no reason to venture beyond Earth's atmosphere. The game even explicitly states that there are only two sentient races in the entire Universe and that you'll find nothing but barren planets any farther afield. It makes No Man's Sky look positively chock-full of content (although to be fair, No Man's Sky has a fairly impressive range of features now). Megaton Rainfall misses a trick here. The wider universe could allow you the ability to go on the offensive, to track down the alien home planet(s) and unleash your full destructive capabilities upon them. There are some other issues too, primarily the current absence of PC VR support. Right now the VR version is a timed exclusive for PlayStation, so it will be coming to PC eventually. Yet given that Megaton Rainfall was designed as a VR game from the start, to release on PC without that capability rather than waiting until the exclusive ends seems bizarre to me.

Ultimately, Megaton Rainfall resembles an awesome tech demo that needed another year of development to become the game it has the potential to be. As it stands, it's a little too brief and barebones for me to recommend outright, even considering its modest price. That said, it is still capable of producing wondrous and thrilling moments, and provided you don't mind its largely empty universe and relatively fleeting running time, there are plenty of worse things you could chuck a tenner at.