Metro 2033’s decision to tell a very specific storyline has led to the creation of a heavily-scripted and very linear game. You could even say that it’s…on rails, yeah?

To those of you still wanting a direct STALKER comparison that structure is going to be one of the most important differences between the two, so it’s worth spelling out. Metro 2033 is a level-based game, not an open-world. In STALKER you can roam freely, exploring ruins and stumbling across unique encounters or gathering quests. In Metro 2033 you can’t; one level leads directly to the next.

That’s both a blessing and a curse for Metro 2033 because while it definitely facilitates storytelling and the sense of claustrophobia to a certain degree, it does limit the gameplay. The majority of the action is set in very simple, dark tunnels – locations that often aren’t actually fun to fight in and don’t offer much variation or chance for exploring.

You want more money, of course I don't mind, to buy nuclear textbooks for atomic crimes
Not that all the game takes place in the tunnels though. There are occasional trips to the surface, allowing you to take in the scenery of nuclear winter, but even there you’re unable to veer from the correct path if you want to proceed – and the time you can spend looking around is hampered by your reliance on your gasmask, which degrades in real-time. If you’re running low on filters then excursions to the surface can be brilliantly tense as you race through the rubble, desperate for shelter.

To get new gasmask filters you’ll usually need to buy them with bullets, which function as both your primary defence and your cash. Ammo is the most precious part of the Metro economy and is divided into two types. There’re post and pre-war rounds, the latter of which is most valuable and which also gives you a damage bonus should you run out of other ammo. It’s also very rare though, with homemade rounds being the predominant part of your arsenal.

The idea of using bullets as both your ammo and your money is a brilliant one when it comes to conjuring an extra dimension to the story and economy. It hammers home the fact that humanity is on the edge, while also creating some interesting new decisions for players – will you trade in all your pistol ammo for a sniper rifle? Is it better to have good guns and few shots or do less damage but carry an extra bandolier?

Unfortunately though, while the idea is good on paper it doesn’t hold up as well in actual use. As you delve further into the game you start tripping over bullets, gasmasks and medpacks at every turn, diminishing the sense of scarcity and the value of upgrades. Weapons are prohibitively expensive and battles are often of a scale and difficulty that you’ll soon learn to keep your bullets for use, rather than trade. You can always pick up new weapons along the way, anyway.

It's an anomaly!
It’s the combat which is possibly Metro 2033’s weakest point, for a number of reasons – the main one being that of the two main types of enemies, humans and mutants, neither are much fun to fight.

For mutants the enjoyment is sapped out mainly because of schizophrenic pacing. There are long stretches where nothing happens save for repeated NPC warnings that mutants might be about - which they then do in huge numbers, quickly swamping you and forcing you to dodge while you reload. It’s a rhythm which quickly gets tiresome; you’re basically fighting 20 dogs in a pitch black tunnel where there’s no room to evade and even the weakest foes can soak up an impressive amount of damage. Occasionally they’ll latch on to you and you have to hammer ‘E’ to push them off. Yawn.

Humans meanwhile have a slightly different set of problems and, contrary to what the majority seem to think, we’re not sure that it’s the AI that’s solely to blame – we think the level design is also at fault. Metro tunnels are an awkward place for a shootout at the best of times; if there’s no cover then it’s boring, but the moment you put boxes and walls in then you start reducing the available playspace. Flanking is mostly impossible, while careful sniping is about as useful as farting and hoping to suffocate your foes.

Enemies do try to move around when they have the chance, but at the end of the day they all have lights on their heads and you’re carrying a shotgun – though that doesn’t stop them from killing you every now and then. The difficulty curve really is all over the place. 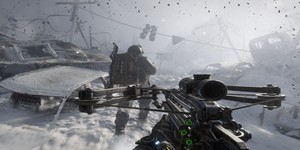