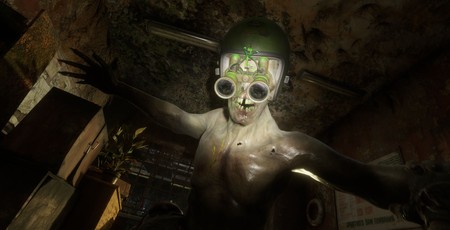 As expansions go, Sam’s Story can’t be faulted for quantity. It adds another of Exodus’ massive open maps to the game, plus a whole bunch of smaller areas for you to explore. It’s for all intents and purposes another Metro game, closer in spirit to a spinoff than an expansion. Quantity isn’t the same as quality, however, and here Sam’s Story is a little less reliable. Don’t get me wrong, it largely succeeds in the areas where Metro Exodus also excelled. But it is slightly rougher around the edges. As for the areas where Exodus was less good, unfortunately Sam’s Story exacerbates the problems to the point where they’re almost unbearable.

You’ll be shocked to hear that Sam’s Story revolves around Sam, the American marine who accompanied Artyom and his companions on the cross-country train-ride of Exodus. Sam’s Story place after the end of that game, as Sam departs the group to find a way back to America. Eventually, Sam arrives in Vladivostok, where he finds another American named Tom who has taken control of a nuclear submarine. Tom agrees to take Sam to the US, on the condition Sam can acquire the fuel rods needed to power the sub’s reactor. These are in the possession of the sub’s former captain, who is hiding out somewhere in the ruins of Vladivostok.

In structure, Sam’s Story is like a reduced-down version of Metro Exodus. The game is book-ended by lengthy linear sequences that introduce and then conclude the story, while the middle of the game offers a large, semi-open environment for you to poke around. You’re not entirely free to roam this space – there’s a direction that you ultimately have to go in, but it has enough breadth to it that it provides the sensation of being free to go where you will. Vladivostok itself is another majestic bit of environment design from 4A. The coastal city has been obliterated by a tsunami, transforming it into an urban wetland where concrete tower blocks must be accessed by boat, and great rickety bridges have been built across the newly developed swamps prowled by the game’s mutants. In an abandoned fire-station, local bandits have developed a cottage industry capturing and selling the local mutants, while the submarine station is blockaded off due to its high levels of radioactivity.

Sam’s Story doesn’t give you quite the same impetus to explore as Exodus. There’s only one side quest in the DLC, while the survival mechanics introduced in Exodus don’t get the same room to breathe here. You’ll be perilously short of ammo at the start, but once you reach the main open area, you won’t go short unless you’re completely careless. That said, you probably won’t need much of a reason to explore, as the game’s sheer commitment to detail and atmosphere entices you to investigate every nook and cranny. In a flooded school I stumbled upon the music room where the ghostly plinking of a piano could still be heard in the air. Later on, I had to shelter in a building filled with monsters as a radioactive rainstorm passed overhead. You won’t use your gasmask as much as you did in Exodus. Sam’s story saves it for one specific, heart-stoppingly tense section of the game. All of this is great. As I said, though, there are some obvious rough edges. Inaccessible areas are rather coarsely blocked with piles of detritus, and sometimes invisible walls. The human AI is also rather hit and miss. Enemies never seem to try to flush you out of your position, so it’s easy to pick them off from a distance with a scoped rifle. There are also several annoying boss battles against a giant bat-creature. These encounters go on for far too long, with you spending most of the time waiting for the boss to complete its animation cycle so you can shoot it.

The biggest problem in Sam’s Story is the writing. Now, Metro Exodus’ writing wasn’t exactly stellar. But here the script is downright dreadful. As I mentioned, the story centres around two American characters, but they’ve been written by someone who seems to only have a passing idea of how Americans talk. Obviously 4A is a Ukrainian company, and I’m sure American creatives have done some dreadful representations of Ukrainians in the past. But that doesn’t alter the fact that the writing is appalling. There’s a scene in which Sam and Tom talk about their favourite baseball teams, and it is one of the most cringe-inducing exchanges of dialogue I’ve seen from a big-budget game in years. It wouldn’t be so much of a problem if there wasn’t quite so much dialogue. But like Exodus before it, Sam’s Story is obsessed with the sound of its own, terrible voice. Most of the opening act involves sitting around being talked at, as the cast exposit every tiny fragment of the plot. At times it shifts from being bad into being downright weird. In one scene, Sam spends the night drinking with the old Captain of the nuclear sub, and it’s literally about ten minutes of them doing stupid drunk nonsense. I’ll admit that one specific moment in this scene made me laugh, but I would have much preferred to get on with the game.

I wish the Metro games allowed you to play them in Russian or Ukrainian with subtitles, because the English localisation is like a bad dub, and it pulls you out of what is otherwise a meticulously crafted world. I know complaining about story in first-person shooters is like complaining about the coffee in a petrol station, but the Metro games are heavily story centric, and it isn’t possible to simply ignore it. Still, despite the wince-inducing dialogue, Sam’s Story is a decent extra chunk of Metro adventuring, and one that I’m glad I took the time to play. The actual story may be rubbish, but  I’m willing to put up with it for more moments of wandering through 4A games’ beautifully-destroyed vistas.