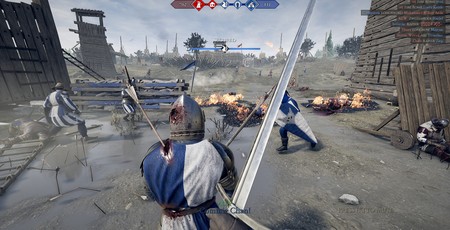 If there’s one thing Mordhau has emphasised for me, it’s the significance of horses in medieval warfare. I already knew about the significance of horses in medieval warfare, of course. I’ve read about it, I’ve watched films about it, and I’ve played more hours of Total War that I’d like to admit. But I’ve not had it demonstrated to me quite like the way Mordhau does it. I think this comes down to scale. I’ve seen cavalry charges demonstrated in various kinds of fiction. But my brain struggles to comprehend the physicality of things represented at that scale. In Mordhau’s Frontlines mode, however, each team only gets two horses, and they rarely work together. Seeing one horse cut thundering toward you from a distance, before cutting through the melee you’re embroiled in like an axe through a skull, is perhaps Mordhau’s greatest 'Oh sh*t!' moment.

Hmm. On second thought, perhaps that would be when a horn sounds and the battlefield is suddenly pelted by artillery, coating the environment in fire. Or maybe it’s the first time you really hit an opponent, and their head separates from their shoulders with a bloody, sickening, yet somehow hilarious crunch. I think I’ll just have to concede that Mordhau has a lot of 'Oh sh*t' moments. In other words, it’s very good. While technically unrelated, in spirit Mordhau is Chivalry 2: Chiv Harder. I say this not just because it’s also a team-based, multiplayer, medieval slash ‘em up that boasts similar game-modes and a grimy mud-and-blood aesthetic. It’s also because the combat system works in an almost identical way.

That’s not to say it is identical, just that the fundamentals are built along the same lines. All weapons have three basic attack types, horizontal strikes, vertical strikes, and thrusts. On the defensive side, you can press the right-mouse button to perform a parry which, if timed right, will block an opponent’s attack. In addition, you can try to throw-off your opponent’s timing either by using a feint, which interrupts your own attack and (hopefully) fools your adversary into blocking early, OR by turning your character’s “hips” with the mouse while swinging to make a blow land slightly earlier or later than if you were facing them directly. This is a perfectly sensible approach, as Chivalry’s melee combat was great to start with. What Mordhau does is take those fundamentals and add considerably more depth. For example, it adds a kick which knocks enemies back but can be blocked by another kick. It lets you counter any attacks by performing a matching attack at exactly the right moment (e.g. stabs will cancel each other out). You can also morph certain attacks, turning a horizontal swipe into a stab, or vice-versa, to trick enemies. Oh, and you can throw any weapon too, which isn’t a tactic you’ll use very often but is a lot of silly fun. There are a couple of more specific elements that I like about Mordhau’s combat. The first is that your weapon responds to the surrounding environment. If you try to swing a halberd in a narrow corridor, for example, it will catch on the walls and ceiling. This can make for some interesting tactical engagements. If an enemy comes at you with a pole arm and you only have a short weapon, then if you're close to a building or a cluster of battlefield defences, you can try to snarl them up in the environment.

The other thing I like is simply how satisfying it is, thanks to some gleefully gruesome visuals and sound effects. Mordhau has the same bizarre phenomenon as Chivalry in that, despite being a game in which people are routinely killed in horrible ways, it’s frequently very, very funny. Melees are so chaotic, with limbs flying and people being killed from all directions, and the occasional horse throwing itself into the mix. It’s just big, daft, dirty fun. In terms of modes, I tried out all of them, but I found myself most drawn to Frontlines and Horde mode. The Battle Royale mode works surprisingly well, but the game feels like it was built primarily around Frontlines, featuring large, dramatic maps with distinct objectives and special hazards. Mordhau isn’t the most spectacular looking game (at least not compared to some UE4 games like Close to the Sun), but it can be spectacular, certainly on maps like Mountain Pass.

Mordhau also boasts in-depth character customisation, which lets you tailor your warrior’s look and equipment. You get 14 skill-points that you can use on weapons, armour, and a limited set of special abilities, such as regaining health when you kill an opponent. Obviously, the better a weapon or skill is, the more expensive it is, so if you want that mighty Zweihander you’ll have to cut back elsewhere, like wearing lighter armour or not carrying a secondary weapon. It’s great to tinker around with, finding a build that works perfectly for you. There are a couple of problems. Firstly, the UI is awful, particularly the main menu where the designers appear to have sneezed the buttons onto the screen. To start a local match, for example, you need to press the FIGHT button in the top centre, then select your map, and then press 'Start', which is located above the map icons. It’s just very unintuitive and needs a revamp as soon as possible.

My other main issue is that while the combat system is brilliantly designed, it could be a little slicker. I understand that the developers want to telegraph attacks so that they’re easily readable, but I think the system would be more satisfying if attacks were quicker and parries more generous, as it would give duels a bit more ebb and flow, while also making your feel a bit less like you’re swinging your sword through treacle. Speaking of duels, Mordhau would benefit hugely from a bespoke duelling mode. Much as I love the existing modes, you can’t always experience the full depth of the combat system because you’re so frequently getting stabbed from all directions (which is exactly what medieval battles were like). Typically, some players have already set up deathmatch servers dedicated to duelling, but Mordhau deserves a specific mode for it, and I’m surprised there isn’t one on launch given that Chivalry made exactly the same mistake and the fanbase immediately clamoured for it.

Other than that, though, Mordhau is great. It takes all the lessons Torn Banner learned from making Chivalry (except one - ed.), and improves upon them in just about every way. So stick on your helmet, pick up your sword, and go get yourself brutally cut down by a better player riding a horse. It’s a riot. I promise.