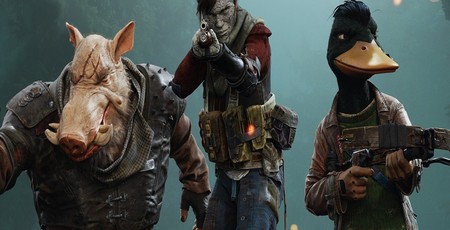 I really wanted to like Mutant Year Zero. Anthropomorphic animals exploring a Stalker-ish wasteland featuring turn-based tactical combat? Yes please. What’s even more frustrating is it gets so many things right! The writing is wonderful, the environments are beautifully designed, and when its systems click it can be extremely satisfying to play. Most of the time, however, Mutant Year Zero doesn’t click, and what you end up with is a variant of X-COM that’s simply too mechanically rigid to work. Things start off well. We’re introduced to our mutated heroes - the pig-headed Bormin and the aptly named Dux – returning from a foraging mission to The Ark, the last refuge of humanity after the apocalypse. Bormin and Dux are Stalkers, hunter-gatherers who explore a dangerous expanse of Swedish countryside known as The Zone, harvesting scrap-metal and broken weaponry to bring back to The Ark. Upon their return, the pair learn that a legendary Stalker named Hammon has gone missing, and immediately venture back into the Zone to find him.

What sets Mutant apart from the games that inspired it, and what kept me playing even when I really wasn’t enjoying it, is the world building. The broad setting is an unabashed borrowing of that from Shadow of Chernobyl, but the more specific details help set it apart. The detail on each rusting, moss-covered building is truly remarkable, while the Swedish forest you spend most of your time exploring has a distinctly frost-bitten atmosphere. Even in the south of the map, where its theoretically warmer, the forest is illuminated by wintery sunlight that gives the forest a pale and ghostly hue. Indeed, the world is shrouded in the Stalker’s own myth making, with areas given names based around monuments left behind by the previous civilisation. One area centred around an abandoned train is named The Iron Serpent, while the wreckage of a jet-liner is known as The Fallen Angel. As they explore, your Stalkers stumble upon strange artefacts from that lost world. At one point Dux warns Bormin against picking up a 'Boom-box' in case it explodes. Later, Bormin discovers a working fridge in which bandits have been storing human blood as souvenirs.

Despite its inherent absurdity, Mutant gets away with playing its concept straight thanks to sharp writing and well-drawn characters. Bormin and Dux are both hard-boiled, world-weary types who share a close but sparky relationship as they rely on each other for survival. Dialogue is deployed only when needed, but Mutant manages to say a lot in a handful of lines. Bormin’s retelling of the legend of Izza and Fala, two lovers who shared a tragic fate, tells us much about how his society thinks, while the revelation of what the names actually refer to says even more about the state of his world. Unlike most games in the X-COM mould, you explore Mutant’s small but neatly crafted environments mostly in real-time. Controlling one member of your squad, you skulk along muddy trails and through marshy grassland, using your torch to light the way and highlight useful objects, such as scrap to collect and crates that contain new weapons and equipment.

It’s only when combat occurs that Mutant reveals its X-COM-inspired side, with movement suddenly becoming grid-based and actions turn-based. It’s by and large a similar system, with each character able to move, attack, shoot reactively at moving enemies via the Overwatch mechanic, and deploy a range of different abilities unlocked via skill trees that are bespoke to each character. Most of Bormin’s skills, for example, revolve around his role as a tank; he's able to make himself invulnerable for a turn or knock-down opponents using his Hog Rush ability. Dux, meanwhile, is built around sniping, able to gain a height and critical advantage using his Moth Wings, while his passive abilities empower him with a sharper aim and a longer range. The basic framework is good, while the combat's sounds, effects, and animations are all slick and punchy. The problem is Mutant expects you to play it in a very specific way, and if you don’t meet those expectations, it’s going to punish you severely.

The highly specific skill trees are an example of this, but the rigorous nature of Mutant’s strategy becomes obvious with the game’s stealth and ambush system. Like X-COM, Mutant wants you to feel outnumbered and outgunned. But as it’s a linear adventure with a much smaller scale, it doesn’t have X-COM’s base management system for players to fall back on as a cushion when they lose. Lose a battle in Mutant, and you lose the game. So instead, Mutant encourages you to get the jump on opponents. Enemies are usually organised in a central cluster of two or three, with double or triple that number patrolling on the fringes. Using silenced weapons, you can sneak up on these stragglers and eliminate them without triggering combat. Once you’ve evened the odds, you can then ambush that central cluster and try to damage and disable them as much as possible before they can respond.

It’s an interesting idea, and initially this core loop works well. After a couple of hours, however, the game begins to dramatically inflate enemy health bars, which makes this guerrilla approach almost impossible unless you resort to increasingly elaborate skill combinations. For example, if you stun an enemy with the Hog Rush ability, they won’t be able to alert their allies on their turn, essentially giving you two turns to whittle down their health bar. You can then combine this with Bormin’s Twitch Shot ability to deal double damage on the next turn. It would be fine if this was an optional approach, but for the first half of the game, it really isn’t, because entering combat too soon is going to get you annihilated. Hence, stealth ends up becoming this very strict puzzle game where you have to do exactly the right things in exactly the right order. And it’s very easy to make a mistake, because of the way actions are bound to your mouse buttons. Right mouse is used to "hide" your squad behind cover, but left-mouse switches on your torch, making you much more visible to enemies. Also, in combat, both buttons will execute actions. I’ve had to reload the game countless times because one of my squad leapt from cover and ran into the middle of the battlefield simply because I accidentally clicked on the screen.

Even once you can match your enemies for firepower, fighting an enemy soldier with 30HP and level 3 armour, each of which reduces your damage output by 1, is just tedious. The joy of X-COM came from using teamwork to quickly dispatch even the most powerful opponents, while the alien threat came from their numbers and abilities rather than their raw endurance. Mutant, by comparison, feels like a constant war of attrition, and it eventually ground my enthusiasm down completely. It’s unfortunate, because there’s some quality design in Mutant Year Zero, and as I said the storytelling and world-building is mostly excellent. If you can tolerate the game’s railroaded strategies and hair-trigger fail-states, you might find something to enjoy here. But I just didn’t have the patience for its ponderous combat and fiddly stealth.