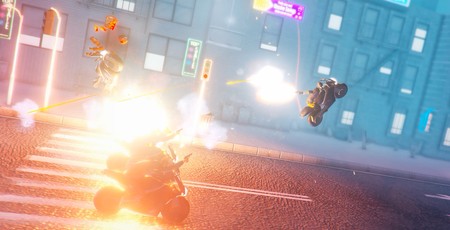 I’ve had my eye on My Friend Pedro for a long time, ever since its existence amounted to a few cool gifs showing off its procedural action-stuntmanship on Indie DB. A side-scrolling shooter that combines Max Payne-like Bullet Time with Tony Hawk-style stunts? Put it in an aerosol canister and let me breathe it into my lungs (don't do this, kids - ed.). Naturally, I was thrilled to get my hands on the final product when it launched last week. Unfortunately, My Friend Pedro isn’t quite the blow-me-down adrenaline rush I had hoped it might be when I first discovered it. The reason for this comes down to an ineffable quality that affects all action games – the significance of flow.

We’ll get to the high-minded critical gubbins later. First though, let’s talk about what My Friend Pedro does right, because the answer is 'quite a lot, to be fair'. The game places you in the role of an anonymous vigilante who awakes in the bloodstained basement of a local criminal organisation with no memory of how he got there. His only companion is a floating banana called Pedro (yep) who advises you that the best way out of this situation is to mercilessly kill everyone. At its barest bones, My Friend Pedro is a straightforward side-scrolling shooter, where the two primary interactions are jumping and shooting. But, as I mentioned earlier, the game adds to this skeleton a whole bunch of additional mechanics that transform you into a scruffier version of Neo from The Matrix. You can slow down time, dive through windows, and pirouette to avoid bullets.

Alongside these are two slightly more unique mechanics. If you’re holding two guns, you’re able to aim in two directions at once, locking on to an enemy with one gun and manually aiming the other. In addition, you can kick various objects at enemies for an instant kill, which includes basketballs, explosive canisters, and, er, bits of other enemies. It’s worth noting that My Friend Pedro doesn’t force you to excel at its stunts; there is a scoring system that tracks how skilfully you kill enemies, but it’s purely for bragging rights. Instead, it encourages you to engage with its action-movie setup with cleverly constructed levels and object placement. For example, enemies tend to be placed at either end of a room, so the best way to deal with them is to dive into the centre of the room and use two guns to blast them at the same time.

Often you’ll need to combine several of these abilities at once, or at least in quick succession. My Friend Pedro isn’t the easiest game in the world to control, but it is easier than it looks. This is mainly thanks to the healthy bullet-time bar the game provides, which also refills substantially with every enemy killed. This gives you time to think about what your next move needs to be and adjust on-the-fly as situations change. For the first half of the game, My Friend Pedro does a fantastic job of upping the ante both in the scenarios you’re faced with and how it helps you overcome them. Each level adds an extra layer of complexity to the action, such as introducing ropes that you can dangle upside-down from while raking a room filled with enemies with gunfire. Later levels add metal plates that you can ricochet bullets off, and even skateboarding sections that essentially let you ollie your adversaries to death.

My Friend Pedro also possesses a wonderfully surreal sense of humour. Your chatty banana buddy often chimes in with a silly quip or weird non-sequitur, and if you pull off a particularly impressive stunt, he’ll lean out from the side of the screen pulling a daft face. Meanwhile, your opponents include pensioner gangsters dressed in overpriced shell-suits and bounty hunters whose Christmas shindig you just so happen to crash. The game reaches its high-point in the middle, in an entirely ridiculous sequence of levels that also offer the most spectacular action. Sadly, this ludicrous high is followed by a hard comedown in a second half that isn’t nearly as fun as the first.

At first, it isn’t entirely clear what’s changed. The second half adds to your roster the two best weapons in the entire game, an assault-rifle with underbarrel grenade launcher, and a devastatingly powerful sniper rifle. Meanwhile, the game’s bizarre humour continues apace, taking you down into a sewer populated by hardcore gamers as you embark on a mission to infiltrate the Internet... What?

Yet while everything is superficially the same, the tone of the piece has changed. The humour becomes less silly and more edgy but in a way that feels distinctly out of date. For example, making a joke about crappy sewer levels is straight from Ye Olde Joke Shoppe, especially when your sewer level is, at times, quite crappy. This is the other area where My Friend Pedro changes. In the second half, the game switches from throwing objects at you that help you pull off cools stunts, to throwing obstacles at you that seem designed to hinder it. In the sewers, for example, you bump into laser guided mines that home in on your position and explode, while the final level requires you to avoid laser traps and giant plasma beams on a timer.

Consequently, you’re forced to progress through these levels according to a strict timer, and the result is it hinders the wonderful flow of the game’s action. You’re no longer thinking about the coolest way to kill enemies or the slickest method to navigate next room; you’re only thinking about solving the specific puzzle in front of you. It’s as if John Wick turned into a legal drama halfway through – watching people exchange cleverly constructed phrases in a courtroom isn’t really what I signed up for.

Given that My Friend Pedro only lasts four to five hours, this problem affects a substantial portion of its length. Had My Friend Pedro maintained its momentum closer to the end, I’d be comfortable recommending it. As it stands, however, half of My Friend Pedro’s banana simply isn’t ripe enough to enjoy.