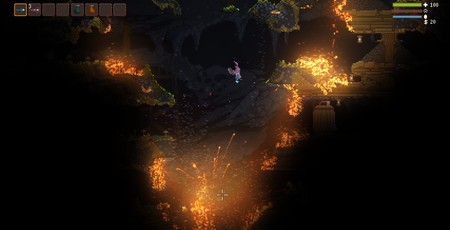 Noita is different from other roguelikes, because no matter how difficult the game gets, your greatest enemy is always yourself. The game’s primary feature may be its granular world simulation, but most of your time will be spent wondering whether the next wand you pick up is going to blow you to smithereens. Amongst the many, many deaths I’ve had at the hands of Noita’s enemies, I’ve also died by nuking myself, by being hit in the head with a ricocheting sawblade, and by trying to stop myself being on fire by spraying myself with acid. It’s “What does this button do?” the videogame. And you might think that this would make Noita impenetrable. For me, it has the opposite effect. Whereas other roguelikes like to push you into a corner, Noita is often quite happy to let you be the architect of your own demise.

At first glance, Noita bears a lot in common with that other randomly-generated 2D nightmare – Spelunky. Each game starts with your pixelated witch standing just outside a cave. From here, you’re supposed to descend through a sequence of increasingly challenging environments, fighting or avoiding enemies, collecting gold, and spending it on new equipment and upgrades. The differences between Noita and Spelunky start with the tech. Noita takes Spelunky’s idea of a highly-reactive environment and runs with it off a cliff into a giant pool of lava. The game is built on a custom engine in which, according the developers, “every pixel is simulated”. What this basically means is the gameworld is constructed from individually-designed substances, and these substances are programmed to react with other substances in a believable way.

As a simple example, burnable substances like wood and coal will ignite when in contact with fire. Since large expanses of the early levels are made of wood and coal (the second area is literally called The Coal Pits), this means fire can propagate in ways that can affect large portions of the level. Water, as you would expect, quenches fire. But water can also dilute hazardous substances like toxic sludge and acid. Acid, meanwhile, will eat through the level geometry like a horde of squirrels through the KP factory. One of my favourite substances is gunpowder, which crackles and pops when ignited like a giant, deadly bowl of Rice Krispies. Alongside these familiar substances are more exotic examples like ambrosia, which gives you temporary invulnerability. Flummoxium confuses any creature that stands in it (which for you means reversing your controls). The brilliant polymorphine, meanwhile, will change you or anything else that steps into it into a random creature or object, the possibilities ranging from a sheep to a treasure chest.

Considered on its own, this world simulation lends Noita a glorious chaotic energy where every run truly feels unique. Yet unlike Spelunky 2, where the vast majority of its systems are pointed against you like a New York gang’s guns at John Wick, Noita gives you much more agency in your interaction with its world. This agency comes in two primary forms, flasks and wands. Flasks allow you to scoop up any liquid in the game world, and either spray the liquid around, or throw the entire flask, which will shatter on impact. You can use flasks in a variety of ways. A flask of water will help keep you alive when you inevitably set yourself on fire. But flasks can also be used as makeshift weapons. Imbued with acid as a deadly spray gun, or chucking a flask of gunpowder like an incendiary grenade.

The most powerful tools in your arsenal, however, are wands. Wands come in many shapes and sizes, and will always have at least one randomly-chosen spell attached to them. The range of Noita’s spells is truly mind-boggling. You’ve got simple attack spells like magic bolts and arrows, environmental powers like summoning fireballs and rainclouds, and then truly weird stuff like spawning sawblades or black holes. Spells can also be modified in countless ways. You can create homing spells, scattershot spells, spells that trigger other spells, the list goes on. It’s a powerful system, albeit somewhat idiosyncratic. The result of all this combined is, well, it’s ludicrous, frankly. Noita plays like a game that somebody else added a load of ridiculous mods to. Sometimes you’ll spawn in a new area and notice the screen vibrating slightly. This would be a cascade of huge explosions happening much further down the level, an entirely dynamic consequence of the game’s colliding systems.

All this randomness means that sometimes Noita can feel unbalanced and unfair. But in many ways Noita is more generous than most roguelikes. After each area, you get the chance to refill all your health and all your spells, as well as buying new wands and one-off modifiers like an extra life or temporary invisibility. In addition, there’s no pressure on you to reach the next area. You can take all the time you like, exploring for new wands and flasks, using explosive spells to mine gold from the ground. Yet while I don’t think Noita is unfair, it is perhaps a little too reticent when it comes to explaining itself. A small example is that you don’t have to go down in Noita. You can explore left, right, and even up, and there are whole new areas that you can completely miss if you’re not aware of them. A few practical instructions, like how spellcrafting works, wouldn’t have gone amiss either.

Nonetheless, I absolutely adore this game. I’ve not even mentioned how fantastic the game’s production values are. Screenshots don’t do justice to how fantastic Noita looks in motion. The way the world moves and flows, the way fire cascades through flammable liquids, illuminating the surrounding area, looks stunning. But Noita also feels really satisfying, which is something a lot of “retro” 2D games struggle with. Combat has a real crunch to it, the way spells punch into enemies, the way bombs explode with a resounding smack. One of my favourite little mechanics is the kick, which lets you boot objects off ledges with the chance that it might squash an enemy down below, saving you a little work later on. I love Noita. It’s completely wild, utterly uncompromised, absolutely ridiculous, and more fun than a basket full of puppies and chocolate. And even when those chocolate-covered puppies destroy your living room before smothering you in sticky brown fur, it’s an absolute delight, and you’ll die with a smile on your face.