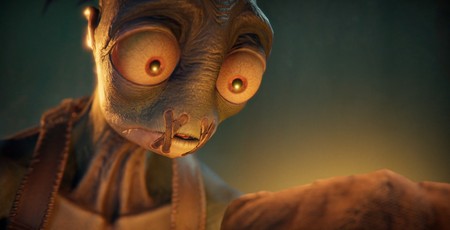 Oddworld: Soulstorm isn’t a terrible game, but it is a somewhat pointless one. A reimagining of Oddworld: Abe’s Exoddus, Soulstorm is neither true enough to the spirit of the original to satisfy fans of it, nor different enough in play to justify the changes it makes. It rests at an awkward midpoint between nostalgic classic and accessible modernisation, and while there are moments when it shines, ultimately Soulstorm comes across as a confused and haphazard design. 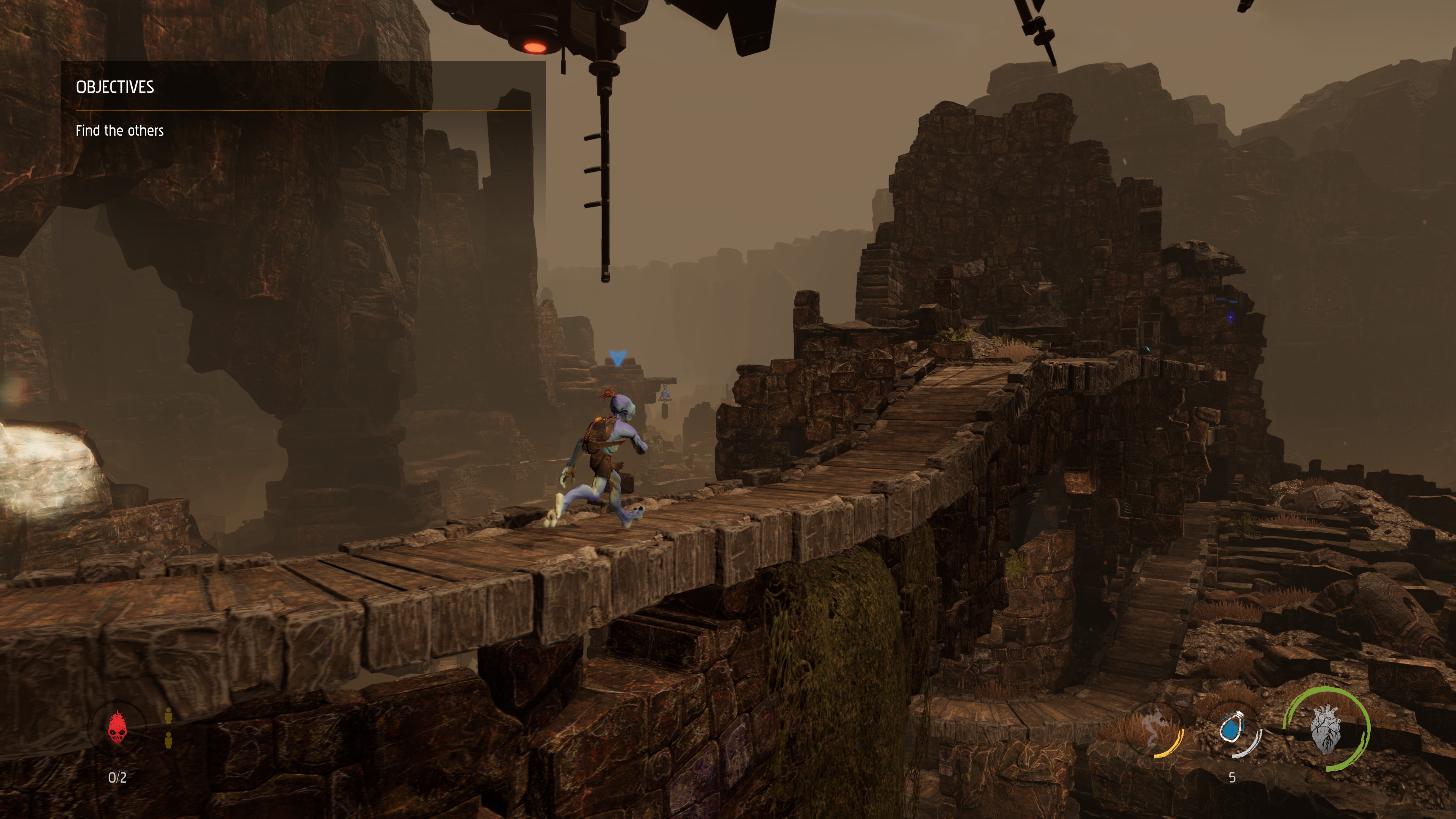 Soulstorm loosely follows the plot of Exoddus, still revolving around the eponymous green soft drink that made Abe’s farts extra-dangerous in 1999. But the drink has been refitted into an almost completely new version of the Exoddus story. In this version, Abe and his newly liberated tribe is attacked by a vengeful Molluck, the disgraced former owner of Rupture Farms. While escaping the bombardment from Molluck’s weaponised blimp, Abe discovers that something is making his fellow Mudokons sick, leading him into another quest to save his beleaguered people.

It’s a decent rewrite, but I don’t think it’s any better than the original. Primarily, it enables Oddworld Inhabitants and its many third-party developers to imbue the game with greater spectacle, which is the only unqualified improvement that Soulstorm makes over Exoddus. The game’s puzzles are contained within elaborate environments and several dramatic set-pieces that are impossible not to admire. Soulstorm opens with Molluck’s assault on the Mudokon camp, with Abe sprinting through clouds of shrapnel and splintering wood while hundreds of Mudokons scatter to the winds. At the midpoint of the game, Abe hijacks a giant, suspended train, which barrels along at X-hundred miles-per-hour while other trains scream past in the opposite direction. 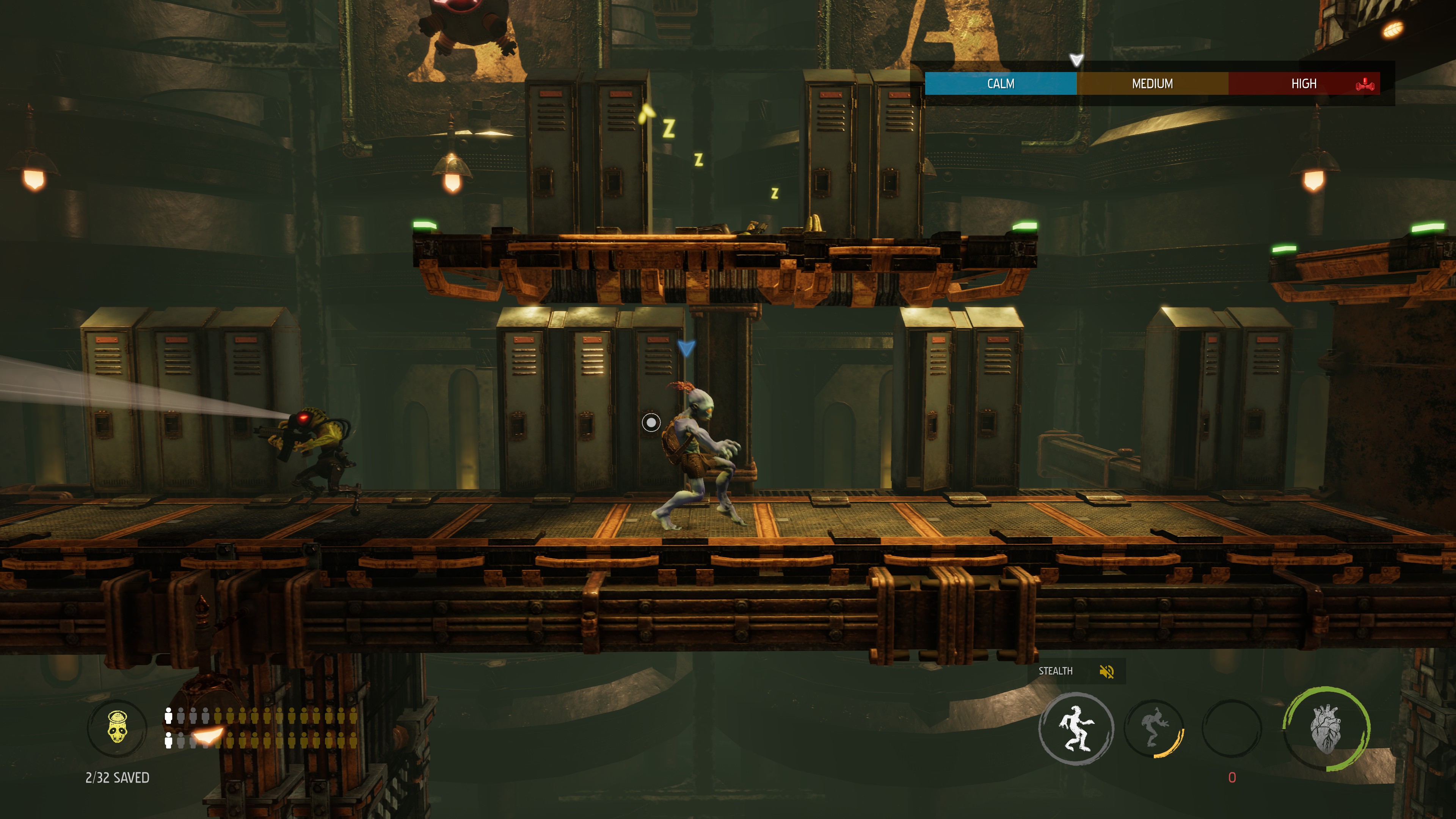 Levels, too, are larger and more intricate. Gone are the static single screens of the first two games, replaced with rollercoaster-like 3D spaces filled with twisting, looping pathways. The game still plays on a 2D plain, but it makes excellent use of a 3D camera, with you often able to see later parts of the level far off in the distance. One of the best examples of this is Phat Station. A massive industrial complex, you spy the train you’re destined to hijack right at the outset. As you explore, you’ll in the background you’ll spy the tiny silhouettes of Mudokons you need to rescue, scrubbing elevated gantries amid the station’s enormous gas tanks and serpentine pipework.

Beneath all this visual razzmatazz, Soulstorm retains the core mechanics of the early Abe games. It’s still a puzzle platformer with the emphasis firmly on “puzzle”. It still involves rescuing Mudokons, possessing enemies before killing them in gleefully gruesome ways, and avoiding a dungeon’s worth of deadly traps and hazards. It’s still tooth-crackingly difficult, with many puzzles demanding precise movements from a character not famed for his agility (though Abe is more acrobatic than before, able now to double jump across chasms). 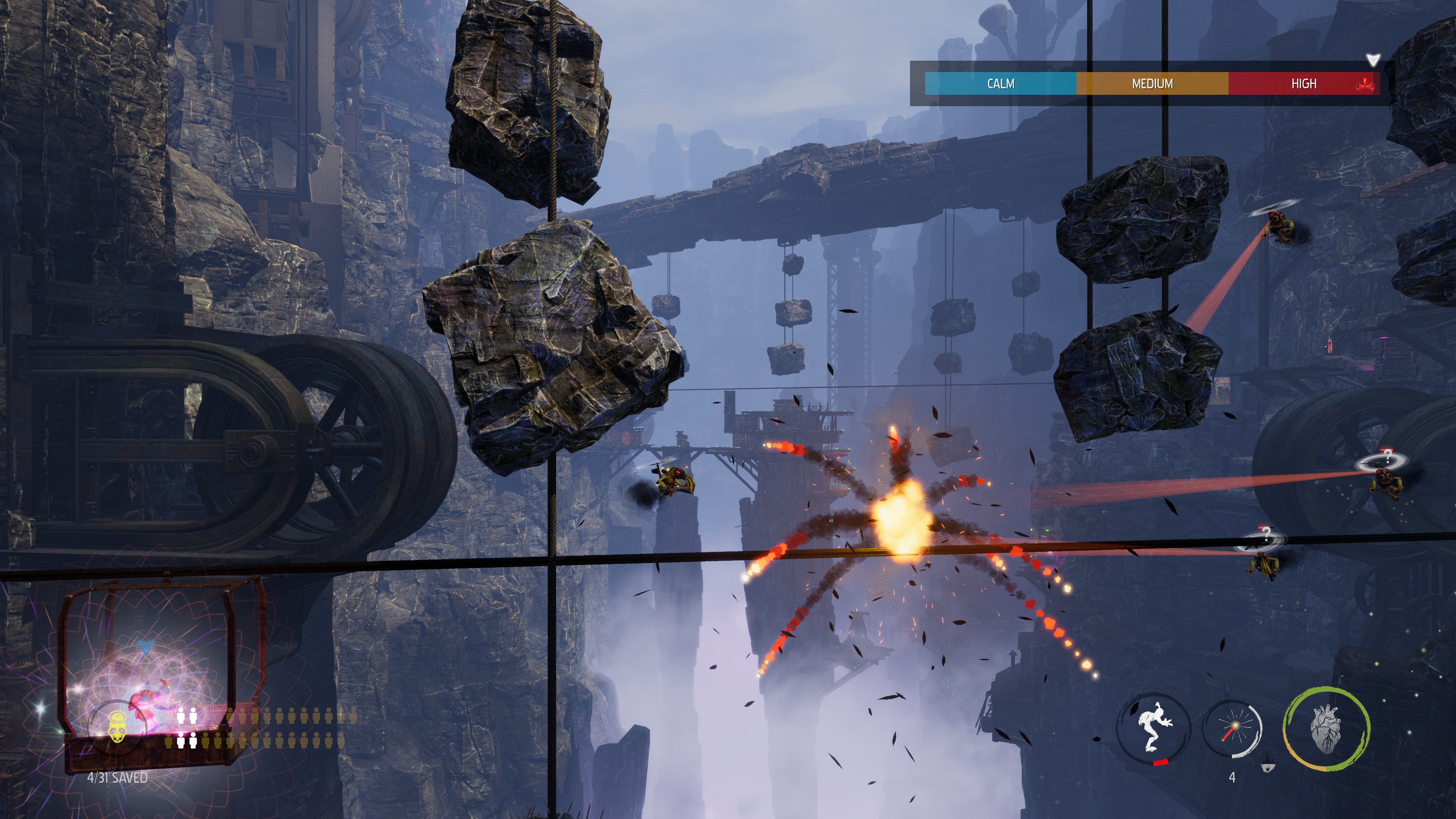 When Soulstorm is doing all three of these things together, it’s a pretty good time. But part of the problem is Soulstorm takes ages to get to this point. Beyond a couple of set-pieces, you don’t actually rescue a Mudokon until level four, and Soulstorm’s levels are long, so this is about three or four hours into the game. Indeed, the opening levels are generally weak, a dun parade of brown ruins and grey mountainsides with puzzles that mostly involve sneaking your way around slig patrols.

The bigger issue, though, is that Soulstorm strips out a much what made Exoddus an interesting game. Gone are Abe’s explosive farts, for example. In fact, the game is practically fart-free. But the real tragedy is the loss of Exoddus’ nuanced Gamespeak. Not only does Soulstorm feature a mere handful of basic commands, it also completely lacks the varying emotional states of the Mudokons. In Exoddus, fellow Mudokons could be angry, or sad, or energised, all of which required Abe to respond to them in different ways. It was a neat system that felt like a true evolution of Oddyssee’s ideas, and the loss of it is undoubtedly to Soulstorm’s detriment. 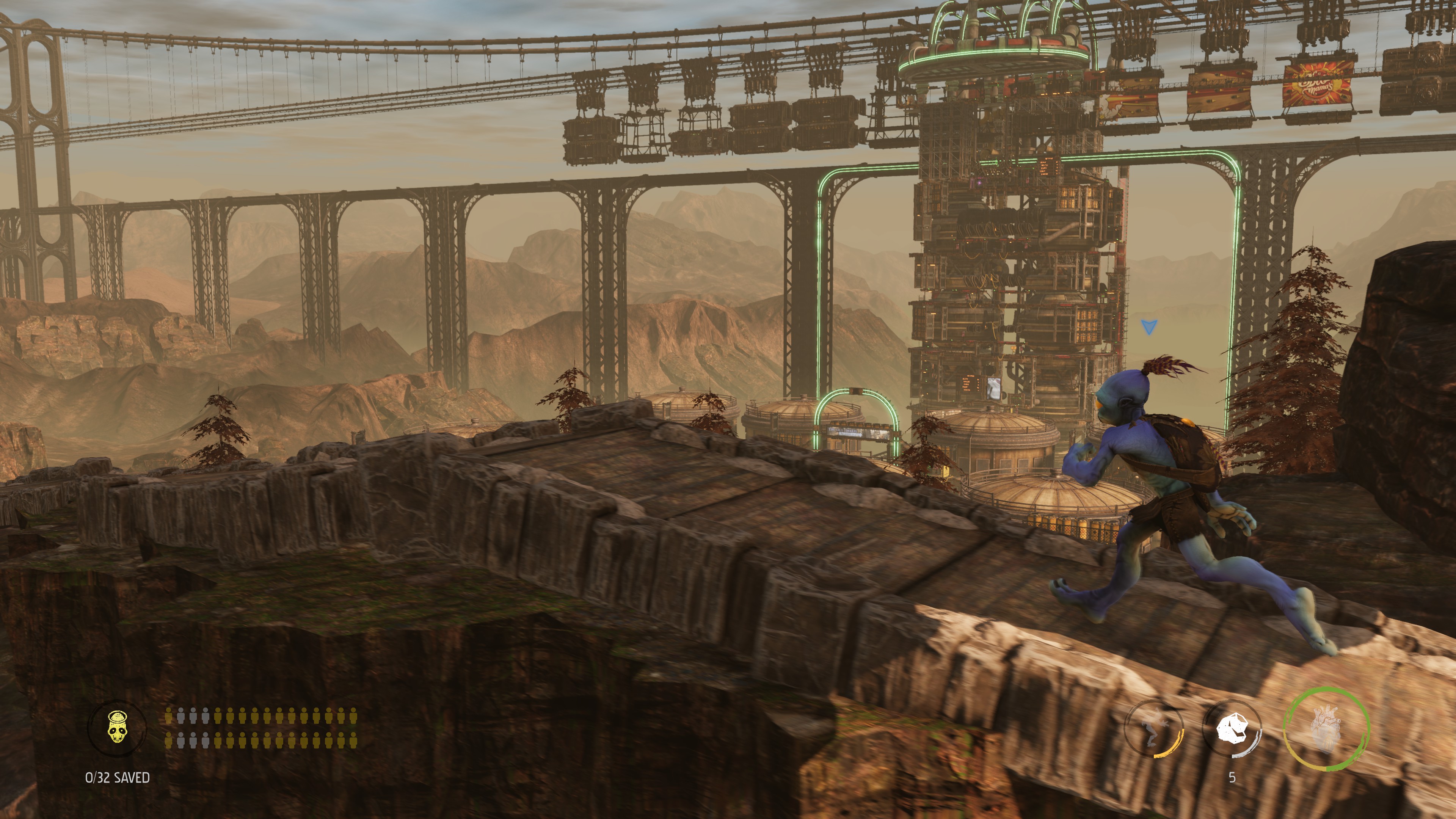 Soulstorm does replace these older features with new mechanics. Unfortunately, its primary new feature is crafting that’s weaker than a Waitrose korma. Abe has around a dozen different items he can use to help him deal with enemies, from smoke grenades that let him slip past slig patrols, to more eclectic and nefarious devices. The items themselves compensate somewhat for the Exoddus’ discarded features, but the actual crafting system actively makes the game worse.

To start with, it’s barely a crafting system at all. All you do is collect resources from the environment, then press a button to instantly create the item you need. It involves no creativity or process whatsoever. Moreover, other crafting games tend to scatter resources across a wide area, infusing exploration and discovery into the act of crafting. But because Soulstorm is entirely linear, resources are nearly always gathered at the point where you need the item they create. Combined, these two issues render the whole concept of crafting redundant, and Soulstorm may as well skip all this and furnish you with the finished item right away. 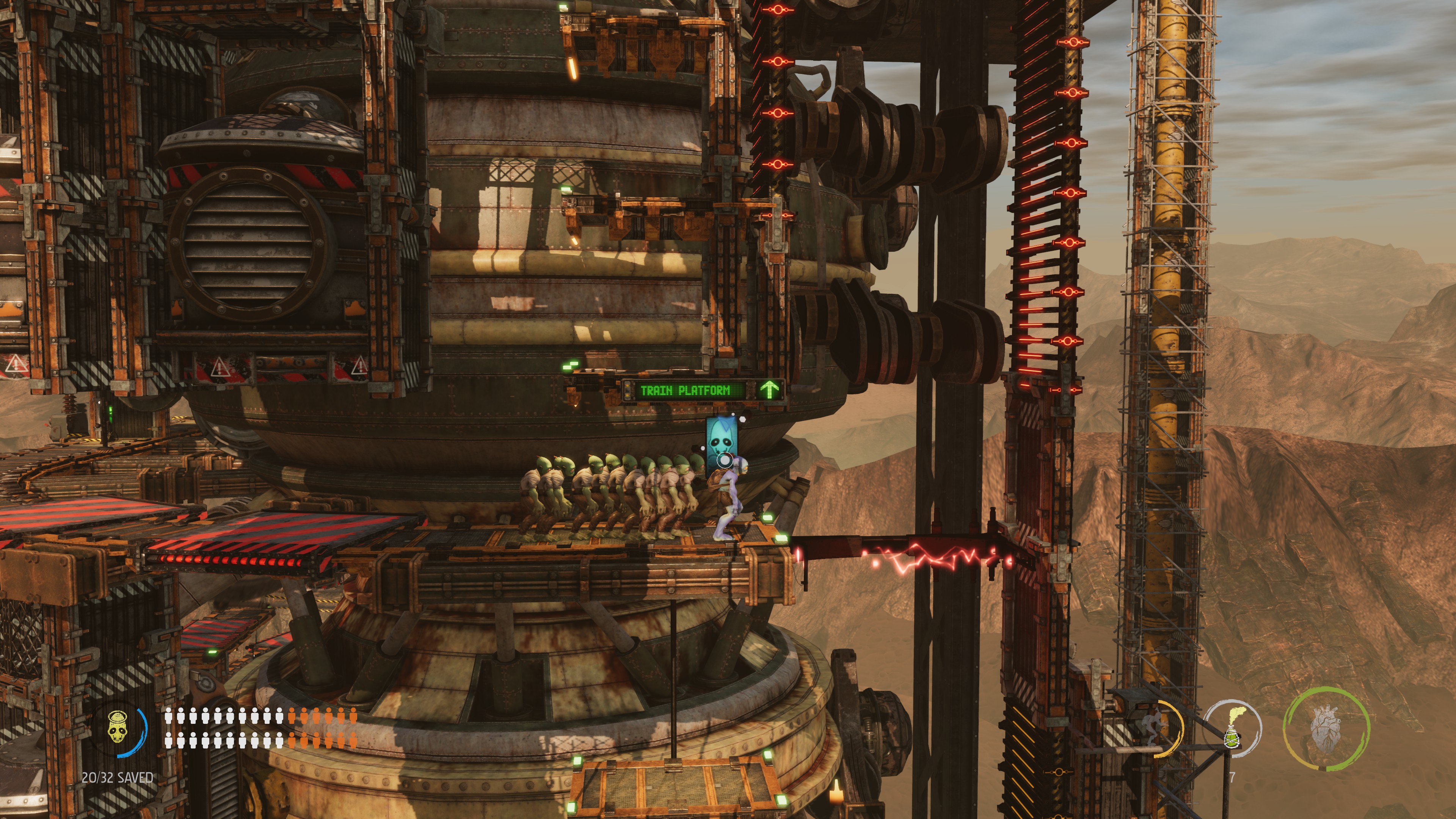 The other problem with the crafting is that it serves to compound the frustration of failing a puzzle. Soulstorm saves your progress via checkpoints, and the way checkpoints are distributed means you’ll often need to perform item gathering after the checkpoint, but before the puzzle. Hence, if you die, you then need to spend a couple of minutes re-collecting the resources and re-crafting the items. Having to do this before nearly every puzzle obliterates the game’s pacing. Imagine an FPS that forced you to clean all your guns every time you died. That’s the effect crafting has on Soulstorm.

It all falls a bit flat, to be honest. The original Abe’s Exoddus was made in just nine months, due to GT’s Interactive hunger for a sequel to Oddyssee. That feeling of rushing out Exoddus is cited as the main reason Lorne Lanning wanted to not just remake it, but reimagine it entirely. Sadly, Soulstorm mainly serves to demonstrate how pressure to perform can benefit a project, as the six years Soulstorm has taken to develop has not resulted in a better game. It isn’t a disaster, but for all the effort that has clearly gone into it, Oddworld Inhabitants & co might have been better off sticking with a straightforward remake. 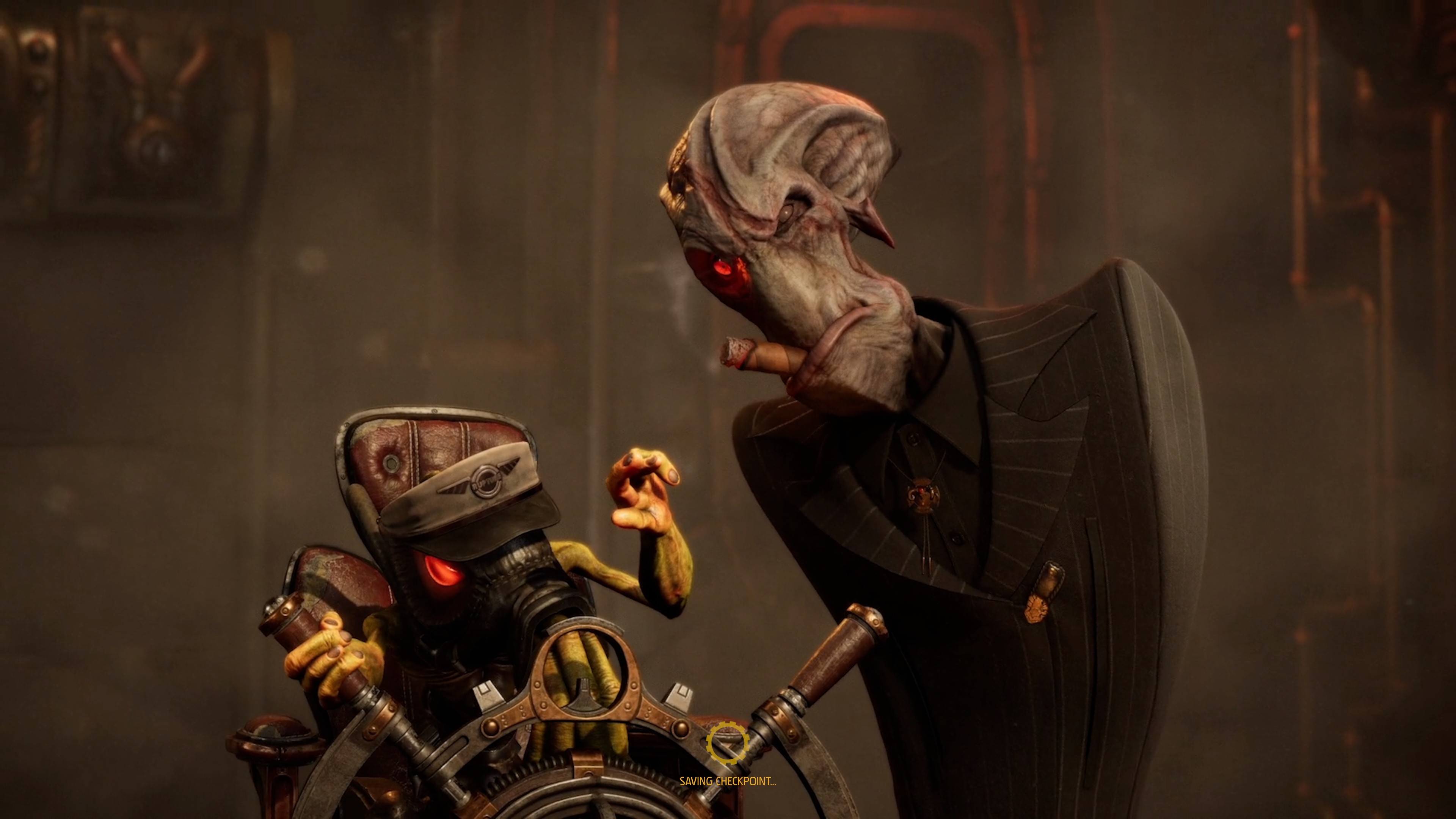