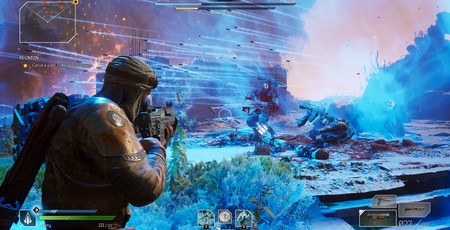 I thought I would be bored witless by Outriders. Billing itself as a combination of Gears of War cover-shooting and Destiny-style loot hording, Outriders appears designed by a committee of middle-aged accountants, holding entrenched yet antiquated ideas of what the kids consider popular. With a grungy visual style and a whole lot of shooting numbers out of things, you’d be forgiven for thinking it a far cry from developer People Can Fly’s previous work, such as the celestial onslaught of Painkiller and the hyper-grotty, hyper-imaginative Bulletstorm. 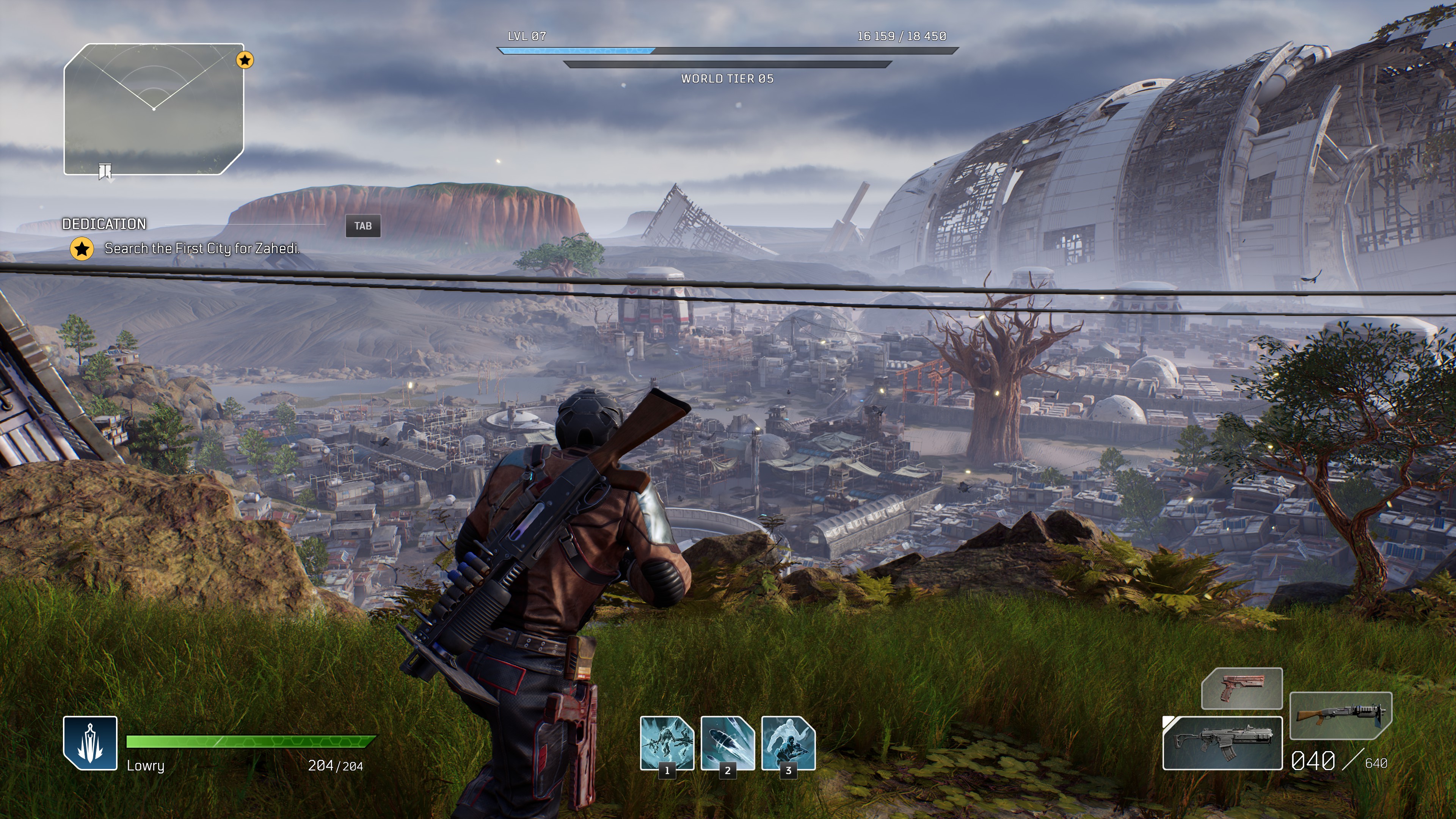 It’s true that Outriders isn’t as interesting as either of those games. Yet the anarchic spirit of People Can Fly hasn’t been entirely exorcised by Outriders’ appeal to popularity. While it may look like a rote cover shooter drizzled in Destiny sauce, Outriders has a couple of surprises up it’s +3 armour sleeves, while it also retains People Can Fly’s knack for intense and bloody action.

It does get off to an unfortunate start, however. Set a century plus change in the future, the basic premise of Outriders is that Earth is dead, kaput, toast. What remains of humanity sleeps in cryostasis aboard the generation ship the Flores, en-route to a new planet the survivors believe offers a second chance for humanity. Upon arrival, however, they discover that what appears to be a green and pleasant land is wracked by a terrible, anomalous storm, and humanity’s second chance quickly descends into a nightmare of war, famine, and monster-induced terror. 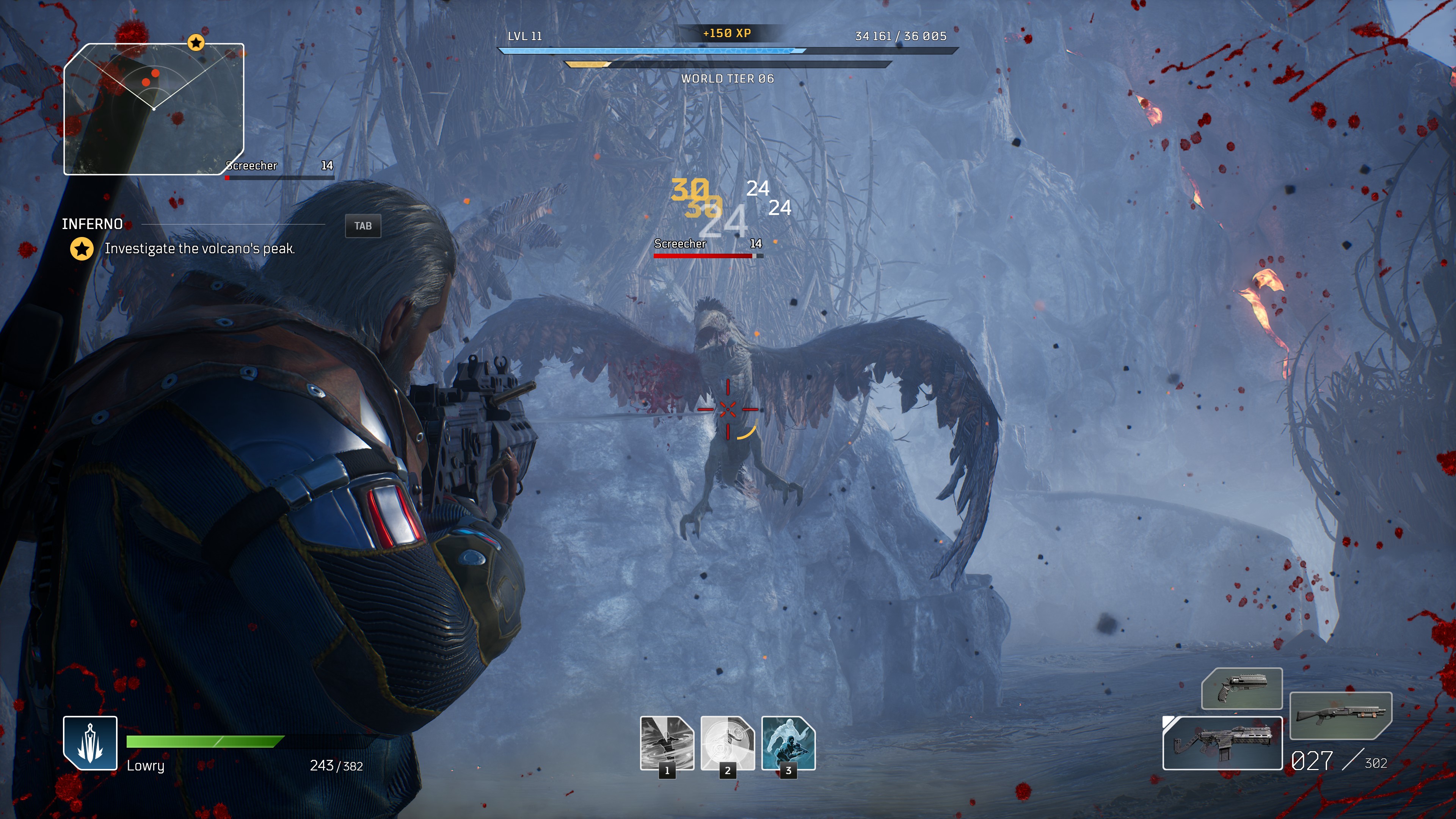 While the premise is more interesting than your usual shoot ‘n’ loot affair (and considerably more coherent than Destiny), the intro is undermined by being narratively too fast and mechanically too slow. It crams a film’s worth of events into half an hour, all while monotonously teaching you how to hide behind a chest-high wall for the billionth time. It also suffers from some iffy writing, including a British baddie who isn’t so much chewing the scenery as swallowing it whole like a snake, alongside a couple of cringeworthy lines such as “Know my way around bullets, not kids”.

After this, the game skips ahead thirty years, as your character is returned to cryo after being afflicted by the anomaly. Instead of dissolving you like it does most people, however, the anomaly gives you superpowers. Together with a group of scientists, psychics, and, er, Poles, you use this ability to travel across the planet in search of a mysterious signal that might hold the key to humanity’s salvation. 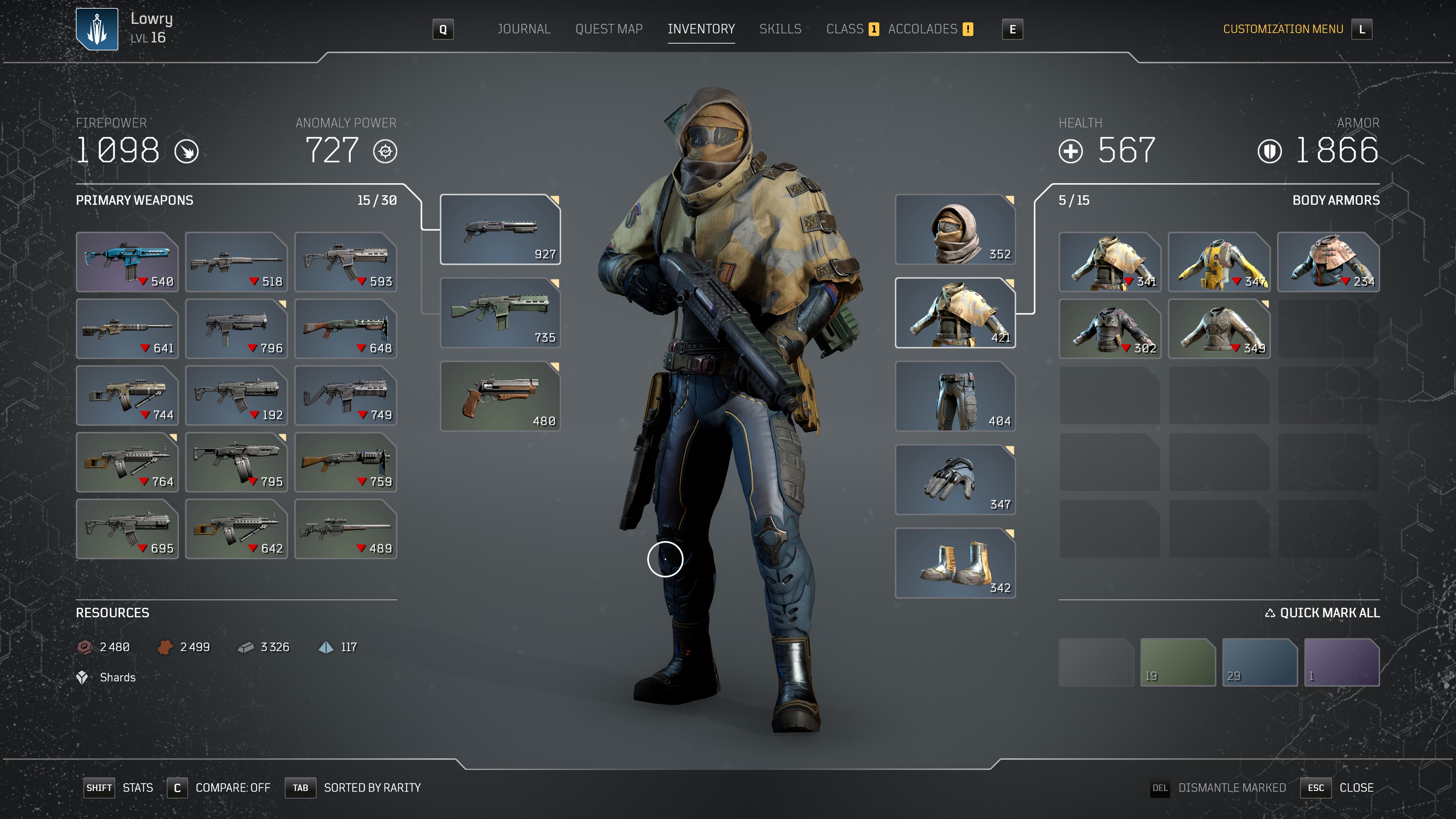 In practice, what this means is battling through twenty or so large, prettily drawn environments against hordes of human and alien adversaries. As both a cover shooter and a looter shooter, Outriders is bang average. The core shooting is a standard Gears of War affair of crouching behind walls and popping up to blast enemies in the head. The loot element, meanwhile, takes several hours before it becomes in any way interesting. Most of your early loot is either drab military equipment or post-apocalypse gear cobbled together out of burlap sacks and the skin of your fallen comrades.

But Outriders is rescued from mediocrity by two key features. The first of these is the class system. There are four classes to play as, each of which has its own unique set of abilities and play-style. These include the Technomancer, a gadget obsessed sniper designed for long-range combat. The Pyromancer, a mid-range fire-mage, and the Devastator, a close-range tank who uses geomantic powers to both deal and absorb huge amounts of damage. 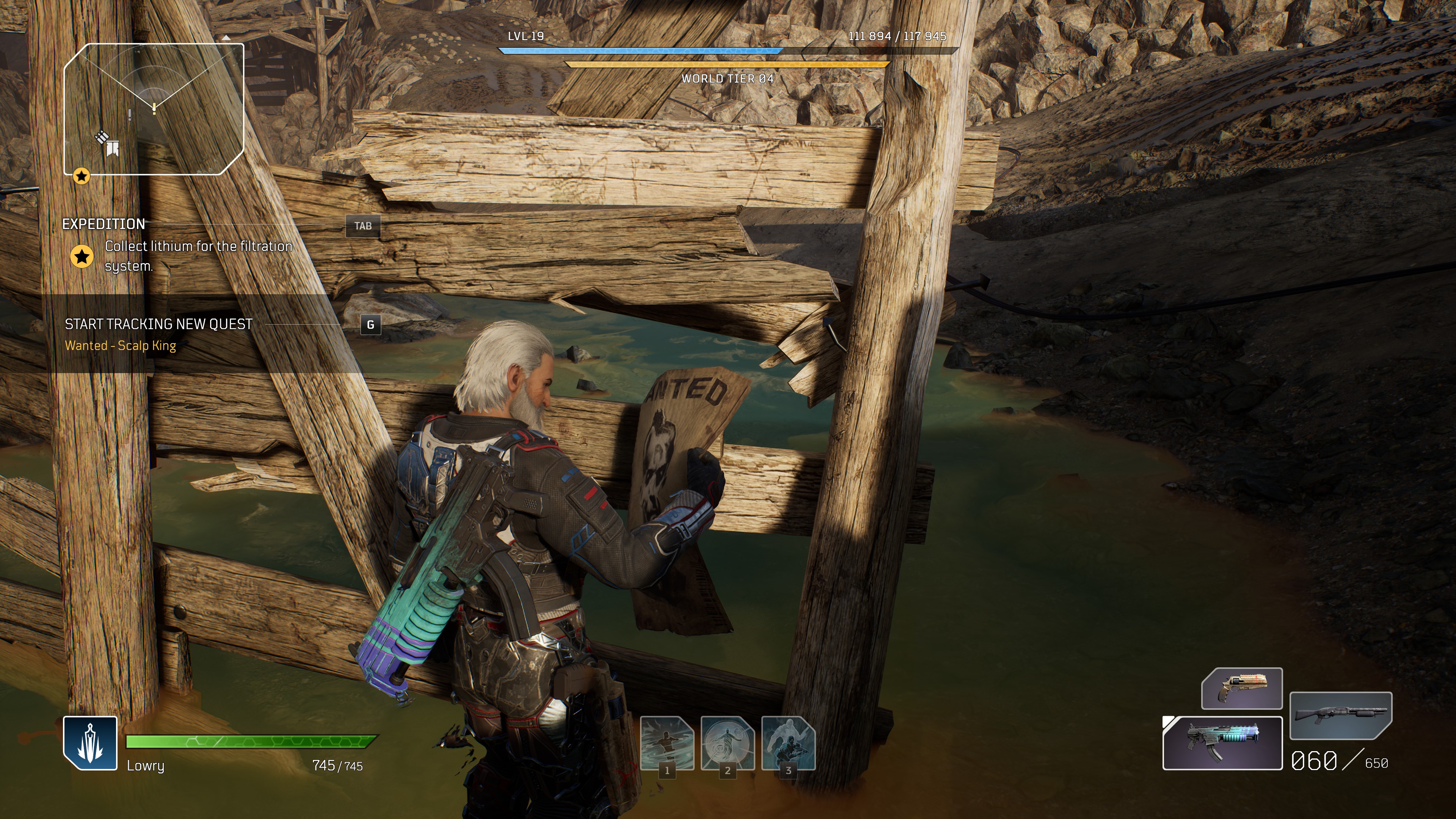 But my favourite class, and the one I spent most of my time with, is the Trickster. A hit-and-run fighter, the Trickster gains health and armour by killing enemies at close range, while their powers all revolve around manipulation of time and space. These include the ability to teleport behind enemies from long range, create a bubble that slows down time inside it, and a bladed attack that speeds up the timelines of individual enemies, reducing them to skeletons within seconds.

The result of this is that you’re constantly on the move, constantly looking for ways to use enemies as fleshy health dispensers. The Trickster liberates you from the confines of cover, letting you cross the battlefield in an instant, blast an enemy into mush with a shotgun, then conjure a time bubble to stop oncoming enemies overwhelming you, giving you a chance to plan your next move. 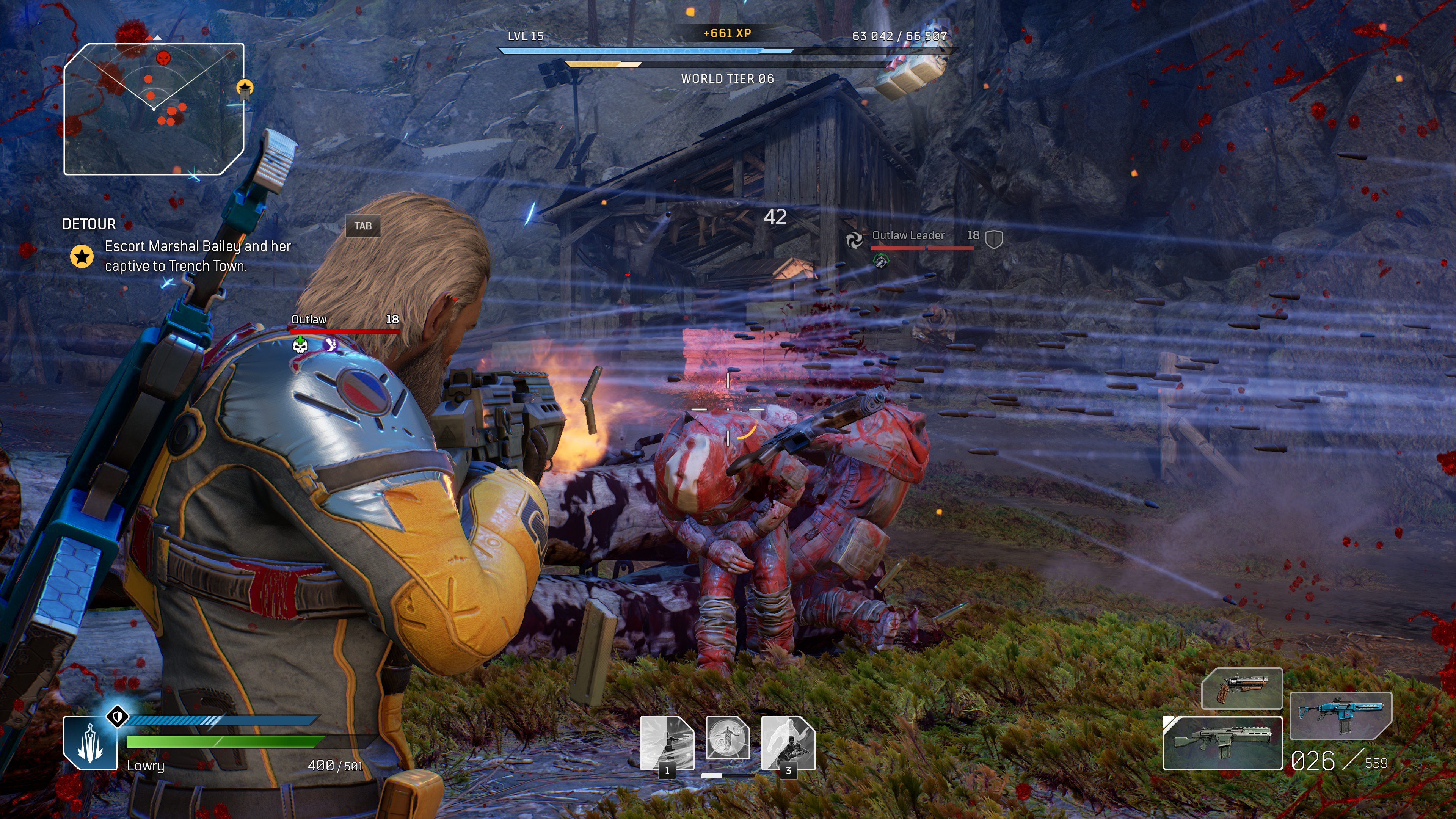 The Trickster’s manoeuvrability and in-built healing skills makes him the ideal class for solo play, while also effectively demonstrating the second of Outriders’ clever features – World Tiers. World Tiers are essentially a dozen different difficulty settings that, by default, increase as you play the game. With each new tier, enemies become tougher and more dangerous, but they also drop better quality loot.

This means Outriders’ action gradually intensifies, testing your familiarity with your skillset and your affinity with your weapons. Crucially though, you can manually set the World Tier to any of the twelve levels at any time, tailoring your experience to be as easy or difficult as you like. I found Tier Six was my limit for solo play, though I’d often drop it down to Tier Four when feeling frustrated, then raise it higher when playing in a team. 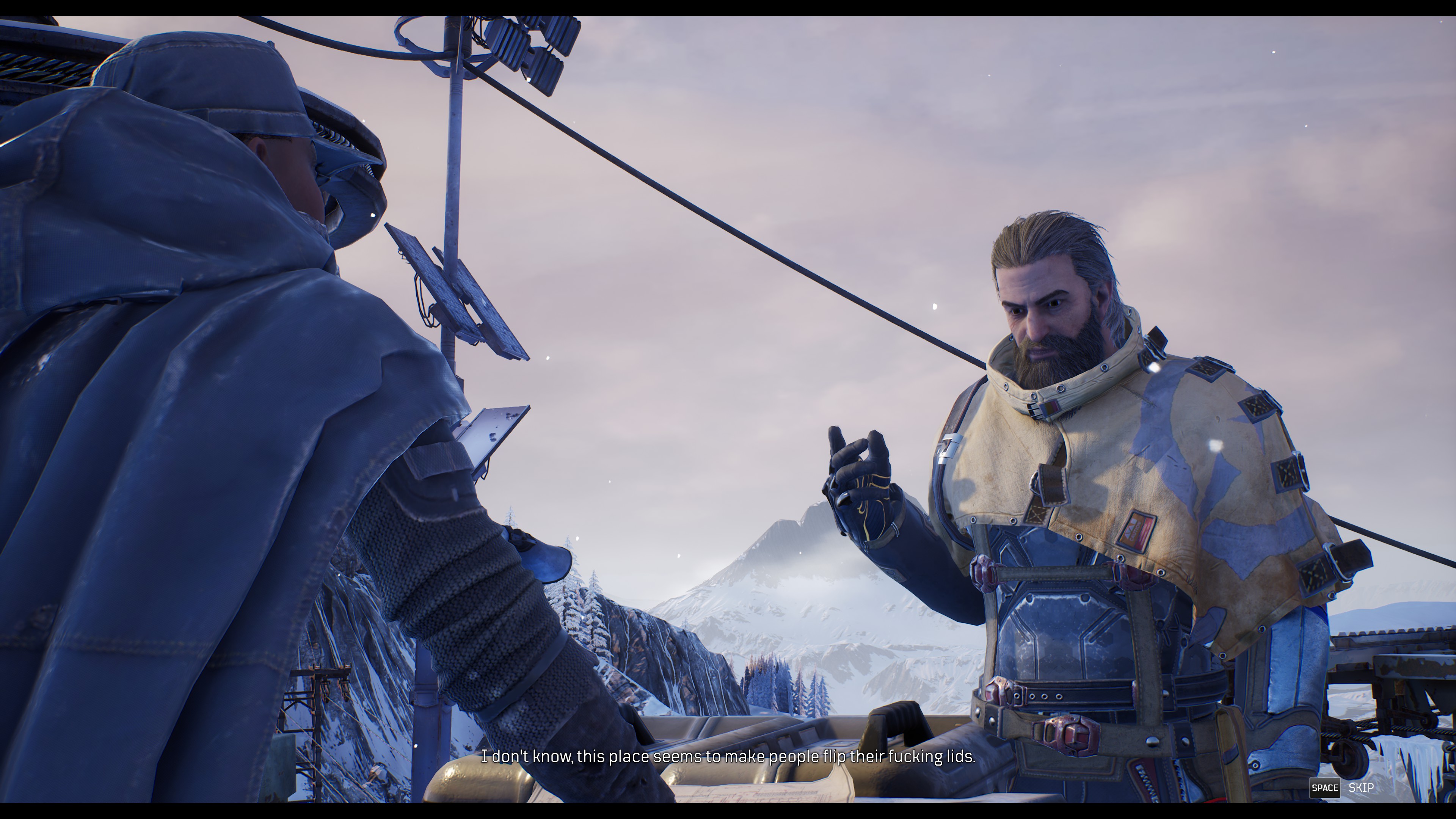 These two elements make Outriders more than just a cover-shooter with loot. Its action is intense, highly versatile, and stupendously gory. Furthermore, although the story starts badly, your quest to track down the mysterious signal does eventually manifest into an engaging adventure, one populated by a surprisingly well drawn cast of characters that the game has no qualms about killing off in shocking fashion. The narrative capacity to surprise extends to the side-quests too, which often feature a neat twist in their tales that elevates them above standard fetch-quests.

I’m confident in saying that Outriders is a decent sci-fi romp. But that isn’t to say it’s a masterpiece. One of its bigger problems is that character progression is often dull. While you unlock a cool new ability once every few levels, the larger skill tree is mostly stuffed with incremental percentage upgrades. It’s a shame that Outriders doesn’t let you modify your abilities in any significant way, or expand the fairly limited number of ability slots, giving you more freedom to experiment with the combat system. Loot, meanwhile, only gets truly exciting at Epic and Legendary levels, when you unlock a shotgun that brings down lightning bolts from the sky, or a rifle that slows down enemies when shot. 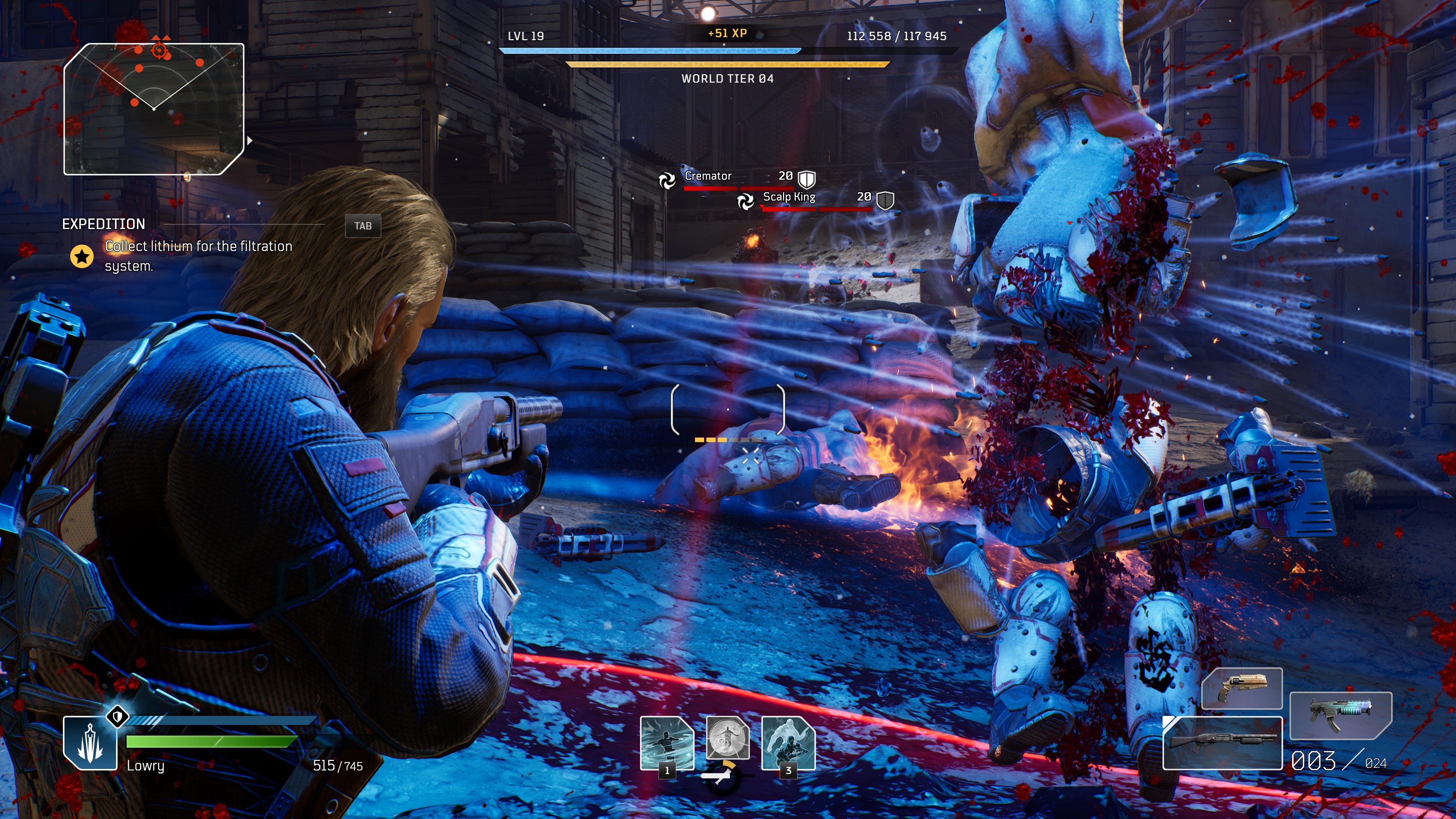 Another issue is that, while the environments are varied and often have dramatic backdrops, they feel extremely artificial in exploration. Battlefield barely even try to dress up the regular intervals of cover as natural parts of the landscape. Indeed, the cover system is often more an inconvenience than anything else. When playing as the Trickster, it serves mainly to get in your way when using abilities or trying to escape from enemies. This problem isn’t quite so pronounced with other classes, but it does sometimes feel like the game would have benefited from ditching cover entirely and focusing more on momentum and manoeuvrability.

In the end, Outriders is a looter-shooter where neither the looting nor the shooting are what make it worth playing. Those elements work well enough, but it’s those wonderfully designed classes, its gradually escalating challenge, and its propulsive sense of adventure that will linger in my memory, rather than any of the guns I picked up, or any of the walls I hid behind. It isn’t People Can Fly’s best effort, but it is the studio’s DNA that makes Outriders more than just another run through the loot mill. 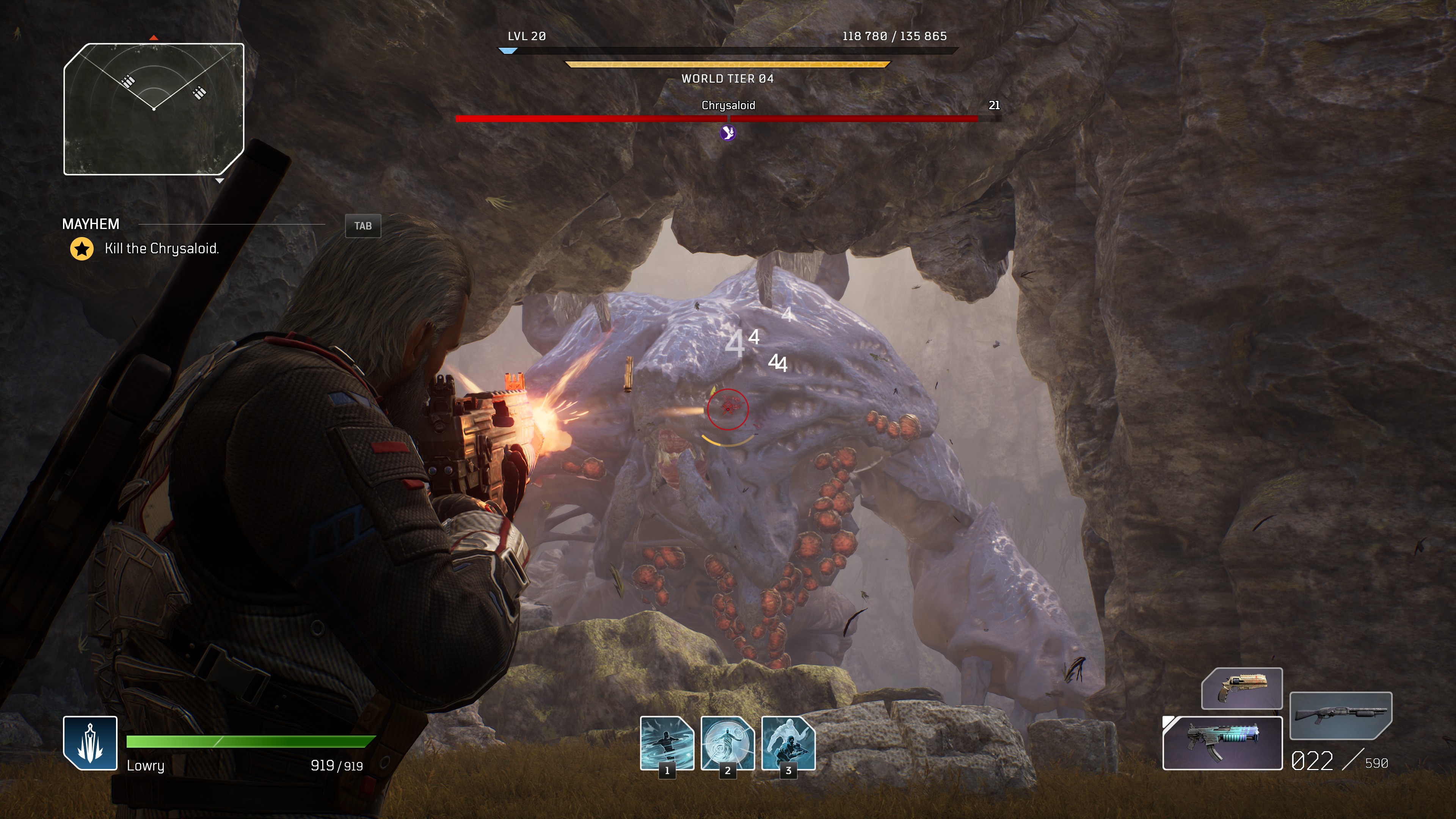